The American Academy of Pediatric Dentistry defines this procedure as the amputation of the pulp chamber while preserving the vitality of the radicular pulp which will be later treated with a medicinal product [34].
Pulpotomies in primary teeth are the most commonly used treatment when the pulp is cariously exposed, and the tooth appears both clinically and radiographically not infected. The rationale for completing a pulpotomy on a primary tooth is based upon the premise that by removing all or partial areas of the affected coronal pulp tissue, there continues to remain vital tissue in the remaining areas of the root canal. The goal is to maintain tooth vitality and normal pulpal activity. The material used to cover the remaining tissue should be bactericidal, compatible with the pulp and surrounding tissues; promote repair and healing of the pulp tissue; and allow the tooth to resorb without interference.
Using conventional vital pulpotomy methods, the tooth should usually be anesthetized prior to treatment. Presently, conventional treatment has seen less use of formocresol due to concerns about its safety and more emphasis on the use of mineral trioxide aggregate [35, 36]. MTA is composed of tricalcium silicate, bismuth oxide, dicalcium silicate, tricalcium aluminate, tetracalcium aluminoferrite, and calcium sulfate dihydrate. Nonchemical pulpotomy procedures were recommended by Dean et al. (2001) using electrosurgery and pulp therapy [6].

When the pulp of the primary tooth is determined to be non-vital, a pulpectomy may be an option when it is desirable to save a restorable primary tooth. Pulpectomy should be limited to teeth where there are no signs of systemic infection, bone loss, swelling, or chronic fistulas both clinically and radiographically. The goal is to remove all infected tissue in both the coronal and root portion of the primary tooth.
The anatomic morphology of primary molar root canals makes complete conventional root canals difficult to complete. If the primary tooth’s root canal shows signs of resorption and apical, bifurcation, or trifurcation bone loss and cannot be properly cleansed of all infected tissue, then endodontic (pulpectomy) treatment will most likely be unsuccessful.

Lasers and dentistry, the idea that light energy could be harnessed and brought into the oral cavity, first became available for dentists in 1989 with the introduction of the first laser approved for dentistry by the US FDA (United States Food and Drug Administration); this was a 3 W Nd:YAG (neodymium:yttrium-aluminum-garnet) laser developed by Meyers [37]. Since the introduction of the Nd:YAG laser (1064 nm), other lasers are now used to treat a variety of soft tissue procedures such as KTP 523 nm and in the past argon 514 nm; various diode lasers (from 810 nm to 1064 nm), erbium, chromium:YSGG (2780 nm) and erbium:YAG lasers (2940 nm), and CO2 lasers (9300 and 10,600 nm) have been used for the treatment of soft tissue dental problems.
The use of light energy creates a new potential for treating the pulp in primary teeth. Studies have investigated the possibility of using lasers for the pulpotomy procedure on primary teeth [38–41].
In 1996, Wilkerson reported in their study that after 60 days, the use of the argon laser for pulpotomies in swine showed that all pulps appeared to have normal vitality and pulpal healing [42].
The use of the Nd:YAG laser in pulpotomy procedures in primary teeth was reported to be successful in 1999 by Liu JF et al. [43].
In another study, Liu et al. (2006) compared the effect of Nd:YAG laser at 2 W (100 mJ, 20 Hz) for pulpotomy to formocresol (1:5), reporting a significantly superior clinical success of the laser group (97 %) in comparison with the formocresol (1:5) group (85.5 %) [44].
Odabas et al. (2007), using the same parameters, reported no statistically significant difference between the two groups: 85.71 % for the laser group compared to 90.47 % for the formocresol group at 12 months [45].
The use of CO2 for pulpotomy procedures was investigated by Shoji et al. (1985) which reported clinical success for pulp therapy [46].
Elliot et al. (1999), comparing the effects of the CO2 laser technique to formocresol therapy, found all samples similarly asymptomatic at both clinical follow-ups and histological evaluations, with a significant inverse correlation between the laser energy applied to the pulp and the degree of inflammation at 28 days [47].
Pescheck et al. (2002) reported favorable results using the CO2 laser for primary pulpotomy with clinical survival rate of 98 % [48].
Fitzpatrick et al. (1994) had already highlighted how the superpulsed mode was more successful than the continuous mode [49].
The Er:YAG laser has demonstrated a successful alternative to conventional pulp therapy. Kimura et al. (2003) reported success using the Er:YAG laser for pulpotomy [50].
Huth et al. (2005) compared four pulpotomy techniques: diluted formocresol, ferric sulfate, Er:YAG laser, and calcium hydroxide. Calcium hydroxide (87 %) showed a much lower success than the other groups, making the laser group (93 %) a valid system for pulpotomy [51].
Research completed in 2007 by Henson reported that the clinical and radiographic findings in an unpublished study at the University of Texas, San Antonio, Dental School suggested that therapy using the 2940 nm erbium laser was as effective as formocresol in treating pulpotomies in primary teeth [52].
In 2008, Kotlow published the results of over 5 years of using Er: YAG laser for pulpotomies with radiographic evidence of successful treatments [53].
In 2010, Mareddy et al. performed a histological evaluation of laser pulpotomies using the 810 nm diode laser and concluded that lasers appear to be an acceptable alternative for pulpotomies [54].

The following examples represent a selection of successful pulpotomies completed by the author using the Er:YAG dental laser. All the teeth treated in this study report were of children whose medical histories were completed by the parents and indicated they were health children. Pulpotomies selected were chosen from approximately 5000 different teeth as examples for laser pulpotomies which required vital pulp therapy due to mechanical or carious exposures, trauma, or teeth considered non-vital due to either previous traumatic injury or severe caries resulting in pulpal death.
All procedures were completed using a dental microscope (Global Technologies) and under rubber dam or using the Isolite ™ system of tooth isolation. Local anesthetics were used when needed (Septocaine 1:100,000) (Fig. 8.4). All patients, staff, and dentists wore appropriate laser glasses, and high-volume suction was used during the procedure. Once it was determined that the tooth required a pulpotomy, the chamber was opened to provide proper access to the anal orifices using conventional high-speed and slow-speed handpieces. Alternative method for opening non-vital pulp chamber would include using the Er:YAG laser (2940 nm, Fotona – PowerLase AT and LightWalker) at 12–15 Hz, 250–350 mJ, depending on the energy needed to ablate the enamel and/or dentin, with air and water spray on (20–22 cc/min), using a tipless handpiece (R02-H02).

Fig. 8.4
Isolite isolation
Pulpotomies and pulpectomies were then treated irradiating each canal for approximately 20 s with a 400 μm tip (Preciso tip) at 12–15 Hz and 50 mJ up to 80 mJ, with air-water spray on. The laser energy was directed at the opening of the canals for approximately 20 s per canal, repeated three times or until adequate hemostasis was achieved. A final filling includes the use of a resorbable material such as zinc oxide and eugenol in the canal and glass-ionomeric cement-composite material in the chamber for crown reconstruction. Patients were evaluated at 1 month and 6 months for clinical signs of any failure of pulpotomy. Failure rates appeared to be similar to conventional formocresol rates (Fig. 8.5a–d). The following cases were treated using an Er:YAG laser (Figs. 8.6, 8.7, 8.8, 8.9, 8.10, and 8.11.) 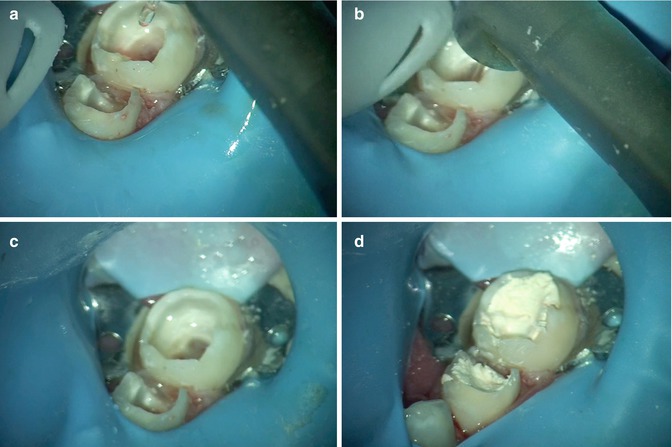 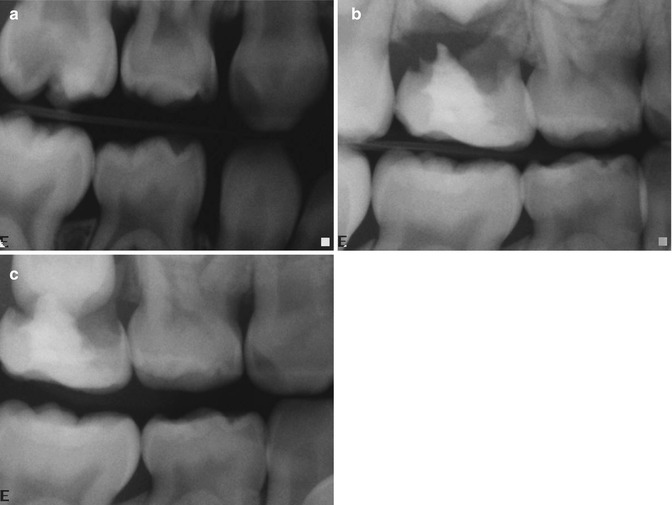