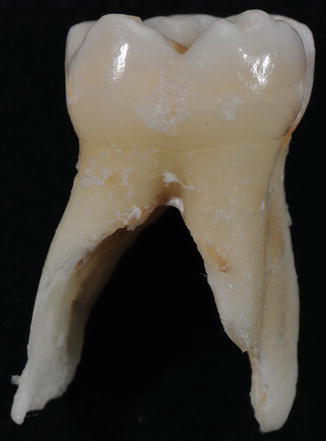 Permanent human teeth have a crown and one or more roots. The endodontic space, defined by radicular and chamber dentin, is very complex, and it is differently classified depending on crown-root relationship and morphology of the canals.
Weine (1996) classified the complexity of the endodontic system in four typologies while considering the relationships between pulp chamber, radicular canals and their apical termination [3] (Fig. 1.4).

Fig. 1.4
Weine’s classification of the endodontic system takes into account the relationships between pulp chamber, root canals and their apical termination [3] (Graphic drafts courtesy of Giovanni Olivi, Rome, Italy)
Vertucci (1984) defined instead eight basic typologies [4]. Later on, Vertucci’s classification was expanded to include other morphological classifications by Gulabivala et al. (2001 and 2002) [5, 6] and by Sert and Bayirili (2004) [7] (Figs. 1.5, 1.6 and 1.7). 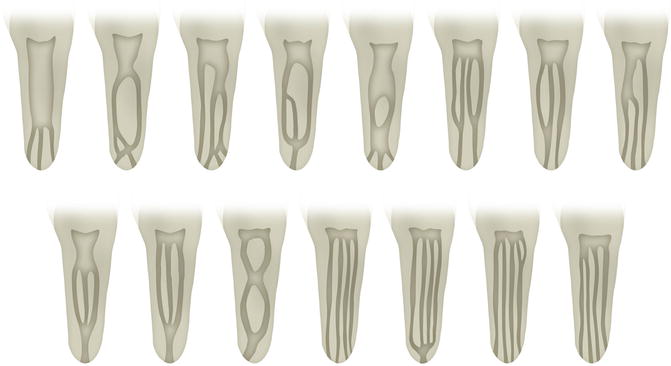 Fig. 1.7
Graphic representation of Sert and Bayirili’s morphological classification of endodontic system [7] (Graphic drafts courtesy of Giovanni Olivi, Rome, Italy)
Schneider [1971] analysed single-radicular human teeth and classified them depending on the degree of curvature in the root, as straight, with curvature less than or equal to 5°, with a moderate curvature between 10° and 20° and with a severe curvature between 25° and 70° [8]. Lautrou [1987] also described and classified the various morphologies of transverse sections of roots [9] (Fig. 1.8).

Fig. 1.8
Graphic representation of Lautrou’s classification of morphologies of transverse sections of roots [9] (Graphic drafts courtesy of Giovanni Olivi, Rome, Italy)
Zidell (1985) and Ingle and Taintor (1985), in addition to the degree of root and apical curvature, also considered the anatomical complexity, including the presence of bifurcations, the presence of additional channels and the presence of lateral and accessory channels [10, 11].
Various studies and texts later described the anatomy and morphology of permanent human teeth and their countless possible shapes [12–16].
In the paragraphs related to a single type of tooth, the age of eruption considered is that of Logan and Kronfeld, slightly modified by Schour and included in Ash’s text [13, 14]. The dimensions of human teeth reported in this textbook are instead taken from different texts [11, 17, 18].

The central upper incisor erupts (one per hemi-arch) at the age of six to seven, and the complete formation of the apical third is defined 2 or 3 years later. It has an average length of 22–23 mm.
The crown, with its triangular base, is about 10.5 mm long, and its base extends in a mesial-distal direction, corresponding to the tooth’s front edge, to about 9 mm, and its buccal-palatal dimension is 7 mm (Fig. 1.9).

Fig. 1.9
Upper central incisors: palatal view of the crown
The root is usually straight (75 %) but according to Ingle could present small curvatures in a small percentage. The root exhibits a radicular canal with side canals in more than 20 % of cases and frequently apical delta (35 %) [11].
The endodontic coronal space has also a triangular shape, especially in the area of the cervical radicular one-third, with the base towards the chamber wall and the narrower part palatally after which it gradually ends with a round canal until the apex.
The access cavity is triangular and reproduces the shape of the endodontic space (Fig. 1.10).

The upper lateral eruption (one per hemi-arch) occurs 1 year after the central incisor, and its complete formation takes approximately 3 years.
It is about 1 or 2 mm shorter than the central incisor and its mesial-distal dimension is smaller: about 7 mm and just 5.5–6 mm in the chamber-palatal side (Fig. 1.11).

Fig. 1.11
Upper lateral incisor: palatal view of the crown
Normally it presents only one radicular canal, straight in 30 % of cases, and frequently there is a distal curvature (53 %) with a small percentage of variation in other directions. It has an egg shape in the cervical area, with the tendency to become more round in the apical area, and the access cavity is consequently configured (Fig. 1.12).

The lower incisors, two per hemi-arch, are very similar to each other keeping some peculiarity.

The lower central incisors are the first permanent teeth to erupt in the mouths of the children, usually between 6 and 7 years of age, and they generally complete their radicular and apical formation at 9 or 10 years old. The lower central incisor is about 21.5 mm long. The apical third of the root is straight in 60 % of cases and bends towards the distal in 23 % of the cases.
The crown has a trapezoidal shape with the major base corresponding to the incisal edge and the minor base that continues with the cervical third of the root. Its half distal dimension is 5.5 mm in the area of the incisor, in correspondence to the next contact point, and gradually decreases to 3 mm at cervical level (Fig. 1.13). 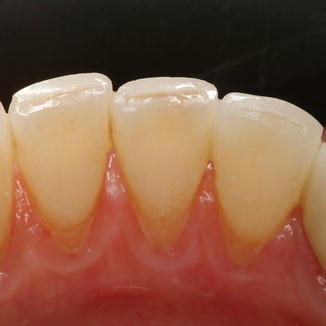 Fig. 1.13
Lower incisors: lingual view of the crowns
The lower central incisor presents a buccal inclination. The root has a second canal positioned lingually to the principal canal in 18–23 % of cases [12, 13] (Fig. 1.14).

Lower lateral incisor is similar to the central one, but a bit bigger by about 1 mm, and it normally comes out 1 year after the lower central incisor and completes its formation in 3 years.
The study of the root confirms the presence of two canals in 15 % of cases.
The access cavity of lower incisors is designed in a buccal-lingual direction in order to search for the second canal, positioned lingually (Fig. 1.15a–c).

Upper canine, one per hemi-arch, comes out at the age of approximately 11–12 and completes its radicular formation 3–4 years later.
It is the longest tooth in human arch (about 27 mm or more).
The crown has a rhomboidal shape with a peculiar sharp cusp which on the vestibular side divides the mesial and distal sides of the crown. The crown is 10 mm high (long) and has a maximum mesial-distal diameter of 7.5 mm at the proximal contact point, and it undergoes cervical reduction to 5.5 mm. The buccal-palatal diameter is wider (8 mm), and it maintains itself at 7 mm at the cervical level because of the presence of a noticeable cingulum (Fig. 1.16). 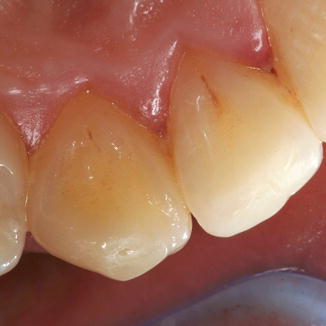 Fig. 1.16
Upper cuspid: palatal view
The long root, like the crown, is narrow in the mesial-distal dimension and more pronounced in the buccal-palatal dimension. There is almost always just one radicular canal, with localized side canals at various heights in about 24 % of cases. The apical third is straight in 40 % of cases, and it is often bent towards the distal (32 %) and/or towards the chamber (13 %) (Fig. 1.17). 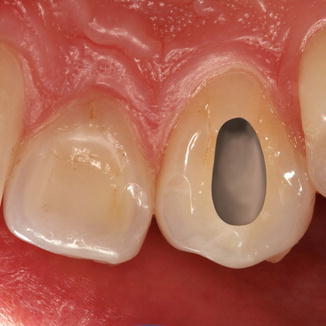 Fig. 1.18
(a, b) Upper cuspid: buccal and proximal view
The endodontic space, at the level of the cervical one-third and the radicular middle one-third, has an oval shape in the buccal-palatal dimension; frequently two canals are present with the tendency to become one common round canal in the apical one-third (Fig. 1.18a, b). 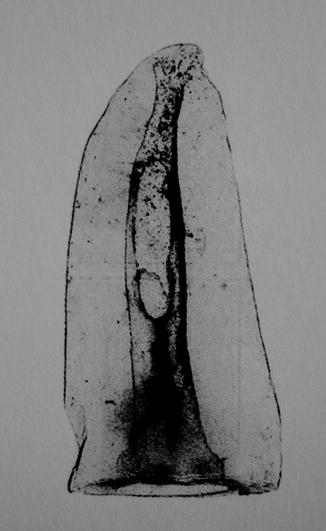 Fig. 1.19
Anatomical tables from Hess and Keller: the endodontic space of upper cuspid at the level of the cervical one-third of the canal shows a unique oval-shaped canal, while at the middle one-third, it is divided into two different canals and frequently becomes a single round canal at the apical one-third [2] (Image reprint with permission from Perrini [1])
The access cavity of the pulp chamber has an oval shape, going from the cusp to the cingulum of the coronal cervical one-third in order to access the radicular space without dental interference which could force the instruments creating ledges or transposition of the apical foramen (Fig. 1.19).

The lower canine, one per hemi-arch, erupts approximately 8–10 months before the upper and completes its formation in 3–4 years.
The crown is 11 mm long and its half distal diameter is narrower than the upper (7 mm), and it reduces itself to 5.5 mm at cervical level. The maximum buccal-lingual diameter is 7.5 mm wide and it reduces itself minimally at cervical level. The cervical lingual cingulum is less pronounced than the upper one (Fig. 1.20). 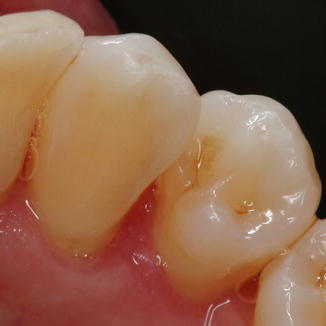 Fig. 1.20
Lower cuspid: lingual view of the crown
The lower canine is about 27 mm long, and it presents two separate roots in 6 % of cases or two canals in just one root, split by an isthmus, with a common or two separate apices (Fig. 1.21). In 20 % of cases the apical one-third has a distal inclination (Fig. 1.22). 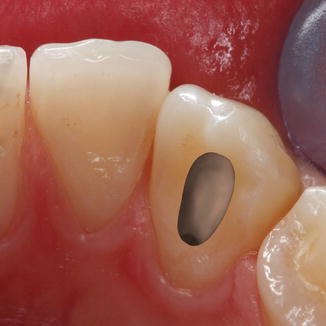 Fig. 1.22
Anatomical tables from Hess and Keller: the endodontic space of lower cuspid shows two different canals connected by an isthmus at the coronal one-third; the canals end in the same unique foramen at the apical one-third [2] (Image reprint with permission from Perrini [1])

Fig. 1.23
(a, b) Lower cuspid: buccal and proximal view
The endodontic space is oval shaped in buccal-lingual direction for two one-thirds of the radicular length, and then gradually it assumes a round shape.
The access cavity of the pulp chamber must have an oval shape in the buccal-lingual direction, from the cusp to the cingulum (Fig. 1.23a, b).

They are two per every half (hemi-)arch, they erupt at the age between 10 and 12 years and their radicular formation is complete after 3 years. They replace the primary molars.
The first and the second premolars have a similar crown but a different morphology.

The first upper premolar erupts when the child is about 10–11 years old. It is about 21–22 mm long and its buccal-palatal dimension is 9 mm, while the mesial-distal one is 7 mm. It has two cusps, a buccal and a palatal one, which is a bit shorter (about 1 mm). The endodontic space is determined by the shape and the dimension of the external crown (Fig. 1.24). 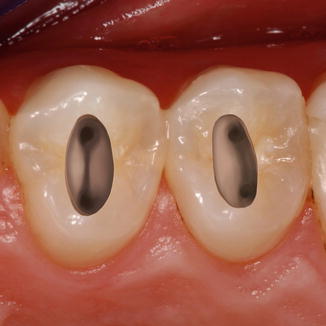 The second upper premolar erupts at the age between 10 and 12 years. It is very similar to the upper first premolar, both in dimension and in the shape of the crown. But there are some main radicular differences, presented in three variations:
Tags: Lasers in Endodontics
Sep 10, 2016 | Posted by mrzezo in Endodontics | Comments Off on Endodontic Morphology and Anatomy of Human Teeth
Premium Wordpress Themes by UFO Themes
WordPress theme by UFO themes