Special Clinical Conditions That AWDA Can Be a Solution

(1)
Faculty of Dentistry Department of Orthodontics, University of Marmara, Istanbul, Turkey
(2)
Henry M. Goldman School of Dental Medicine Department of Orthodontics & Dentofacial Orthopedics, Boston University, Boston, Massachusetts, USA
Alveolar Distraction in Cystic Lesions: Case 1
Diagnosis
Treatment Plan
Orthodontic Treatment
Surgery
Distraction
Alveolar Distraction Protocol in a Large Bone Defect Because of Iatrogenic Reasons: Case 2
Some tumoral, cystic, or inflammatory lesions are treated with total excision and reconstruction of the affected area. The treatment in such conditions is performed in two steps.
In the first step, the pathologic lesion is removed completely, with some healthy tissue surrounding it, and bleeding in the peripheral tissues is initiated to achieve healing of the area.
In the second step, the reconstruction of the area has to be done. The reconstruction process aims restoration of the area with tissues of characteristics similar to the original morphology. Bone grafting is a well-known procedure, which has been of use for a long time. Generally, autogenous bone grafts or scaffolds are used to restore the defects. In such treatment approaches, there are common problems observed in many cases. First of all, donor site surgery is performed to obtain the graft, and it creates another wound area. Second, it is hard to obtain enough soft tissue coverage with local soft tissue on the grafted region. Therefore, labial, buccal mucosal tissues, or tongue can be used for donor site, which are far from covering the expectations.
Alveolar distraction osteogenesis could be an effective method for restoring those huge defects. The major advantage of the technique is that tissues of similar origin are used for restoration of the defective region, which increases the success rate of the treatment.
In this chapter, we will present two cases: First case had a giant cell granulaoma on the alveolar region, and the reconstruction was done completely after the excision of the lesion. Second case had maxillary osteomyelitis with huge maxillary alveolar defect and was treated with the same distraction approach.

A 19-year-old female patient applied to our clinic with the main complaint of wide diastema in between the lower central incisors, together with purple discoloration on the gingiva (Fig. 8.1a–h). The patient did not suffer from any pain symptoms. However, she complained about short-term increase in diastema width and pressure feeling on the adjacent teeth. 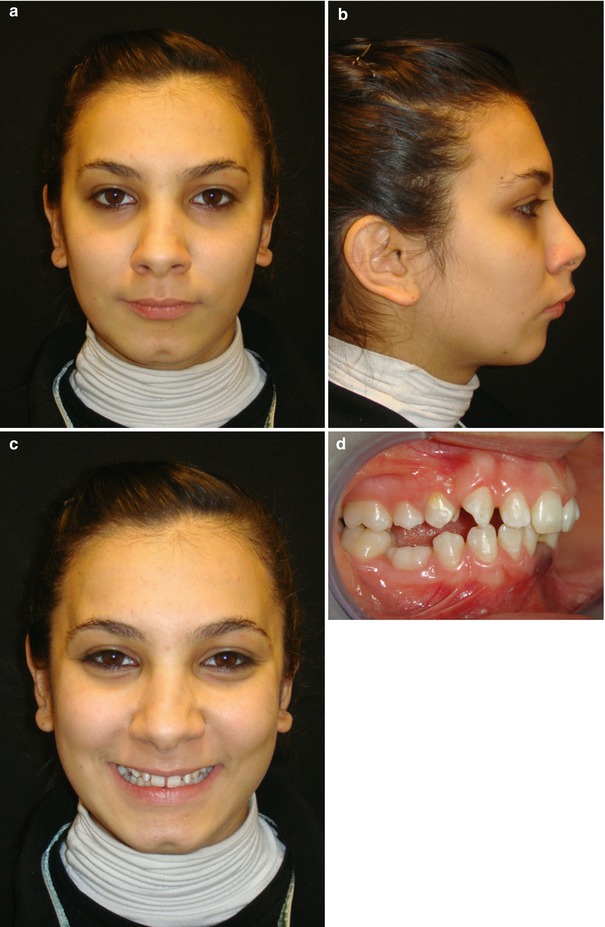 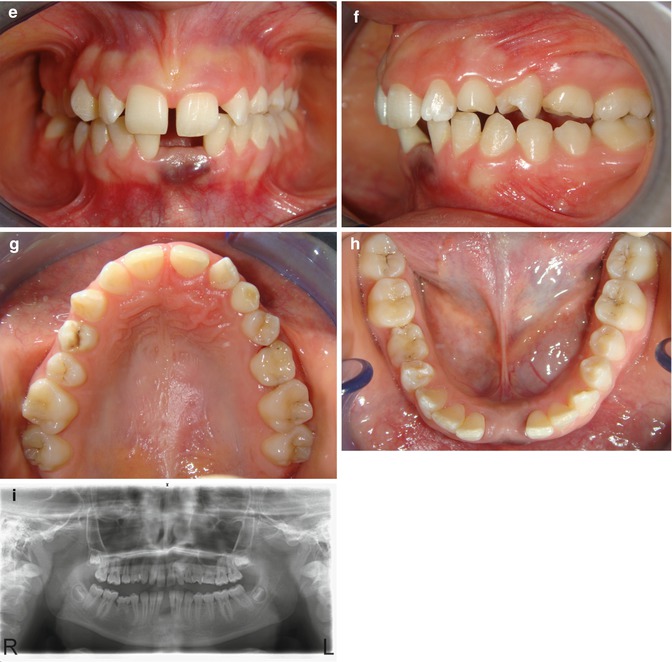 This clinical situation made us think about the peripheral giant cell granuloma, which is found most frequently on the gingiva of young females and may exhibit brownish to bluish exuberances of firm or soft consistency. Additionally, it may exhibit limited expanse and may erode the alveolar bone. It is also known to be localized in the anterior region of the mandible, compared to the maxilla. A typical characteristic of giant cell granuloma is the proliferation of the lesion along the periodontal ligament space.
In radiographic examination, the region involving the lesion was characterized with bowl-like bone defect (Fig. 8.1i). The final evaluation of the case showed that the clinical features of the case were in accordance with the peripheral giant cell granuloma.

Total excision of the lesion, together with the involved incisors, was planned for the initial treatment. However, the resulting gap had to be repaired by using the archwise distraction technique. Before the surgical intervention, preoperative orthodontic treatment was initiated.

Teeth were leveled and aligned with edgewise appliance. Spaces of 2 mm were created between the lower canines and the first bicuspids by using push coils to make the vertical osteotomies easier (Fig. 8.2). Right after the space opening, the braces were removed and AWDA appliance was constructed (Fig. 8.3
Only gold members can continue reading. Log In or Register to continue