A 16-year-old female patient presented with absence of the premaxilla and bilateral complete cleft lip and palate (Fig. 7.1). The etiology was uncertain. The treatment plan was reconstruction of the premaxilla and correction of the sagittal jaw relationship, using the alveolar distraction protocol to improve the patient’s facial profile and appearance. Treatment started with rapid maxillary expansion, followed by leveling and alignment of the dental arches with orthodontic treatment (Fig. 7.2). A 2 mm space was left between the maxillary second premolar and first molar to avoid root exposure during osteotomy. At the end of the preoperative orthodontic treatment, braces were removed, polyvinyl siloxane impression was taken, and Cr–Co appliance was fabricated (Fig. 7.3). During the appliance fabrication, thermal retainer was given to keep the teeth retained. 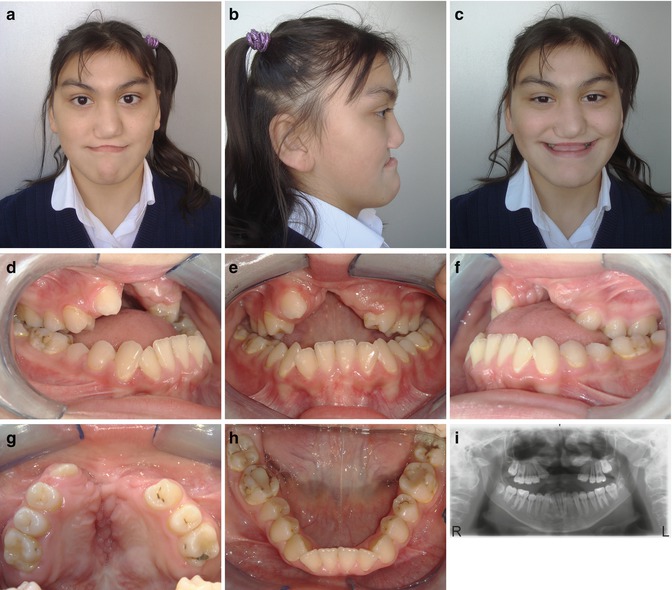 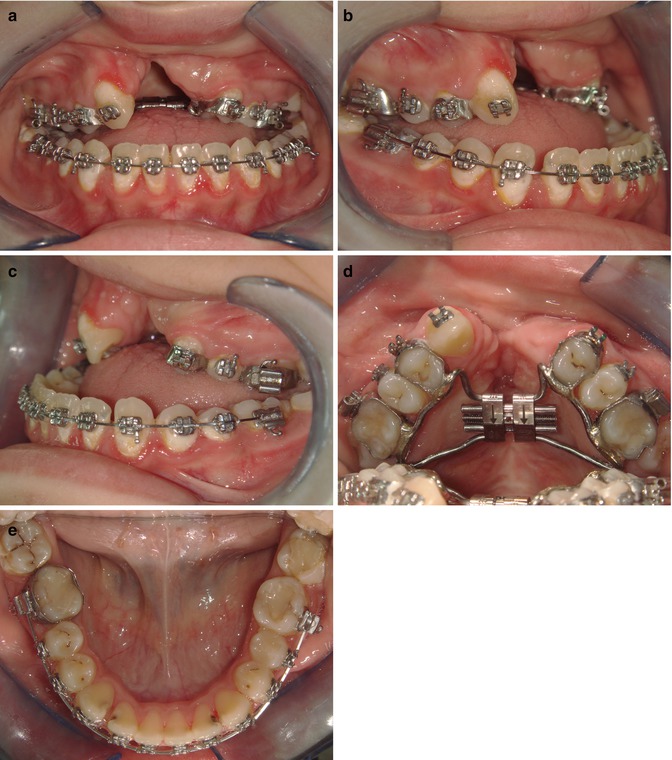 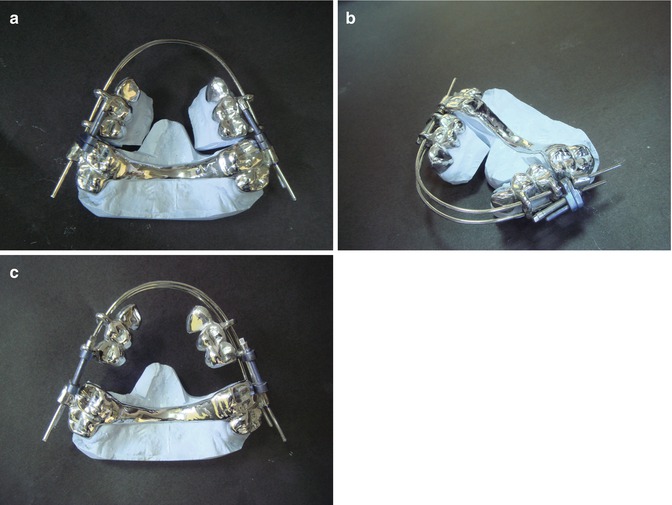 Fig. 7.3
(a–c) Fabricated appliance on the model
After the completion of appliance fabrication, it was cemented the day before the surgery. Surgery was performed under general anesthesia. The segments were mobilized by making vertical incisions between the maxillary second premolars and first molars, followed by horizontal osteotomies above the roots. During this process, the palatal mucosa was left intact. Arches and distractors were inserted intraoperatively, and the distractors were activated with five full turns (5 mm) to observe the mobility of the discs. The distractors were then closed, the segments were ligated tightly, and the flaps were sutured. After a 5-day latency period, activation was started at the rate of one half-turn (0.5 mm), twice a day. The patient was monitored weekly until the two segments contacted at the midline (Fig. 7.4). Activation was continued bilaterally until the desired amount of premaxillary augmentation, including 30 % overcorrection, was achieved (Fig. 7.5). 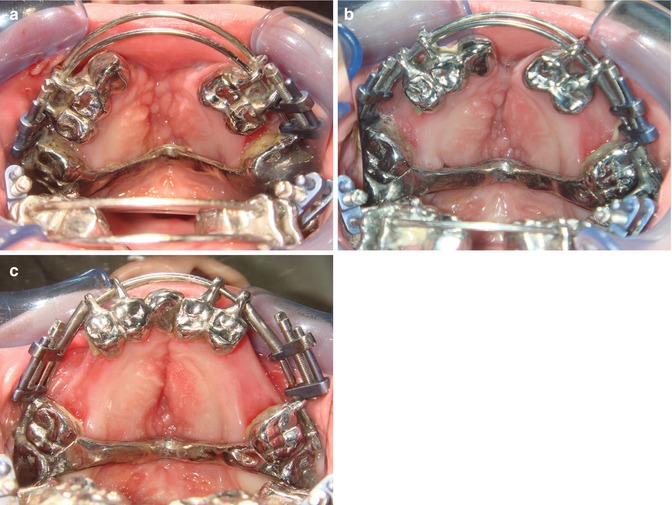 Fig. 7.4
(a) Distraction initiated. (b) Continued distraction. (c) Segments connected in the middle 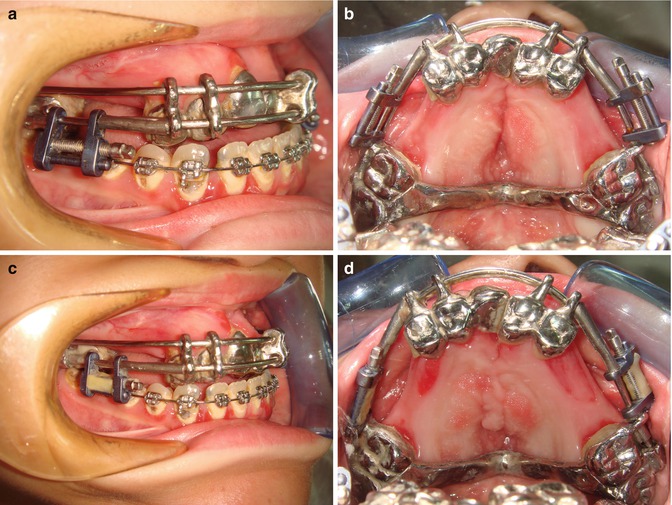 Fig. 7.5
(a, b) Before sagittal correction. (c, d) After sagittal correction
After a 2-month retention period with the appliance in situ, secondary surgery was performed to restore the nasal floor, which was congenitally absent. This restoration required a large bone graft, which was harvested from the iliac bone. The nasal floor was repaired with a single bone graft shaped to fit the defect, and the remaining graft material was chipped and inserted between the alveolar segments to achieve complete closure.
At the end of the 2-month retention period, the metal crowns were removed and the teeth were prepared for prosthetic restoration. At the same time, provisional acrylic bridges were placed to allow for the consolidation of the regenerated alveolar bone. Three dental implants were placed in the newly regenerated bone on each side. After a 3-month osseointegration period, the patient was referred to a prosthodontist for final restoration.
All maxillary teeth, except the second molars, were restored prosthetically to maintain the treatment results and improve esthetics (Fig. 7.6). 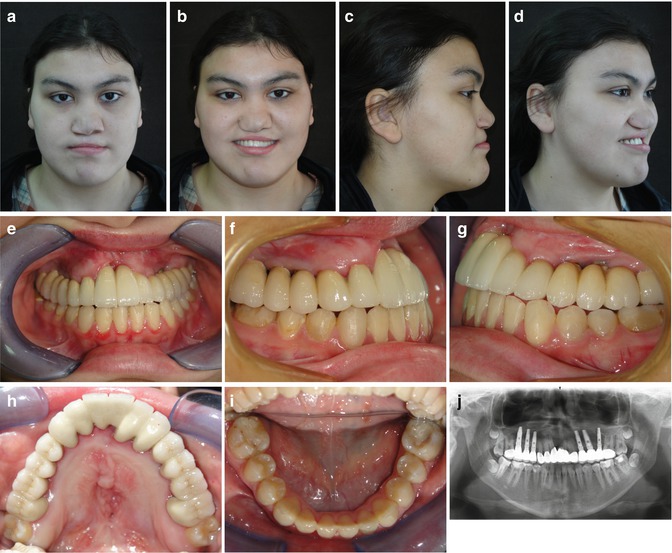 Fig. 7.6
Only gold members can continue reading. Log In or Register to continue