Distraction with Custom-Made Appliances on a Straight Vector

(1)
Faculty of Dentistry Department of Orthodontics, University of Marmara, Istanbul, Turkey
(2)
Henry M. Goldman School of Dental Medicine Department of Orthodontics & Dentofacial Orthopedics, Boston University, Boston, Massachusetts, USA
Maxillary Segmental Distraction Osteogenesis Procedure with a Custom-Made Appliance
Treatment of Unilateral Complete Cleft Lip and Palate Patient with Three-Step Alveolar Distraction
Step 1
Step 2
Step 3
After Distraction
Conclusion
Vertical Distraction in Alveolar Bone Deficiency
Distraction Protocol
Surgical Procedure
Distraction Procedure
References
After the introduction of the distraction osteogenesis procedure to the alveolar region, this method is used in the treatment of many different cases (Chin and Toth 1996). Mainly, the method is preferred in the reconstruction of the alveolar bone in width and length for implant restorations, closure of cleft defects in patients with cleft lip and palate, and restoration of adopted bone defects after tumoral resection.
Prior to this method, the routine procedure for the treatment of alveolar defects of several origins was bone grafting. Grafting methods are still used as a treatment modality for such cases; however, the resorption risk of the graft material as well as the difficulties confronted in covering the graft with soft tissue make distraction osteogenesis a preferential alternative to contemporary approaches.
In cases with alveolar clefts, this method is applied with success for a long time (Liou et al. 2000). Usually, custom-fabricated simple distractors are used for the distraction of alveolar bone in such cases. The alveolar bone that is planned to be distracted is mobilized with vertical and horizontal osteotomies, followed by distraction with the routine protocol of latency and 1 mm/day distraction until the closure of the defect.
As the alveolar tissues have a curvilinear configuration, the linear distraction may not always be sufficient to restore the area with a single appliance and a distractor. Therefore, the restoration of the alveolar processes may require usage of various appliances and several reoperations of patients. This is the main disadvantage of linear distraction when used in the reconstruction of curvilinear structures.
Another indication of alveolar distraction is the preparation of the alveolar region for implant restoration (Hidding et al. 1998; Rachmiel et al. 2001). Many distractors are available on the market for vertical distraction of the deficient alveolar bone, and the technique is used regularly for the acquisition of new bone.
Linear distraction with custom-fabricated tooth-borne appliances are also used for the distraction of teeth groups or ankylosed teeth, or for the distraction of submerged implant restorations (Alcan 2006; Isaacson et al. 2001; Kofod et al. 2005).
In this chapter, two cleft palate cases treated with linear distraction and another case with submerged implant restoration will be presented.

S.C. was a 16-year-old female with CLP. Her medical history revealed that she had several dental and surgical treatments, including face-mask therapy and orthognathic maxillary advancement surgery besides all the treatments and surgeries related to CLP treatment. The results of clinical and radiological evaluation of the patient presented that she had a high-angle vertical growth pattern, Class III sagittal skeletal relationship characterized by maxillary retrognathism, and a big mandible. She also had increased upper and decreased lower incisor inclinations. A concave profile was obvious due to midface deficiency (Fig. 5.1).

Fig. 5.1
Pretreatment extraoral and intraoral pictures. (a) Facial picture. (b) Facial picture smiling. (c) Lateral extraoral picture smiling. (d) Intraoral frontal picture. (e) Right intraoral picture. (f) Left intraoral picture. (g) Maxillary occlusal picture. (h) Mandibular occlusal picture
Considering the evaluations done, a treatment plan was constructed. A consultation with the surgeon revealed that secondary orthognathic surgery approach might end up with velopharyngeal insufficiency, deterioration of hypernasality, and also the risk of relapse, because of the overstretching of the stiff mucosa and the scar tissue which would lead us to unfavorable results. Therefore, we planned to make a comprehensive treatment including distraction osteogenesis.
We started the treatment by bonding maxillary and mandibular dental arches. After leveling and alignment, axial inclinations of the lower anterior teeth decompensated by proclination, which exaggerated the negative overjet. The upper arch was also aligned, and a space was created between the roots of the teeth neighboring the osteotomy line to provide a more comfortable working space for the surgeon.
At the end of the preparatory orthodontic procedure, maxillary braces were removed. To maintain the achieved situation, an alginate impression was taken, and a thick clear retainer was constructed and inserted immediately after debonding. At the same time, a second impression was taken to construct the tooth-borne distractor.
A chromium–cobalt cast was made for each three segments (one anterior and two posterior segments). Anterior segment covered from the last bicuspid from one side to the last bicuspid on the other side. Posterior segment contained one molar on the left and two molars on the right side. After the cast preparation, a vertically oriented 11 mm hyrax screw was soldered to create an anterior–posterior directed force vector. The screw was positioned to incline downward in the anterior part to avoid bite opening during distraction (Fig. 5.2). The custom design helps us to use it in every malocclusion and change the vector of forces as needed. The device can easily be prepared by an orthodontist or a technician. It is hygienic, comfortable, nontraumatic, and allows oral functions. It is a noninvasive appliance, and there is no need for a secondary surgical procedure to remove it. 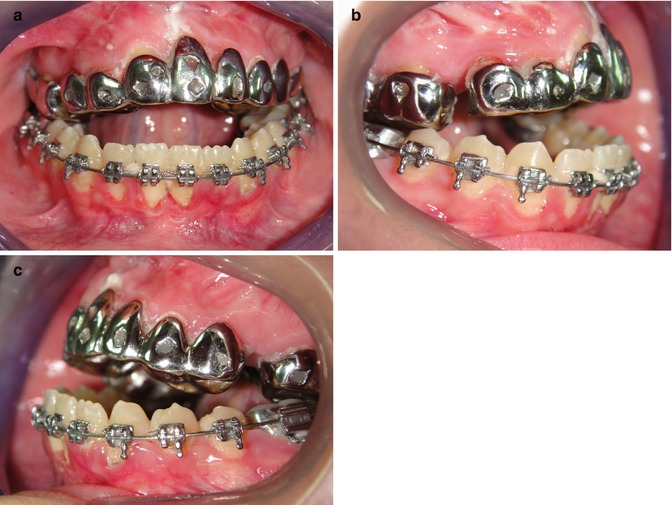 Fig. 5.2
Predistraction intraoral pictures with the distractor in the mouth. (a) Intraoral frontal picture – metal casted appliance placed in the mouth. (b) Right lateral picture. (c) Left lateral picture
We bonded the appliance with glass ionomer cement. Then, the patient and the parents were briefed about the screw activation. The operation was performed under general anesthesia. During the operation, a horizontal osteotomy was made starting from the apertura piriformis, extending up to the mesial end of the molars. Then, vertical cuts from both sides were performed in between the molars and premolars, and this osteotomy was continued through the palate to release the anterior part of the maxilla. The last part of the osteotomy was made by keeping the palatal mucosa intact to maintain the vascularization of the anterior segment. A screw activation up to 2 mm (8 × ¼ tours) was done during the operation to separate the segments (Fig. 5.3). 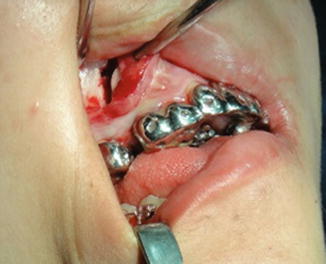 Fig. 5.3
Vertical and horizontal osteotomies for releasing of the anterior maxillary segment
As suggested in Ilizarov’s method, after 5 days of latency period, the patient was instructed to activate the screw twice a day (0.5 mm/day). The patient was monitored every week during distraction, and the activation was continued until the achievement of the normal sagittal relationship with the lower arch, which lasted 18 days. The original appliance was left in situ for consolidation of the regenerated bone (Fig. 5.4).

Fig. 5.4
Postdistraction intraoral pictures. (a) Right intraoral lateral picture. (b) Left intraoral lateral picture
The surgery of the patient was performed by a plastic surgeon. There were no problems with bleeding, infection, dental injury, avascular necrosis, or gingival injury. Blood transfusion was not required. During the distraction process, no complications occurred related to intraoral device, including pain, discomfort, or loosening.
Patient had a dramatic improvement after distraction of the anterior segment of the maxilla (Fig. 5.5).

Fig. 5.5
Only gold members can continue reading. Log In or Register to continue