The main purpose of fracture healing is to reestablish the structural integrity of the injured bone (McKinley 2003). The procedure takes place in two distinctive ways (Fig. 3.1): 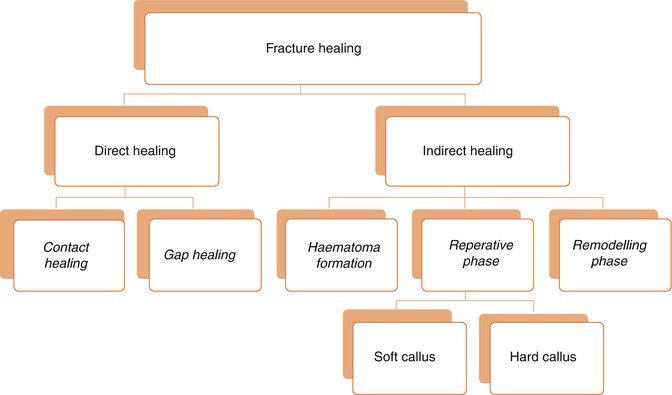 Fig. 3.1
Fracture-healing diagram
1.
Direct (Primary) fracture healing: Direct cortical healing of the two fracture ends of a bone. Direct healing does not commonly occur by a natural process. This process occurs between rigidly opposed cortical fracture ends, which is mostly possible if there is open reduction or internal fixation surgery of the fracture fragments, resulting in a substantial decrease in interfragmentary strain (Marsell and Einhorn 2011).
2.
Indirect (Secondary) fracture healing: It is the most common type of fracture healing, which involves healing processes within the bone marrow, periosteum, and the soft tissues surrounding the bone. It does not require direct contact of fragments or rigidly stable conditions of the fracture fragments.

Primary healing can occur through contact or gap healing.
In this type of healing, the site is filled by intramembranous bone formation without the mediation of the cartilage phase (Griffon n.d.). Lamellar bone is formed perpendicular to the long axis.

This most commonly seen fracture healing form consists of both endochondral and intramembranous bone healing (Gerstenfeld et al. 2006; Marsell and Einhorn 2011). It occurs in four consecutive phases after the impact causing the fracture: (1) hematoma formation–inflammation, (2) soft callus, (3) hard callus, and (4) remodeling. It should be stressed that these phases overlap each other and there are no distinctive borders between.
The impact causing discontinuity in the bone architecture also causes disruption of the blood vessels, and consequently leads to the formation of a hematoma, which can be considered as the initiating phase of the regeneration process.

Damage to neighboring blood vessels may occur, resulting in fracture hematoma. Bleeding originates from the medullary cavity and periosteum as well as from the soft tissue and muscle injuries (Wraighte and Scammell 2007). As a result of bleeding, coagulation initiates, leading to fracture hematoma which activates the immune cells that are located within the evolving hematoma (Kolar et al. 2010).
This first phase promotes modulation and osteoinduction of local cells and is a source of signaling molecules (IL-1, IL-6, and TNF- α), which induce a cascade of cellular events that initiate healing. The expression of these signaling molecules peaks within 24 h and decline to nearly undetectable levels by day 3 (Cho et al. 2002). These cytokines are secreted by macrophages, inflammatory cells, and mesenchyme-originated cells, and have chemotactic effect on other inflammatory cells. They are active in the recruitment of fibrogenic cells to the injury site (Kon et al. 2001).
At the same time, thrombin and subendothelial collagen activate platelets, which results in release of platelet derived growth factor (PDGF) and transforming growth factor-β, which play a role in initiating fracture repair. These factors induce mesenchymal cell migration, activation and proliferation, angiogenesis, chemotaxis of acute inflammatory cells, and further aggregation of platelets. Simultaneously, BMPs not only are released from the bone matrix but also are expressed by recruited primary mesenchymal cells. During the subsequent days, MSCs proliferate and differentiate into a chondrogenic or osteogenic lineage. During this early phase of events, angiogenesis also takes place, and this is a prerequisite for further progression of the regeneration cascade. While callus are developing, vascular ingrowth is controlled by FGF, VEGF, and angiopoietin 1 and 2. During the initial periods of fracture healing, angiopoietin 1, and during endochondral and bone formation, VEGF, have been proposed to be induced (Dimitriou et al. 2005). Next phase is the reparative phase, which involves both soft and hard callus formation.

This phase becomes active within the first few days after fracture and persists for several months. Endothelial cells in the marrow transform to polymorphic cells and begin to express an osteoblastic phenotype and form bone. Osteoprogenitor cells (OPCs) are already present in the area under the periosteum, ready to begin intramembranous ossification. Primitive MSCs express BMPs on the first day. BMPs begin the differentiation of OPCs into osteocytes. It seems that BMPs 2, 6, and 9 are important in the differentiation of pluripotent MSCs into OPCs, and then BMPs 2, 4, 7, and 9 further differentiate them to become osteoblasts. Most of the BMPs are then able to differentiate osteoblasts into osteocytes, excluding BMPs 3 and 12. Bone repair starts at the peripheral region of the fracture site. Inner part of the periosteum (subperiosteal area) starts to generate intramembranous woven bone (hard callus) on the well-vascularized area of the cortex from day 2 to day 5. At this time, proliferation of OPC and undifferentiated MSC is increased. However, on the fracture site, damage to the blood supply causes hypoxic tissue generation, which induces cartilage formation by MSCs (Shapiro 2008).
Between the bone ends, in the soft callus, early cartilage formation begins. Undifferentiated MSCs begin to proliferate by day 3. Between days 4 and 7, osteonectin (adhesion molecule) starts to become more pronounced. On day 5, there is evidence of increased expression of mRNA for type II collagen from the cells that later acquire a chondrocytic phenotype.
From day 6 to day 10, osteocalcin is expressed in the hard callus. In both the soft and the hard callus, there is high cellular proliferation and vascular infiltration deeper into the callus starts on this phase. Osteopontin is present in both the osteocytes and the OPCs at the junction between the hard and soft callus. In the soft callus, chondrocytes begin to proliferate. Type II collagen mRNA expression peaks at around day 9. Other minor collagens appear. Adhesion and migration molecules, especially fibronectin, are found in the fibroblasts, chondrocytes, and ostoeblasts. In days 11–20, in the areas of hard callus formation, cellular proliferation ceases. The predominant collagen type is type II, but expression of mRNA for collagen type II is absent. Fibronectin levels decline by day 14. In the soft callus, the cartilage begins to calcify. There is “budding” of hypertrophic chondrocytes. The matrix vesicles release calcium and enzymes. The soft callus takes on the structure of a growth plate, with primary and secondary spongiosa. Since the callus with cartilaginous and fibrocartilaginous origin stabilizes the fracture site, it can be considered as an ideal environment for the bone formation to be established on the fracture area.
The soft callus is very weak in terms of resistance to movement and requires adequate protection in the first 4–6 weeks.
From days 21 to 25, there is no more cellular proliferation. In the hard callus area, the structure is now woven bone. In the soft callus, chondrocytes begin to undergo apoptosis, and there is some cellular necrosis. Solid union with woven bone is seen by around 35 days. Remodeling and formation of lamellar bone follow “Reprinted from Phillips AM (2005) Overview of the fracture healing cascade. Injury 36(Suppl 3):S5–S7) with permission from Elsevier”

Following callus calcification, immobilization of the fracture is completed. From the examiner side, fracture can be considered as healed. After initial calcification, remodeling starts, which is the replacement of calcified cartilage and woven bone with lamellar bone. This phase continues for a long time period; however, adequate strength is typically reached in 3–6 months (Kalfas 2001).

Distraction osteogenesis procedure is based on the bone healing as well. It actually can be defined as a modification and deliberate direction of bone healing on patients’ favor. However, DO differs from normal bone healing in two basic aspects: (1) it has the advantage of having a controlled microtrauma; and (2) the ossification mechanism is membranous, not endochondral (Bouletreau et al. 2002).
As previously mentioned in the phases of bone healing, distraction osteogenesis procedure also consists of three sequential phases after the osteotomy and distraction appliance fixation: (1) latency phase, (2) distraction phase, and (3) consolidation phase.