Hippocrates was the first to use repositioning and stabilization techniques of bone fractures in written history. Closer to our date, Codivilla was a pioneer to apply bone elongation techniques, who in 1905 published a case report of femoral extension using axial forces of distraction (Codivilla 2008) (Fig. 1.1). However, the distraction osteogenesis in modern way was first applied by Gavril Ilizarov (Fig. 1.2), the Russian surgeon who developed innovative devices for skeletal fixation and osteotomy that deliver minimum trauma to the periosteum and to the bone marrow (Fig. 1.3) (Ilizarov 1989a, b, 1990; Ilizarov et al. 1978). At the end of World War II, he started to treat returning soldiers with serious fractures in scope of the time. He could only facilitate prolonged treatment of fractures with cast and skeletal traction back then. These conditions made him think of a new method to expediate the treatment time of fractures. In 1950 (Kurgan, Siberia), he designed the first version of his apparatus, for which he obtained approval of the design in 1954 (Rozbruch and Ilizarov 2007). His studies set a landmark for distraction osteogenesis and determined the protocols for the technique. They are still used as the main reference for the studies in the field.

Fig. 1.1
(a) A diagram that shows Codivilla’s apparatus at work. (b) A photograph which represents the lower part of the apparatus (Reprinted with permission from Codivilla (2008)) 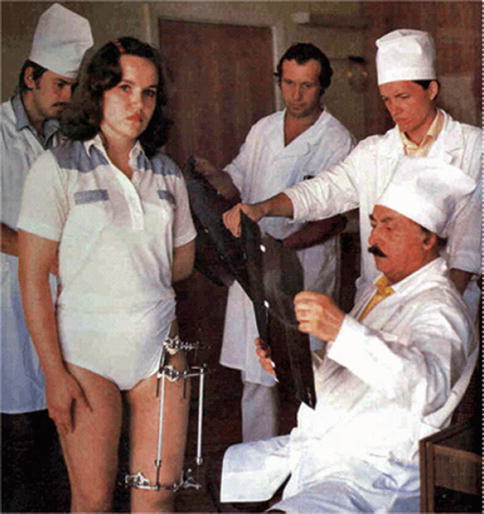 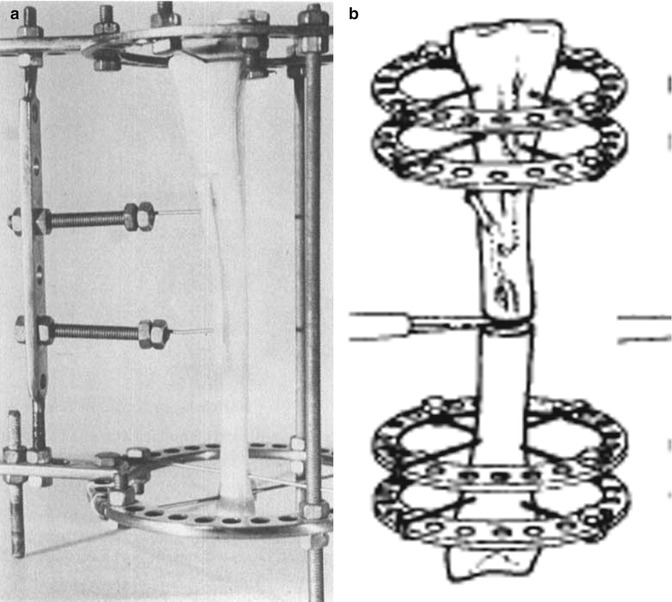 Fig. 1.3
(a) The Ilizarov apparatus configuration applied on the tibia cortex. (b) Four-ring configuration of Ilizarov apparatus with tensioned wires (Reprinted with permission from Ilizarov (1989a))
The time to transfer the knowledge gained from distraction of the long bones to craniofacial region took 40 more years. McCarthy et al. were the first to apply the technique to the mandible in a modern manner (Fig. 1.4) (McCarthy et al. 1992). However, the primitive versions of distraction started much earlier with dentofacial traction techniques.

Fig. 1.4
(a) Position of the distractor during mandibular lengthening. (b) McCarthy’s predrilled osteotomy technique (Reprinted with permission from McCarthy et al. (1992))
The first example of the method can be considered as the one described by Dr. Angell in 1860 (Fig. 1.5). He used a threaded jackscrew, which can be considered as the first version of Hyax screw attached to both premolars on one side and second premolar on the other side. The appliance was activated by the patient for 2 weeks. At the end of the procedure, sufficient transversal expansion was achieved and enough space was gained to fit the lateral incisor to the arch. There was also a space development in between the central incisor, which was a sign for maxillary sutural separation (Angell 1860
Only gold members can continue reading. Log In or Register to continue