(1)
Faculty of Dentistry Department of Orthodontics, University of Marmara, Istanbul, Turkey
(2)
Henry M. Goldman School of Dental Medicine Department of Orthodontics & Dentofacial Orthopedics, Boston University, Boston, Massachusetts, USA
Class II Correction by Anterior Alveolar Distraction: Case 1
Treatment Plan
Treatment Progress
Surgical Protocol
Distraction Protocol
Results
Class II Correction by Anterior Alveolar Distraction: Case 2
Treatment Plan
References
Class II malocclusion is a condition frequently seen in orthodontic practice, and it constitutes 27 % of all orthodontic problems (Angle 1899, 1900). It is characterized by maxillary excess, mandibular retrusion, or a combination of both the problems (Henry 1957; Moyers et al. 1980). The morphogenic pattern shows variations in population; therefore, many treatment approaches are available for alteration of the occlusal relationships of Class II malocclusions. These include extraoral traction appliances, arch expansion mechanisms, extraction procedures, functional jaw orthopedics, and orthognathic surgery (Bishara 2006; Pancherz 2000). True treatment of malocclusion requires the alteration of morphogenic pattern which was affected; thus, the treatment method has to be decided accordingly (Carels and van der Linden 1987; Harvold and Vargervik 1971).
For the treatment of maxillary excess, extraoral appliances like headgears are used for a long time (Firouz et al. 1992; Kloehn 1947; Poulton 1967). In cases where extraoral appliances are not recommended because of esthetic problems, treatment with extraction was another choice.
As reported by Mc Namara, 60 % of all Class II cases are characterized by mandibular retrognathism (McNamara 1981). Contemporary orthodontics aims to treat facial esthetics as the first priority (Shell and Woods 2003). Treatment of cases with mandibular deficiency is planned according to the age of the patient. Adult patients with completed growth are generally treated with orthognathic surgery. If growth potential is still present, functional treatment with fixed or removable functional appliances is the usual approach.
In today’s orthodontics, the success of functional appliances is out of discussion. In spite of their small differences in design, the philosophy of treatment in all functional appliances relies on keeping the mandible in a forward position. By this procedure, a new functional matrix is created, and the development of a new morphogenic pattern accordingly is expected (Carels and van der Linden 1987).
In Class II div II cases, treatment has to be performed by achieving dentoalveolar protrusion of the mandibular incisors. This can be achieved with fixed appliance treatment. However, in cases with deficient labial bone thickness, lower incisor protrusion may result in dehiscences. Therefore, some clinicians recommend labial bone grafting, together with corticotomies, buccal to the incisor roots (Dibart et al. 2010; Wilcko et al. 2001).
In adult Class II cases with dentoalveolar retrusion and prominent chin, mandibular advancement surgery may result in an esthetic problem on the chin area, which is usually solved with genioplasty surgeries. Treatment has to be planned according to the morphogenic pattern of the patient, as a principle. According to this statement, the treatment of mandibular dentoalveolar retrusion can be performed by carrying the mandibular anterior dentoalveolar segment forward (Triaca et al. 2001), resulting in overjet reduction as well as relative correction of the prominent chin.
Archwise distraction osteogenesis can be an effective and a practical method to reach the goals reported above. In this method, distractors can directly be applied to the archwire. To increase the rigidity of the system, 0.022″ brackets are recommended. Osteotomy spaces of 2 mm are created before the operation. Operation is carried out under local anesthesia or intravenous sedation. Following complete mobilization of the anterior segment, distractors are activated for 3–4 mm to see the movement. Then, the distractors are closed again, and the anterior segment is stabilized with 10–15° lingual inclination for latency period. The aim of this tipped position is to balance the possible labial tipping which is expected during the distraction. In this chapter, two cases treated with this approach are presented.

A 13-year-old female patient presented with crowding and deep-bite problems (Fig. 9.1a–e). She had a straight profile characterized with a prominent chin and nose and retrusive lips (Fig. 9.1f–h). Clinical and radiographic examination and analysis revealed that she had Class II div II malocclusion (Fig. 9.2). 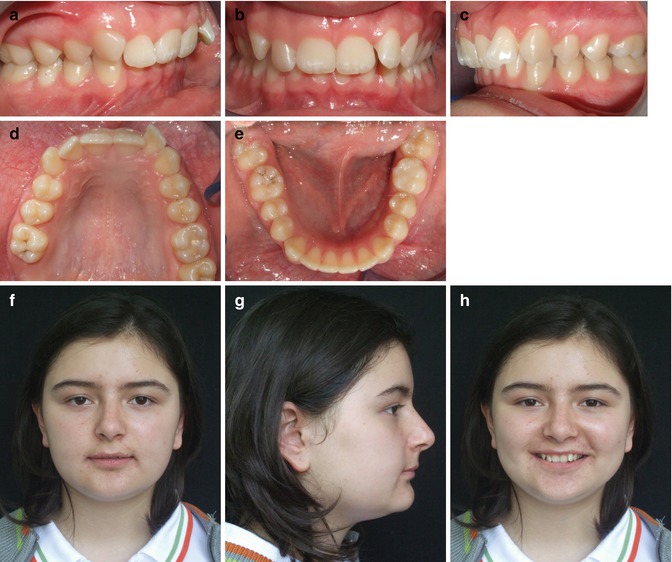 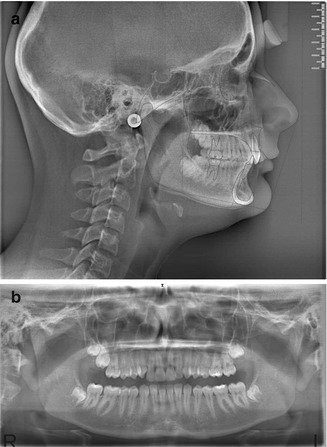 Fig. 9.2
(a) Cephalometric and (b) panoramic radiographs

The plan was first to level align the maxillary and mandibular teeth by a multi-bracket system and to create an overjet. Additionally, spaces were planned to be opened between lower canines and first premolars for future osteotomies. Since archwise distraction was planned to protract the lower anterior portion, 0.022″ slot braces were preferred which increase the rigidity of the system.

Following the leveling and aligning period, upper incisors were proclined in order to achieve enough overjet for lower anterior distraction. In the lower arch 0.021″ × 0.025″ stainless steel wire was placed with the distractors, and the distraction rate was 1 mm/day with two activations frequency (Fig. 9.3). 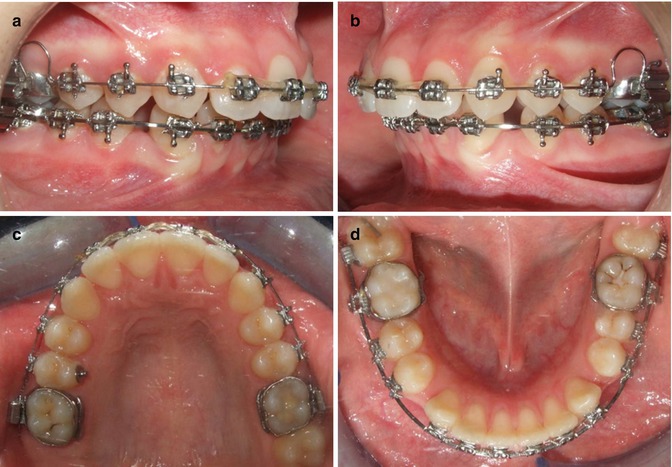 Fig. 9.3
Only gold members can continue reading. Log In or Register to continue