Anatomically, the periodontium is the collective term used for those structures that support the teeth in the jawbone, and traditionally includes the following tissues:

The gross anatomy of the periodontium in relation to a tooth is illustrated in Figure 9.1.

Figure 9.1 Gross anatomy of the periodontium. 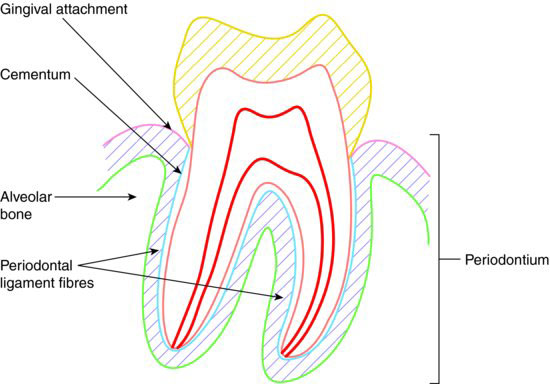 Once the crown of a tooth has developed, during odontogenesis, the formation of the root tissues begins. As root dentine is laid down, the root sheath disintegrates and the cells of the dental sac in immediate contact with the developing dentine differentiate into cementoblasts, and begin to lay down cementum.

The initial layer contains no cells, and as it matures it forms the dentinocemental junction. Later layers are formed more rapidly and enclose the cells that have formed the tissue in that area – these are then called cementocytes.

Mature cementum is around 65% inorganic, with the majority of its crystalstructure made up of calcium hydroxyapatite. The crystals lie within a matrix of fibroustissue, with the ends of collagen fibres from the periodontal ligament inserted into theouter layer of the cementum. These fibrous ends are called Sharpey’s fibres.

Any cementoblasts not enclosed in the matrix are positioned on the outer surface of the cementum, and they can continue laying down more tissue layers when required. As the tissue contains no blood vessels or nerve tissue, nutrients from the periodontal ligament are taken in by this outer ring of cementoblasts.

The microscopic relationship of cementum to the other periodontal tissues is illustrated in Figure 9.2.

Figure 9.2 Relationship of cementum to periodontium. 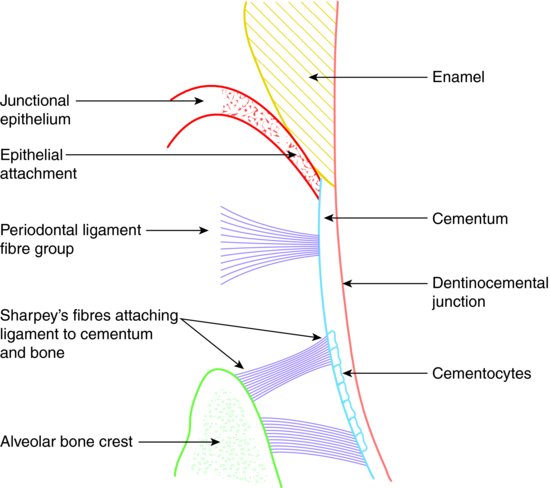 The periodontal ligament forms from the dental sac tissues, as the tooth root and cementum are developing. It is a fibrous connective tissue composed of various cell types suspended in its intercellular matrix. The main cells are fibroblasts, which form the collagen fibres of the periodontal ligament.

The fibres are not dispersed randomly throughout the matrix, but are arranged as directional bundles that run mainly between the cementum and the alveolar bone of the tooth sockets. Some run between adjacent teeth, while others run into the surrounding gingivae. Where any fibres are attached to cementum or bone, they do so by the specialised Sharpey’s fibres at their ends.

The main function of the ligament is to act as a shock absorber for the tooth, and allow it to ‘bounce’ in its socket during normal occlusal loading and usage. This prevents the tooth from being traumatised by normal actions such as chewing.

The various periodontal ligament fibre groups and their functions are summarised as follows:

The various fibre groups are illustrated in Figure 9.3. 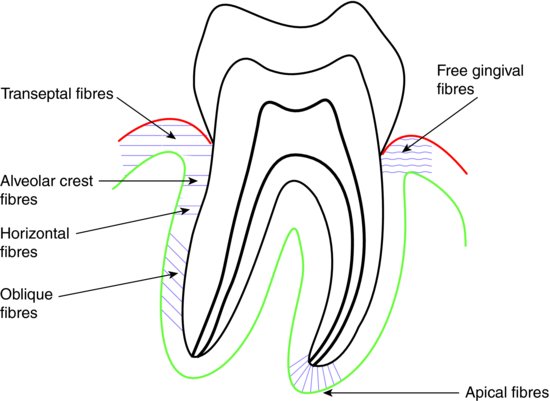 The transeptal fibres are those most important to the success of orthodontic treatment, as sufficient time must be allowed after treatment for the fibres to become stable in their new positions. Use of retainers to hold the re-aligned teeth while these fibres become stable is imperative if th/>