The cardiovascular system is composed of the following:

The whole system is sealed and enclosed, and runs in a similar fashion to a central heating system in a house.

The circulation of the blood throughout the body is represented diagrammatically in Figure 2.1. 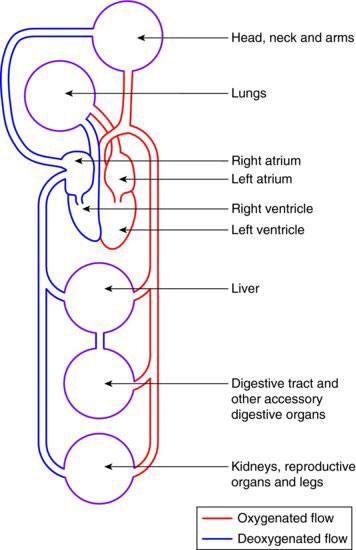 The heart is a muscular pumping organ situated in the chest cavity, or thorax.

In gross anatomy, it is composed of four chambers – two on the left and two on the right, with no natural communication between the two sides except in the foetus. The ventricles are separated by the interventricular septum.

The gross anatomy of the heart and the passage of blood within it are illustrated in Figure 2.2.

Figure 2.2 Gross anatomy of the heart. 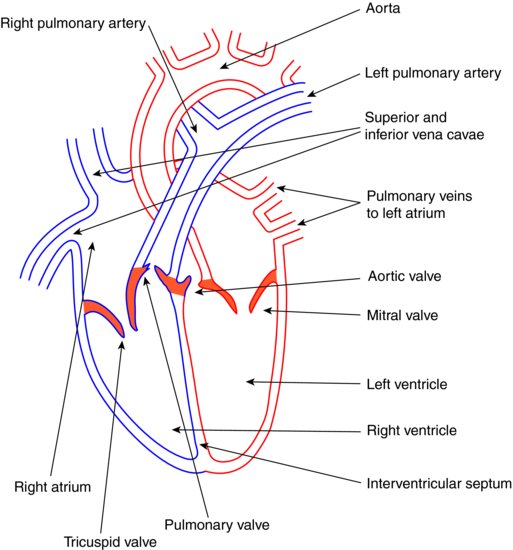 Following the blood flow from the body, through the heart to the lungs and back, and then out to the body again, the sequence is as follows:

The muscle tissue present in the heart (cardiac muscle) is unique and quite different from that involved in body movement (skeletal muscle) or that around hollow cavities within the body (smooth muscle).

Cardiac muscle has the ability to continue to contract and relax rhythmically, even when it is separated from its nerve supply and is, therefore, not being acted upon by electrical impulses from nerve tissue. In addition, it also does not become tired after a time and cease to contract, like other muscles do. No other muscle tissue has these abilities.

Collectively, the heart wall muscle is known as the myocardium, while the inner surface of the heart is lined by a thin layer of epithelial tissue called the endocardium.

The endocardium is an unbroken layer of tissue that runs into the inner surface lining of the blood vessels, called the vascular endothelium.

The heartbeat, or cardiac cycle, occurs about seventy times per minute in the average resting adult human.

It begins in a specialised group of muscle cells on the outer wall of the right atrium, called the sino-atrial node, or ‘pacemaker’.

These specialised cells receive electrical stimulation from two sets of nerves in the brain, one set speeds up the heart rate and the other set slows it down – so the rate of the heart beat is regulated to allow both exercise and rest, as necessary.

The full cycle occurs as follows:

The various valves within the heart are non-muscular structures; they open and close purely due to the fluid pressure differences produced during the contractions of the various heart chambers.

The rhythmic opening and closing of the valves are the heart beat sounds made audible by the use of a stethoscope during clinical examination.

The cardiac cycle is shown in Figure 2.3. 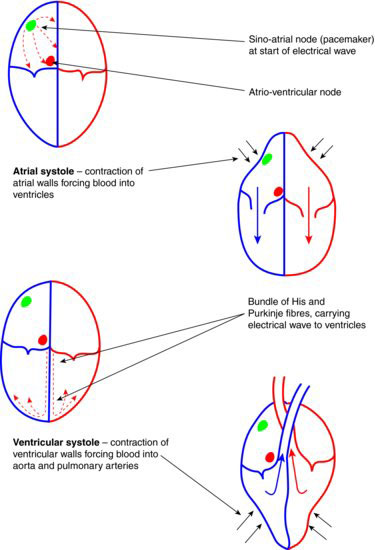 The three broad types of blood vessel – arteries, veins and capillaries – have each developed to best carry out their particular functions.

Arteries and arterioles (small arteries) specifically transport oxygenated blood from the heart to the body (except the pulmonary artery) and nutrients from the digestive system to the body tissues.

Oxygen is required by all of the body cells to produce energy to work, and nutrients are required for growth and repair.

Veins and venules (small veins) specifically transport deoxygenated blood from the body to the lungs via the heart (except the pulmonary vein) and collect waste products from body tissues to be excreted by the urinary system.

The gaseous waste product of respiration (breathing) is carbon dioxide, while many waste products are produced when nutrients are used by cells and tissues for growth and repair. All these waste products must be eliminated by the body to avoid the development of toxic and acidic conditions, which are damaging to healthy tissues.

Capillaries are the microscopic vessels where these various gaseous and nutrient exchanges occur, lying as networks of vessels that interconnect the arterial and venous sides of the circulatory system.

These vessels are made up of three layers of tissue, as follows:

Those arteries closest to the heart tend to have a thicker elastic layer than the smaller arterioles, so that they are better able to withstand the force of the blood surge as it first leaves the heart, without rupturing.

At the point between the end of ventricular systole and the beginning of the next atrial systole, the blood surge is continued along the length of the arteries to the body tissues by the sequential tightening action of the elastic layer.

The point between the two systoles, when the ventricles are relaxed, is called diastole.

It is measured as millimetres of mercury, with a sphygmomanometer and a stethoscope.

The arterial blood vessels become smaller and smaller, the further they are from the heart, being called arterioles when they are less than a certain diameter. As they arrive at the tissues they are supplying, they become smaller still and branch repeatedly, until they give rise to capillaries.

Capillaries have the following features:

It is in the capillary beds that the oxygen inspired in the lungs passes out of the circulatory system and into the body tissues to be used to create energy by the cells.

At the same time, carbon dioxide passes from the body tissues into the capillaries to be transported back to the lungs and exhaled. It is formed as the waste product of the cell activities during energy production.

This transfer of the two gases within the capillary beds is called internal respiration.

The lymph system acts as a safety mechanism, by draining all unwanted materials from the body tissues rather than allowing them to accumulate there, thereby reducing th/>