The digestive system is composed of the following:

The digestive system, or gastrointestinal tract (GI tract) as it is correctly termed, is effectively an open hollow tube running from the mouth to the anus, with various specialised sections along its way that are involved in food digestion.

The foods acted upon are carbohydrates, proteins and fats.

The pharynx lies at the back of the mouth and into the throat, while the oesophagus runs through the thoracic cavity and connects to all other parts of the GI tract, which lie in the abdominal cavity and beneath the diaphragm.

The GI tract and the accessory digestive organs are illustrated in Figure 4.1. 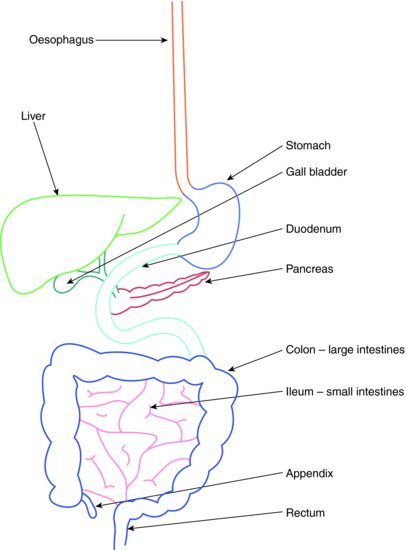 Food enters the GI tract in the mouth, where it is chewed (masticated) into smaller portions to form a bolus, and then mixed with saliva before being swallowed.

Voluntary tongue actions move the bolus towards the back of the mouth, the oropharynx, and then into the laryngopharynx of the throat. This region forms the topmost opening of both the oesophagus and the trachea, with the trachea lying in front of the oesophagus in the neck.

A flap of cartilage called the epiglottis projects from the front wall of the larynx, and is instrumental in preventing food and fluids from entering the topmost opening of the trachea, the glottis, during swallowing.

The oropharynx also communicates with the nasal passages at an area behind the soft palate called the nasopharynx.

The anatomy of the pharynx and larynx is illustrated in Figure 4.2.

The act of swallowing a bolus of masticated food or a fluid is both a voluntary and involuntary action. The medical term for swallowing is deglutition.

Initially, the food bolus is directed voluntarily towards the oropharynx by the muscular actions of the tongue. This is known as the oral phase of swallowing.

The tongue shapes the bolus into a circular or ‘sausage-shaped’ mass, using its flexible tip and rolled sides to press the bolus into shape against the roof of the mouth – the hard palate, before guiding it posteriorly.

At this point, the involuntary pharyngeal phase begins.

The soft palate rises to seal off the nasal passages, while a coordinated muscular contractile wave propels the bolus through the relaxed oesophageal opening (the oesophageal sphincter) and into the oesophagus itself.

The muscular wave is called peristalsis and occurs throughout the length of the GI tract, moving the food bolus in one direction only.

At the same time, the larynx is raised to close the glottis and the epiglottis falls across it so that respiration is temporarily stopped. This prevents the food bolus from falling into the trachea and being inhaled into the lungs.

Once the bolus enters the oesophagus, the final involuntary oesophageal phase of swallowing occurs. Peristalsis continues to move the bolus along the length of the oesophagus and into the stomach, taking just up to 10 seconds to do so. Fluids pass much more quickly.

The junction of the oesophagus and the stomach – the cardiac sphincter – relaxes as the peristaltic wave approaches, and the bolus is allowed to enter the stomach itself.

Once the bolus has entered the stomach, the sphincter contracts and tightens again so that food contents cannot reflux back into the oesophagus under normal circumstances.

The swallowing sequence is illustrated in Figure 4.3. 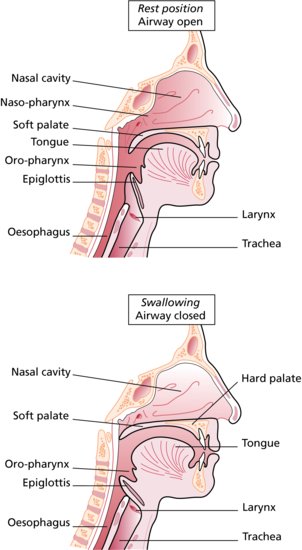 The stomach lies in the upper left quadrant of the abdominal cavity, just below the diaphragm. It connects at the top end to the oesophagus at the cardiac sphincter, and at its lower end to the small intestines at the pyloric sphincter.

Other than the initialisation of carbohydrate digestion that occurs in the mouth, the stomach is the organ where the breakdown and digestion of food truly begins.

Consequently, it has an extensive blood supply from the gastric arteries, which branch repeatedly to form a vascular network around the organ. All the blood supplied to the stomach leaves the organ via the gastric veins, which drain into the portal vein supplying the liver. This arrangement ensures that all ingested products pass through the liver for further chemical processing, before the blood joins the main circulation again.

The stomach has several functions, as follows:

In general with the microscopic anatomy of most areas of the GI tract, the stomach is composed of the following basic structures:

Specialised cells of the gastric mucosa

With these mucous cells, the other cells making up the gastric mucosa occur in specialised regions called gastric glands, and consist of the following:

A gastric gland is illustrated in Figure 4.4. 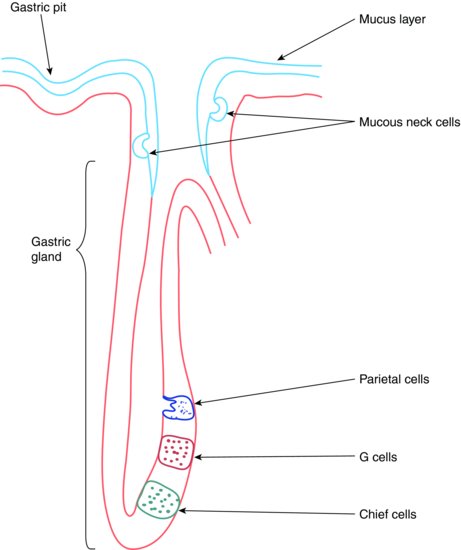 The various functions of these cells and their gastric secretions are summarised in the following text.

The cells of the gastric glands only produce their various secretions when stimulated. The main initial stimulation occurs in response to the anticipation of having a meal – the sight, smell and taste of food, as well as its presence within the mouth before swallowing.

Appetite-regulating areas of the brain are activated and send signals to the stomach via the vagus nerve (cranial nerve X) once the food is swallowed and enters the organ.

This has the following effects:

As peristalsis moves the partially digested food from the stomach to the small intestines, G cells here are stimulated to release more gastrin for a short time, so that digestion continues.

Very little absorption of food occurs in the stomach, except for alcohol, and no water at all is absorbed.

This is a protective mechanism that acts to quickly and forcefully expel noxious and toxic substances from the GI tract, before damage is caused. It is controlled in a specialised area of the brain, called the medulla, and may occur due to other stimuli, such as the following, rather than as a protective mechanism:

The small intestines are connected to the end of the stomach at the pyloric sphincter, and have three distinct sections to them:

They connect to the large intestines at the end of the ileum.

The final stages of digestion and the absorption of some nutrients occur in the small intestines.

The chyme produced in the stomach passes into the duodenum and is mixed with pancreatic juice and bile, which has been stored in the gall bladder after being made by the liver.

As with the stomach, the small intestines are very well adapted to carry out their digestive and absorptive functions, not only by cellular specialisations but by their huge surface area too.

The internal surface area is massively increased by the presence of finger-like projections called villi throughout the length of the small intestines. The mucosal covering of the epithelial cells forming the villi are also covered in tiny projections called microvilli, which increases the surface area available for absorption even further.

The intestinal surface itself is arranged into circular folds, which causes the chyme to flow through in a slowed spiral motion, thereby increasing the time available for nutritional absorption to occur.

Beneath the surface of each villus are a dense capillary network and a lymph vessel, so that absorbed nutrients are transported easily to the liver in the portal vein, and absorbed water is removed quickly from the area via the lymphatic system.

The microscopic anatomy of the small intestine is illustrated in Figure 4.5.

Figure 4.5 Layers of intestinal wall and a villus.