It is very important for all dental care professionals (DCPs) to have a good underpinning knowledge of the normal structure and function of the human body, and especially of their specialised area – the oral cavity and its surroundings.

This knowledge is essential when trying to understand the subjects of human health, the processes involved in the onset of human disease and the methods available to prevent disease or to treat it when already present.

The scientific discipline that deals with the life processes of living organisms is called biology, and the specific area for this text is human biology.

The particular study of the structures of the human body and their relationships to one another is called human anatomy, and the study of how the body actually functions is called human physiology.

The subject of anatomy covers not only the gross structure of the human body – muscles, bones, organs, and so on – but also the equally important microscopic structures of the cells and tissues themselves that make up these gross structures.

The study of the microscopic structure and function of cells, and the tissues that they form, is called histology.

The structures and functions of the human body as a living organism work in a similar way to those of a complicated machine that follows the laws of both chemistry and physics for its operation.

At the most basic level, all the structures of the body are made up of atoms arranged in specific ways that identify them as chemical elements, such as oxygen, hydrogen and carbon. When these different elements combine together they form molecules, such as water and carbon dioxide.

When the molecules themselves combine together in many different ways, they form the basic unit of any living organism – the cell.

The microscopic structure of a basic cell is shown in Figure 1.1 and is composed of the following:

Figure 1.1 Basic structure of the cell. 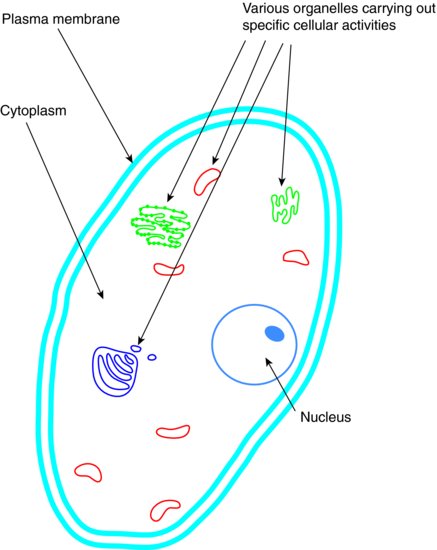 It is within the nucleus that the genetic code is stored (usually referred to just as ‘DNA’ by the lay public), so the nucleus controls all of the cell functions and directs its activities.

Most cells are specialised in their actions and perform certain functions within the body. When they are grouped together to carry out these particular functions, they are called tissues.

The main types of tissue found in the body are:

When several different groups of tissues exist together and carry out a particular function (or functions) they form an organ, such as the heart, the liver, the spleen, and so on.

Organs that have related functions then form integral parts of body systems, such as the digestive system, the respiratory system, and so on.

These will be summarised later.

The four main basic tissue types will be covered in greater depth to help give a greater understanding of their structure and functions within the oral cavity.

Although separated out in the previous list, blood and lymph will be grouped together with the other connective tissues.

This tissue develops from the mesoderm layer of the early embryo, once the developing inner cell cluster has organised into a flat disc at around 3 weeks after fertilisation (see Chapter 6).

Muscle tissue can be classified into three groups, depending on their structure, their function and which part of the nervous system activates them:

Skeletal muscle has the following characteristics:

Smooth muscle has the following characteristics:

Cardiac muscle has the following characteristics:

The microscopic appearance of the three muscle types are illustrated in Figure 1.2. 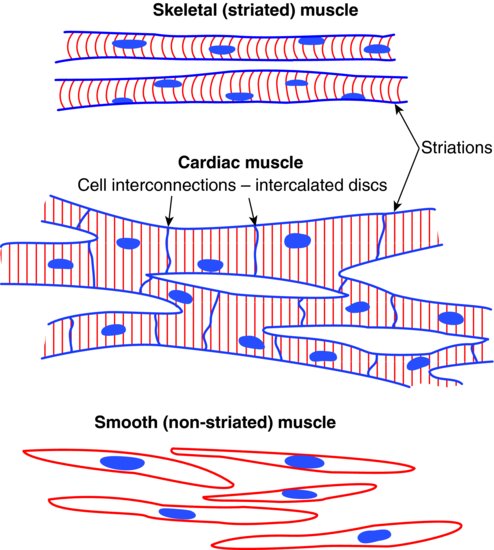 This tissue develops from the outer layer of cells of the early embryo, the ectoderm and its specialised sub-layer the neuroectoderm.

The specialised sensory cells of the eyes, the nose, the ears and the taste buds of the tongue are all part of the nervous system, but the basic nerve cell is the neurone.

The neurones of each set of nerve type are arranged in long chains throughout the length of each nerve, interconnecting one with the next neurone in the chain.

Within the brain itself are specialised neurones and their support cells, which are discussed in more detail in Chapter 5.

Nervous tissue making up the peripheral nervous system (that outside the brain and spinal cord) can be simply classified into two groups, depending on the direction of travel of the electrical impulses that they transmit:

A typical neurone is made up of three sections, the cell body and two types of cytoplasmic projection, and is illustrated in Figure 1.3. 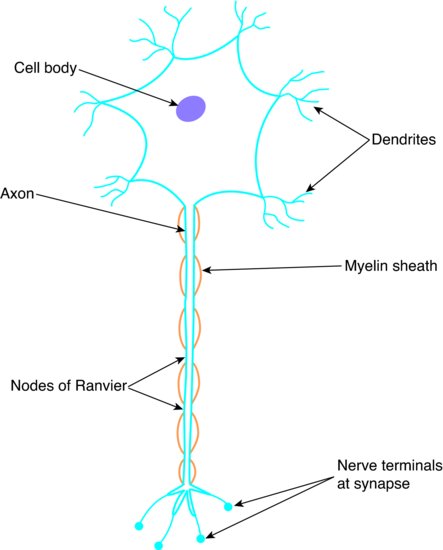 The cell body itself is the support structure for the neurone, and contains all of the usual cellular contents: a nucleus, various organelles, and so on.

The axon is a much longer projection than the dendrites and is surrounded by its own cell membrane, which is responsible for the continued impulse transmission along the neurone, away from the cell body.

The method of electrical impulse transmission is explained in Chapter 5.

In many nerves throughout the body, the axon also has a fatty covering along its length, interrupted periodically by tiny points of non-coverage called nodes of Ranvier.

In these nerves, the electrical impulse is able to leap-frog along the axon by jumping from node to node, and in this way the impulse is transmitted far more quickly than would otherwise be possible.

The point at which one neurone connects with another, or with the tissue that it is to innervate, is called the synapse. At this point, the electrical impulse is further transmitted by chemicals called neurotransmitters.

This tissue develops from all three layers of cells in the early embryo – the ectoderm, the mesoderm and the endoderm – and the layer of origin determines the final tissue and its function in the body.

So, a simple overview is as follows: