Tooth embryology and eruption are discussed in Chapter 7.

Although the permanent dentition is made up of four morphologically different types of teeth, the gross anatomy of each is the same. Their shape, or morphology, differs depending on their function and this will be discussed later.

The four types, from the midline to posterior, are:

The primary dentition (also referred to as the deciduous dentition) is made up of just three different types of teeth – there are no premolars present. The differences between the two dentitions is summarised later.

The crown is the section of the tooth visible in the oral cavity, following its eruption from the underlying alveolar bone. The neck is the section where the tooth and the gingival tissues are in contact with each other, and the root is the (usually) non-visible section that holds the tooth in its bony socket.

All teeth are composed of the same four tissues:

The gross anatomy of the tooth is shown in Figure 8.1.

Figure 8.1 Gross anatomy of a tooth. 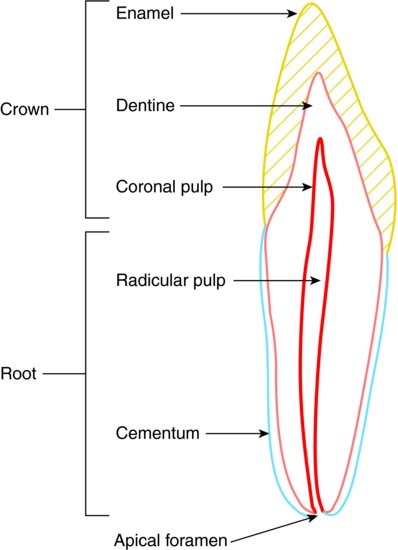 THE TOOTH – MICROSCOPIC ANATOMY AND HISTOLOGY

The outer surface of the crown of the tooth, enamel, is derived embryologically from the ectoderm layer of the early foetus, as the enamel organ.

The inner bulk of the tooth, dentine, is derived embryologically from the specialised neuroectoderm layer, and these two layers are separated by the basement membrane.

Differentiation of the embryological tissues of the tooth begins at around 6 weeks after conception.

Full details of the embryological development of the teeth are given in Chapter 7.

Once the developing tooth has reached the bell stage, the final two stages that occur result in the formation of the tooth as it appears on eruption into the oral cavity. These two stages are:

The matrix formed during apposition is secreted out of the cells into the surrounding area, and is partly calcified so that it can act as the crystalline frame on which future mineralisation can occur, during maturation.

This cell activity causes the gradual disintegration of the basement membrane, and ultimately stimulates the ameloblasts on its other side to begin the process of amelogenesis – the laying down of enamel matrix.

As the basement membrane disintegrates, the early dentine and enamel layers come into contact with each other, and once this junction is mineralised during the apposition process, it forms the amelodentinal junction.

The apposition process is illustrated in Figure 8.2. 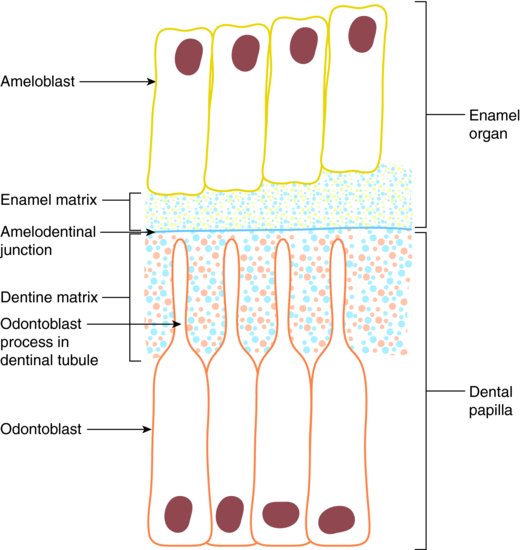 As the odontoblasts continue the dentine layering process and move away from the amelodentinal junction, they remain attached to the junctional tissue by developing cellular extensions, which will eventually lie within mineralised tubes of dentine – the dentinal tubules. The layer of odontoblast cells themselves will ultimately lie along the outer rim of the pulp.

The ameloblasts will continue the process of enamel mineralisation until the tooth erupts, but are then lost.

During the maturation stage of tooth development, ameloblasts actively remove the organic material components of the enamel matrix and replace it with vast amounts of the mineral calcium hydroxyapatite. This maturation process occurs from the first formed areas of the tooth – the cusps, incisal edges and occlusal surfaces, and continues towards the outer enamel surface.

Subsequent waves of mineralisation then occur over the surface of these first areas and progress towards the neck of the tooth. Consequently, the cusps, incisal edges and occlusal surfaces are the most mineralised regions of the mature tooth.

Mature enamel forms the hardest tissue in the body, and is composed of crystals of calcium hydroxyapatite laid out in prisms (rods), which run from the amelodentinal junction to the tooth surface over the crown of the tooth. The tissue is 96% inorganic, and has neither vascular nor nerve tissue within it, so once lost, it cannot renew or replace itself.

It forms a translucent covering over the underlying dentine of the tooth, so it is dentine that produces the colour shade of the teeth.

Once erupted into the oral cavity, the enamel can become further mineralised by the uptake of fluoride ions into the hydroxyapatite structure – this is the basis for the prevention of dental caries, by making the enamel surface more resistant to attack by the weak organic acids produced by cariogenic micro-organisms.

The process of caries development and progression through the tooth is well detailed in various dental textbooks, and is summarised here later.

In addition to enamel loss due to caries, the tissue can also be lost in the following ways:

The maturation of dentine follows a similar process to that of enamel, but as stated previously, the odontoblast cells remain within the outer pulp tissue for life. Dentine is therefore able to continue forming within the tooth, and often does so as secondary dentine.

Mature dentine is also composed of calcium hydroxyapatite crystals, but is only 70% mineralised. The mineralised tissue develops hollow tubes where the odontoblast extensions lay during early dentinogenesis, and these are present throughout the tissue as hollow dentinal tubules.

The tubules contain tissue fluid and nerve fibrils from the pulp tissue, so that the dentine can detect pain sensation. There are no blood vessels within the dentine, instead the odontoblasts receive nutrients from the tissue fluid.

The mature tooth tissues are illustrated in Figure 8.3. 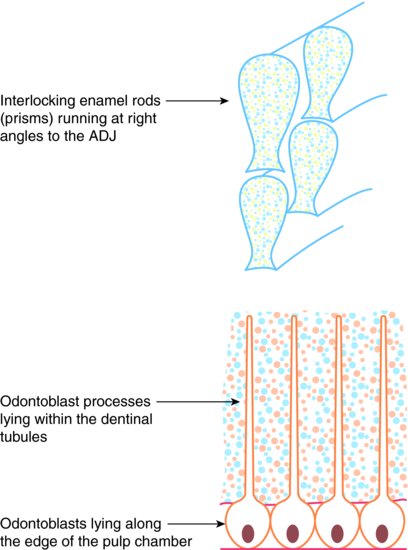 The development of the root follows a similar pattern to that of crown formation.

Root development begins once the crown of the tooth is formed, starting at the cervical loop. The formation of Hertwig’s root sheath stimulates the inner layer of cells to differentiate into odontoblasts, which then begin laying down early dentine, in a similar manner to the process of dentinogenesis that occurred in the crown.

As the process continues, the root sheath disintegrates and the overlying cells forming the dental sac differentiate into cementoblasts and begin laying down a layer of cementum over the developing root.

The contact layer between the early root dentine and the c/>