The nervous system is composed of the following:

The tongue and taste sensation are covered in detail in Chapter 7.

Details of the other sensory organs are beyond the remit of this text.

The brain is the organ responsible for the continuation of life for all organisms, by acting as the control centre of the body. All basic life functions, such as maintenance of the heart rate, respiration and the control of body temperature (homeostasis), are controlled by the brain.

Damage to the brain, when severe enough and when affecting the areas responsible for these basic functions, will result in death.

Explained in simple terms, the peripheral nervous system is composed of various types of nerves, each with their own specific functions. The cells of the brain receive information from the body and its surroundings via one type of nerve, and they analyse and interpret this information in various areas of the brain itself.

Once interpreted, the brain sends messages to the relevant parts of the body to act on the information accordingly, via various other types of nerves.

Sensory nerves – carry information from the body to the brain, to be interpreted and acted upon. The information they carry includes the following sensations:

Motor nerves – carry information from the brain to the body, to allow the body to respond to the information received accordingly.

The motor nerves can be sub-divided further, depending on their function:

Throughout the body, the peripheral nerves travel together, and with blood vessels, in what are known as neurovascular bundles.

The brain and spinal cord are encased respectively within the skull and the vertebral column of the spine. They are both covered by three membranous layers called the meninges, the inner two layers being separated by the cerebrospinal fluid (CSF).

This clear fluid is secreted by specialised areas within the brain itself, and it acts in a shock-absorber capacity to protect the brain and spinal cord.

During normal head movements, they both float gently in the CSF and are therefore prevented from ‘bouncing around’ and becoming damaged within the confines of the skull and vertebral column.

The CSF is formed in a structure called the choroid plexus, and it flows from within the deeper structure of the brain out to the meningeal spaces. Once here, it gradually passes back into the venous blood supply so that fresh CSF is always being stimulated to be produced.

The brain consists mainly of two cerebral hemispheres, which take up the vast majority of the skull, and these are formed from four lobes in each hemisphere, named as follows, and in line with the bony plates of the skull itself:

The cerebral hemispheres appear as vastly convoluted folds of nerve tissue, the layout of which provides a huge surface area of specialised nerve cells appearing as the characteristic ‘grey matter’ of the brain itself.

The two cerebral hemispheres are joined centrally by the corpus callosum, where nerve fibres from one side of the brain can cross to the other side. Immediately beneath this juncture are the important structures of the mid-brain region:

Beneath the mid-brain region lies the brainstem, composed of the pons and the medulla oblongata, which merges with the spinal cord.

Behind the mid-brain region, and under the occipital lobes of the cerebrum is the cerebellum, or hind-brain. This structure is particularly concerned with balance, posture and the coordination of movement.

The areas of the brain are shown diagrammatically in Figure 5.1.

Figure 5.1 Areas of the brain. 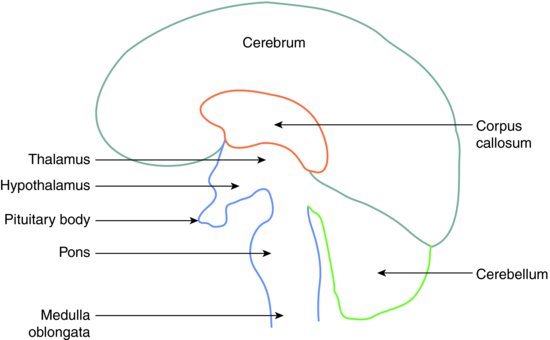 The spinal cord begins as the medulla leaves the skull through the foramen magnum, and as the nerve tissue enters the vertebral column. As the cord lies within the bony spine, it gives rise to sequential pairs of nerves along its full length; sensory nerves entering the column and motor nerves leaving it.

These form the systemic nerves, which receive sensations from the whole body except the head and neck region, and transmit motor impulses to the same body areas.

The nerves supplying the head and neck region leave the brain directly from its under surface, as 12 pairs of cranial nerves.

The 12 pairs of cranial nerves are numbered as Roman numerals, but each has its own name too.

Some of the cranial nerves are of particular importance to the dental team because they supply the oral cavity and its surrounding structures. These are covered in detail in several following chapters, and a resume of all 12 is shown in Table 5.1.