The respiratory system is composed of the following:

Unlike the cardiovascular system, which is sealed and enclosed, the respiratory system is open to the atmosphere to allow the intake of air during breathing.

During inspiration (breathing in), atmospheric air containing about 21% oxygen is drawn into and through the system via the nose or mouth, and down into the microscopic structure of the lungs to the alveoli.

This gaseous exchange mechanism is the main function of the respiratory system.

The principal respiratory organs – the lungs – are situated in the thorax or chest cavity, one to the right of the sternum (the breast bone) and one to the left, with the heart lying over the latter’s lower part.

The right lung has three lobes to its structure while the left lung has only two, due to the presence of the overlying heart.

The arrangement of the lungs and heart within the thorax is shown diagrammatically in Figure 3.1.

Figure 3.1 Position of the heart and lungs in the thorax. 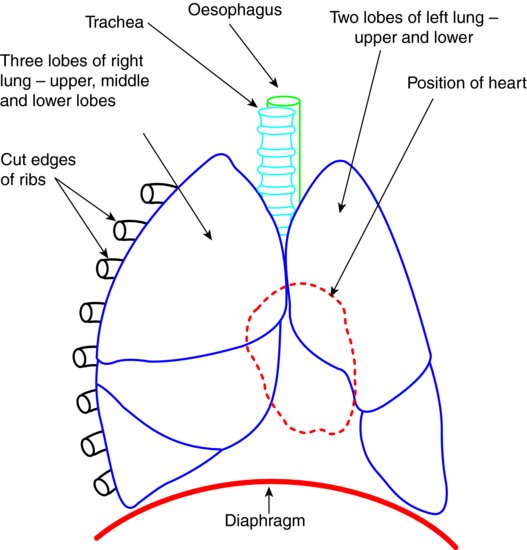 The thorax itself is an enclosed cavity composed of the thoracic spine behind, the rib cage and the sternum to the front.

The vertebrae of the spine articulate with the back of the rib cage, this cage then runs forwards and round to attach to the sternum. This creates the ‘bell shape’ of the chest cavity.

The base of this bell-shaped cavity is formed by a muscular sheet called the diaphragm, while the ribs are separated from each other by the intercostal muscles.

The movement of these respiratory muscles to increase the size of the chest cavity is instrumental in the respiratory process. The lungs themselves cannot increase their own size by inflation.

The inner surface of the thorax and the outer surface of the lungs are lined by the pleural membranes, which are separated by a thin layer of fluid that acts to lubricate the membranes during breathing movements.

The musculoskeletal anatomy of the thorax is illustrated in Figure 3.2. 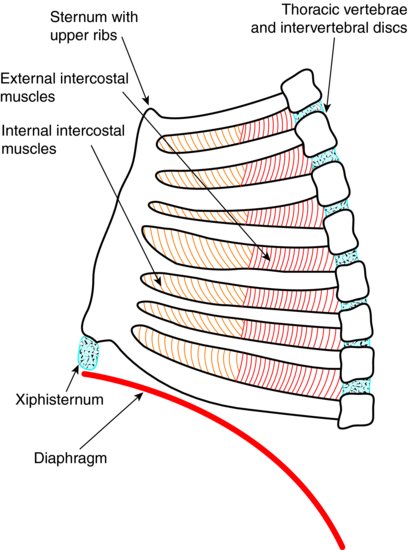 Air first enters the respiratory system through the nose, although in some situations it is also drawn in through the mouth. Mouth breathing tends to occur during exercise, when the body’s demand for oxygen is increased, or in some people who tend to habitually breathe through their mouths.

Air passing through the nose tends to be warmed as it flows over the capillary network lining the nasal passages, and this makes it less irritant to the deeper structures of the system – inhaling cold air often stimulates coughing.

Inhaled air then passes to the back of the nose or mouth – the pharynx, and then to the larynx in the throat. The larynx forms the top end of the structure commonly called the windpipe, the trachea, and contains specialised flaps of tissue that form the vocal cords. The controlled movement of air over these cords form the speech sounds in humans.

In addition, the larynx contains a flap-like structure called the epiglottis, which falls across the top of the trachea during swallowing and so prevents food particles and fluids from entering the lungs.

Up to this point, the anatomical structures of the respiratory system lie within the skull and the neck, but as the trachea approaches its lower end it enters the thoracic cavity.

The upper respiratory tract is shown in Figure 3.3. 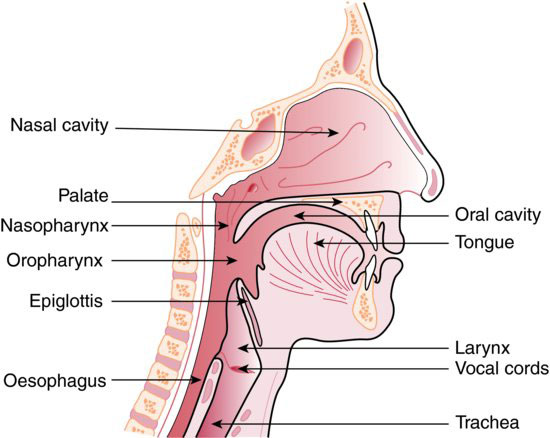 The trachea and its two end branches, the right and left bronchi, are lined with rings of cartilage so that they form non-collapsible tubes. This ensures they remain open during breathing movements and allow the flow of inspired and expired air into and out of the lungs.

Each main bronchial tube then splits into two, and two again and again, to form the smaller conducting airways of the bronchioles, lying within the structure of the lungs themselves. Their function is simply to transport the inspired air to the deeper tissues of the lungs, warming and moistening it as it passes through.

The final branches of these conducting tubes, the respiratory bronchioles, are the points at which gaseous exchange first occurs. The airways continue to reduce in size until they run into the main structures concerned with respiration, the alveolar sacs containing the alveoli.

These microscopic structures provide a massive total surface area for gas exchange to occur, allowing the uptake of huge amounts of oxygen for body functions to continue.

As stated previously, the nasal passages are the main entry port for inspired air, and they have a vast capillary network throughout their structure that helps to warm the air. In addition, the nostrils contain hairs that help to trap particulate debris such as dust specks, thereby preventing the entry of these larger foreign particles into the body.

Microscopically, the trachea and bronchi are lined by specialised epithelial cells that have hair-like projections called cilia over their surface. The cilia continually move in a wave-like motion and waft any smaller inhaled particles away from the lungs and towards the mouth, where they can be swallowed or spat out.

The inhaled particles will have become trapped first in a mucus layer secreted by goblet cells within the epithelium.

The walls of the trachea and bronchi contain rings and plates of cartilage so that they remain open during inspiration. Their diameters are therefore fixed and so contain little muscle in their structure.

The bronchioles up to the alveolar sacs are surrounded by bundles of smooth muscle fibres, which allow these airways to alter their diameter as required – widening during exercise to increase the volume of air inspired, or narrowing to reduce the intake of noxious gases such as smoke.

This adjustment in size is called bronchodilation and bronchoconstriction, respectively.

In contrast to the upper airways, the bronchioles contain no cartilage and can therefore collapse when the air pressure within them is less than atmospheric pressure. This pressure difference can occur in situations such as during a prolonged or forced expiration.

The alveoli lie within the alveolar sacs at the very end of the respiratory system. They are composed of a thin layer of epithelial cells, often just one cell thick, and are surrounded by a huge network of pulmonary capillaries.

Some of the alveolar epithelial cells secrete fluid that li/>