The skull is the topmost part of the bony skeleton of the body, the head, and is made up of two main areas:

All of the bones of the skull except the lower jaw, the mandible, are fixed to each other by immovable joints called sutures.

The base of the cranium articulates with the topmost bone of the vertebral column, the atlas, allowing nodding movements of the head.

At birth and during infancy, the bony plates making up the cranium are separated from each other by two natural membrane covered spaces called fontanelles, which allow growth of the brain without bony restriction.

By the age of 18 months the fontanelles should have closed, following the natural growth together of the bony plates making up the cranium.

ANATOMY OF THE CRANIUM

The cranium is composed of eight bones, which are separated by the cranial sutures – these are visible on a dry skull as the zig-zagged joints between the bony plates.

The bones themselves are as follows:

The skull and cranial bones are illustrated in Figure 7.1. 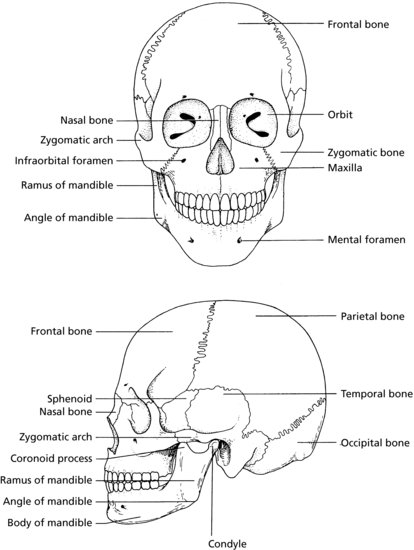 The main function of the cranium is to encase and protect the brain.

All of the sensory nerve cells running from the body to the brain, and all of the motor nerves running from the brain to the body have to pass in and out of this bony cavity, and they do so through many natural openings in the underside of the cranium, called foramina (singular – foramen).

Similarly, all of the blood vessels supplying the head and neck structures pass through these same foramina or between natural spaces between adjacent bones, called fissures.

The largest foramen of all is the foramen magnum, which opens through the occipital bone, and allows the exit of the spinal cord from the base of the brain and into the vertebral column of the spine.

Other foramina of the cranium with particular relevance to dentistry are shown in Table 7.1.

Some of the bony openings are listed and their positions on the underside of the cranium are shown in Figure 7.2. 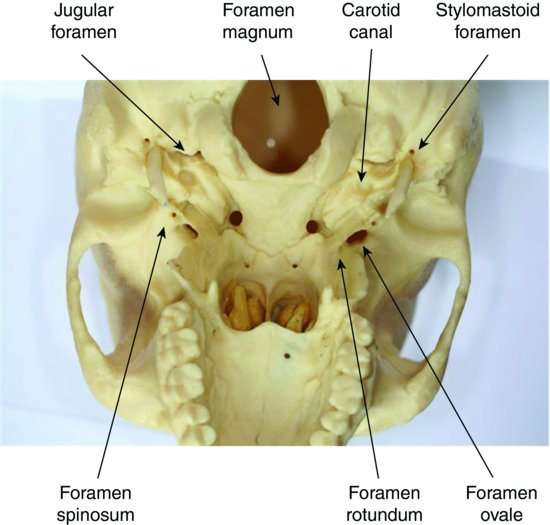 In addition to these bony openings, some cranial bones also have various projections and plates present on their outer surfaces, which serve as attachments for ligaments and muscles associated with head and jaw movements, or which form part of facial structures.

Those with particular relevance to dentistry are shown in Table 7.2.

Some of the bony processes listed and their positions on the skull are shown in Figure 7.3. 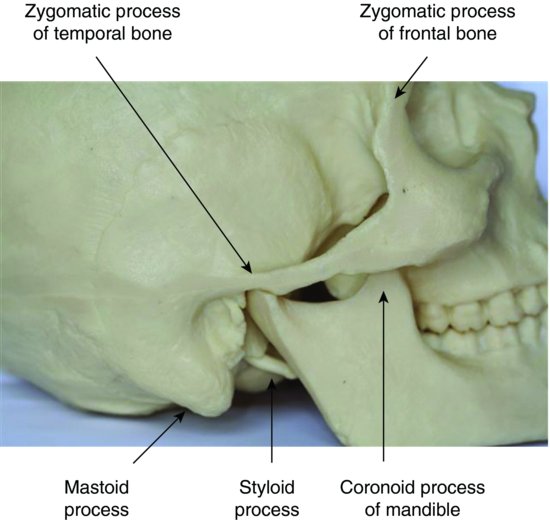 Although the cranium is mainly a hollowed out cavity enclosing the brain, the head itself would be too heavy to lift by the neck muscles if the bones were solid.

Consequently, several of them contain air-filled sinuses that reduce the overall weight of the head, allowing it to be held upright and looking forwards.

The main cranial sinuses are as follows:

ANATOMY OF THE FACE

The face is composed of 14 bones that are all separated from each other by sutures, as in the cranium. The only exception is the mandible, forming the lower jaw, which articulates with the temporal bone at the hinged temporomandibular joint (TMJ).

The bones themselves are as follows:

The skull and facial bones are shown in Figure 7.4. 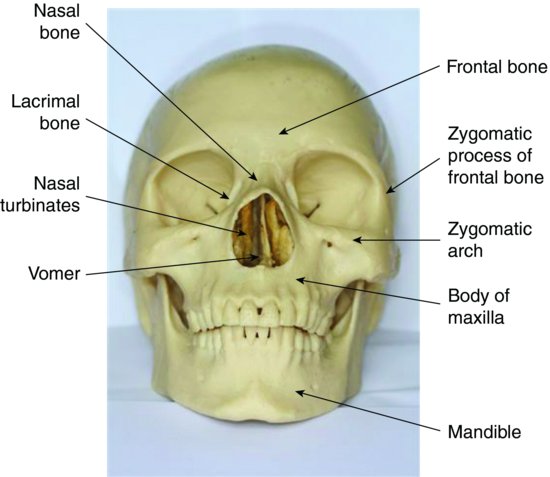 The maxilla and palatine bones

The maxilla effectively forms the middle-third of the face, and as with various cranial bones, it has several foramina and bony projections that are dentally relevant.

The two maxilla bones join together in the centreline of the face, at the intermaxillary suture, and the inferior portion of these two sections form the horseshoe-shaped alveolar process.

It is within this process that the upper teeth form in the embryo, and later erupt as the primary then secondary dentition.

Within each half of the main body of the maxilla are the large air-filled sinuses called the maxillary antra (singular antrum), and the roots of the upper posterior teeth tend to be in close or intimate contact with them.

Inflammation of these air spaces (sinusitis) due to a respiratory infection often mimics dental pain in these teeth, or conversely a dental infection can be mistaken for sinusitis.

The main anatomical landmark of the maxilla from an anterior view is the infraorbital foramen.

This natural bony opening allows the passage of the two nerves supplying sensation to the anterior upper teeth, and their surrounding soft tissues.

Some areas and protuberances of the maxilla are also the origins of various muscles of facial expression.

The main landmarks of the maxilla from an inferior view are those of the maxillary hard palate and the alveolar process. It is here that the palatine bones are also of relevance.

The alveolar process exists purely to hold the upper teeth in situ – when the teeth are lost, the bone gradually resorbs away and the height of the process (and therefore the face) is lost permanently, unless restored by the provision of dental treatment (dentures, implants, etc.)

The palatine process of the maxilla forms the front section of the hard palate, and is fused in the midline at the median palatine suture. The teeth are arranged from the midline backwards on each side of the alveolar process, running from the two central incisors to the third molars.

Just palatal to the central incisors is the incisive foramen, where the nasopalatine nerve emerges and supplies sensation to the palatal soft tissue covering of this area.

Posterior to the third molars is a bony protuberance called the maxillary tuberosity, which is the very end portion of the alveolar process. It is pierced by several foramina, which allow the entry of the sensory nerve supplying the majority of the molar teeth and their buccal soft tissues.

Occasionally, a nodular enlargement of the hard palate is present, and is a benign overgrowth of bony tissue called a palatal torus.

The most posterior section of the hard palate is formed by the palatine bones, and with the palatine process of the maxilla they form not only the roof of the mouth, but also the floor of the nose.

The various anatomical landmarks of the maxilla and palatine bones are illustrated in Figures 7.5 and 7.6. 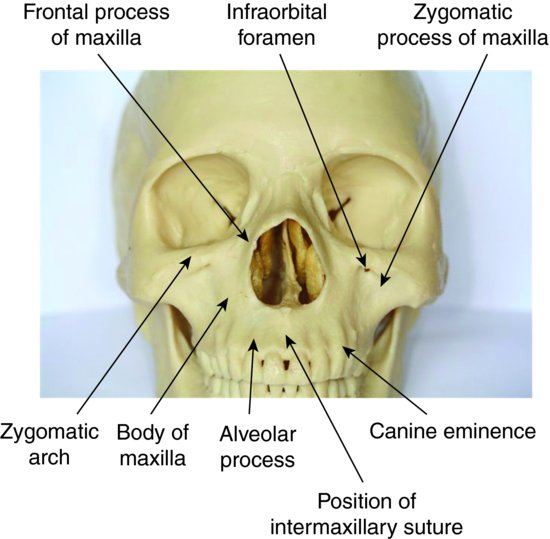 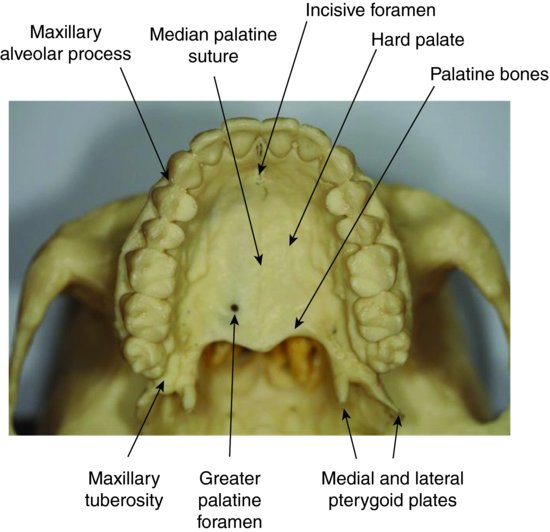 Fractures of the maxilla

From time to time, the DCP may come into contact with patients who have experienced trauma to the head and neck region. This is particularly true of those working in a maxillofacial hospital department, where the management of facial trauma is one of this unit’s many specialities.

Fractures of the middle-third of the face are a relatively frequent occurrence following horizontal trauma to the region, and often occur following events such as a car crash, a serious fall or a fight.

Conveniently, they have been classified into five categories ranging from the least to the most serious, as follows:

The Le Fort III is the most serious fracture, as the damage through the ethmoid bone effectively opens the cranium and exposes the brain to the atmosphere. The level of damage and bone displacement experienced in any maxillary fracture will depend on the force of the trauma that caused it.

The maxillary fractures are illustrated in Figure 7.7. 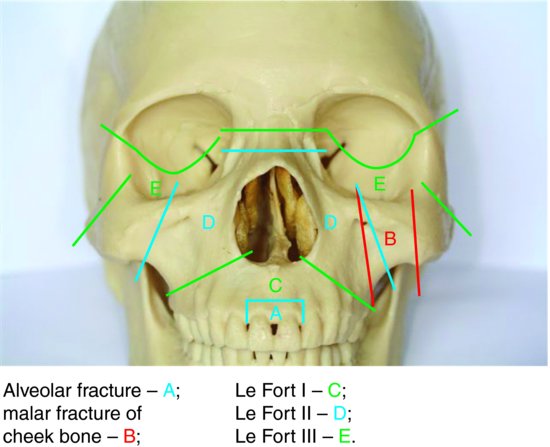 The mandible is the single, horseshoe-shaped bone that forms the lower jaw, and is the only moveable bone of the skull.

Its front horizontal portion extends into the alveolar process, which holds the lower teeth in situ, while its two posterior vertical struts allow articulation with the temporal bone at the TMJ and allows the insertion at various points for the muscles of mastication.

Looking at the mandible from an anterior view, the following anatomical landmarks are visible: 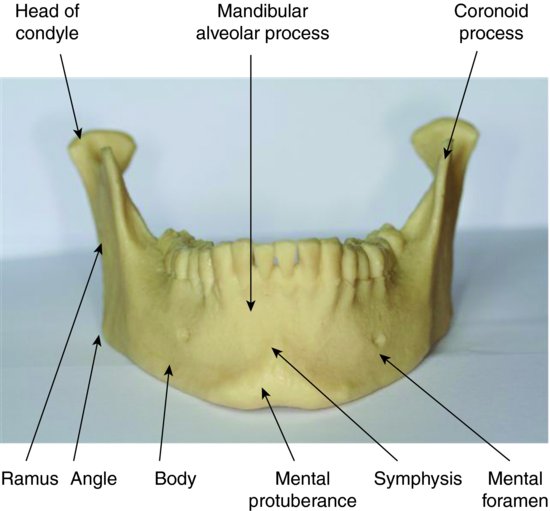 Looking at the mandible from a lateral view, the following additional anatomical landmarks are visible: 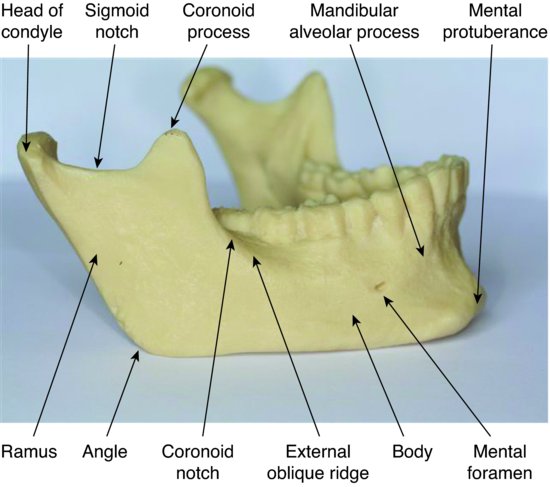 Looking at the mandible from a medial view, the following anatomical landmarks are visible: