A girl who was 11 years, 7 months old had a disto-occlusion of ½ a premolar width, a deep bite, and an overjet of 7 mm. Her facial configuration was fairly normal, although her mid-face had developed relatively far to ventral. At rest she held her lips together and no deviant functional conditions were noticed. An ALD of +1 mm was measured in the mandible, with +6 mm in the maxilla. The space in the maxillary arch was not equally disposed, with crowding anteriorly but excess space in the posterior regions that could be attributed to the persistence of the deciduous second molars, which would be succeeded by narrower premolars (Figs 7.1 and 7.2). 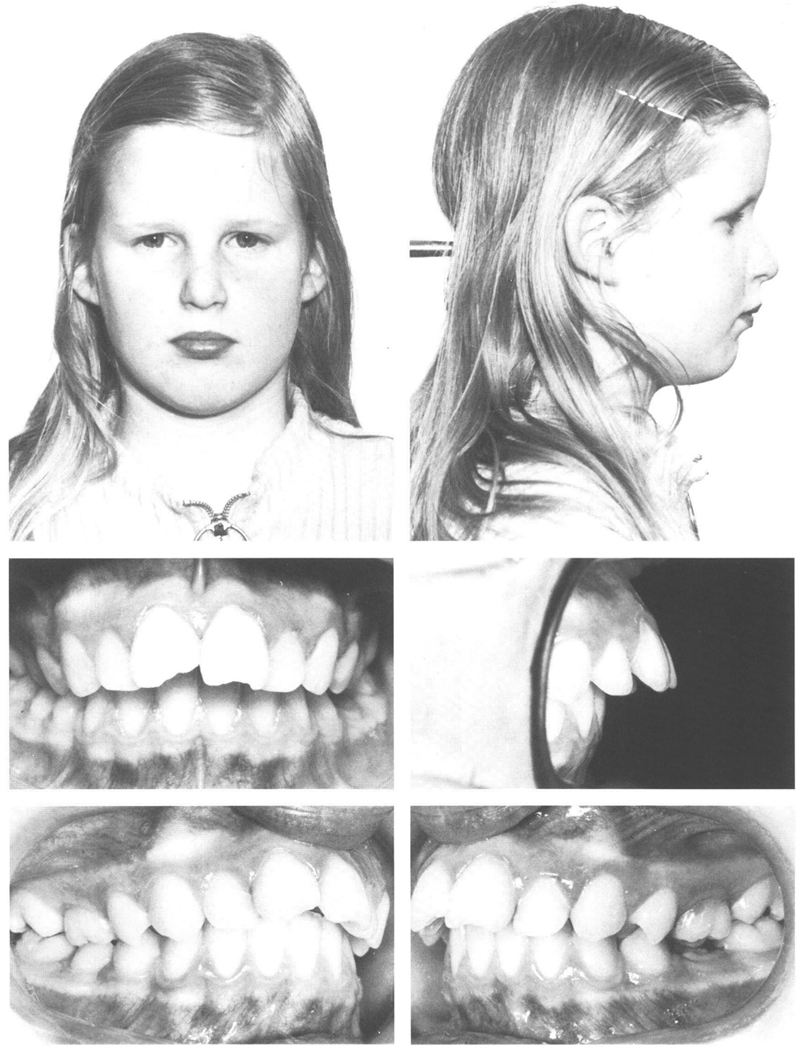 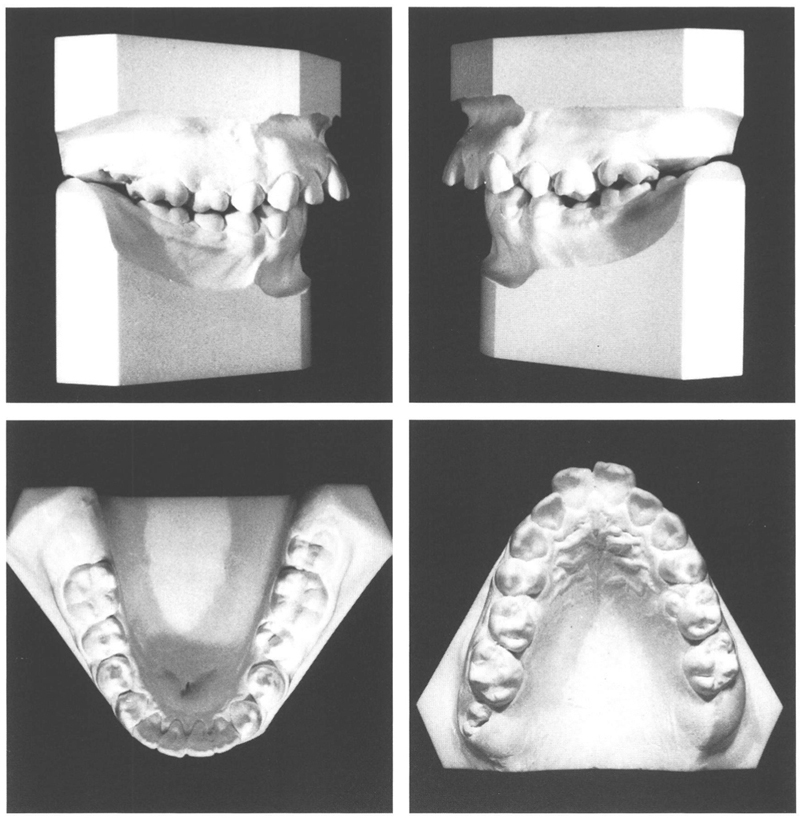 Fig 7-1 and 7-2 A girl who was 11 y, 7 mo old had a class II/1 anomaly (½ PW), good lip seal, and normal functional conditions. Both maxillary central incisors were fractured in an accident and required endodontic treatment. The overjet is 9 mm. There is crowding in the maxillary arch in the anterior region but excess space in the posterior regions where the second deciduous molars have yet to be replaced by the narrower premolars. The mandibular arch is more or less normal.

It was decided to provide orthodontic treatment by means of a cervical headgear and a removable plate for the maxilla. At the age of 11 years, 8 months, the maxillary first molars were banded and a cervical headgear fitted with instructions to wear it at night time plus some hours each day, in total 14 hours per day. Any mesial movement of the maxillary first permanent molars following the loss of the second deciduous molars had to be prevented. In addition, the headgear was used to rotate the banded first molars, and traction was applied to the maxillary complex through which to slow down the ventral growth of that structure. Six months later, a plate was fitted to the maxilla, the objective of which was first to move the premolars distally while simultaneously reducing the overbite. Subsequently the canines were to be retracted, followed by the incisors. The procedure followed for this will be described fully in the second half of this chapter.

After two years and one month, a satisfactory result had been achieved and active treatment was halted. The profile had improved, functional disturbances were absent, and the dental arches were in optimal occlusion, so that no retention was deemed necessary (Figs 7.3 and 7.4). A displacement of the midlines of the dental arches occurred and has increased since then, but it does not cause the patient any concern. The records collected thirteen years later support that conclusion. Apart from minor tertiary crowding in the mandibular incisors, there had been little change (Figs 7.5 and 7.6). It was apparent however from the superimposed cephalometric tracings that after treatment the maxillary and mandibular incisors had moved labially and the first permanent molars tipped mesially, which nonetheless had no deleterious effect on the profile (Figs 7.7 and 7.8). 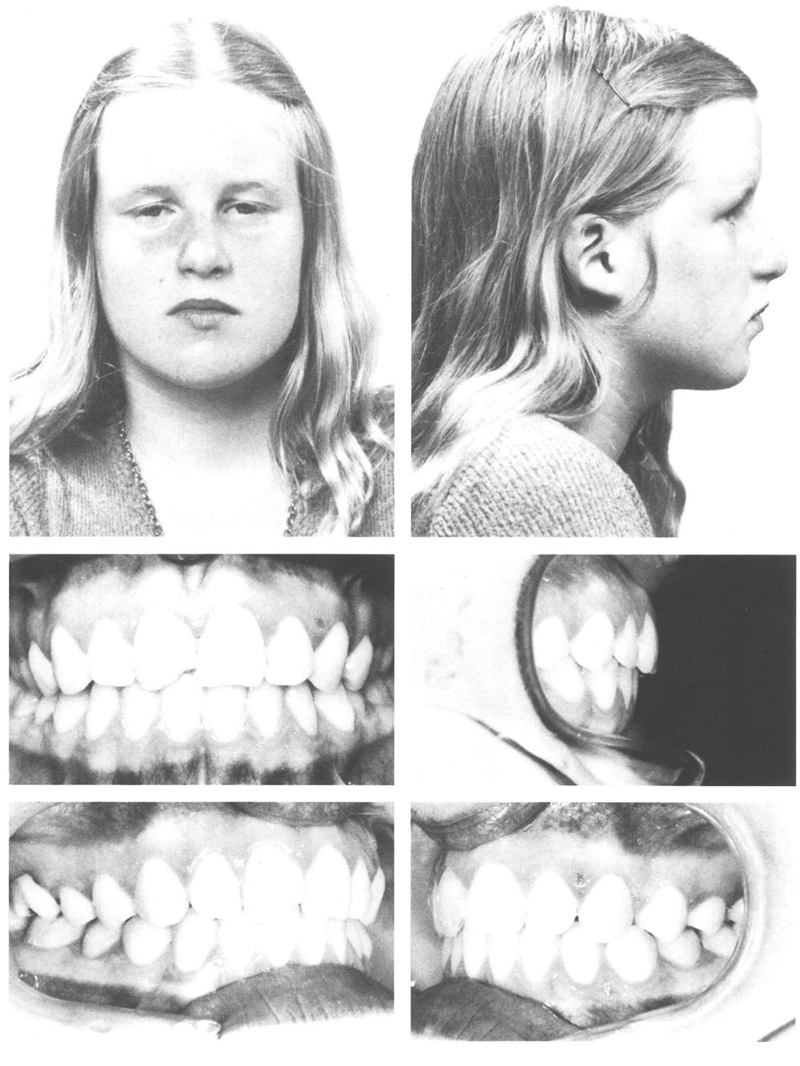 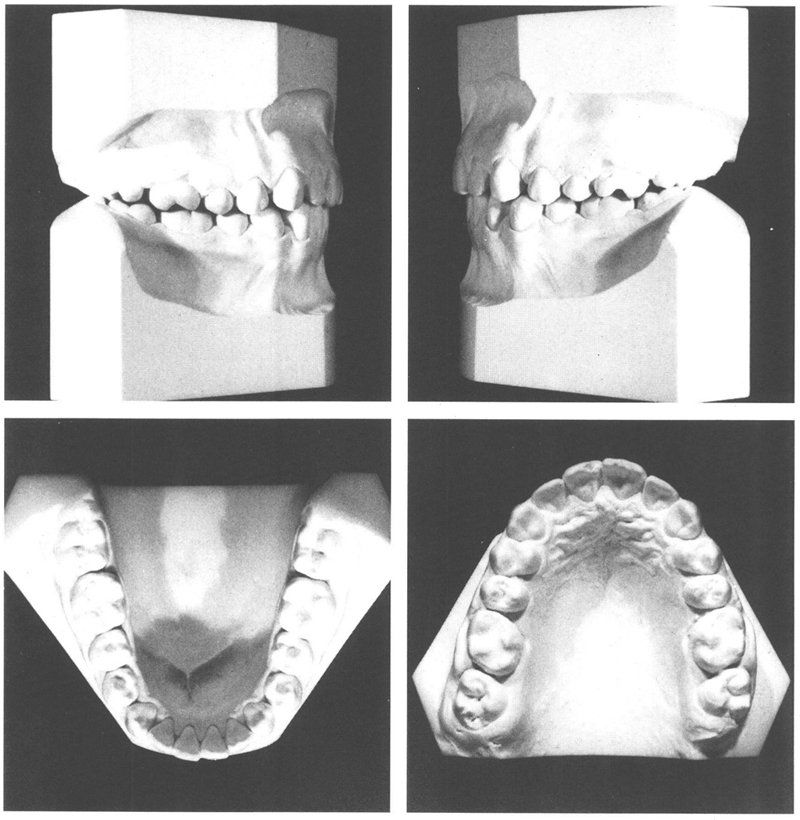 Figs 7-3 and 7-4 At the age of 13 y, 10 mo the treatment was finished. A good result had been achieved with simple means. A solid interdigitation of the canines and premolars provides consolidation of the result of the facial-orthopedic therapy. The good interdigitation was partly realized by rotating the first permanent molars, thus reducing the amount of space they occupied in the dental arch and improving the way they occluded with their antagonists. 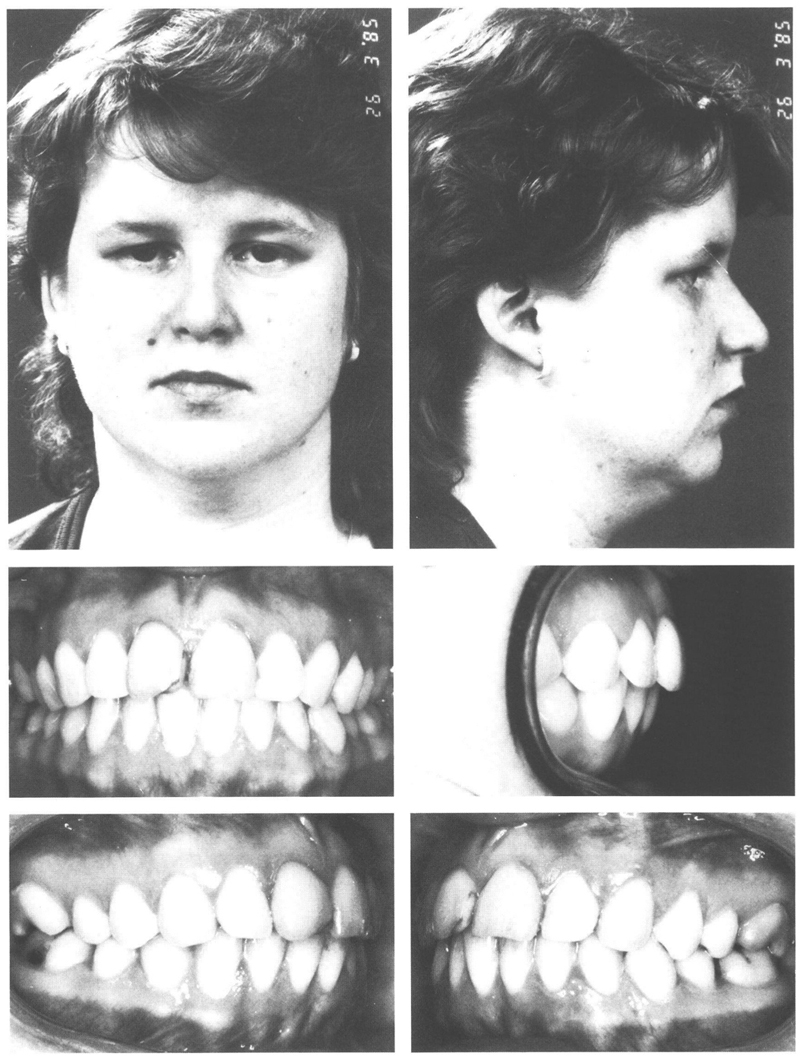 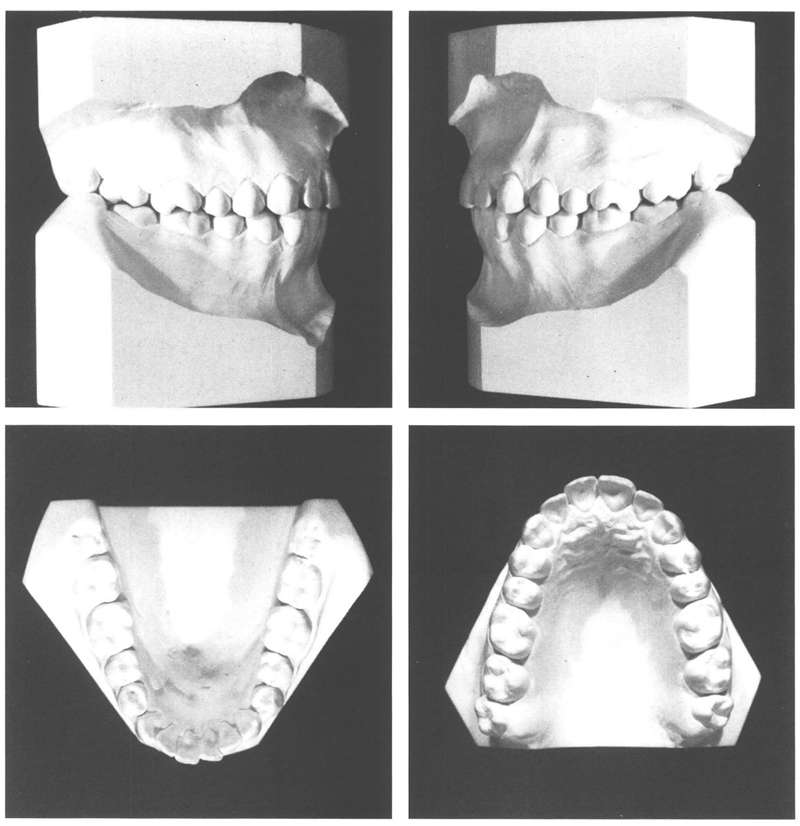 Figs 7-5 and 7-6 At the age of 26 y, 10 mo, 13 years after treatment was finished, the result is still satisfactory. The limited crowding of the mandibular incisors is of no concern. That applies also to the inadequate restoration of the fractured mesial incisal angle of the maxillary right central incisor, although at present, a simple yet most esthetic solution would be possible with composite resins.25 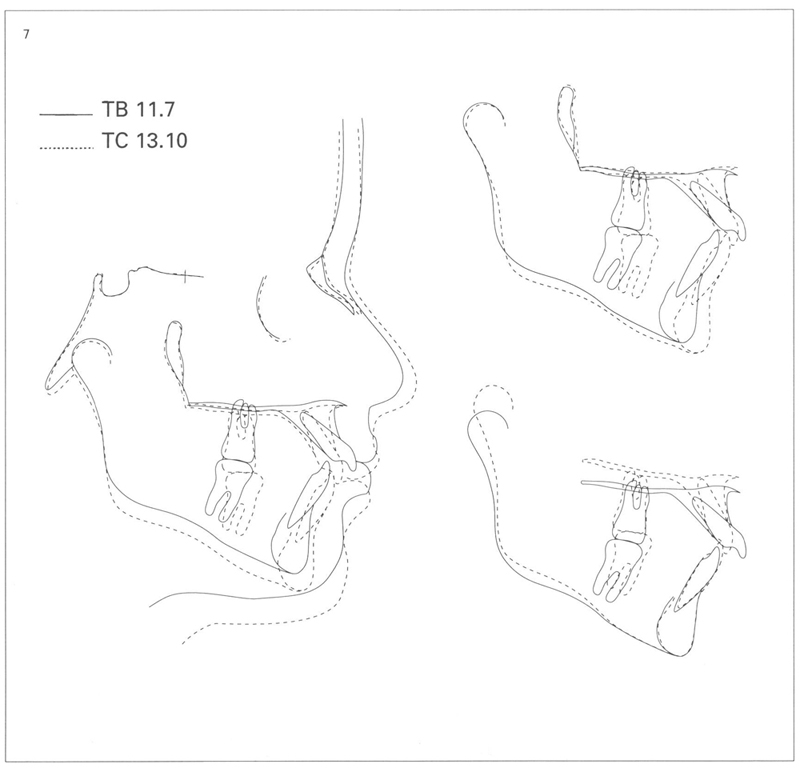 During treatment,the maxillary complex did not move ventrally, while the incisors were retracted. The mandible has developed to ventral, principally through condylar growth which has resulted in a notable increase in the length of the rami. The inclination of the lower border of the mandible has not become steeper. The face has grown a little since completion of treatment. The lower part of the face has increased little in height. The incisors in the maxilla have tipped forward but so have those in the mandible. 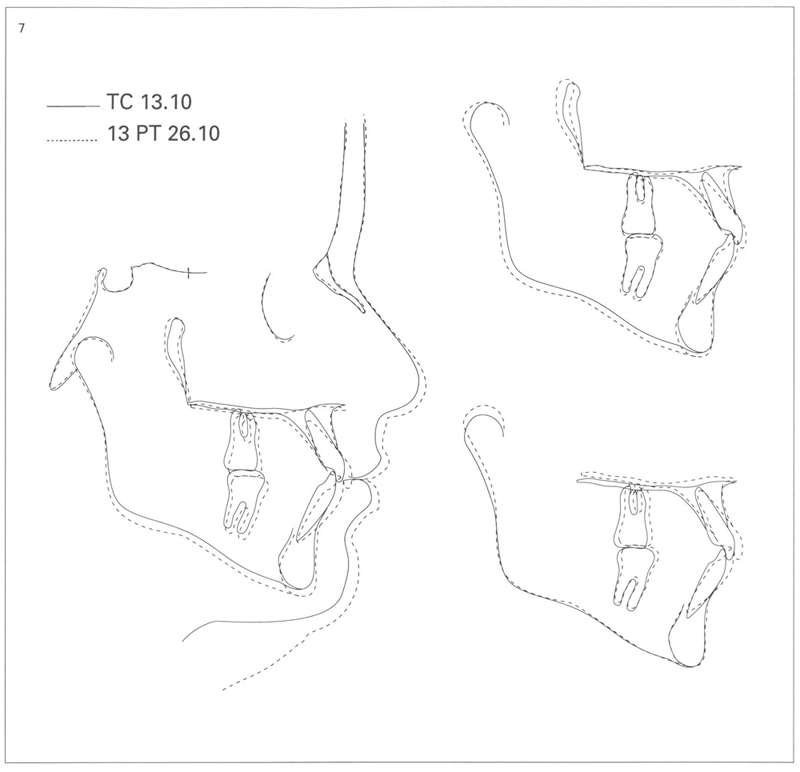 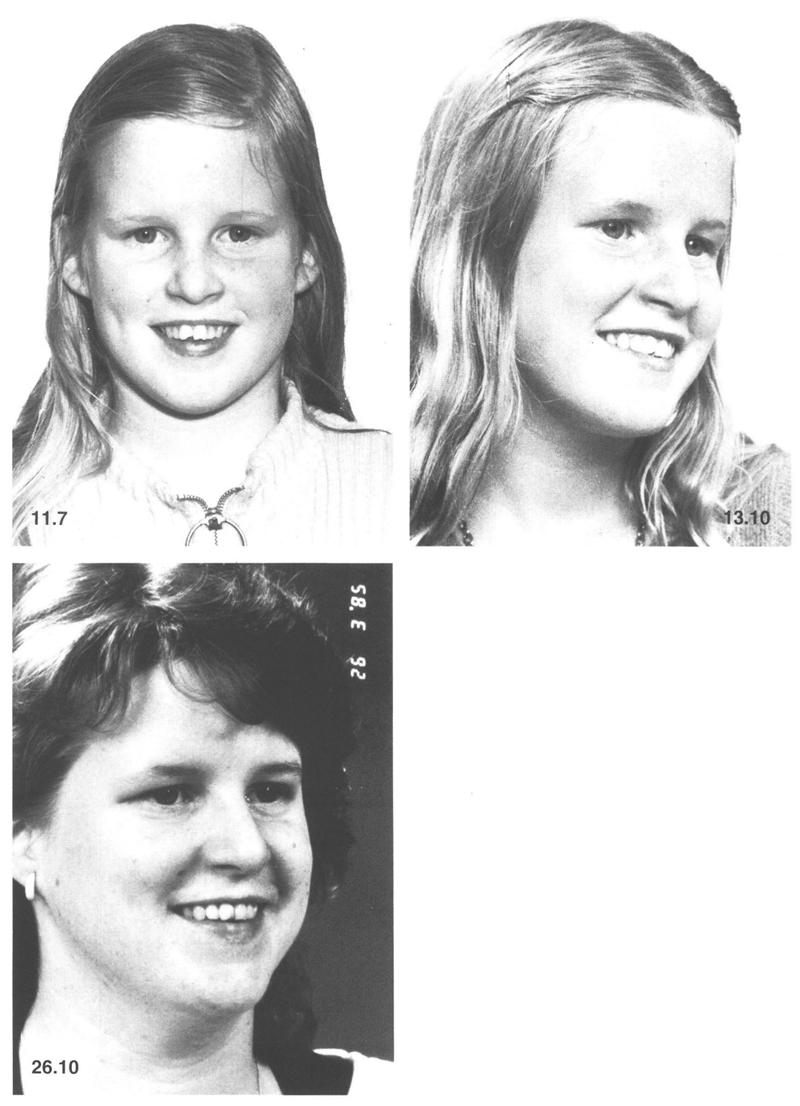 Fig 7-8 The improvements obtained and the stability of the result are evident.

It might be added that with the composite resins now available, the appearance of the maxillary central incisors could have been improved. In general terms it is sometimes possible to secure improvement just by judicious grinding of incisal edges.

The choice to treat this case with a headgear and maxillary removable plate was made because it is possible to rotate the maxillary first permanent molars and to use the space gained in the region of the premolars to improve the position of the anterior teeth. There was not only a need for the extra space to eliminate the crowding but also to permit retraction of the incisors over quite a distance. Since they were markedly inclined labially, retraction of the incisors by tipping them palatally with the labial arches of the plate was quite appropriate. If the incisors had not initially been labially inclined this could have led to their undesirable palatal inclination (see Chapter 11).

In every correction of a disto-occlusion that possesses a good transverse relationship, with vertical contact between the opposing teeth in the posterior regions, it is essential to provide conditions to allow the teeth in the maxillary arch to move buccally under the influence of the rail mechanism as the mandibular arch moves ventrally relative to the maxillary arch (Fig 7.9). If a headgear is used in combination with a plate then the design of the plate, and the periodic addition to the height of the bite plane should be in accordance with the realization of the rail mechanism. 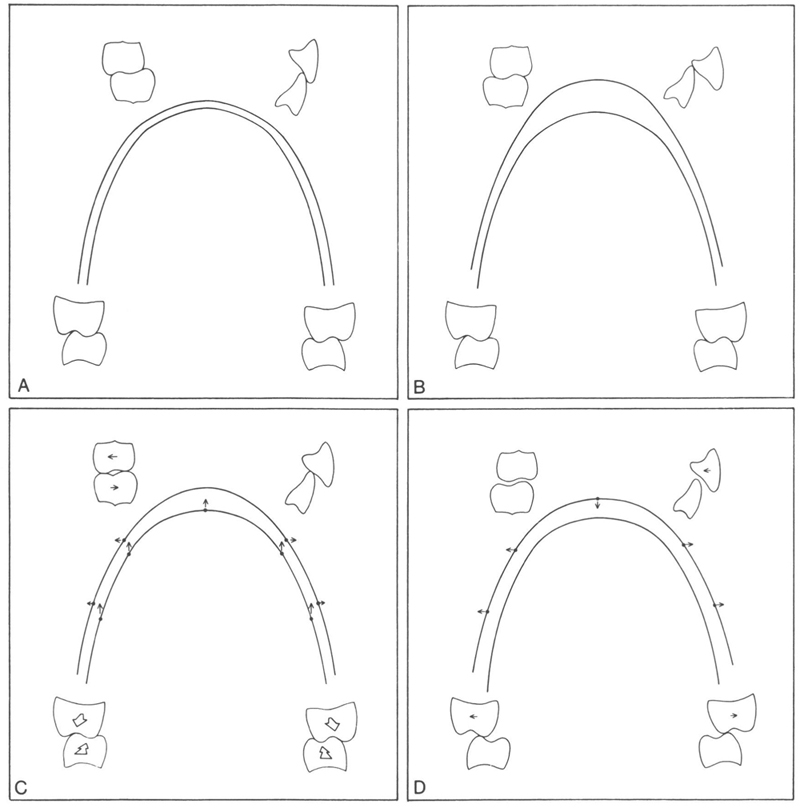 Fig 7-9 Diagrammatic depiction of the sagittal, transverse, and vertical occlusion of the mandibular and maxillary dental arches under different circumstances.

C If the occlusion of the posterior teeth in a class II/1 anomaly is corrected, the maxillary arch becomes wider due to the teeth in the mandible contacting those of the maxilla more mesially. In headgear therapy with a changing jaw relationship, the increase in arch width is stimulated every time the teeth are closed together. In activator treatment, the latter only happens during the day, because the appliance is not worn at that time. If a headgear is combined with a biteplate, then the biteplane should be only slightly />