A girl of 10 years, 8 months with a broad, round face, a ventrally developed midface, and a dorsally placed chin exhibited a serious class II/1 anomaly with ¾ PW disto-occlusion. The lower lip at rest was located behind the maxillary central incisors and against their incisal edges. She could breathe easily through her nose. The overjet was 10 mm and the mandibular incisors were in contact with the palatal mucosa. There was slight crowding in both dental arches (Figs 18.1 and 18.2). 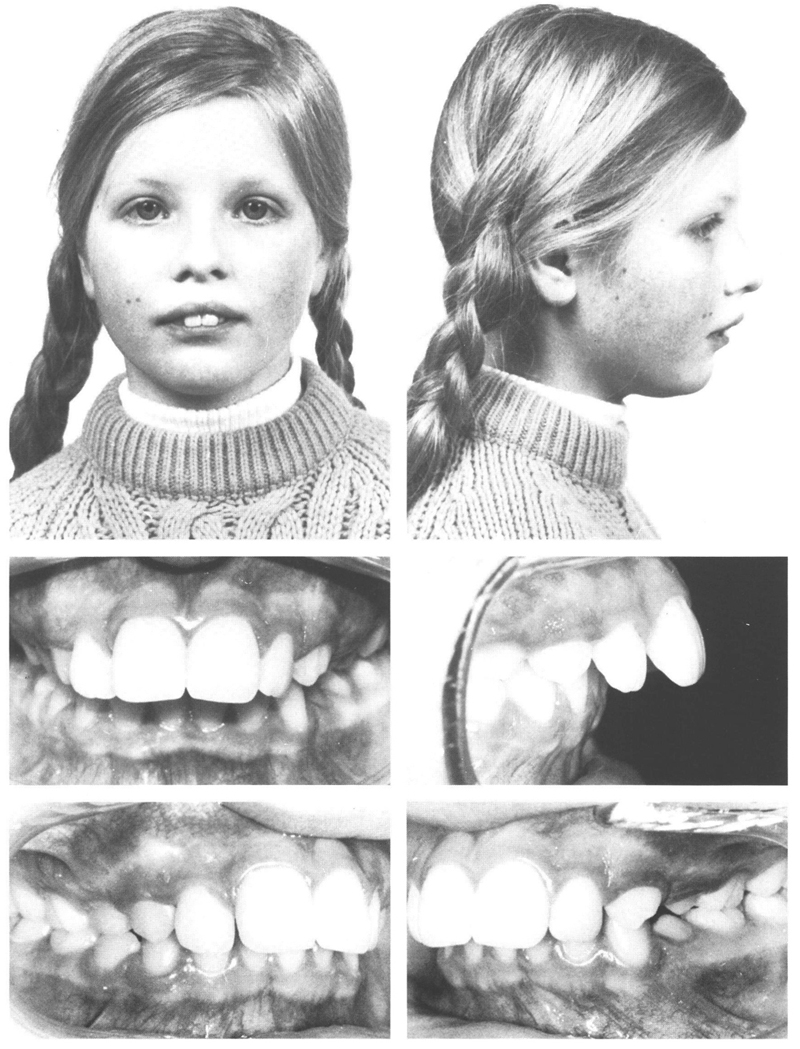 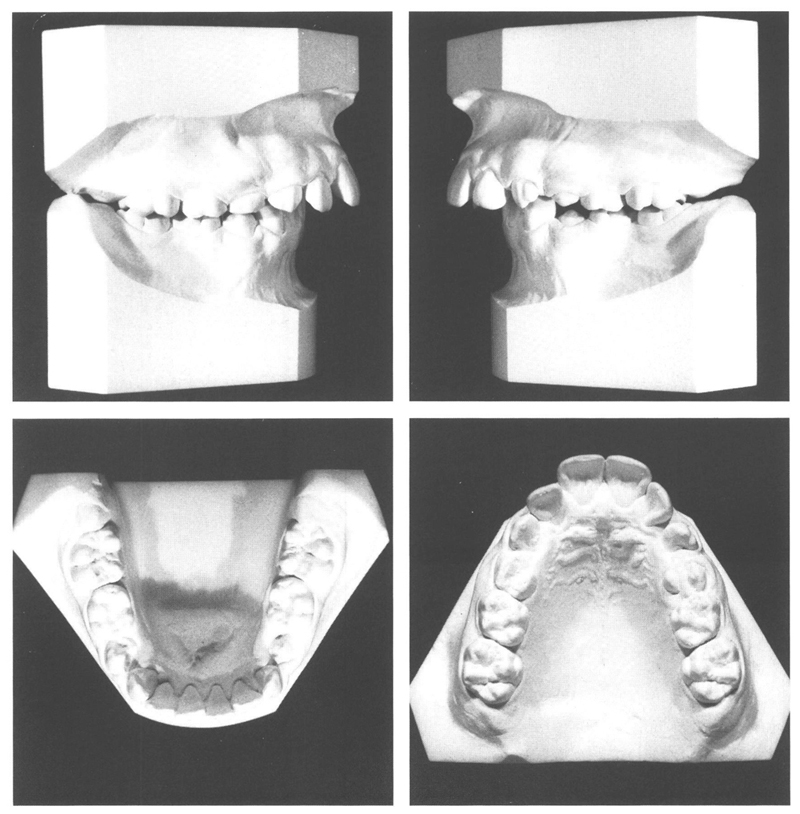 Taking into consideration the crowding in the maxillary arch, it was decided to correct the sagittal jaw relationship with a cervical headgear. If later on the patient could not hold her lower lip in front of the maxillary incisors, then a lip bumper would be applied in the mandible. A removable plate might be fitted later to the maxillary arch, followed by brackets on the incisors with an archwire designed to provide their controlled retraction.

At the age of 10 years, 10 months, the cervical headgear was fitted. After 8 months, a lip bumper was indeed provided in the mandible. A plate in the maxilla was not found necessary since the premolars and canines had spontaneously migrated distally and the depth of bite had decreased. Brackets were placed on the maxillary incisors and those teeth were retracted with an archwire of .019” × .026” following a .0175” twistflex arch. The retraction was performed with control of axial inclination and combined with some intrusion. At the age of 12 years, 7 months, after treatment of one year and nine months, all apparatus was removed and the maxillary canines were slightly ground incisally to correct their shape and location. Retention was considered unnecessary in view of the solid interdigitation and the normal relationship between the lower lip and the maxillary incisors. The facial improvement was striking even though the mouth still regularly was kept open. The maxillary incisors were a little too steeply positioned and made contact with the mandibular incisors. The crowding in the mandibular incisors had barely changed but the deep bite was eliminated. The alignment of the maxillary canines and one or two other teeth left something to be desired (Figs 18.3 and 18.4). 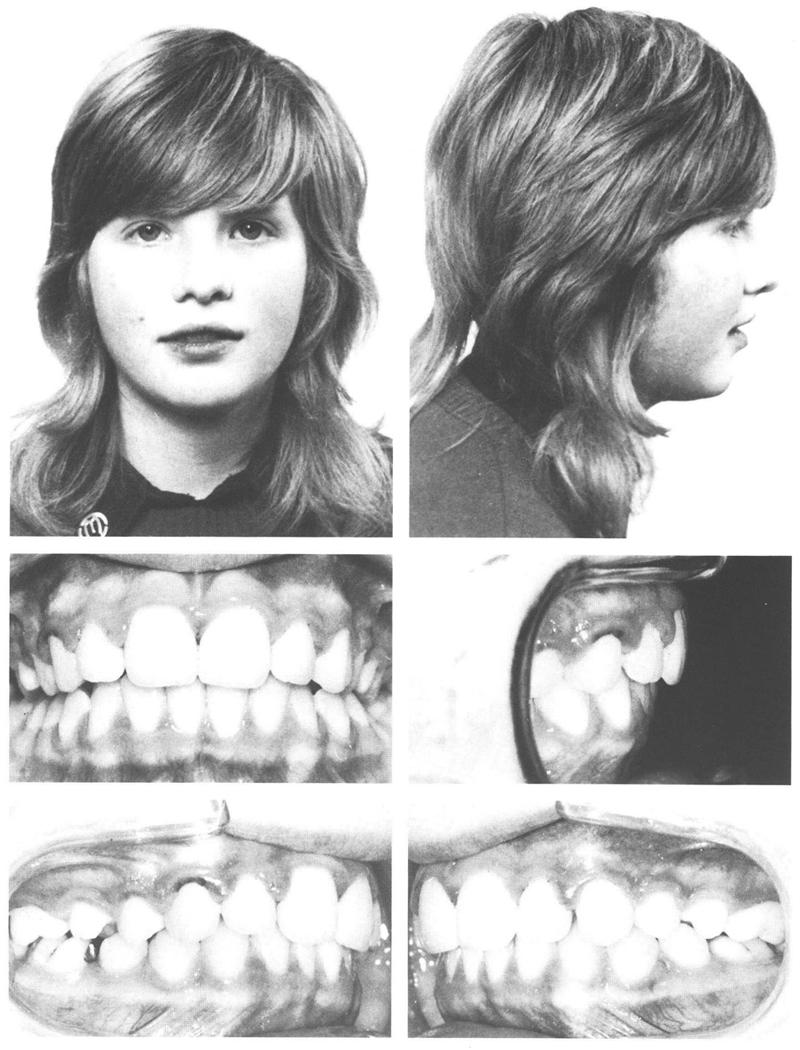 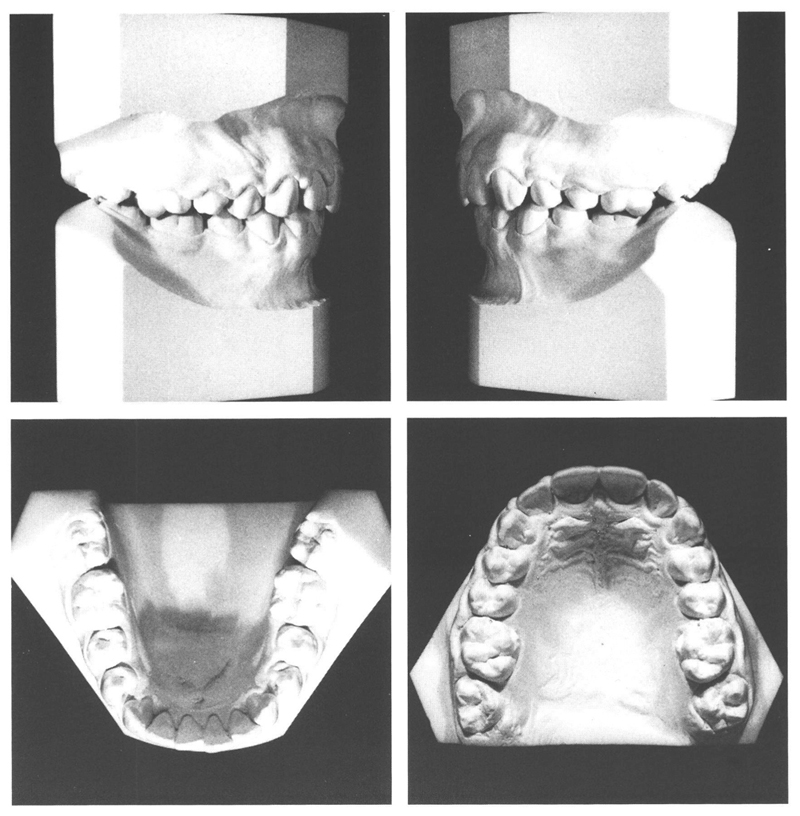 Figs 18-3 and 18-4 At the age of 12 y, 6 mo, the appearance of the patient’s face and dentition is quite different. A serious anomaly has been corrected in a short time with simple means. The shortcomings of the appliances are mostly to be seen on the dental casts. The mandibular left first permanent molar has been tilted to lingual by the lip bumper. Such an effect is easily brought about, especially when the mandibular molars are tipped distally. An advantage of this is that the overbite is reduced. The alignment of the mandibular anteriors is not improved. The left maxillary canine is less rotated now than it was shortly after emergence. A limited mesiopalatal rotation of maxillary canines often is acceptable although rotation mesiolabially is not. The same applies to canines that are steeply positioned; it is often judicious not to attempt correction of the situation, the more so because complex appliances are required for uprighting movements and complications are inevitable.

Two years later, it appeared that some of the shortcomings resulting from the appliances used had corrected spontaneously. Moreover the occlusi/>