A girl aged 10 years 4 months exhibited a class III anomaly with an underdeveloped maxilla, a slightly large lower face, the lower lip in advance of the upper, and a dominant chin. The mandibular lower border was very steeply angulated and was almost in line with the posterior border of the ascending ramus. The left side of the mandible was longer and higher than that on the right, which caused the lower part of the face to be asymmetric. The chin point and the middle of the mandible deviated to the right. During opening and closing movements of the mandible the asymmetry remained constant. Habitual occlusion and central relation coincided and there was no ventral forced bite. The anteriors were in an edge-to-edge occlusion on the left side and in a reversed overbite on the right side. Two millimetres of gum was exposed in the maxillary anterior region when smiling. The anomaly had already been treated with a chincap for 18 months without any noticeable improvement (Figs 38-1 and 38-2). 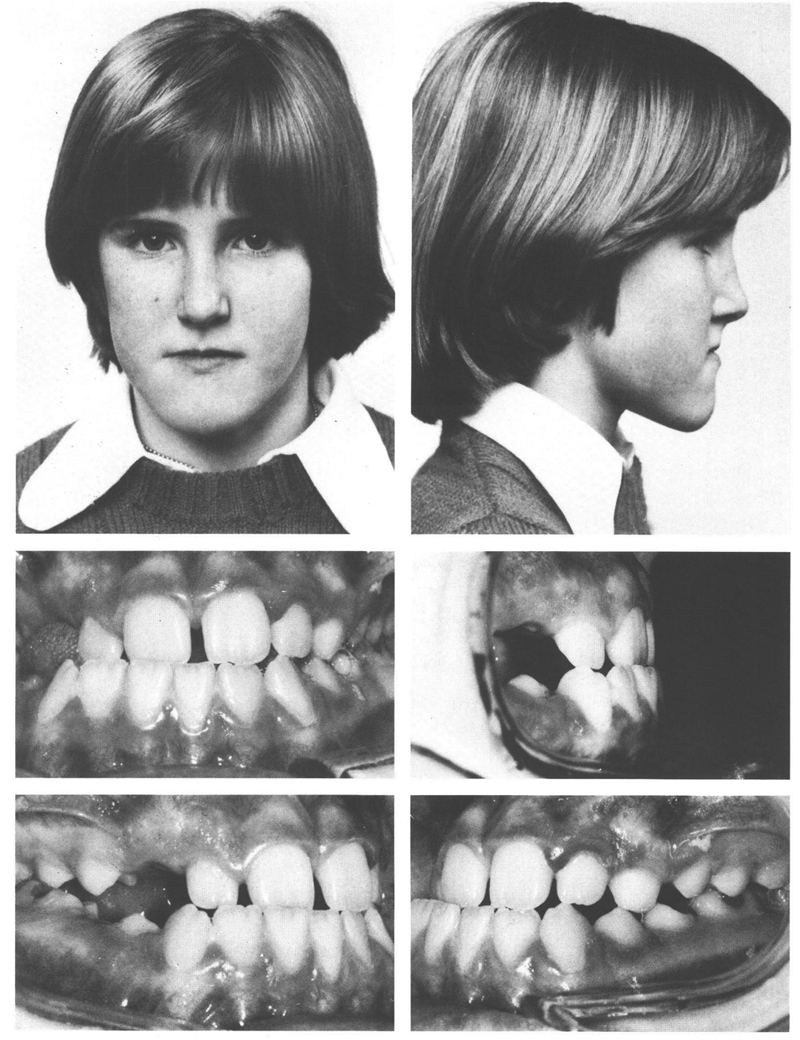 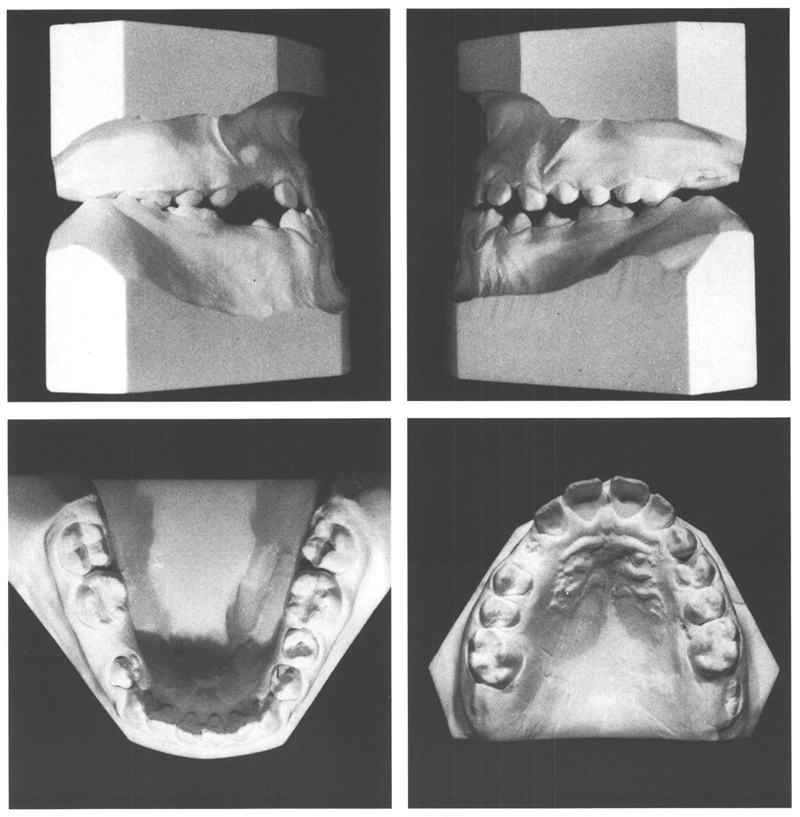 Figs 38-1 and 38-2 A girl aged 10 y, 4 mo with a class III anomaly, a prominent lower lip, a dominant chin, and facial asymmetry. The mandible is long and the angle between the lower border of the body and the posterior border of the ramus is about 150 degrees. The left half of the mandible is longer and higher than the right. The chin and the middle of the mandibular dental arch deviate to the right. The dental arches are well formed and have sufficient space for all the teeth. The mesio-relation of the jaws is associated with a mesio-occlusion of ½ PW on the left and 1 PW on the right. The right side of the maxillary arch is contained within the mandibular arch and on the left the maxillary incisors and canine are positioned directly above their antagonists.

It was decided to attempt to stimulate the ventral development of the maxillary complex twith use of a facial mask according to Delaire, with the complementary force in a dorsal direction on the mandible. The chance of success was limited, considering the form of the mandible and the fact that the earlier treatment with the chincap had not been a success. Orthodontic and surgical intervention at a later age was taken into consideration bearing in mind that the asymmetry of the mandible could not be corrected with facial-orthopedic means.

At the age of 10 years, 9 months, the first permanent molars and first premolars in the maxilla were banded with appropriate tubes, hooks were attached, and a maxillary plate was provided. Elastics were used between the first molars and premolars and a facial mask. After six months, a neutro-occlusion had been achieved with an adequate overjet and overbite. The traction on the maxilla was not reduced since there was not yet a solid interdigitation in the premolar areas. At the age of 12 years, 2 months, the patient was asked to wear the appliances every alternate night only, but after two months the occlusion had deteriorated, so the appliance was worn every night. Three months later, an acceptable situation had been regained (Figs 38.3 and 38.4). Once more wearing was changed to alternate nights but yet again nightly wearing had to be resumed because the ventral development of the maxilla remained behind that of the mandible and the posterior teeth were tending to move into crossbite. Once neutro-occlusion was established again, the apparatus was still worn every night. This could not prevent the development ventrally of the maxilla lagging behind that of the mandible. The chin became more dominant and it was clear that an acceptable result could not be reached without surgery. 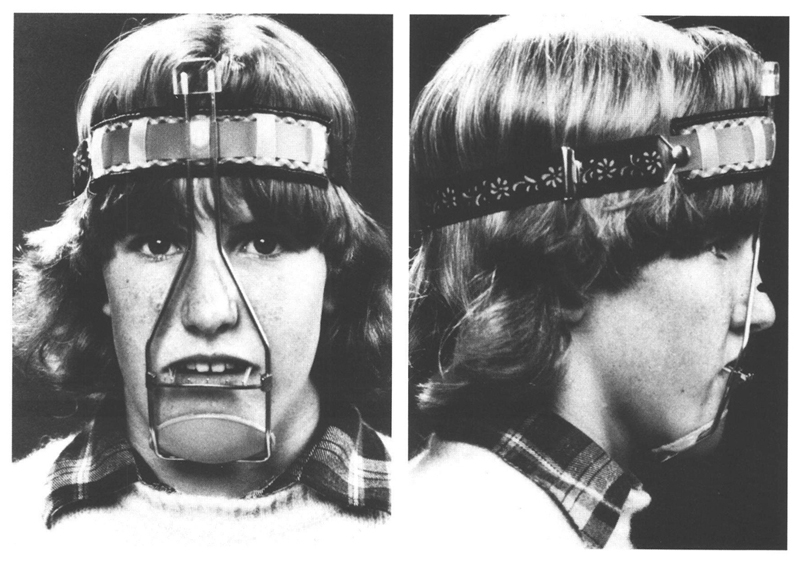 The appliance is supported by the chin and forehead. The parts of the vertical bars that run parallel above the bridge of the nose need to be contoured to the curvature of the forehead. Then they can be shortened so as not to project above the forehead. The horizontal component in front of the mouth can be moved up or down to the desired position and then secured with the screws. It carries five short projections with ball-ends, which are used to attach elastics. The posts used depend on the width of the mouth and the way the elastics run along the maxilla.

Besides the model illustrated here, there is another facial mask available that runs lateral to the eyes, and this one is more acceptable if the appliance needs to be worn when the patient is not in bed (see Fig 36-17C). 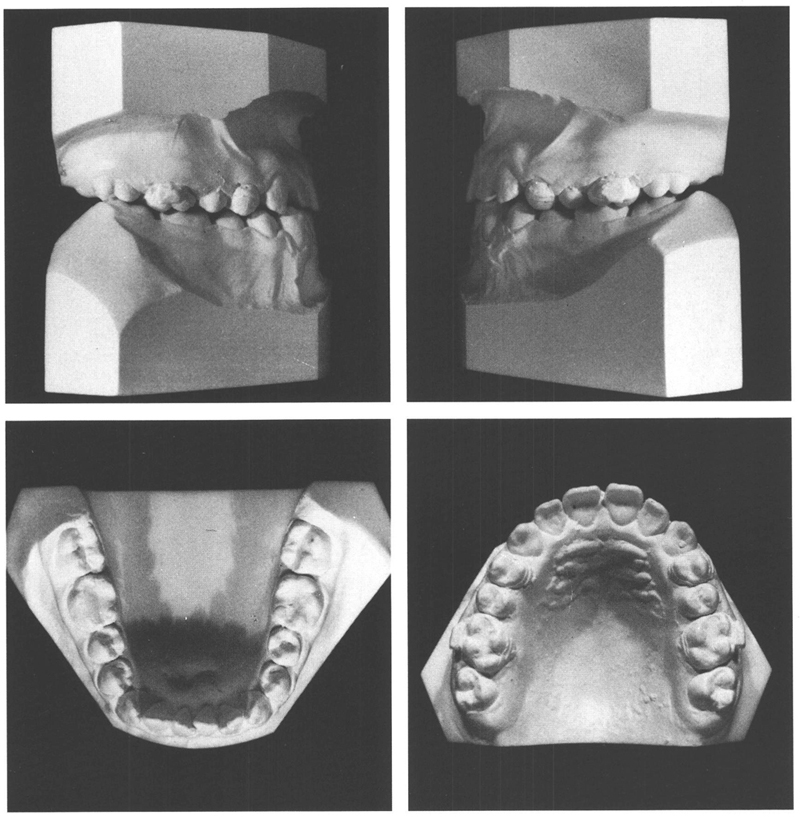 Fig 38-4 At the age of 12 y, 7 mo, a reasonable result has been obtained. The first permanent molars and premolars interdigitate properly sagittally and transversely, and the incisors are in normal contact. The crowding in the mandibular anteriors has increased.

This result proved not to be stable, as became apparent when the appliance was worn less. The ventral development of the maxilla lagged behind tha/>