A boy aged 11 years, 7 months exhibited a class II/1 anomaly and anterior open bite. He had a long, narrow face, a small nose, an increased lower-face height with a retruded chin, and a steeply inclined lower mandibular border. When relaxed, his mouth was open and his tongue lay between the maxillary and mandibular incisors. He had sucked his thumb until he was nine years old. His short upper lip was almost functionless, while the lower lip was everted and had no contact with the maxillary incisors. Despite a clear nasal airway, he breathed through his mouth most of the time (Figs 26.1 and 26.2). 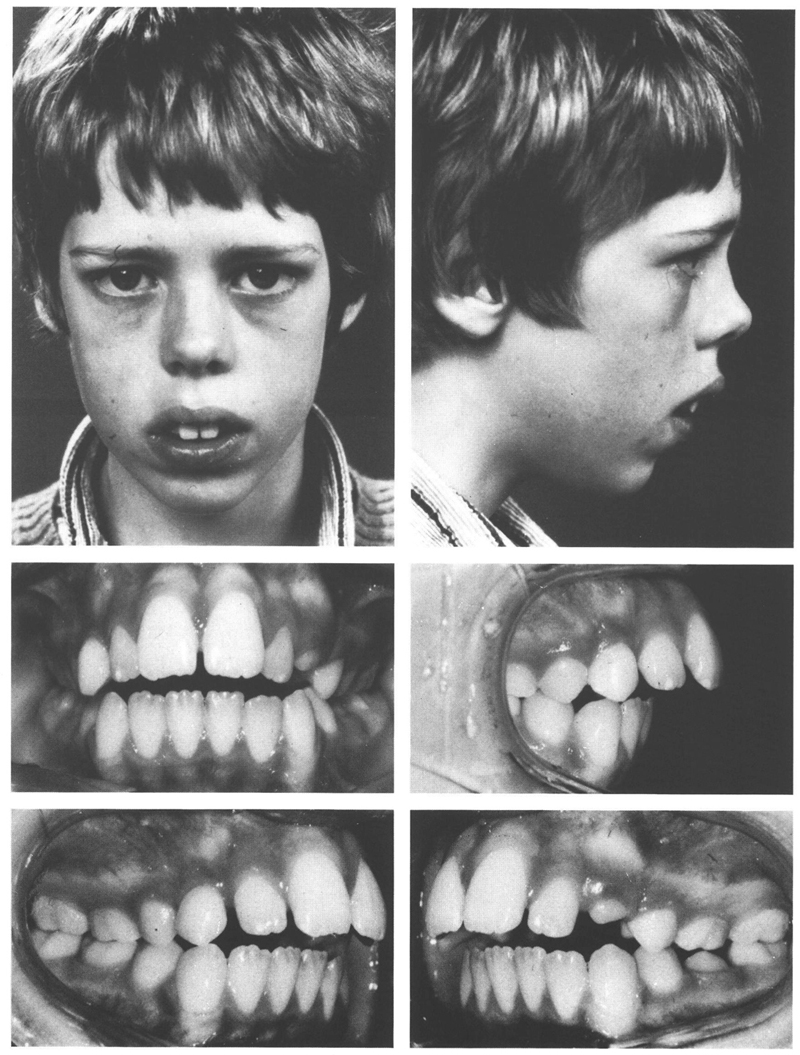 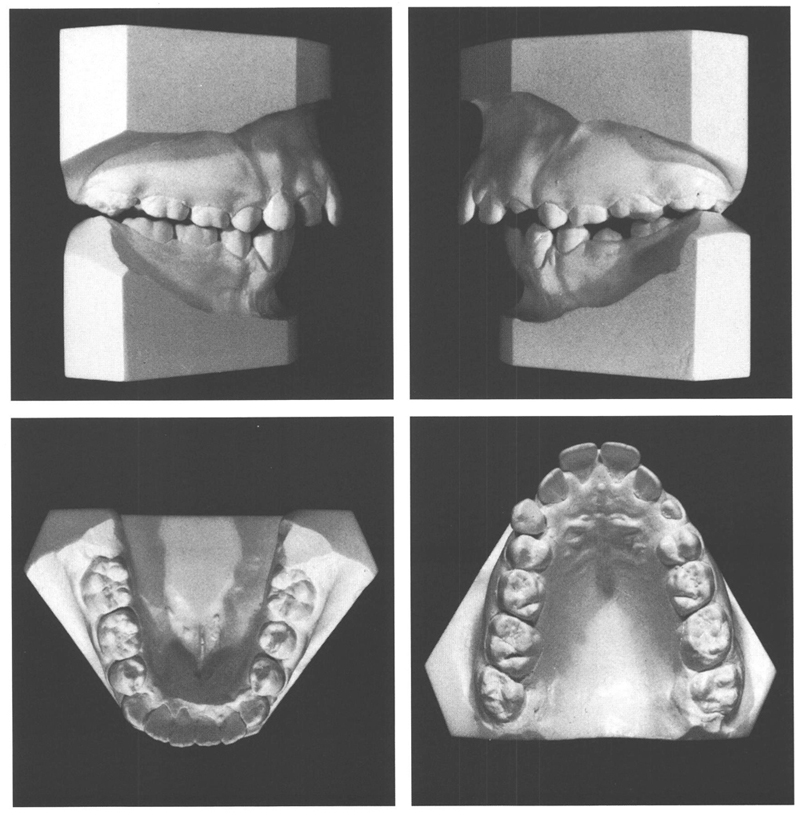 Figs 26-1 and 26-2 A boy aged 11 y, 7 mo with a long, narrow face, an excessive lower-face height, and a receding and underdeveloped chin. He made little use of his oral musculature; his mouth was always kept open. A disto-occlusion of about 1 PW (left a little more than on the right), is combined with a pronounced eversion of the maxillary anteriors, an overjet of 11 mm and an overbite of –2 mm. The mandibular dental arch is normal, the maxillary arch is narrow but matches the mandibular arch buccolingually. Diastemata are present between the maxillary incisors. The maxillary right deciduous canine is loose, and the maxillary permanent canine on the left has already emerged.

Taking into account the excessive lower-face height and the inadequate lip seal, it was decided to correct the disto-occlusion with a parietal headgear. At a later stage a removable plate would be used in the maxilla to move the premolars and canines distally and to retract the maxillary incisors.

At the age of 12 years, 8 months, the headgear was fitted, and within a short time an obvious improvement was secured. Eight months later, the maxillary second deciduous molars were superseded by the premolars. There and elsewhere in the dental arch was spacing. At that juncture a plate was provided (see Figure 7.12). It was used first to move distally the premolars and subsequently the canines; finally, the incisors were retracted and the anterior spaces closed. At the age of 13 years, 1 month, after a treatment time of one year and five months, a satisfactory result had been obtained and all appliances were removed. No retention was used. A good occlusion and solid interdigitation of the posterior teeth were realized, and the maxillary anterior teeth were almost in contact with the mandibular ones. The perioral musculature had changed little; the mouth still remained open, the upper lip was scarcely used and mouth-breathing persisted (Figs 26.3 and 26.4). 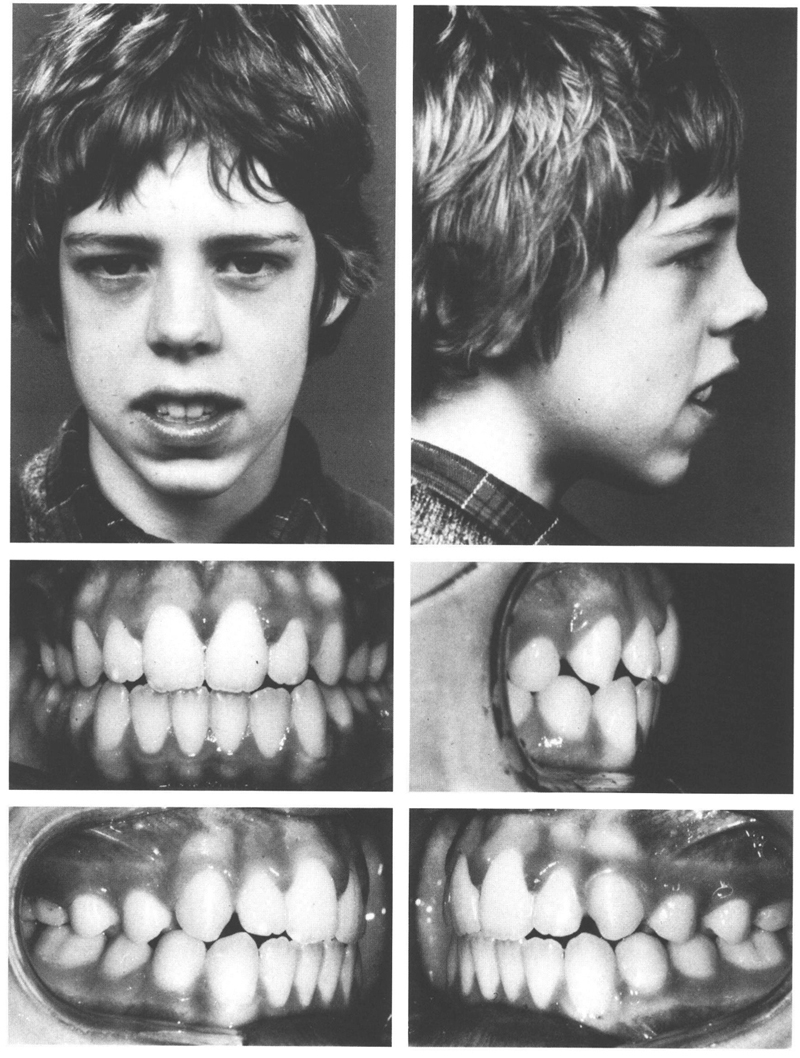 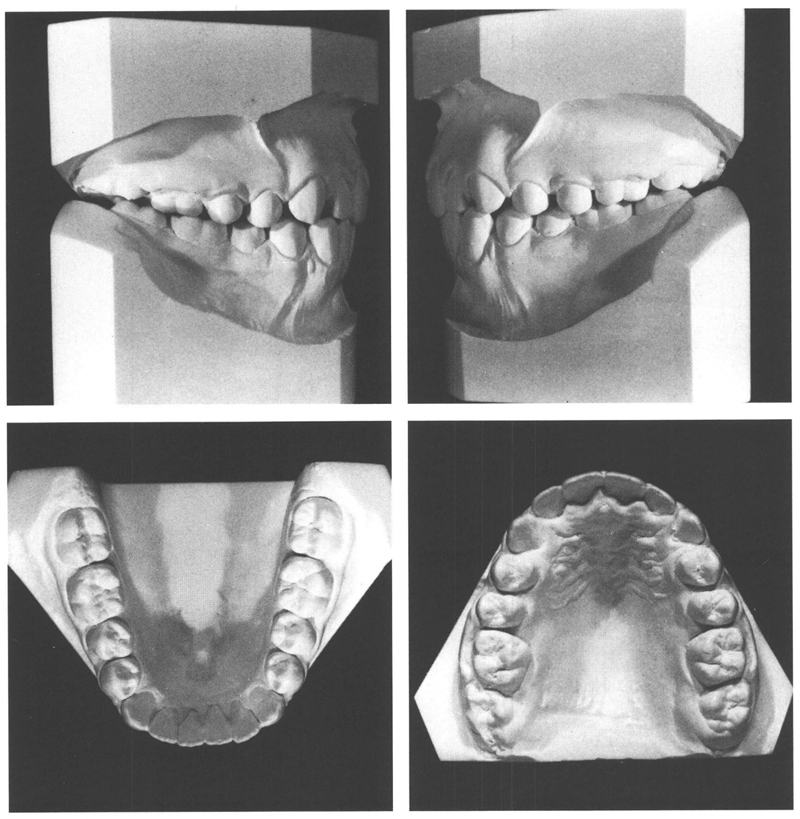 Figs 26-3 and 26-4 At the age of 13 y, 1 mo, the disto-occlusion has been corrected without any obvious improvement in facial appearance. The open mouth, atonic and immobile upper lip, and the everted lower lip with a much exposed vermilion border continue to form a largely unattractive picture. The dental arches display few shortcomings and occlude well.

Four months after the conclusion of treatment, the maxillary incisors had moved a little to labial and the anterior diastemata had returned. He was advised to do lip exercises with a wooden spatula, and to try to keep his mouth closed as much as possible. Moreover, it was recommended that he applied sticking plaster at night to hold his mouth closed. By the next check-up eight months later, the maxillary anteriors were found to have moved more to labial. The patient said that he was afraid of suffocating if plaster was put over his mouth and he could not get around to d/>