A girl aged 7 years 3 months exhibited a class III anomaly. Her eyes were deeply recessed in her face, which was correlated with the lack of development of the midface to ventral. The mandible was not exceptionally large but the chin was the predominant feature in her face. There was no abnormal function except for a prognathic forced bite. When the mandibular dental arch in its most dorsal position was brought into contact with the maxillary arch, the mandibular incisors touched the maxillary incisors slightly labial to the incisal edges. As the teeth were closed further together the mandible slid ventrally before the posterior teeth made full occlusal contact. Both dental arches showed no signs of abnormality. There was a clear mesio-occlusion when in habitual occlusion (Figs 36.1 and 36.2). 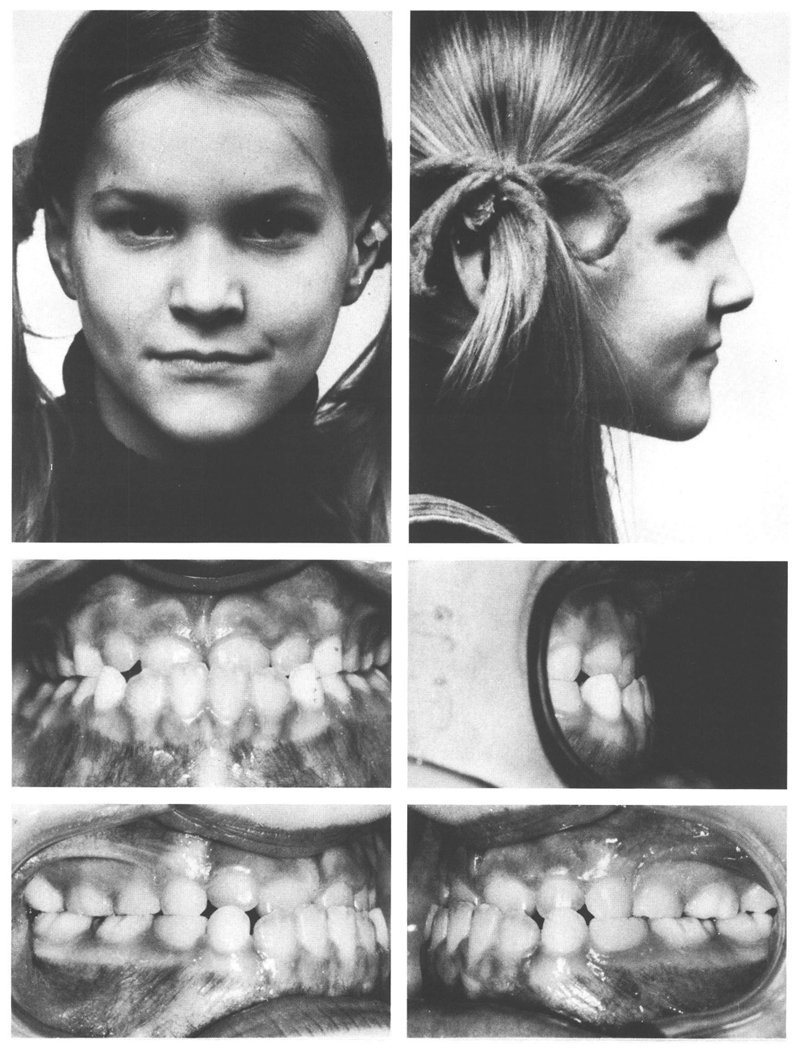 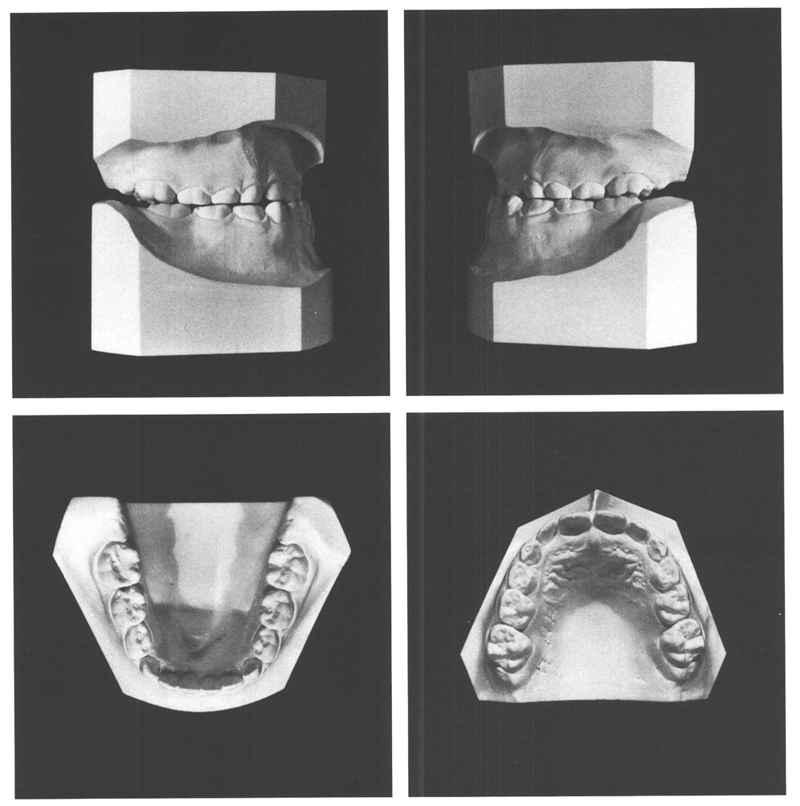 Figs 36-1 and 36-2 A girl aged 7 y, 3 mo whose midface lacked ventral development and whose mandible was not unusually large exhibited a mild class III anomaly combined with a ventral forced bite. When closing in the maximum retruded position, the mandibular incisors met the maxillary incisors a little labial to the incisal edges of the latter. The lower lip protruded slightly in front of the upper lip but the profile gave no real indication of there being a reversed overbite. The dental arches were free of abnormalities. In habitual occlusion, the mandibular arch was located slightly mesial in relationship to the maxillary arch, more on the right than the left. This corresponded with a deviation to the left of the midline of the mandibular arch.

It was decided to stimulate the development of the maxilla, through which incidentally the abnormal occlusion and the ventral forced bite both could be corrected. For this purpose the first permanent molars had bands with buccal tubes cemented in place at the age of 7 years 4 months while the first deciduous molars were provided with bands bearing buccal hooks. Following this a plate was made for the maxilla which fitted the palatal surfaces of all the teeth accurately and bore 3/4 clasps that buccally engaged the first permanent molars and the first deciduous molars. Apically extending hooks of rectangular wire (.0125” × .027” were fixed into the molar tubes, reaching buccally about 5 mm above the cervical margins. These hooks could hold the elastics that would provide the force to ventral on the molars preferrably at the level of the centre of resistance of the molar roots. The elastics were stretched from the hooks on the molars and also first deciduous molars to hooks mounted on the vertical posts from a chin cap (Fig 36.17B). The patient was asked to wear the plate and the chin cap during sleeping hours only. The elastics were chosen so that each had a force of about 100 grams so that the total force exerted ventrally on the maxilla was approximately 400 grams.

After six months the midface had clearly moved forward and the class III anomaly with its ventral forced bite had been eliminated. There was good sagittal interdigitation of the posterior teeth. Retention was judged not to be necessary although the interdigitation of the well worn deciduous molars was not totally satisfactory (Figs 36.3 and 36.4). 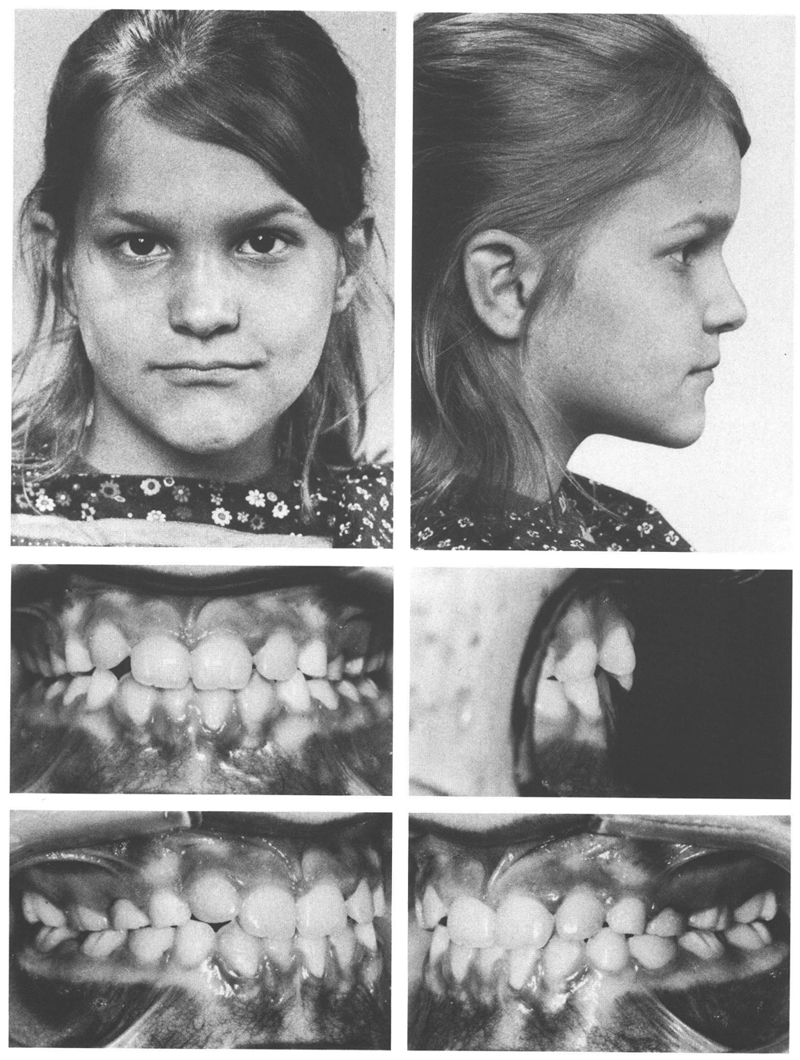 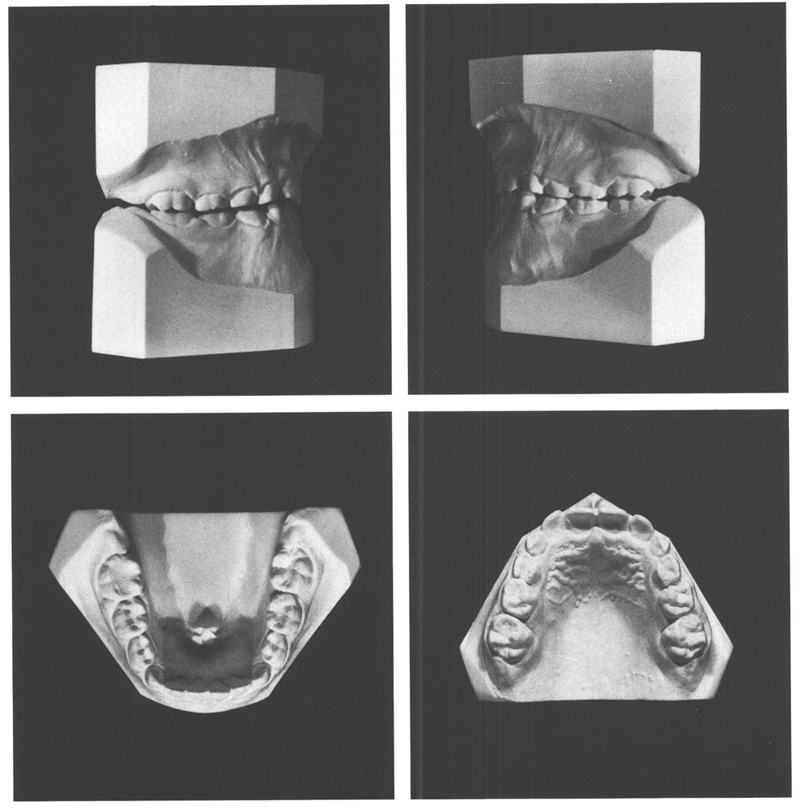 Figs 36-3 and 36-4 At the age of 7 y, 10 mo, the midface has clearly moved ventrally after treatment for six months. This change had been accomplished by wearing a chincap with vertical posts during sleep, with elastics from those posts to the maxillary first permanent molars and first deciduous molars applying forward traction. The teeth were held as well as possible in a solid unit with a maxillary removable plate. The class III anomaly and reversed anterior overbite have gone. The deciduous canines are in neutro-occlusion, although the first permanent molars are in edge-to-edge occlusion. This is accounted for by the fact that the deciduous molars, which have a greater mesio-distal width in the mandibular arch than in the maxillary arch, are still all present. During treatment, the maxillary lateral incisors tipped a little to labial, while the inclination of the central incisors hardly changed.

Two years later the jaw relation was more or less the same as when treatment concluded (Figs 36.5 and 36.6). The permanent canines, premolars and molars came into neutro-occlusion after emergence (Figs 36.7 and 36.8). 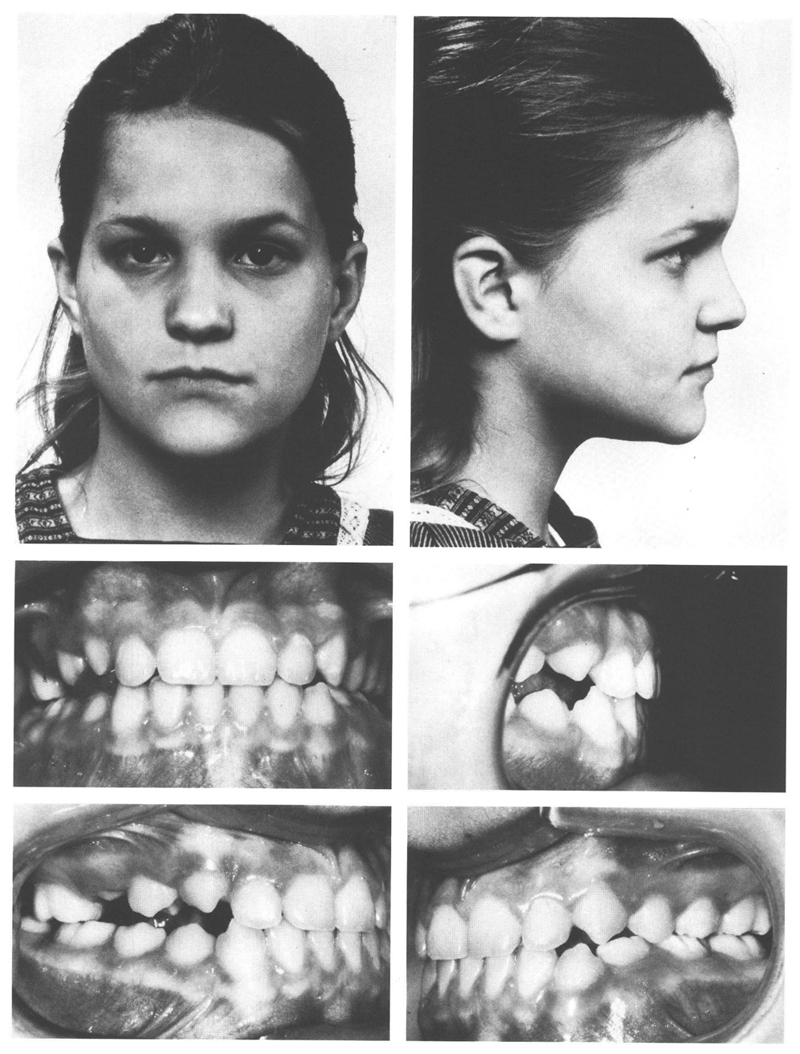 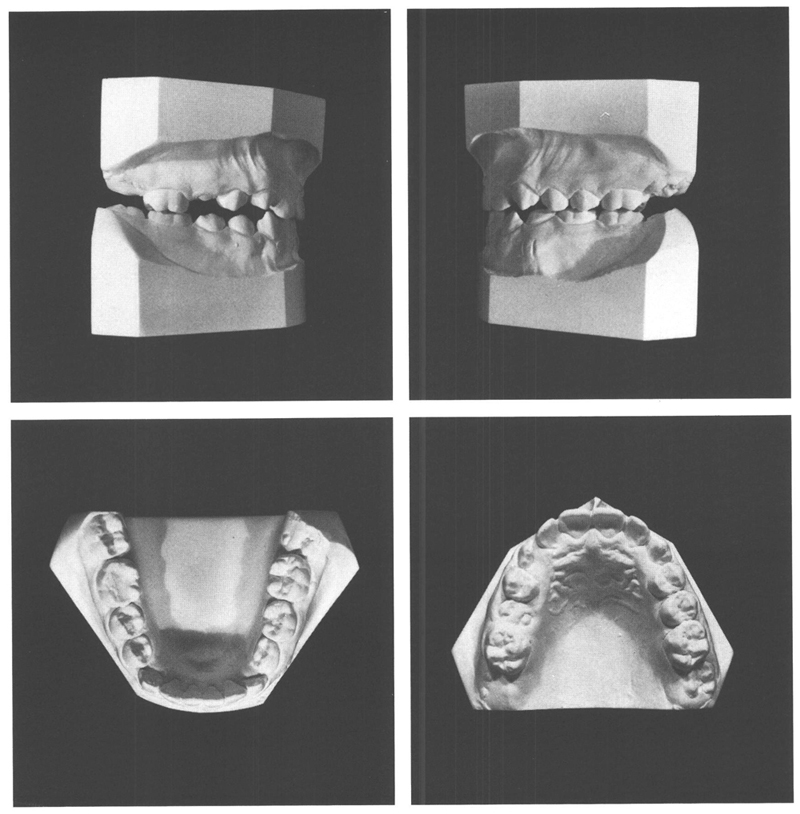 Figs 36-5 and 36-6 At the age of 9 y, 10 mo, there has been little change in the face and the anterior occlusion. The permanent canines have emerged as have the premolars, except for the mandibular left ones. During the intertransitional period, some crowding developed. The permanent canines in the mandible emerged rotated. The midline of the mandibular dental arch deviated to the left in relationship to the maxillary arch. This midline discrepancy was present prior to treatment and will not grow less in the course of further development of the dentition. 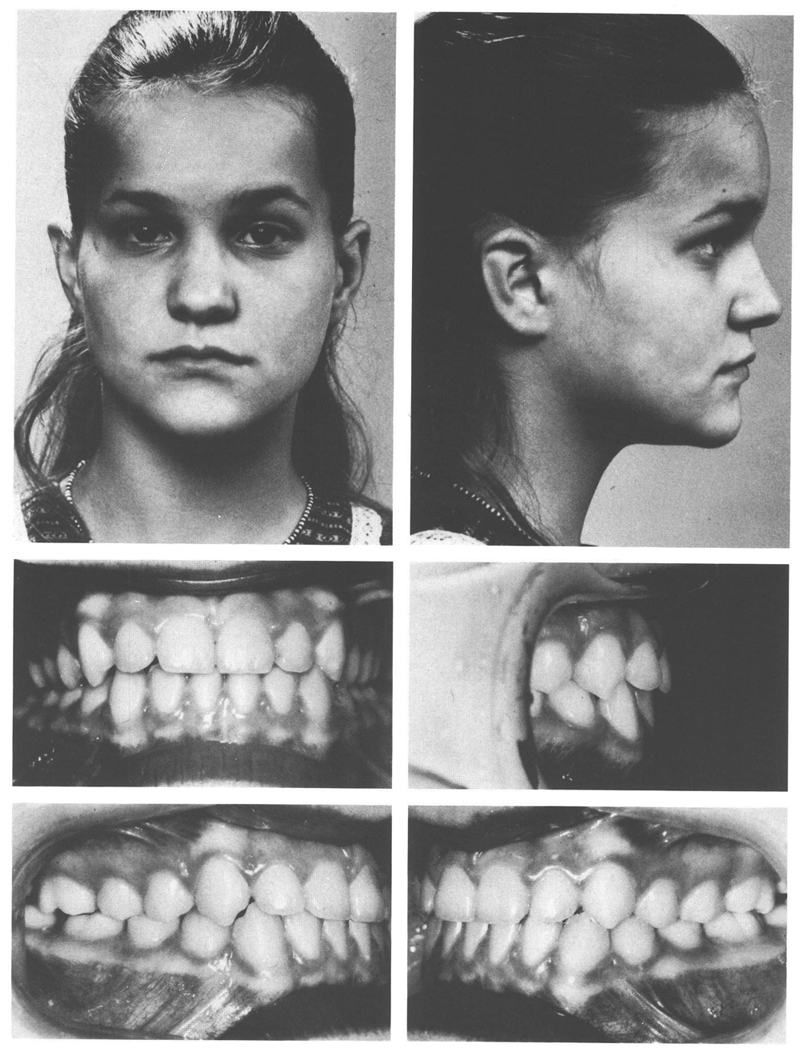 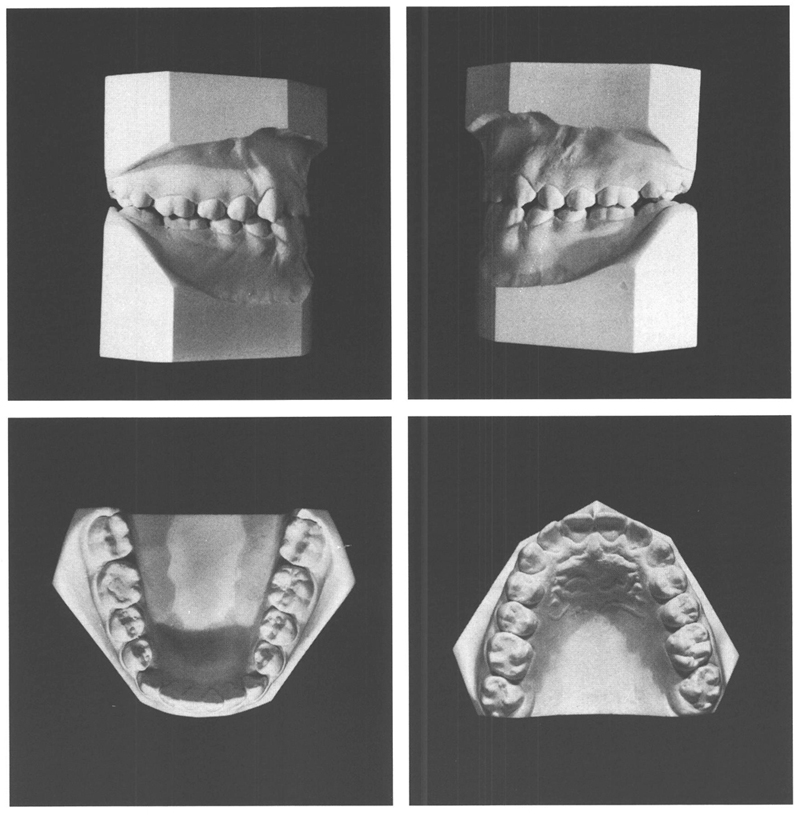 Figs 36-7 and 36-8 At the age of 10 y, 10 mo the second transitional period is complete and the second permanent molars have emerged well and are nearly in occlusion. In the maxillary arch, the teeth are correctly aligned and have normal contacts. In the mandible, there is mild crowding in the region of the canines which, with the premolars, are slightly rotated. Neutro-occlusion is seen on the right, a mild disto-occlusion on the left.

In the subsequent five years the facial growth was still significant, particularly with reference to the mandible, while the maxilla grew ventrally only slightly. The dento-alveolar compensatory mechanism led to a change in the inclination of the incisors and tipped the mandibular incisors a little backwards, this leading/>