A boy aged 13 years, 1 month exhibited a class II/1 anomaly and facial asymmetry with a more ventral development of the mid-face on the right than on the left side. He was able to breathe through his nose easily and still sucked his thumb regularly. His tongue was large and at rest lay between the occlusal surfaces of the posterior teeth, also covering the mandibular incisors. When swallowing, and during speech, the tongue was held between the dental arches both anteriorly and posteriorly. There was an open bite overall and the dental arches only came into contact fortuitously. Consequently, the maxillary and mandibular dental arches did not match, with the result that the too narrow maxillary arch did not meet the mandibular arch properly. Upon closure into central relationship, the midlines of the dental arches coincided but the only contact was between the buccal cusps of the first permanent molars. When asked to close the teeth together, occlusion was achieved through swinging the mandible to the right until the canines on that side came into contact. As a consequence, the midline of the mandibular dental arch was then displaced 3 mm to the right (Figs 29.1 and 29.2). 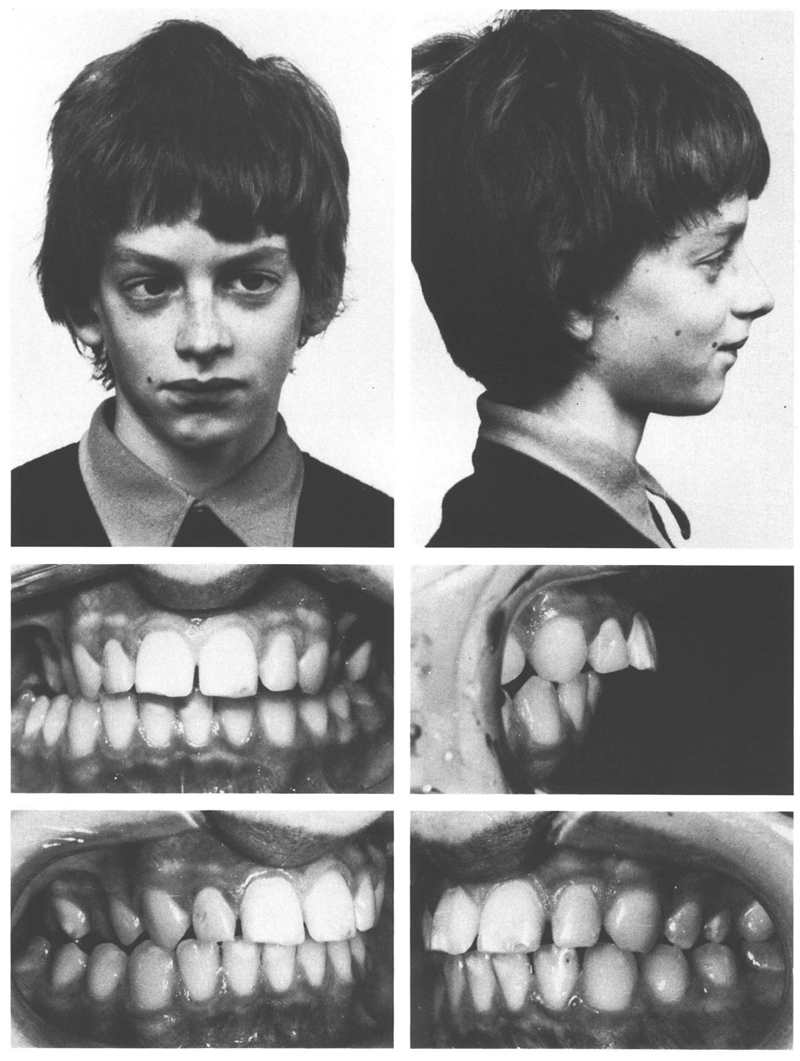 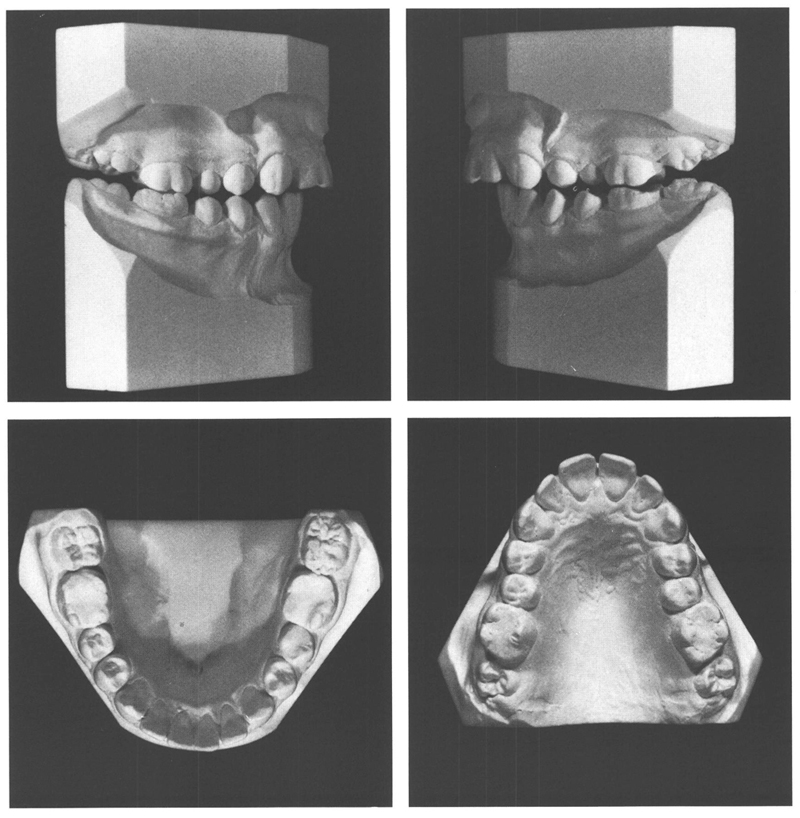 Figs 29-1 and 29-2 A boy aged 13 y, l.mo presented with facial asymmetry, a class II/1 anomaly (¾ PW disto), clear nasal airway and adequate lip closure. The intraoral photographs were taken after asking him to close his teeth together, which resulted in one contact on both sides between the first molars and on the right between the canines. In this process, the mandibular arch midline came to be 3 mm further to the right than when in central relation. Because the tongue lay between the teeth at rest and when swallowing, there had been no mutual adaptation between the maxillary and mandibular dental arches. The dental casts have been photographed in central relation; in so doing, they make contact artificially in just a few places. The mandibular dental arch displays hardly any abnormality. The maxillary arch is too narrow and shows labioversion of the incisors. The overjet is 8 mm while the maxillary and mandibular incisors barely overlap vertically.

To secure a significant broadening of the maxilla in a short time, rapid maxillary expansion was chosen. Subsequently, the disto-occlusion would be corrected with a cervical headgear. Because the oral hygiene left something to be desired originally, and several cavities still needed restoration, it was not until the age of 13 years, 9 months that the expansion appliance was cemented in place. The thumb-sucking had in the meantime been abandoned. After four weeks, the expansion screw had almost reached its limit without achieving the increase in width required. Therefore the acrylic of the plate on one side was cut through in the mouth, the screw turned back, and the two halves of the plate re-united with rapid-curing self-polymerizing resin so that the expansion could be continued (Fig 29.11). By the age of 13 years, 11 months, the necessary width had been reached and a cervical headgear was fitted. Three months later, the expansion plate was removed. It was assumed that by then the reorganization of the bone in the region of the midpalatal suture had been completed and that if a plate was used with divided labial arches to retract the maxillary incisors, it would also provide adequate retention to maintain the expansion. The first permanent molars were rebanded with the object of continuing to wear the cervical headgear. Eight months later, a new plate was provided, embodying a “tongue barrier” on each side with the intention to alter the position of the tongue.

The internal volume of the oral cavity had been increased by the suture expansion, so that it should be possible for the tongue now to be accommodated within the dental arches; however, this did not occur, even after the ends of the tongue barriers that extended down to the lingual side of the mandibular alveolar process were made sharp. After six months the tongue barriers which appeared to have had no effect at all, were removed and the plate continued to be worn, with the headgear, only for retention purposes. At the same time, speech lessons were begun, resulting in a notable improvement in tongue behavior during speech.

At the age of 16 years, 2 months orthodontic treatment was terminated. The disto-relation had been partly eliminated, the maxillary dental arch corresponded with the mandibular one in width, but an adequate occlusion had not been attained (Figs. 29.3 and 29.4). 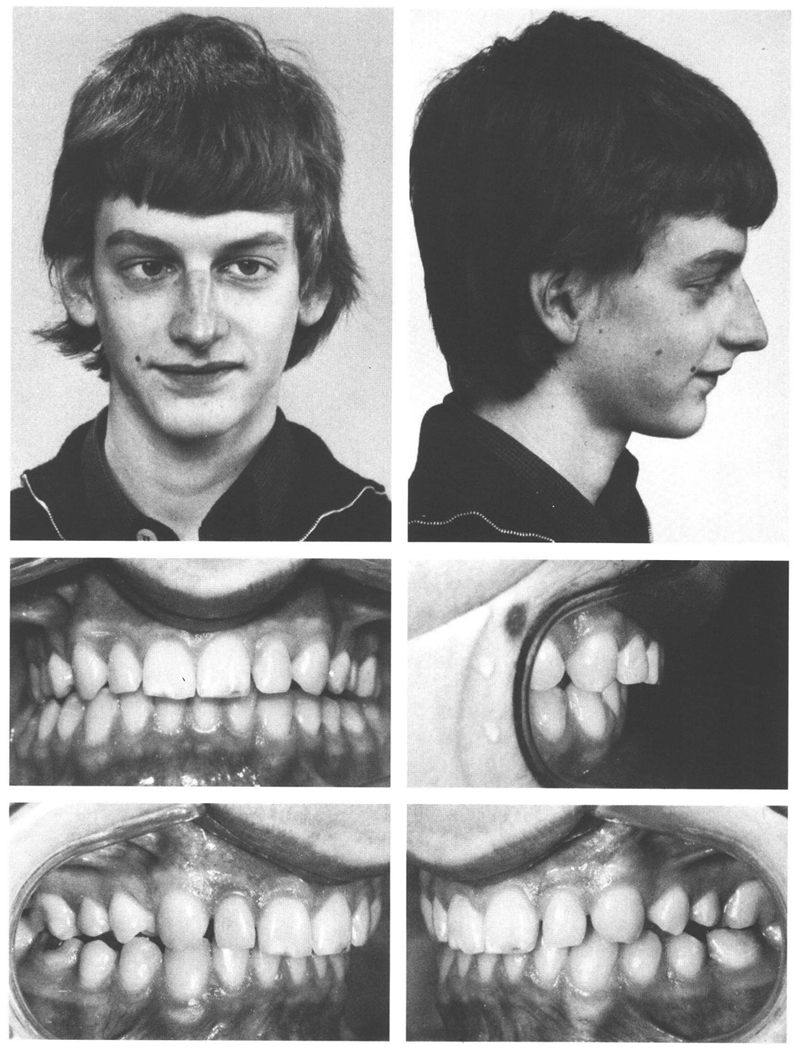