A girl aged 10 years, 0 mohths displayed a class II/1 anomaly with a relatively retruded mandible. She held her mouth open, and at rest her lower lip lay behind the maxillary incisors, which were overerupted. She could breathe easily through her nose. A disto-occlusion of 1 PW was associated with an overjet of 9 mm and an overbite of 6 mm. The mandibular incisors contacted the palate, and when asked to close her teeth together and close her mouth, stomion was found to be slightly above the middle of the maxillary central incisor crowns. The upper lip was short and when smiling about 2 mm of the gum was visible. In the maxillary dental arch, in which the first permanent molars were rotated mesiopalatally, sufficient room was available for all teeth. There was a TSD of 2 mm in the anteriors with relatively broad mandibular incisors that were crowded (Figs 24.1 and 24.2). 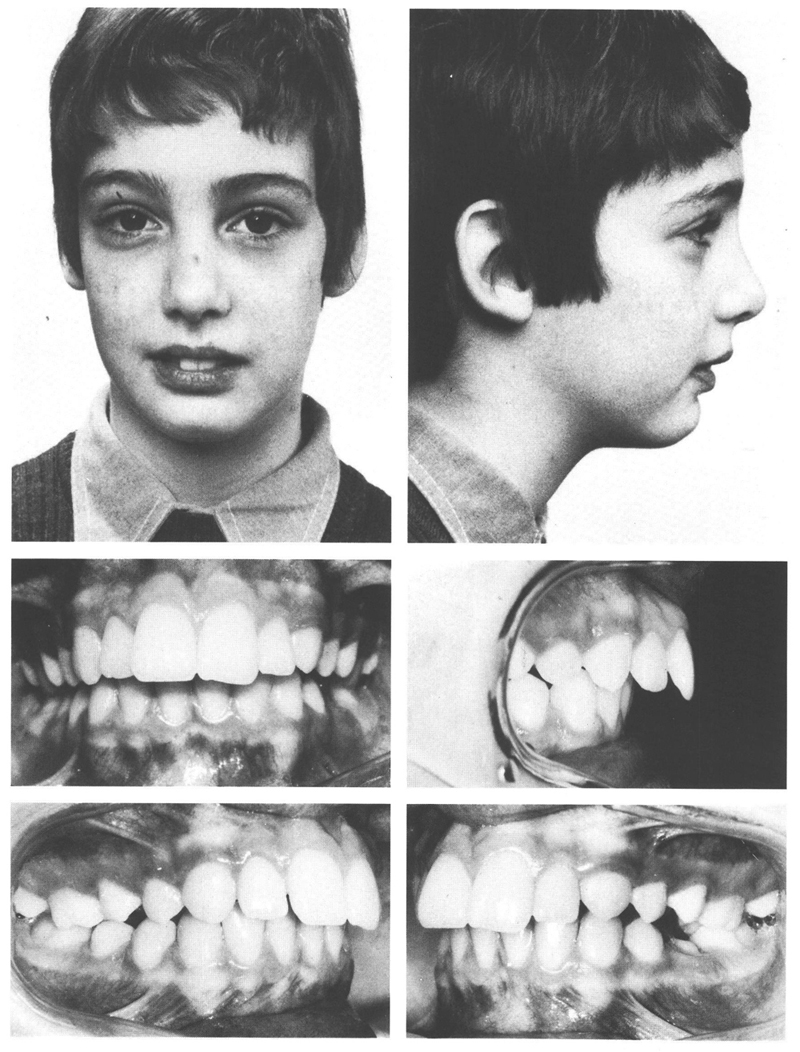 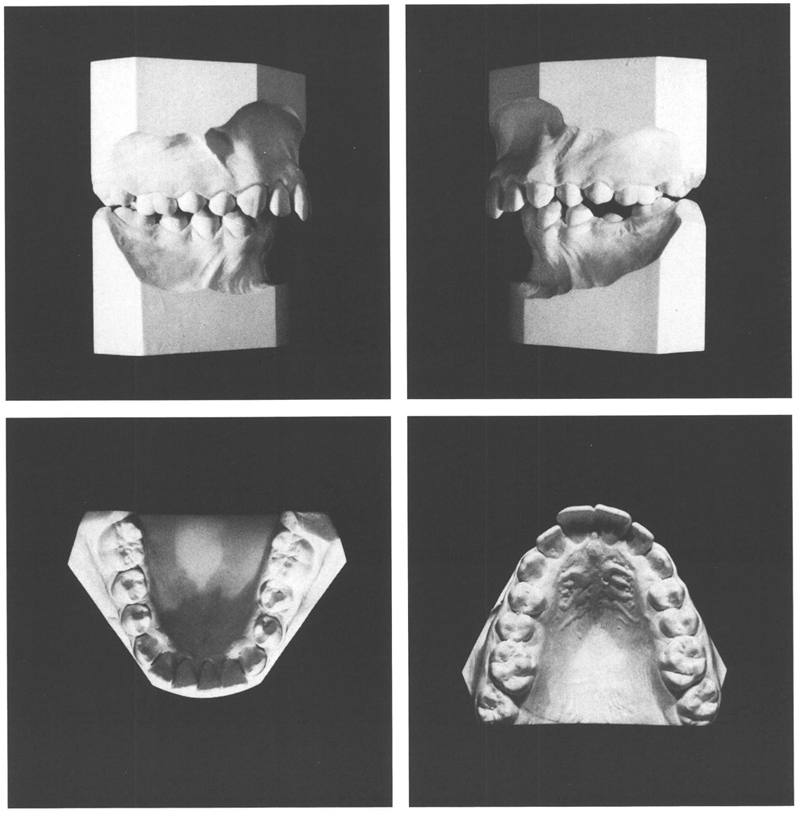 Figs 24-1 and 24-2 A girl aged 10 y, 0 mo with a class II/1 anomaly, the lower lip behind the prominent and overerupted maxillary incisors, a clear nasal passage, and a 2 mm high gum-line when smiling. The premolars and permanent canines, as well as the maxillary second permanent molars, have already emerged. The maxillary first permanent molars are rotated mesiopalatally. A disto-occlusion of 1 PW is combined with a solid interdigitation, except between the premolars, which have only recently emerged. The mandibular arch shows an ALD of –2mm, while a TSD is present with a 2 mm relative excess of tooth material in the mandibular anteriors.

It was decided to commence treatment as soon as possible to correct the disto-relation and intrude the maxillary incisors, and to finish treatment with the use of brackets on the maxillary incisors. At the age of 10 years, 1 month, a Bass-plate was placed in association with a parietal headgear which fitted onto the front of the plate (Fig 24.3; see Fig 9.15). Disadvantages of this technique are that an anterior open bite is created, and the maxillary teeth that are held in the clasps are unable to move to buccal in response to the rail mechanism as the disto-occlusion is corrected. The latter may lead through the occlusion to undesired transverse movements of the antagonists (Figs 24.4 and 24.5). If the Bass-plate is then left out after enough intrusion has been attained, and the parietal headgear is replaced with a cervical one, then the forces of the tongue and cheeks combined with those of the occlusion are free to stimulate improvements in the positions of the teeth. The tendency of artificially displaced teeth to return to their original positions assists these improvements (Fig. 24.6). Moreover, a cervical headgear can be adapted to apply more force on one side than the other, as is required in asymmetry such as this (Figs 24.7 and 24.8). 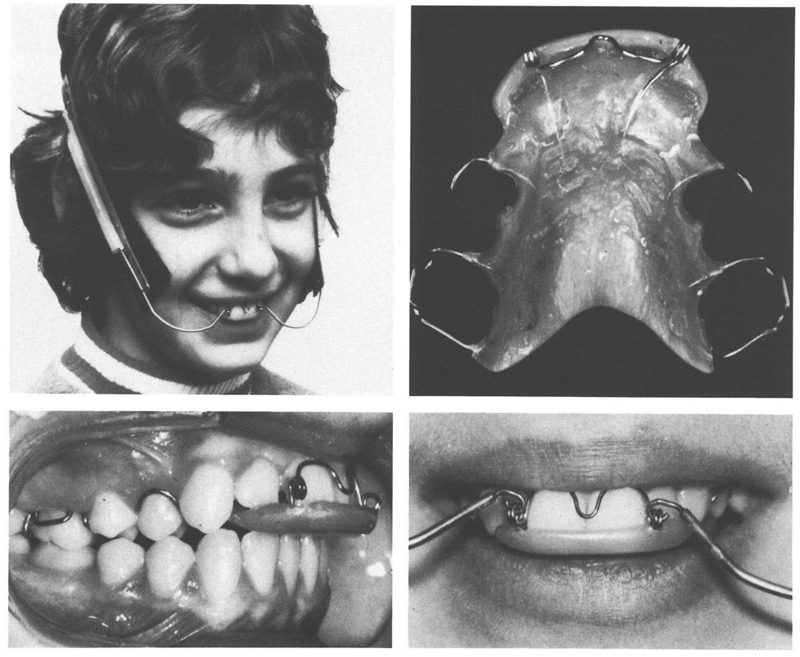 Fig 24-3 A Bass-plate with parietal headgear in use.

A The headgear is hooked onto the plate anteriorly, and due to the direction of the applied force, the maxilla is held back and the maxillary incisors are intruded.

B The plate is firmly retained by clasps on the posterior teeth and by the torquing springs on the incisors.

C The acrylic that caps the maxillary incisors should be sufficiently thick to ensure that the wire elements onto which the headgear is hooked will not be dislodged. A disadvantage of this construction is that the biteplane is rather high and an anterior open bite is promoted.

D The hooks from the headgear are fitted into the coils of the incisor torquing springs, which should be slightly active to prevent the incisors being tipped backwards. The plate has to be worn at all times, and the headgear at least 14 hours per day. 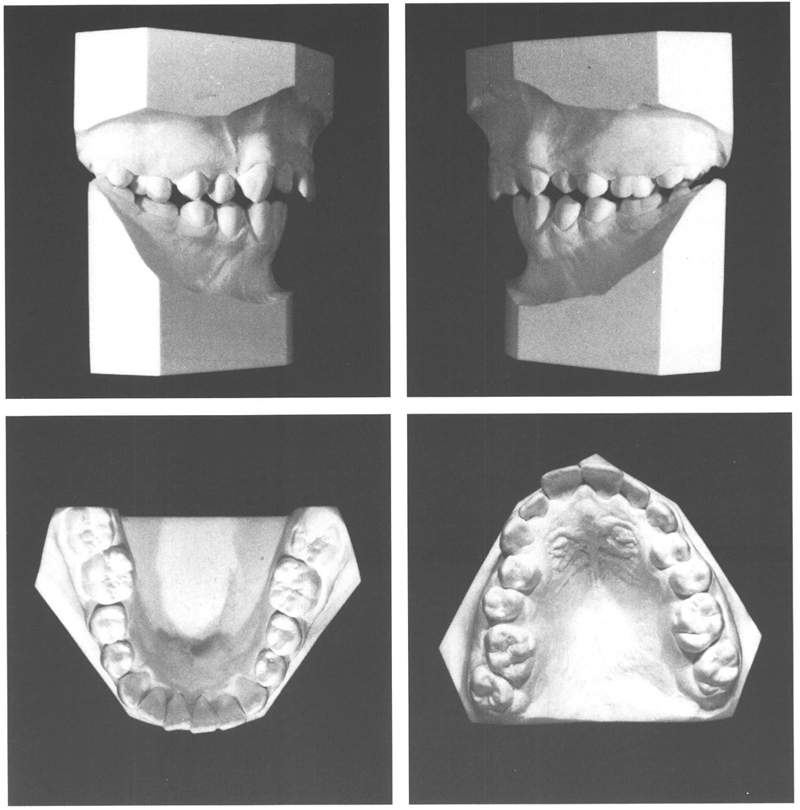 Fig 24-4 At the age of 10 y, 6 mo, after five months treatment with a Bass-plate and parietal headgear, the disto-occlusion has improved little on the left side. The curve of Spee in the mandibular dental arch has been leveled partially by the Bass-plate being worn continuously. The open bite has been produced mainly by intrusion of the maxillary incisors. The clasps on the first premolars and first molars impede any movement to buccal that these teeth normally would have undergone as the response to the rail mechanism. Instead, their antagonists have moved to lingual. To limit this effect, the clasps on the first permanent />