A girl aged 13 years, 2 months attended with an increased lower-third facial height combined with a class II/1 anomaly and an anterior open bite. She had recently stopped sucking her thumb and although she kept her mouth open she could breathe freely through her nose. Her upper lip was short and passive; the slightly everted lower lip lay against the incisal edges of the maxillary incisors. The tip of her tongue rested on the mandibular incisors; those teeth also were everted and had spaces between them. There was a disto-occlusion on the right of ¾ PW, a little more on the left. An overjet of 8 mm and an overbite of 0 mm existed. A surplus of space was available in the dental arches (ALD of +3 mm in both) (Figs 25.1 and 25.2). 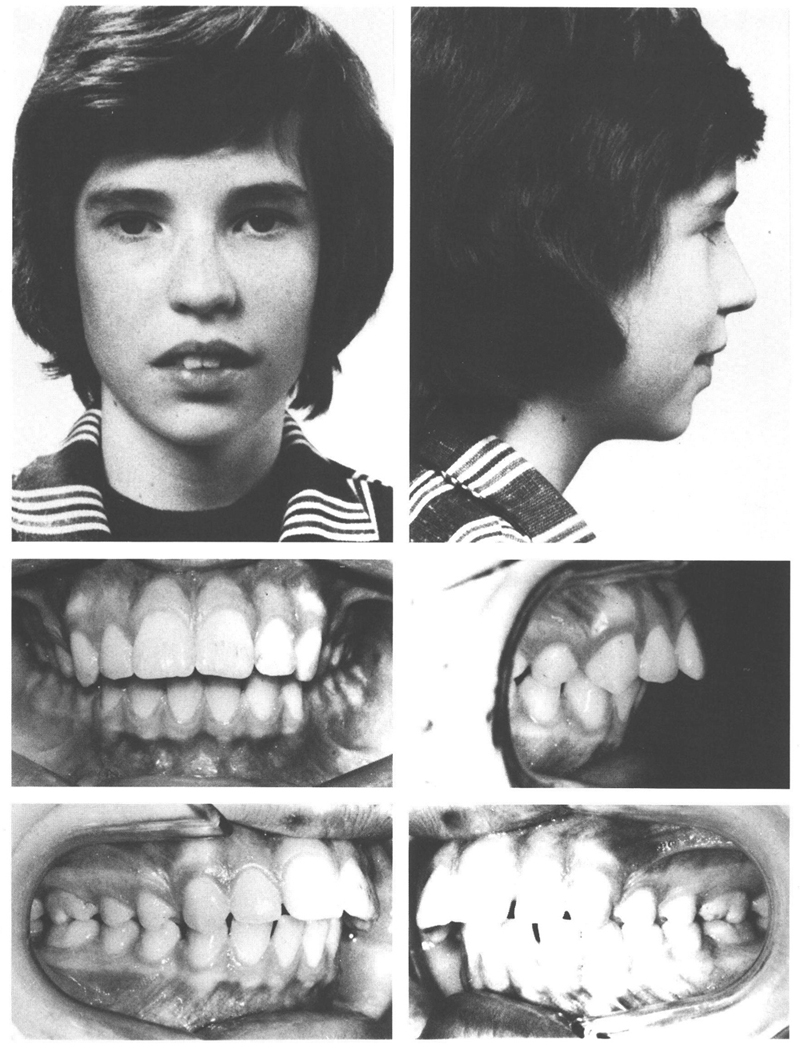 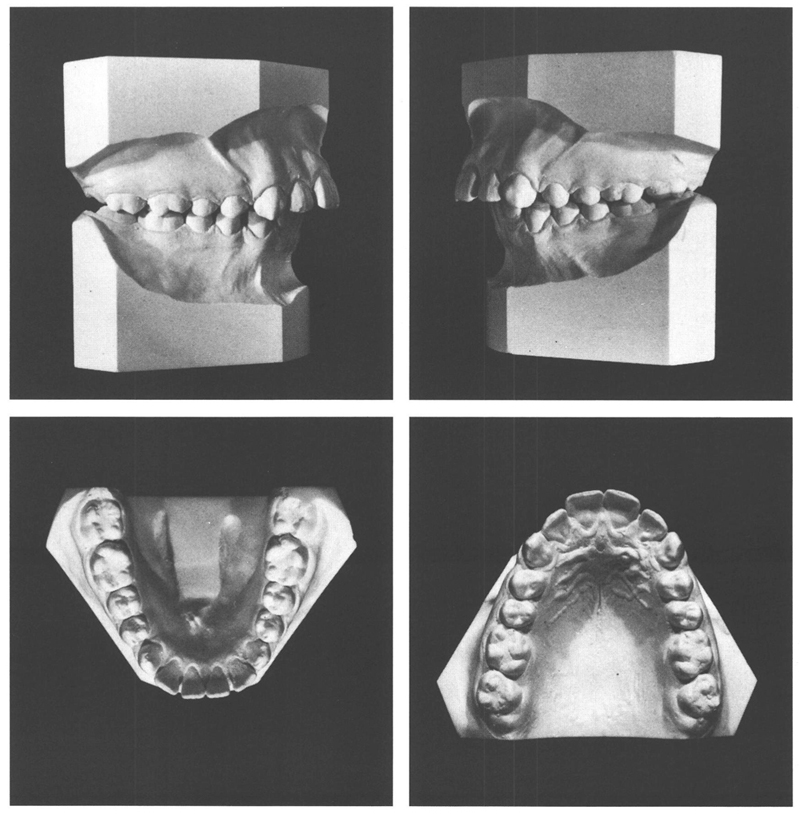 Figs 25-1 and 25-2 A girl of 13 y, 2 mo with a class II/1 anomaly, a disto-occlusion of ¾ PW on the right and almost 1 PW on the left, an anterior open bite (she had sucked her thumb until recently) and a relatively receding mandible. Both dental arches are well-formed, exhibiting a solid interdigitation of the posterior teeth and eversion of the incisors with slight anterior diastemata. The incisors in both jaws do not overlap vertically; their incisal edges are at the same heights.

In view of the large lower face height and the anterior open bite, it was decided to apply a parietal headgear. Because the patient wished to avoid prolonged treatment and because all the permanent teeth had emerged except the third molars, and also because it was not expected that she would grow much more, it was proposed that the headgear should be worn at all times except during meals. At the beginning of treatment, a partial fixed appliance would be fitted to the maxillary arch to counter the possibility that the continuous wearing of the headgear would cause too much space to be created in that arch, and would tip the first permanent molars too far distally.

Two weeks after the first consultation, the maxillary first permanent molars were banded and a parietal headgear was fitted. Six weeks later, brackets were placed on the maxillary incisors and a .0175” twistflex arch tied into them. That archwire was replaced with a .019” × .026” archwire at the next visit. After eight months, treatment was concluded. The disto-occlusion had been over-corrected and the height of the lower face had increased little. In the central relationship, the incisal edges of the maxillary and mandibular incisors were in contact, the mandibular ones slightly ventral to the maxillary ones. Because of the action of the parietal headgear, the maxillary first permanent molars were in infra-position and infra-occlusion (Figs 25.3 and 25.4). 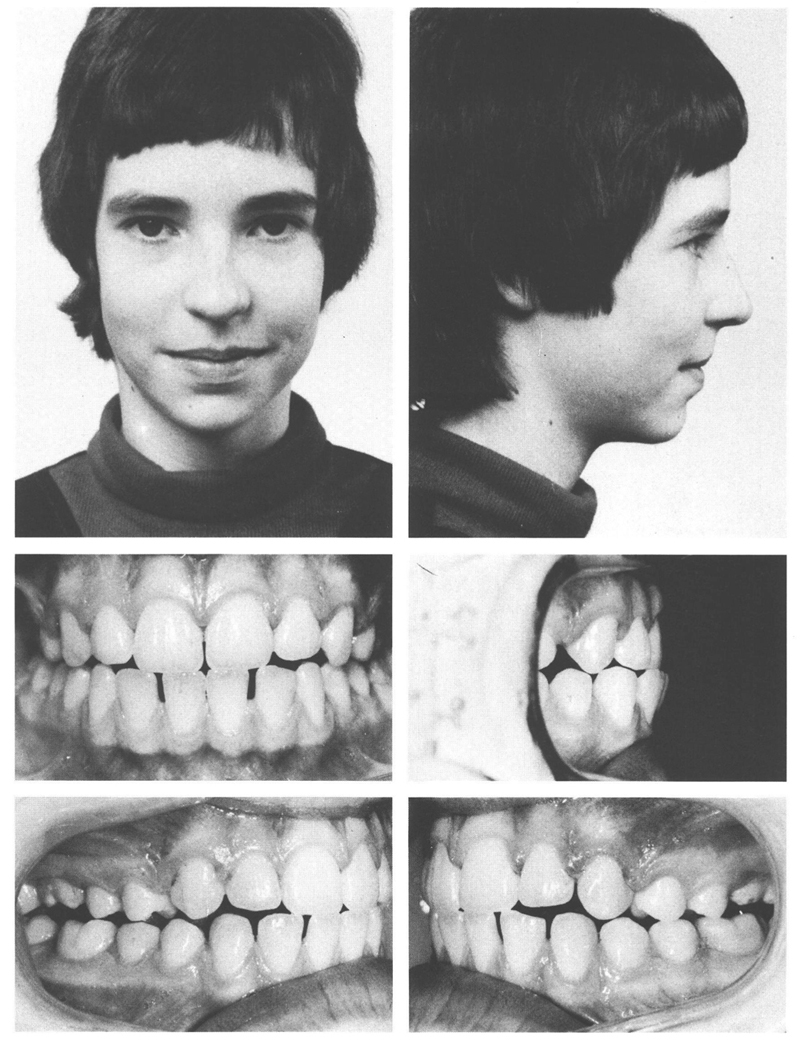 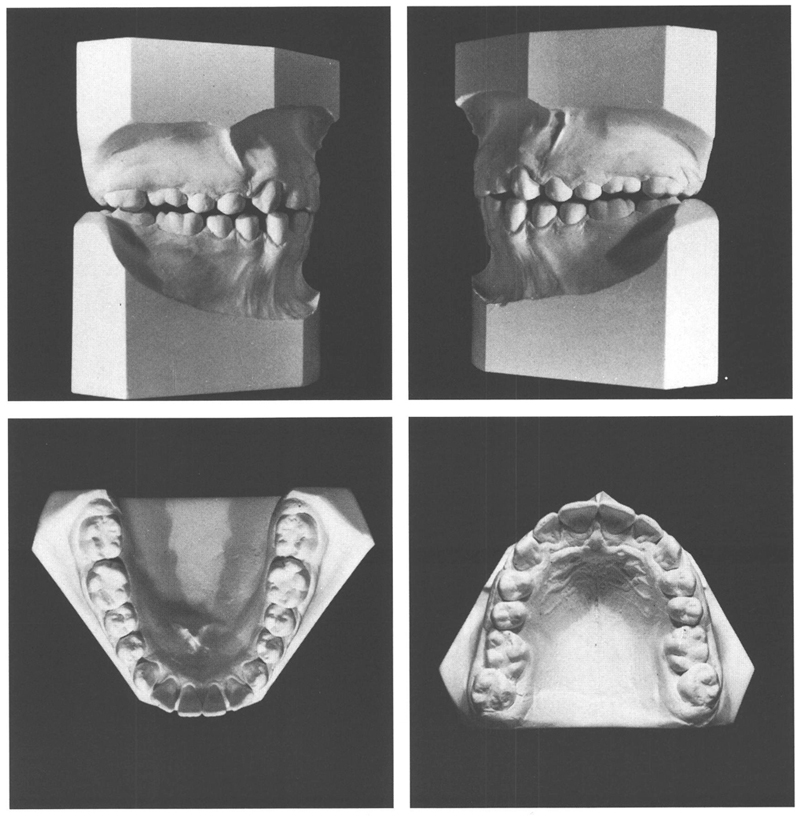 Figs 25-3 and 25-4 At the age of 13 y, 10 mo, after eight months of treatment the disto-occlusion had been overcorrected. The incisal edges of the incisors are located directly opposite each other in central relation (in the intraoral photograph taken from the side the patient is holding her jaw too far to ventral). The maxillary first permanent molars are in infra-position and infra-occlusion and are too far palatally. The dental arches show no abnormalities except for the diastemata between the mandibular incisors. Because of the overcorrection of the disto-occlusion, the arches do not fit together well. In addition, the maxillary incisors are a little too steeply inclined.