The aims of this chapter are to outline the principles of a quality assurance programme and to provide the practitioner with the knowledge to overcome many of the problems encountered when producing a DPR.

At the end of this chapter, the reader should have a raised awareness of the steps required for a dedicated quality assurance programme in order to produce high-quality diagnostic images for the minimum patient radiation dose. Using this systematic approach to image production, the reader should have become familiar with the range of problems that can adversely affect panoramic image quality and have the necessary knowledge of how to rectify them.

A high-quality DPR is produced by careful attention to the correct positioning of the patient, followed by optimum processing of the radiograph. Unfortunately, the many variables in the panoramic technique itself often conspire to lead to the production of a less than adequate final product. This can compromise or prevent diagnosis and, in the more extreme cases, negate the purpose for which the film was taken. The level of unacceptable films varies from 18.2% to 33%, with low density/low contrast films and incorrect positioning of the patient being the most common problems (Fig 6-1). 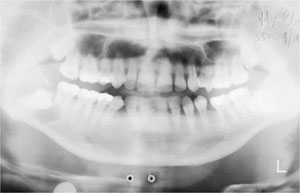 Fig 6-1 DPR with low density. The film illustrates the difficulty in diagnosis when relying on less than optimal image quality. There is a unilocular radiolucency in the right angle of the mandible overlying an unerupted third molar: a dentigerous cyst.

How to Overcome Problems of Poor-Quality Images

The necessity to produce a high-quality radiographic image requires a concerted effort by staff, along with the development of a dedicated Quality Assurance (QA) programme. Such a programme will ensure the production of a high quality diagnostic image with the minimum radiation dose to the patient and with limited cost to the health care provider. To achieve these ideals, a quality control programme is developed to selectively test the major components of the radiographic system on a regular basis, thereby ensuring optimum performance. The major components of any radiographic system are:

The routine testing of each of these components is combined with monitoring and regular auditing of the quality of the final image. There are two methods to monitor film quality:

Most dentists continuously monitor radiographic quality during patient management. This simple method of evaluation can be improved by comparing each film to a reference or ‘ideal’ film. This day-to-day surveillance rapidly alerts the clinician to major departures from ideal film quality.

Some film faults are, however, more subtle, resulting in a gradual deterioration in film quality that often goes unnoticed or is unrecognised. A criterion-based clinical audit allows the practitioner to effectively identify areas of poor practice by systematically assessing each stage of image production. The audit is effective in highlighting areas of poor practice, allowing the practitioner to rapidly instigate change to improve film quality. These may include the need for equipment maintenance, an improvement in radiographic technique or the need for improved staff training. The criterion-based audit requires a standard (Table 6-1) against which the adequacy of the film can be judged. Simply looking at ‘current practice’ and the identification of what is wrong without measuring it against ‘best practice’ will obviously achieve very little. In the United Kingdom, the need to implement a suitable QA programme for dental radiography is a legal requirement. The QA programme to ensure optimum image quality should include:

A well-designed QA programme must be inexpensive to operate, both from a monetary standpoint and with regard to the staff time involved. It should be the responsibility of a named person. The QA programme should detail the frequency with which surveys and checks of the radiographic system are to be undertaken, and this information must be kept in a written log.

Using the criteria given in Table 6-1, the practitioner can then implement a ‘reject film analysis’, which is in essence a subjective evaluation of film quality. Poor-quality films tend to fall into several distinct categories according to the errors present:

With the exception of poor positioning, which is discussed later, each fault type, its cause(s) and the methods used for correction are detailed in Tables 6-2, 6-3, 6-4 and 6-5.

How can we Improve Panoramic Film Quality?

It is extremely important that dentists understand how their DPRs are produced so that they can ‘trouble-shoot’ the system. Often, film faults are unique to the individual dentist or practice and tend to recur regularly, the inference being that they are not recognised.

The aim of the next section is to alert the practitioner to the problems associated with creating a DPR. This takes you step by step through each stage of image production. This process commences by loading the cassette in the darkroom, preparing the patient, imaging the patient, processing the film, and finally viewing the film.

At each stage, attention will be drawn to possible problems and the method of correction. In addition, the necessary quality control tests and procedures needed to ensure continuing optimum performance will be detailed along with the frequency of their implementation.

This section relates to those practitioners who are using cassettes with screen/film combinations followed by processing in a darkroom or desktop processor.

The energy carried by the emerging x-ray beam interacts with the inorganic salts (phosphors) in the screens, causing them to fluoresce. The light emitted has, as near as possible, the same energy information as recorded by the original x-ray beam. This light exposes the photosensitive film emulsion sandwiched between the contiguous screens.

As screen film is obviously extremely sensitive to light, routine checks should be made to ensure that the darkroom is light-tight and the safe lights are ‘safe’. Desktop units should be similarly checked for light tightness.

The dedicated dark r/>
Only gold members can continue reading. Log In or Register to continue