The aim of the chapter is to present an overview of the development of dental panoramic radiography during the past century.

After studying this chapter, the reader should have a clear understanding of the historical development of panoramic radiography and of the more recent technological advances in panoramic image production, including digital imaging techniques.

Today panoramic radiographic equipment is found routinely both within most hospital radiology departments and in a high proportion of general dental practices. It has been estimated that around 60% of United Kingdom dentists have direct access to panoramic equipment. A similar level of use has been reported in other parts of the industrialised world.

Development of the Technique

In the early part of the 20th century, many researchers were developing techniques using movement of the x-ray tube and the film in order to visualise structures or foreign bodies (particularly bullets) situated within the patient. Andre Bocage, a French researcher, was the originator of the principles of body-section imaging. In Bocage’s seminal work, patented in 1922, the author mentions the possibility of imaging curved surfaces such as the jaws.

Further interest in this field of research did not resurface for another 20 years and resulted in the development of x-ray equipment using two quite different radiographic techniques to produce an overall image of the jaws. One group of researchers developed a small x-ray source which, when positioned intraorally, would directly expose an x-ray film moulded to the outside of the patient’s face. The other group relied upon the production of a tomographic image of the jaws with the tube positioned extraorally, combined with either an intraorally or an extraorally positioned film.

Bouchacourt first proposed the possibility of using an intraoral source of radiation to image the jaws as early as 1898. This concept was finally developed almost half a century later when two separate groups of researchers applied for patents to develop intraoral panoramic equipment. These were, in 1943, the German company of Koch and Sterzel (Fig 1-1), followed in 1951 by the Swiss researcher Dr. Walter Ott. Dr. Sydney Blackman, a British radiologist, modified the principles proposed by Dr. Ott, leading to the commercial development by Watson and Sons Ltd. of the ‘Panograph’ panoramic equipment (Fig 1-2). 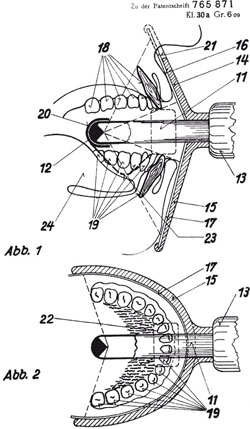 Fig 1-1 Patent issued to the Koch and Sterzel Aktiengesellschaft of Düsseldorf, Germany, for x-ray equipment capable of imaging body cavities. Horst Bergen is named as the inventor of the equipment. 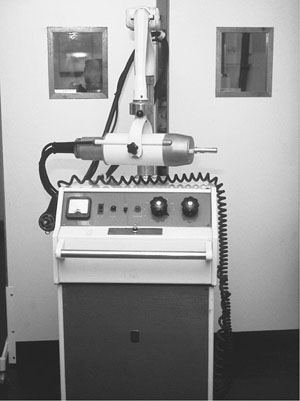 Intraoral panoramic equipment used a cone-shaped anode located at the end of a thin rod (Fig 1-2) with a focal spot (the source of the x-ray beam) that was extremely small (ca. 0.1 mm) compared to conventional x-ray equipment. The intraoral technique had several inherent problems. It was extremely time-consuming, requiring separate exposures for both the maxilla and mandible (Fig 1-3). The technique also resulted in severe geometric distortion and, more importantly, delivered high doses of radiation to the oral tissues, notably the tongue. Paradoxically, these factors appeared not to have deterred the development of an intraoral panoramic unit that relied upon a radioactive isotope as its source of radiation. Fortunately, common sense prevailed and further experimentation with this type of intraoral panoramic equipment was rapidly curtailed, not least because of the obvious radiation risk but also the cost of the isotope. 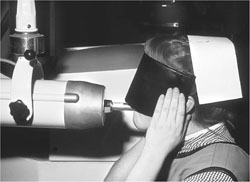 Further development of the intraoral type of panoramic equipment centred upon improving patient comfort and reducing image distortion. An eccentric positioning of the x-ray tube was an attempt to improve the latter; however, the problems of geometric distortion proved insurmountable. Finally, the unacceptable dose level delivered by this type of equipment led to legislation within the United Kingdom recommending its withdrawal from clinical practice.

The records of the American Patent Office show that in 1922, a patent was issued to A.F. Zulauf for ‘Panoramic X-ray Apparatus’ (Fig 1-4). The equipment used a rotational narrow beam x-ray technique that scanned either the upper or lower jaw with an intraorally positioned waterproofed lead-backed film packet to receive the image. The x-ray generator was moved manually around the patient on a mobile carriage supported on a U-shaped table using a preformed track. The researcher clearly understood the principles of image production but also its limitations. Zulauf stressed that the exact speed of movement was ‘determined by experience and depends on the strength of the x-rays, the width of the collimator and its distance from the teeth being shadow-graphed’. While this patented design must qualify as the earliest example of rotational panoramic radiography, no further details concerning the subsequent development or the clinical use of the equipment have been found. 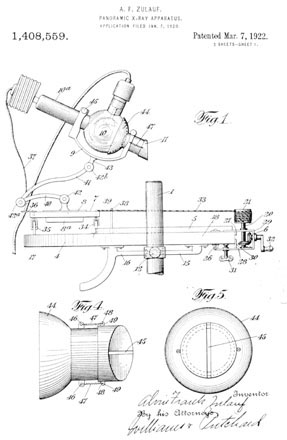 Fig 1-4 Patent of rotational x-ray equipment issued to A.F. Zulauf in 1922. Upper diagram is a side view elevation of the equipment. Figures 4 and 5 (on the patent document) are the top and front views, respectively, of the x-ray collimator.

During the early 1930s, several researchers were active in pursuing and developing methods of imaging ‘curved’ structures such as the jaws. Numata proposed and discussed the principles of the panoramic technique as early as 1933, while at the same time co/>