5: The Use of Panoramic Radiography in General Dental Practice

The Use of Panoramic Radiography in General Dental Practice

After studying this chapter, the reader should understand the limitations of the panoramic radiograph as well as its diagnostic accuracy. Those areas of clinical practice in which scientific evidence supports the use of panoramic radiography should also be recognised.

Although x-rays have become an accepted part of everyday clinical practice, each radiographic examination poses a potential risk to the patient. This is true for all medical exposures, even for those that deliver lower doses, as is typically the case in dental radiography.

Every x-ray examination should produce a net benefit for the patient by adding new information to help in their management. This principle of weighing the potential diagnostic benefits of a radiographic examination against the possible individual detriment is a well-established tenet of radiation protection.

The process of justifying an appropriate radiographic examination follows on from a careful history and a thorough clinical examination of the patient. The practice of ‘routine’ or ‘screening’ radiography cannot be sanctioned, as such examinations are carried out irrespective of the presence or absence of clinical signs and symptoms. Consideration must also be given to the prevalence of the disease, its rate of progression and, most importantly, the diagnostic efficacy of the radiographic technique chosen to image the suspected pathology.

The Development of Clinical Guidelines

The development of clinical guidelines has simplified the process of selecting radiographs for a particular clinical situation. Such guidelines are often referred to as ‘referral criteria’ or ‘selection criteria’ and have been developed for both medical and dental radiography. The development of guidelines involves a rigorous and robust evaluation of all the available scientific evidence and encompasses an extensive literature review using explicit methodologies.

Radiographic Referral Criteria have been defined as ‘descriptions of clinical conditions derived from patient signs, symptoms and history that identify patients who are likely to benefit from a particular radiographic technique’ (Dental Radiography Patient Selection Criteria Panel and Joseph LP, 1987). As with any guidelines, these are not intended to be rigid constraints on clinical practice, but a concept of good practice against which the needs of the individual patient can be considered.

The Limitations of the Panoramic Image

Every radiographic examination has its limitations and can never be seen as a totally accurate representation. Magnification and an unsharp image will undoubtedly affect radiographic accuracy, while the type of image receptor used has an impact upon the ability to see fine detail. Resolution is the term used to describe the ability of the image receptor to differentiate structures that lie close together. Resolution is objectively measured by radiographing test objects containing very fine metal wires of decreasing thickness and intervening distance. It can be expressed as the number of line pairs per millimetre (l.p. mm-1).

Dental intraoral film has an extremely high resolution of around 20 l.p. mm-1. Any radiographic technique, such as panoramic radiography, that relies upon intensifying screens to form the final image is inevitably associated with some loss of information when compared with conventional direct intraoral film (Fig 5-1). Most intensifying screen/film cassette combinations have a resolution of around 5 to 6 l.p. mm-1 (Fig 5-1). 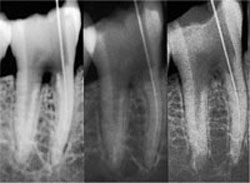 Other factors, such as the setting of incorrect exposure factors and poor processing, can further affect the resultant optical density and contrast of the final image (see Chapter 6).

In panoramic radiography, other factors that are directly attributable to the technique itself can further reduce resolution. These include:

DPRs have a complex pattern of magnification as a direct result of the mechanics of image production. To obtain an ideal DPR, the operator must ensure that the patient is correctly positioned in the centre of the image plane. The image plane is also often referred to as the focal trough.

Most modern types of equipment have devices, such as positioning lights, bite blocks, chin rests and lateral side guides, to ensure that the patient is correctly positioned. Within the focal trough, both horizontal and vertical magnification are equally matched. If the patient is inaccurately positioned, a discrepancy between the vertical and horizontal magnification of teeth and jaws occurs. These inaccuracies are usually most marked in the anterior region of the jaws (see Chapter 6).

The ideal projection geometry of the panoramic x-ray beam is perpendicular to the dental arch throughout its rotational movement around the patient’s head. This ideal has proved difficult to achieve, in particular for the premolar/molar region, and results in a variable amount of overlap of tooth contact points. Newer equipment has incorporated innovative projectional geometry in an attempt to overcome the problem, but this has not significantly improved the detection of approximal caries in the premolar region (Fig 5-2). 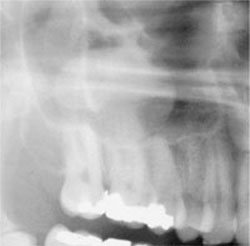 Fig 5-2 Part of a DPR displaying overlap of tooth contact points in the premolar region. Note the antral mucous retention cyst above the molar teeth.

Panoramic images are further degraded, to a variable degree, by shadows of soft tissues and surrounding air (Fig 5-3). Secondary images of the spine and mandible (Fig 5-4) further reduce diagnostic quality. These images can be reduced by careful positioning of the patient. 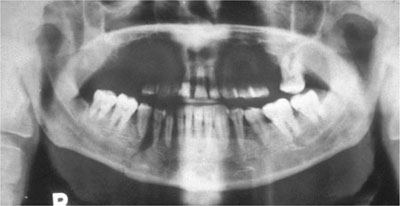 Fig 5-3 DPR displaying a pronounced air shadow above the tongue. Note also the mandibular fracture in the right premolar region. 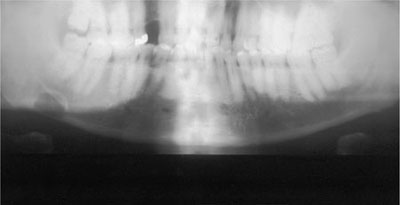 Fig 5-4 Patient is placed asymmetrically in the panoramic unit and there is also evidence of slumping rather than an upright position. This has resulted in severe secondary shadowing of the posterior parts of the mandible and the cervical spine. An incidental finding is a Stafne’s bone cavity evident just above the lower cortex at the right angle of the mandible.

Radiographs are an accepted part of clinical practice, but it is important to remember that every x-ray examination has a limit to its degree of accuracy in diagnosing pathology.

How do we Assess Radiographic Accuracy?

It is probably easier to relate these statistical indices to everyday clinical practice, such as caries identification. Therefore, sensitivity records the ‘true positive’ fraction of caries lesions in the oral cavity and expresses them as a percentage. Specificity is the proportion of healthy tooth surfaces that would be correctly identified by the diagnostic test, i.e., the ‘true negative’ fraction. Obviously, the perfect diagnostic system would have 100% sensitivity and 100% specificity. Sensitivities less than 100% indicate that there will be a proportion of undetected pathology (‘false negative’ diagnoses), i.e., the test identifies the tooth surface as having no caries involvement when, in fact, it has decay. Similarly, specificities less than 100% indicate that there would be a proportion of undetected healthy sites misdiagnosed as diseased (‘false positive’ diagnoses). It is only by understanding these terms that one can quantify the diagnostic validity of different imaging techniques.

The Diagnostic Value of Panoramic Radiography for Common Dental Pathosis

Sensitivity values for caries diagnosis using panoramic radiography are much lower than those recorded using bitewing radiographs (Fig 5-5). Panoramic radiographic sensitivity values for approximal caries vary considerably in different regions of the oral cavity. This variation ranges from 8% in the incisor region to 30% in the premolar region, with the highest sensitivity values (52%) occurring in the molar region. The overall sensitivity levels for approximal caries diagnosis using panoramic equipment varies between studies and ranges from 22% to 37%. In addition, the panoramic technique also produces a high level of false negative readings of 80% in the />

Tags: Panoramic Radiology
Jan 12, 2015 | Posted by mrzezo in Oral and Maxillofacial Radiology | Comments Off on 5: The Use of Panoramic Radiography in General Dental Practice
Premium Wordpress Themes by UFO Themes
WordPress theme by UFO themes