The aims of this chapter are to provide the practitioner with the principles of how radiation damage occurs, to describe the concepts of radiation dose and risk, to discuss the level of dose delivered and the physical methods of dose reduction achievable in panoramic radiography.

After studying this chapter, the reader should understand the biological effects of ionising radiation, the relevance and the method of computation of effective dose and risk and should also be conversant with the various methods to reduce dose to patients when using panoramic radiography.

Following Roentgen’s discovery of x-rays at the end of the 19th century, medical and dental practitioners were not slow to see the potential diagnostic benefits of an x-ray examination. They also became rapidly aware of the damaging effects of x-rays to both themselves and their patients.

The Biological Effects of Panoramic Radiography

During a radiographic examination, millions of x-ray photons pass through the region of the body under review. X-ray photons have the potential to cause damage by a process known as ionisation. In this process, one or more electrons are removed from atoms, and also the bonds between the atoms themselves are often disrupted. Although damage can occur anywhere within the cell itself, damage affecting the DNA in the chromosomes is the most critical. DNA does have the potential to repair itself, but this is dependent on the degree of damage sustained (Fig 4-1). If repair is impossible, the damaged portion of the DNA of the chromosome remains permanently altered as a mutation. The period between exposure to x-rays and the clinical diagnosis of a tumour is generally many years. 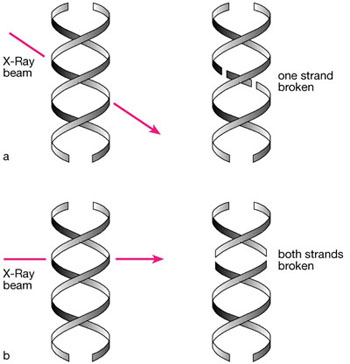 Fig 4-1 DNA damage caused by irradiation. a) Single strand breaks can be repaired using the complementary strand as a template. b) Other damage may be irreparable and have serious long-lasting effects.

A detailed knowledge of the dose received from any radiographic examination allows a scientific estimation of the possible risk of tumour induction for the patient. There is evidence to show that exposure to dental radiographic examinations can result in an increased risk of brain, salivary gland and thyroid tumours. These effects are random and have no threshold radiation dose below which they will not occur. These occurrences are referred to as ‘chance’ or stochastic effects, in which the magnitude of the risk is proportional to the radiation dose.

The dose delivered to the patient can be measured in several ways. One of the easiest ways is to place dosemeters on the patient’s skin to record entrance dose, and the resultant measurement is recorded in milligrays (mGy). A more meaningful measurement of dose is to carry out a calculation of effective dose. The calculation of effective dose requires detailed knowledge of individual doses to specific organs. Each of these specific organs has an individual weighting factor based on the contribution of that organ to the total overall risk of developing a fatal tumour/nonfatal tumour or promoting a severe hereditary effect in the progeny.

Effective dose expresses the multiplicity of doses affecting the variety of tissue types and organs encountered as the x-ray beam traverses the patient. These are then represented as a single value of ‘whole body’ detriment. The theoretical calculation relies upon either laboratory studies or computer modelling, and the derived figure can subsequently be used to estimate radiation risk. Effective dose is measured in units of energy absorption per unit mass (Joules/kg) called the Sievert. For dental exposures, in which doses are relatively low, the measurement is recorded in microsieverts (μSv) representing one millionth of a Sievert.

Using recently published research on panoramic radiography, the effective dose for panoramic radiography ranges from 3.85 μSv to 30 μSv. The corresponding risk of fatal cancer per million ranges from 0.21 to 1.9, respectively. The rates quoted for risk relate to an adult patient of 30 years of age. Risk is age-dependent, being highest for the young and lowest for the elderly. The modifying multiplication factors used to account for age in risk estimation are given in Table 4-1.