Class I, lateral forced bite, crossbite from 22 to 27 inclusive
Elastics “through the bite”
Female: 16 years, 4 months to 21 years, 0 months

A girl aged 16 years, 4 months presented with asymmetry of her features, and mandibular joint troubles that became evident when her teeth were held together for a long period. She was fearful that her complaints would increase in severity. As she had the ambition to follow a career as a singer, she put much value on her outward appearance. On her left side she exhibited a crossbite of all her teeth except the central incisors. At the same time there was a lateral forced bite of 3 mm to the left. In habitual occlusion all the teeth were in contact. There were no indications of an open bite. Insofar as the circumstances indicated it, it appeared that on the basis of the cone-funnel mechanism maximal vertical contact existed.30 The centric relation was located 1 mm dorsal to the habitual occlusion (Figs 4.1 and 4.2). 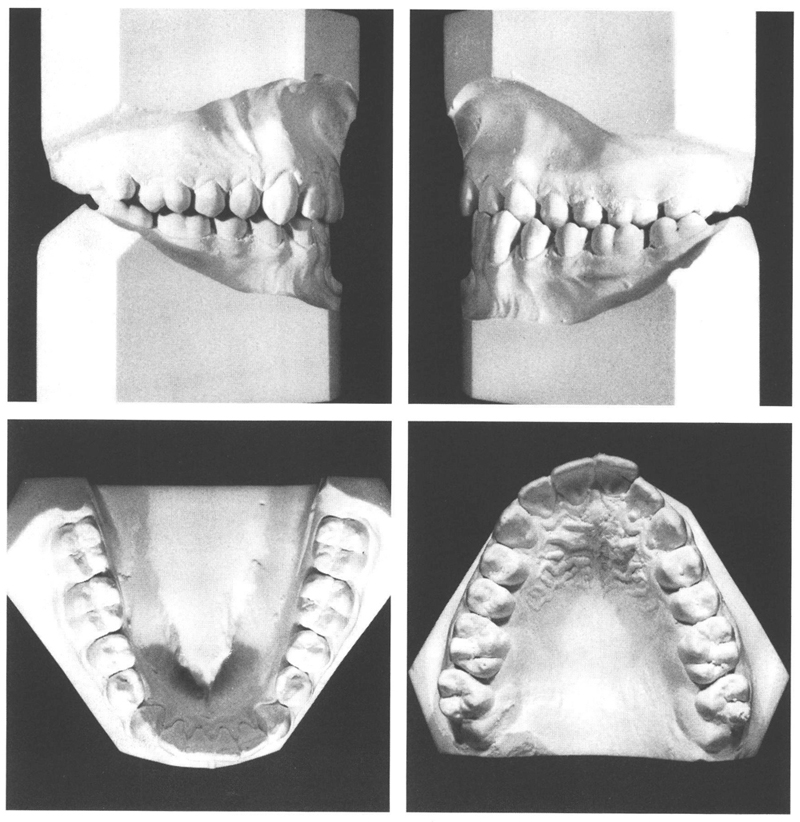 Figs 4-1 and 4-2 Girl, 16 y, 4 mo old, with a crossbite on the left from the lateral incisor to the second molar inclusive, a lateral forced bite of 3 mm to the left and a maximum retrusion of 2 mm beyond habitual occlusion was possible. The premolars and molars interdigitate fully in neutro-occlusion, although on the left it is in crossbite. The premolars and molars on the left when compared with those on the other side are tipped buccally in the mandible and palatally in the maxilla.

The lateral forced bite and deviant transverse occlusion that she presented are illustrated diagramatically in Figure 4.8. In such a situation, the premolars and the molars on both right and left sides have abnormal inclinations. In a unilateral crossbite without a forced occlusion, it is only the teeth on the side of the crossbite that are abnormally inclined (Fig 4.9).

The reversed transverse occlusion in this case has led to an abnormal inclination of the premolars and molars, not only on the side of the crossbite but also — even though to a limited extent — on the contralateral side. Such adaptations in inclination follow the concept of the dento-alveolar compensatory mechanism (Fig 4.10).

By providing reciprocal forces between the teeth of the maxillary and mandibular arches on the left side, using elastics “through the bite,” the tooth movement required to correct the crossbite was obtained. Both their positions and their inclinations were mutually adjusted (Fig 4.11). At the same time, the lateral forced bite was eliminated. It was assumed that the transverse occlusion on the right would be left intact and that the required minor changes in position and inclination would follow spontaneously.

The patient had worn the elastics continuously apart from the time spent brushing her teeth. After four weeks, the lateral incisors and premolars had moved sufficiently and elastics now had only to be worn on the molars and canines. After another three weeks those teeth had also been corrected and the brackets and buttons could be removed. The mandibular joint troubles had vanished. Six months later, the interdigitation had become optimal under the influence of the occlusion and the inclination of the teeth had adapted. The depth of the bite had reduced on both sides (Figs 4.3 and 4.4). A retainer was considered unnecessary in this case on the principle that the occlusion and the normal functional conditions guaranteed stability. This assessment was only partly supported by the records taken five years later. The maxillary left first premolar had moved palatally, something that might be attributed to a slight local interposition of the tongue. This occurrence brought into question the original observations from which the diagnosis was made in which a solid interdigitation was assumed (Figs. 4.5 an/>