A woman aged 43 years, 3 months had enjoyed a fairly normal dentition until five years previously, when the maxillary incisors had become everted and on both sides of the right central incisor large diastemata had developed. The central diastema was not particularly pleasing to the patient. In habitual occlusion, the anterior teeth made contact. The anomaly gradually developed after a dentist had constructed a bridge in the maxillary arch on the right and the articulation was deflected to ventral. In addition, the gingiva had retracted in many places. Periodontal pockets of 5 to 6 mm were to be found interproximally and 3- to 4mm palatally around the maxillary incisors. Mesial to the maxillary right first premolar, which functioned as an abutment for the bridge, was a 7mm pocket. The mandibular premolars had pockets 5 to 6mm, deep and the maxillary left second molar had paradontitis that had progressed so far that it was doubtful if the tooth could be kept. The gingiva overall was swollen and bled easily if touched (Figs 39.1 and 39.2). 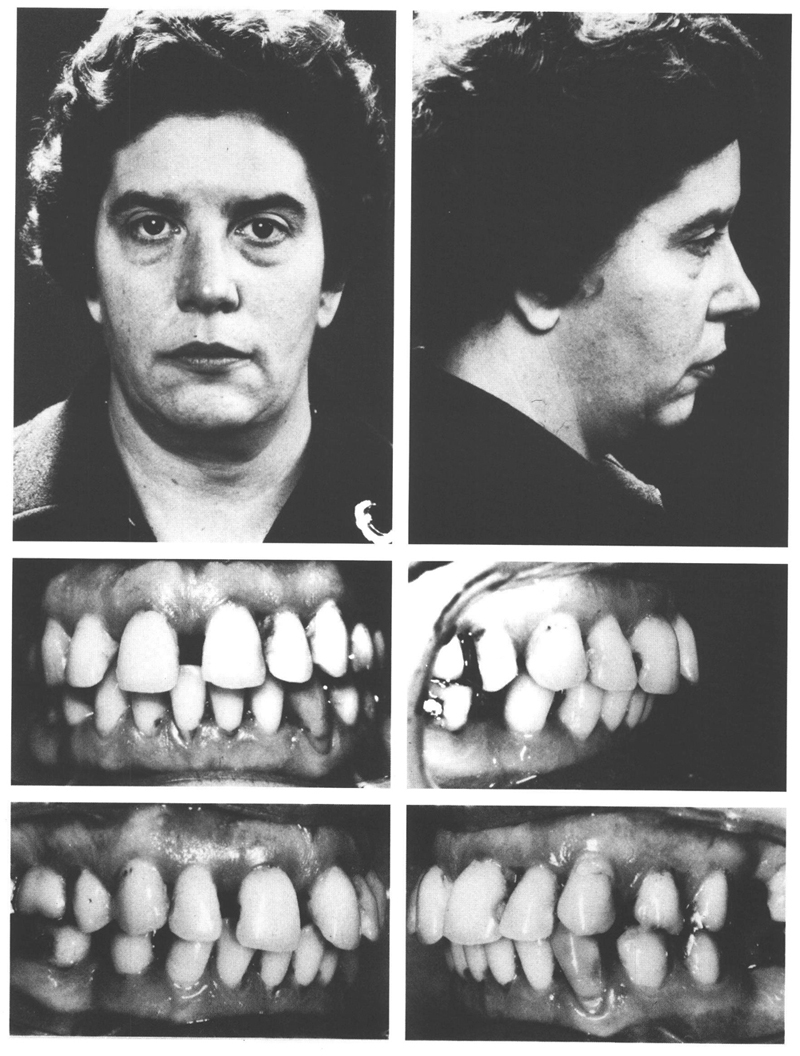 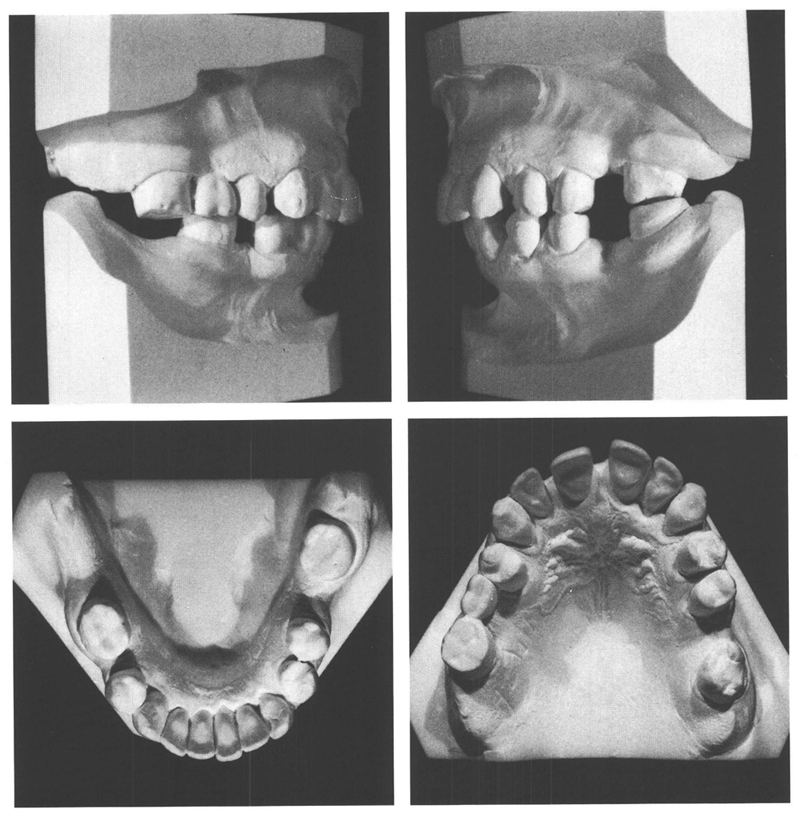 Figs 39-1 and 39-2 A woman aged 43 y, 3 mo presented with a poorly maintained dentition that showed no abnormalities until five years previously. The maxillary central incisors are everted, with large diastemata on both sides of the right central incisor. The gingiva are swollen and inflamed. At different places there are pockets of 5 to 6mm depth. There are several posterior teeth missing and a bridge has been placed in the maxillary arch on the right. Its presence provides a step in the occlusal surfaces in that region. When the teeth are closed from rest, the mandibular right first molar glides 2 mm to ventral over that step. Although this forced bite has been present for five years there are no symptoms of functional problems. However, the maxillary incisors, especially the central incisors, have been displaced to labial and large spaces have appeared between the incisors.

Prior to embarking on any orthodontic treatment the periodontium needed to be brought into as healthy a state as possible. The initial treatment comprised supragingival and subgingival plaque and calculus removal, root planing, and polishing. In some places, the pockets were surgically eliminated. After four months, the paradontal tissues were healthy and optimal oral hygiene was being maintained. It was decided to provide a maxillary removable plate; the premature contact on the bridge was ground away. Because the mandibular incisors struck the plate, the bite in the posterior regions was slightly opened; this permitted the patient to close more easily in central occlusion. Moreover, it eliminated the contact between the maxillary and mandibular incisors, allowing the maxillary incisors to be retracted. This was done by means of divided labial arches. During the orthodontic therapy, the patient underwent professional scaling and polishing every two months. Despite this, it proved impossible to preserve the maxillary left second molar.

After orthodontic treatment for a year, the objective had been reached. The maxillary incisors had been retracted, the diastemata closed and habitual occlusion and central relation now coincided (Fig 39.4). After a period of six months’ retention, bridges were provided in the posterior regions, which improved the occlusion considerably. In addition, the maxillary incisors and canines were bonded together with composite. From the records collected six months later, it seems that a satisfying result has been obtained. The dentition fulfils both functional and esthetic demands (Fig 39.3). 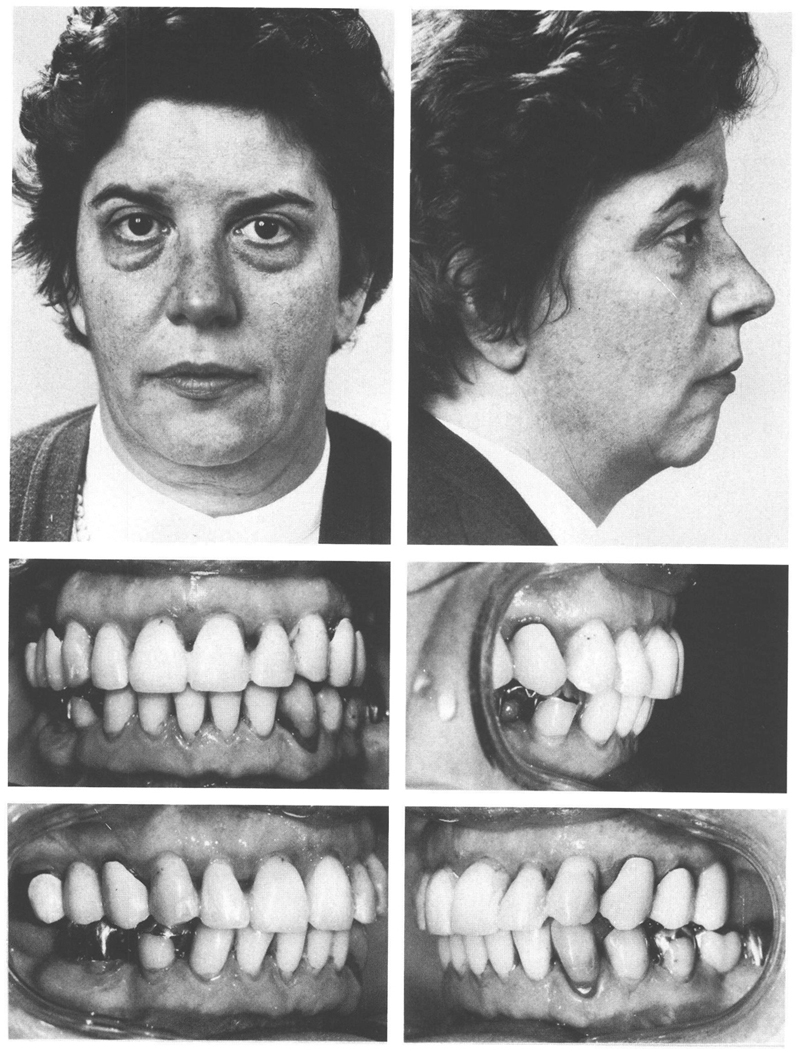 Fig 39-3 At the age of 47 y, 1 mo, orthodontic treatment had been finished 18 months previously and the posterior bridges subsequently made have been in service for one year. The six maxillary incisors have been bonded together at their contact points with composite resin as a form of permanent retention. 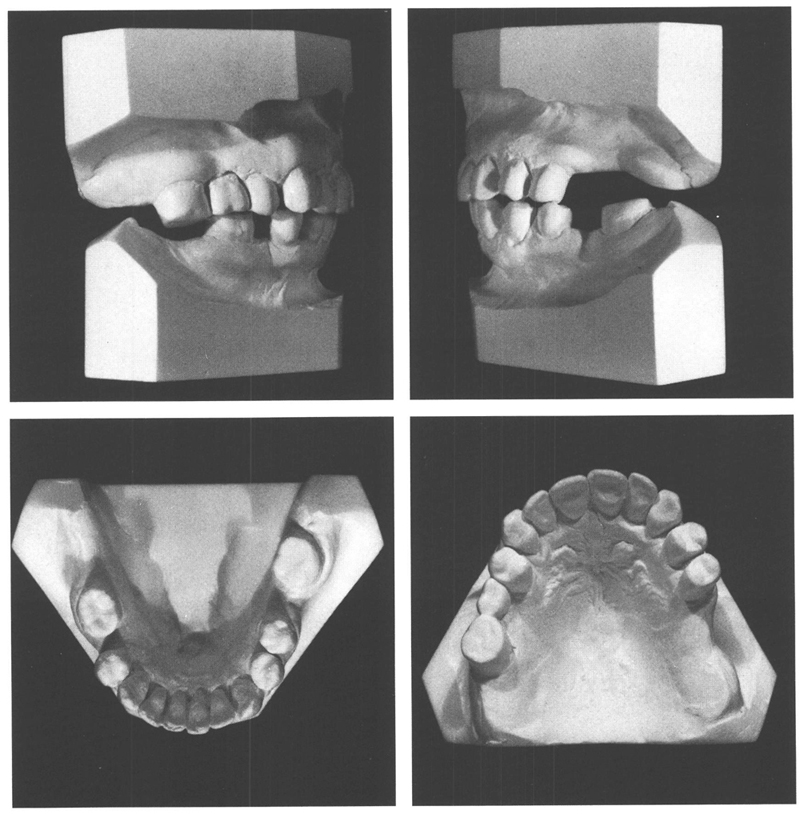 Fig 39-4 Dental casts obtained at the termination of orthodontic treatment and before the provision of bridges (age, 45 y, 7 mo).

Composite bonding of the incisors however is fragile and can be broken. Therefore a plate was provided that the patient could insert immediately if one of the bonds broke down and could not be repaired on the spot (