A boy aged 7 years, 9 months displayed a class III anomaly with a slightly large lower face and an underdeveloped midface. His general growth was retarded, as was the development of his dentition; the latter was illustrated by the fact that his first deciduous tooth did not emerge until after his first birthday. The transition of his dentition also appeared to be slow. For example, the first permanent molars had not yet emerged. However, the mandibular permanent central incisors were indeed present in the mandible. They were tipped lingually and crowded. Diastemata were present in the maxillary anteriors. There was a mesio-occlusion of 1 PW on both sides. The deciduous molars and canines in the maxilla were in endo-occlusion and the incisors had a reversed overbite without incisal contact. The overbite was +1 mm, the overjet –3 mm, while the mandible could not be moved distally more than ½ mm past the position of habitual occlusion. The oral hygiene was poor, and there were various decalcifications and cavities; most of the deciduous molars had restorations already (Figs 37.1 and 37.2). 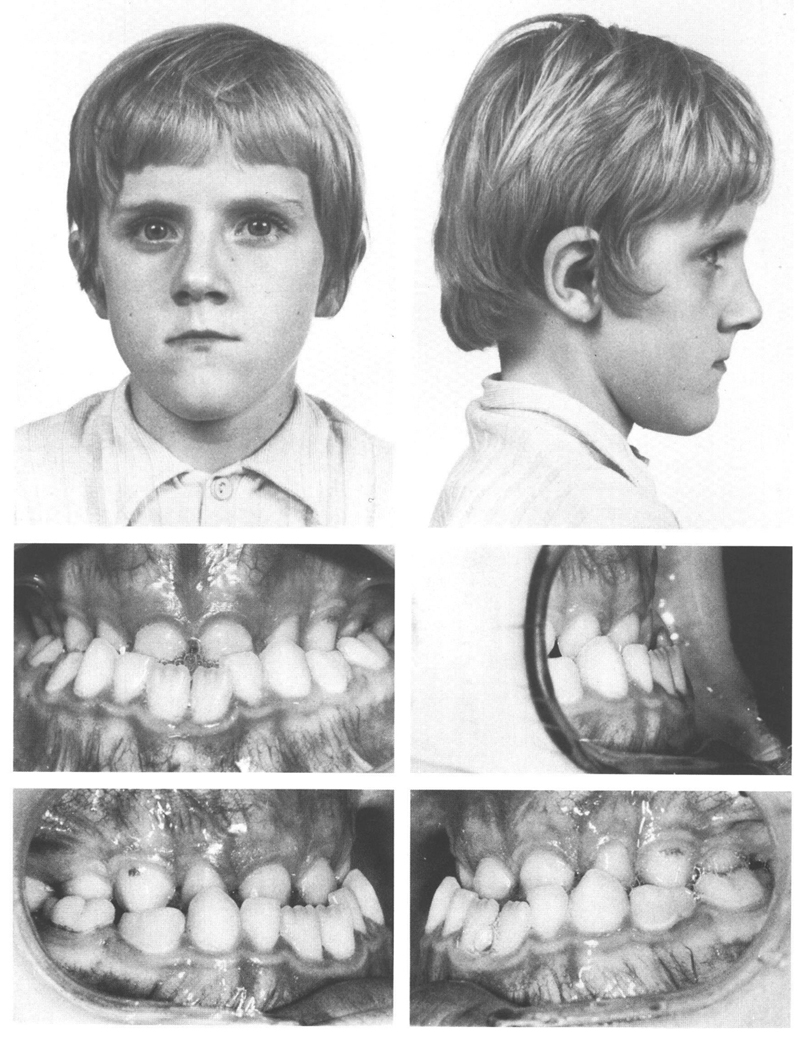 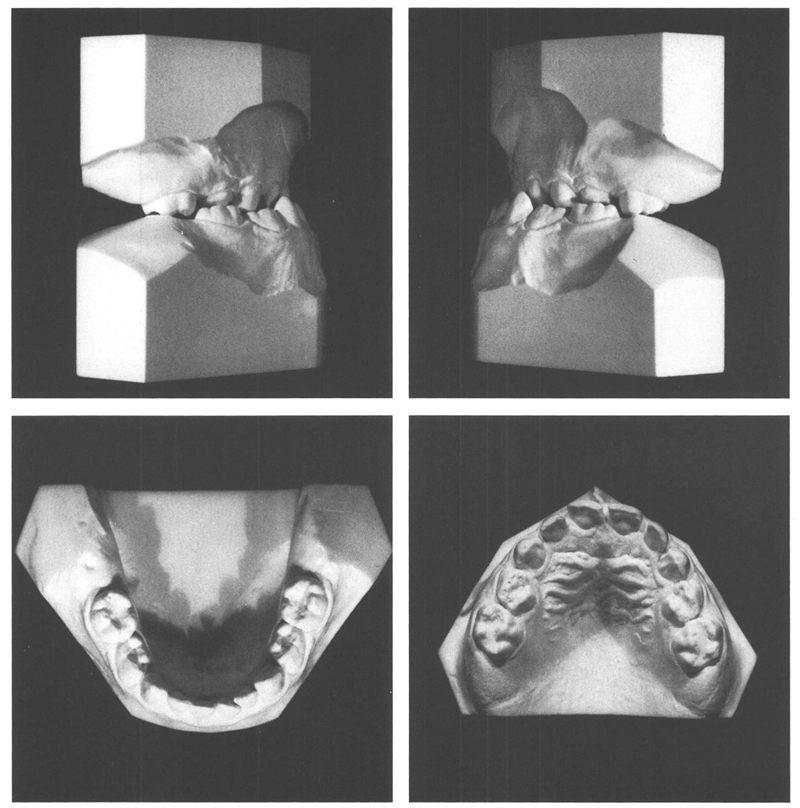 It was decided that for the moment no treatment would be given but that both the development of the dentition and facial growth should be kept under observation, particularly since at present, the boy had no trouble with the anomaly. After emergence of the permanent incisors, sagittal contact was established between them. At the age of 10 years, he could get the incisal edges of the opposing incisors to meet.

At the age of 11 years, there was still a full crossbite except where the maxillary left lateral incisor closed labial to the mandibular deciduous canine on that side. The facial appearance showed only mildly the characteristics of a class III anomaly because the reversed relationship of the upper and lower lips was limited in degree and the chin was not excessively dominant (Figs 37.3 and 37.4). 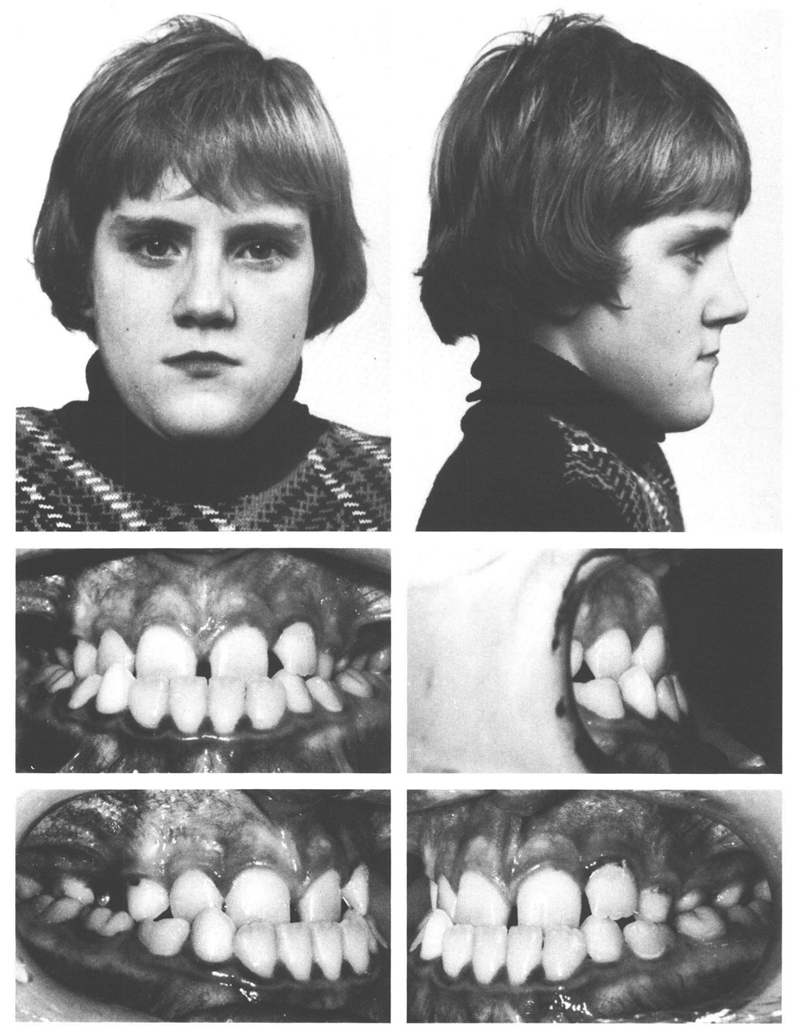 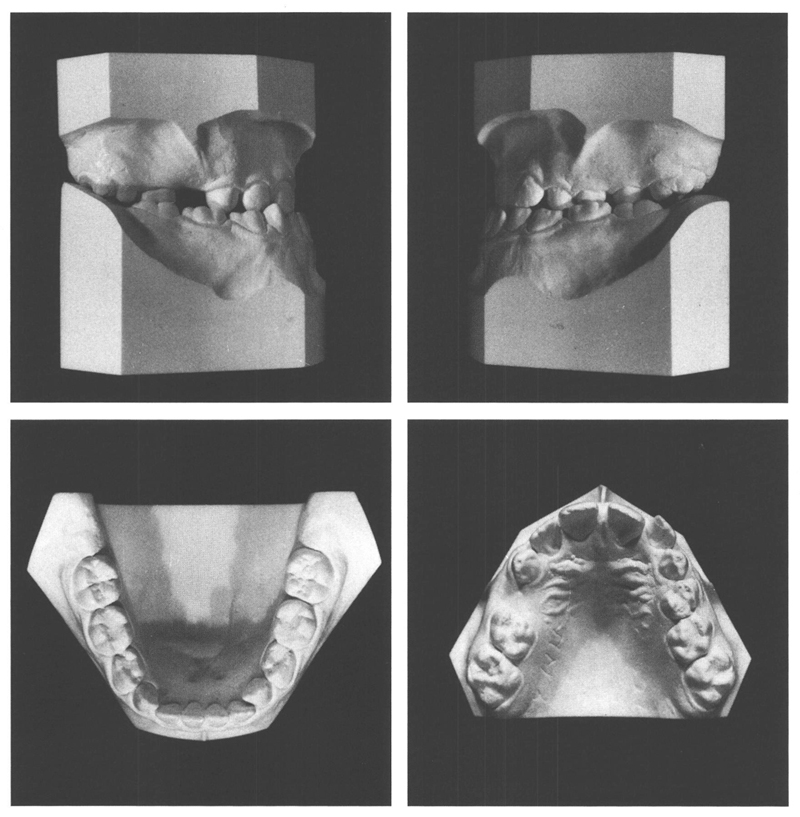 Figs 37-3 and 37-4 At the age of 11 y, 0 mo there is a class III profile evident to a limited extent. The lower lip protrudes a little in front of the upper lip and the chin is a fairly dominant facial feature. The midface certainly is relatively underdeveloped, although it is less so than three years previously (Fig 37.15). The incisors have erupted fully and are in contact, although the maxillary left lateral incisor is the only tooth in the maxillary arch that does not fall inside the mandibular dental arch. There is just sufficient room in the mandibular arch to accommodate the teeth, while in the maxillary arch there are anterior diastemata. On both sides the first permanent molars are in mesio-occlusion to the extent of 1 PW.

Shortly after his eleventh birthday, bands were placed on the first permanent molars and the deciduous canines, with molar tubes and elastic hooks, respectively, to attach elastics with which to provide ventral traction from vertical posts on a chincap. At the same time, the projections on the bands provided undercuts that would improve the retention of the plate to be fitted for the purpose of fixing the maxillary teeth into one unit. The patient was asked to wear the plate and the chin cap with elastics while sleeping.

At the age of 11 years, 7 months, the reversed overbite and the crossbite in the posterior teeth had been eliminated. The maxilla had developed significantly to ventral and it was considered acceptable to end the facial orthopedic therapy (Figs 37.5 and 37.15). Six months later, a slight mesio-relation of the jaws was found and some of the improvement in the occlusion that had been gained was now lost. It was decided to replace the molar bands, make a new maxillary plate, and wear the chincap with vertical arms and elastics again. Four months later, a neutro-occlusion existed again and the patient was asked to wear the appliances every other night. Four months later, the frequency of wearing was reduced to every third night. 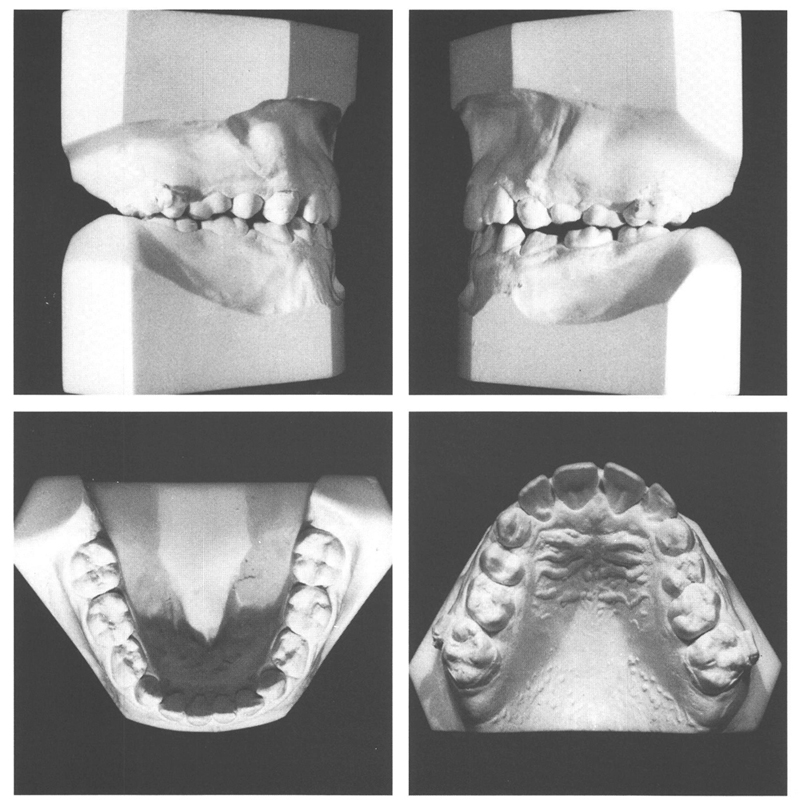 Fig 37-5 At the age of 11 y, 7 mo the maxilla had been brought obviously forward (Fig.37.15). The posterior teeth are in neutro-occlusion. A normal transverse occlusion has occurred on the right side but on the left side an />