A girl, 10 years and 9 months old, exhibited neutro-occlusion with, probably as the result of thumb-sucking, infraposition and eversion of the maxillary incisors. Diastemata were present between the maxillary incisors, and mild crowding could be seen in the mandibular anterior region. She had a harmonious facial appearance, normal lip position, adequate lip seal, and an unrestricted nasal airway (Figs. 3.1 and 3.2). 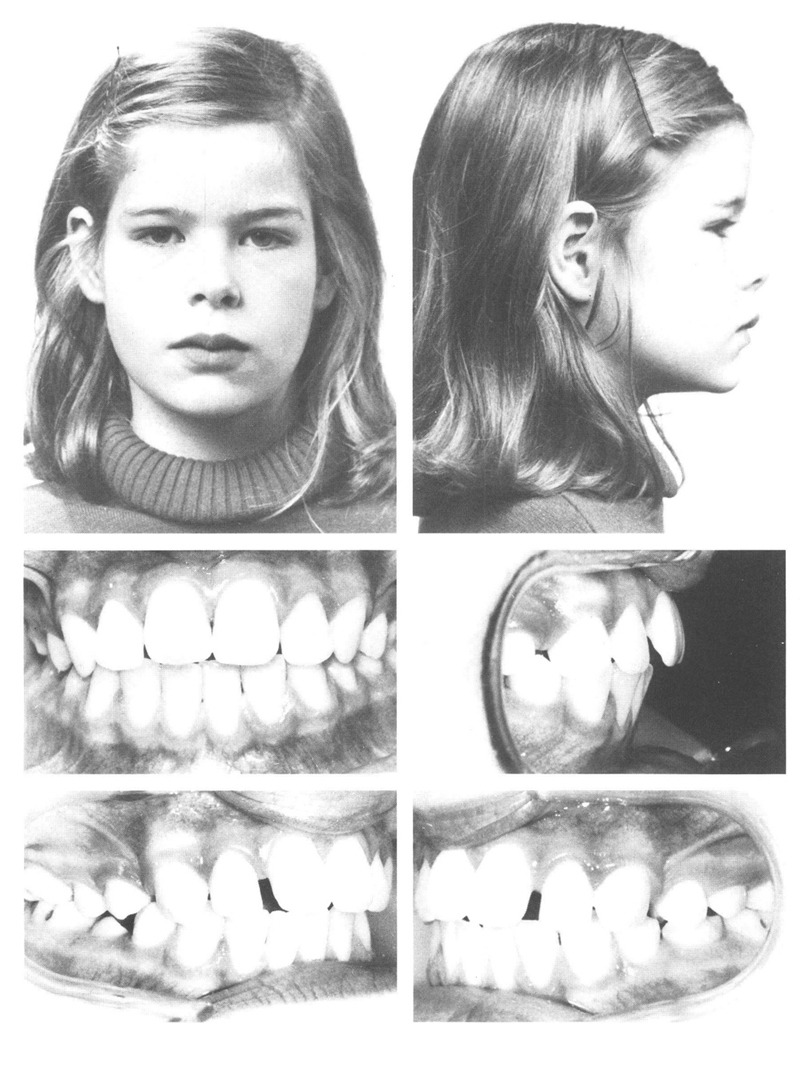 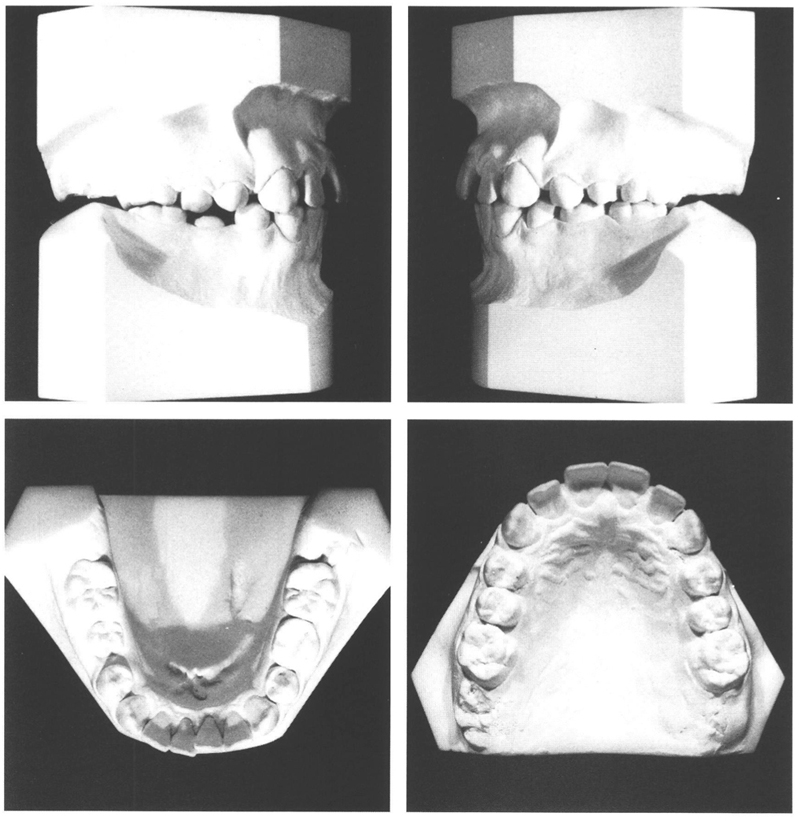 First of all, an attempt was made to discourage the thumb-sucking.36 It would be expected that once the abnormal habit had ceased, spontaneous correction might obviate active orthodontic treatment. It can be seen that only the maxillary central incisors were in infraposition and too far to labial, while still sufficient room was available in the dental arch for achieving good alignment. The lateral incisors were in their correct places.

It was not only the maxillary central incisors that had been misplaced by the sucking habit; the slight linguoposition of the mandibular left central incisor could probably be attributed to it too.

Alas, it appeared that it was not possible to cease thumb-sucking. Consequently, two months later, it was decided that the sucking habit would be discouraged with use of a maxillary removable plate, which would procure the desired improvement in the positions of the maxillary incisors.

The plate was provided with retentive clasps and two divided labial arches to retract the central incisors.4 Four months later, the goal had been reached (Figs 3.3 and 3.4). Retention was not provided. Tongue interposition and thumb-sucking had ceased and did not return. 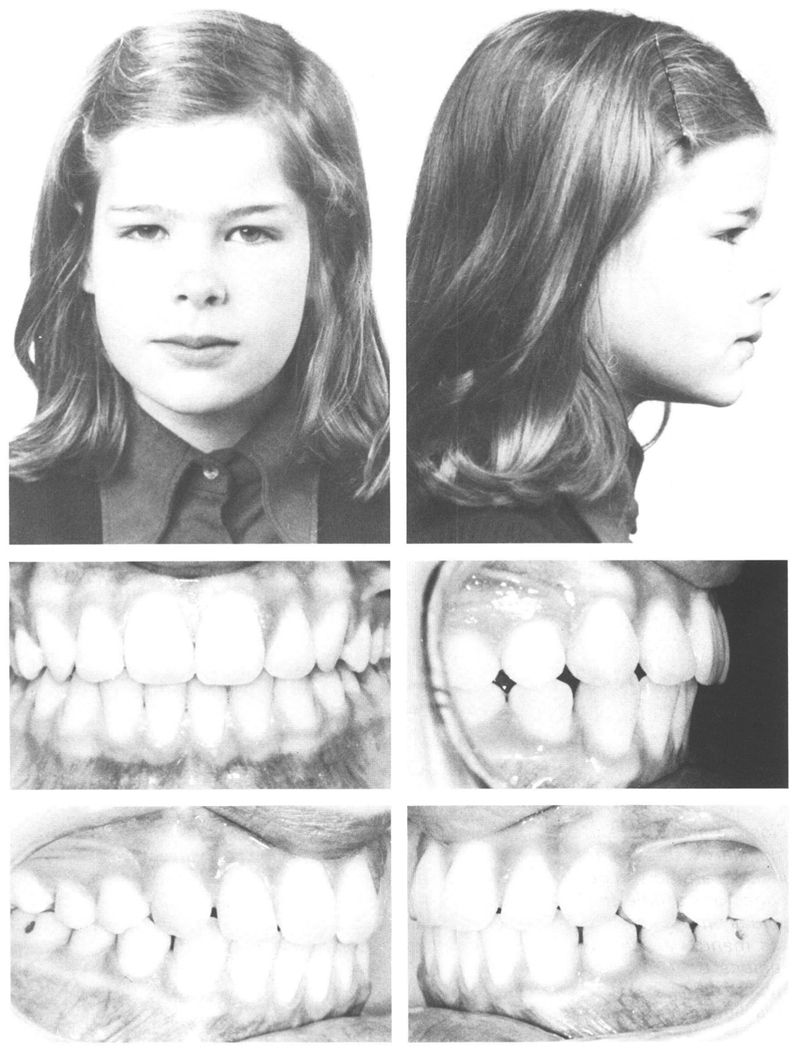 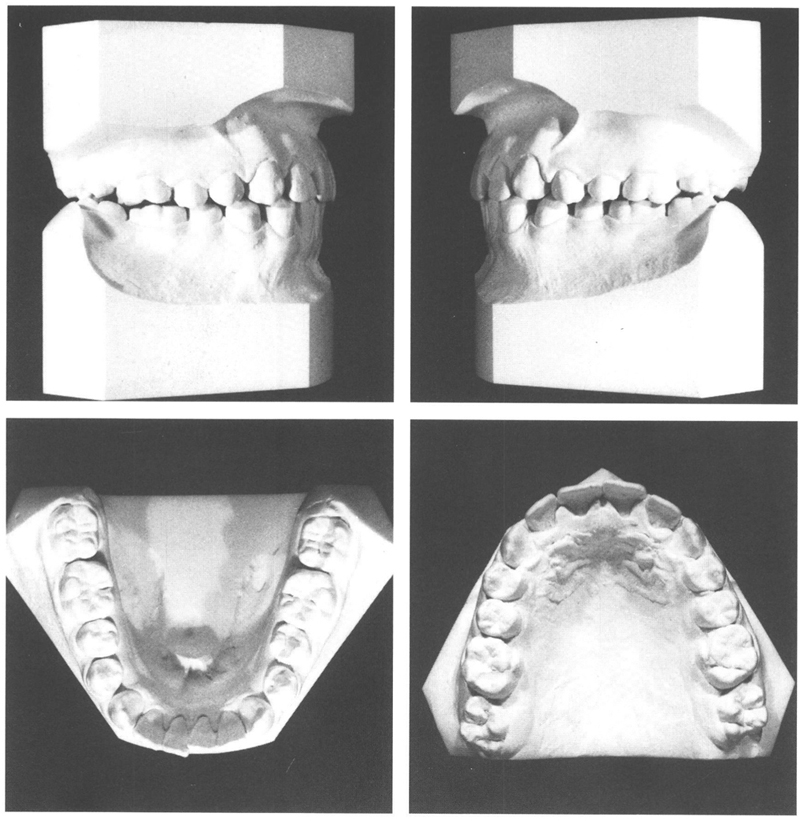 Figs 3-3 and 3-4 The situation at 11 y, 3 mo, after four months of treatment with a maxillary removable plate with two divided labial arches. Both maxillary central incisors are now in good alignment and contact the mandibular incisors. Their incisal edges are a little lower than those of the lateral incisors, an arrangement that is visually more acceptable than when all four are at the same level. The overlapping in the mandibular incisors has not improved, despite the diastemata in the premolar regions on both sides. The gingiva palatal to the maxillary incisors had become hypertrophic, a reaction to wearing the plate; shortly after discarding the appliance this situation returned to normal.