A girl aged 11 years, 1 month exhibiting a disto-relation, had a class II/1 anomaly combined with an open bite extending from, and including, the canines on the left to the first premolars on the right. The involved teeth showed no vertical overlap and a gap of 3 to 4 mm existed between the opposing incisors. She sucked two fingers intensively with the lips closing around those fingers when they were in place. From this it was evident that she could breathe freely through her nose although generally she kept her mouth open. Her tongue, which appeared to be relatively large, was pressed between the anterior teeth during swallowing and lay between them when at rest. There was a suggestion of a lisp, though it could been due to the existence of the open bite rather than being a basic speech defect. A disto-occlusion of ½ PW existed on both sides with an overjet of 7 mm. Enamel hypoplasia could be seen on the maxillary incisors (Figs 28.1 and 28.2). 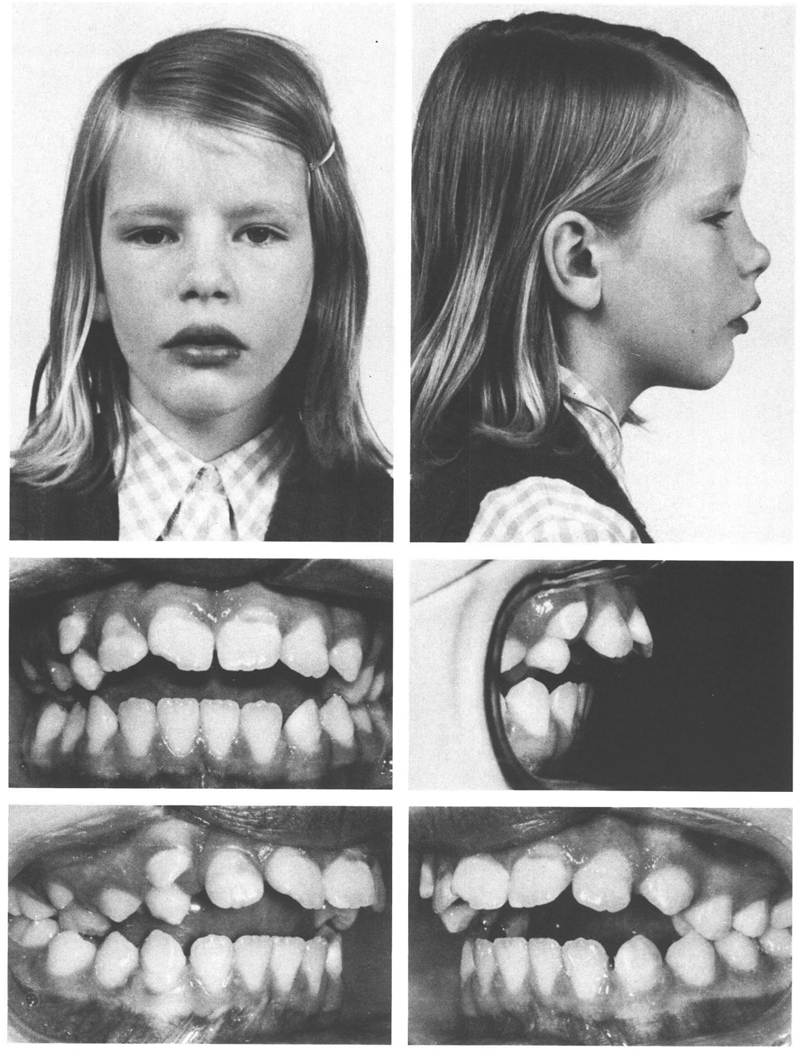 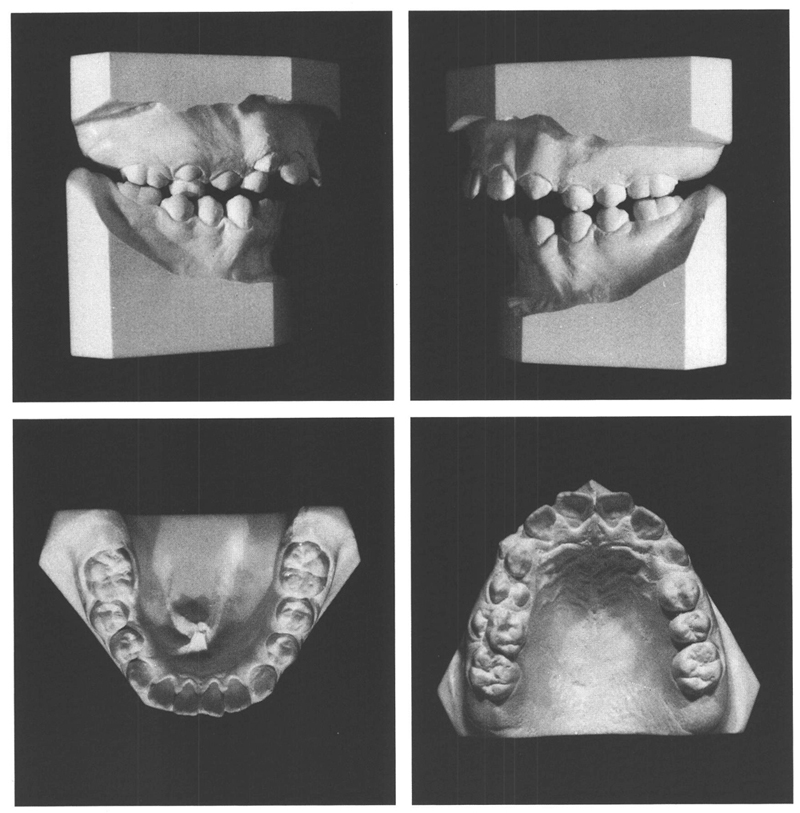 Figs 28-1 and 28-2 A girl aged 11 y, 1 mo presented with a disto-relation, a class II/1 anomaly of ½ PW and an anterior open bite from, and including, the canines on the left to the first premolars on the right. She sucked vigorously on two fingers and if she was not doing that she held the anterior part of her tongue between the dental arches when at rest, but particularly during swallowing and speaking. The maxillary incisors show enamel hypoplasia and the distal incisal angle of the maxillary right central incisor has been fractured. The overjet is 7 mm and the middle of the mandibular dental arch is 2 mm to the right of that of the maxillary arch (the intraoral photograph of the left side was taken with the mandible posed too far ventrally).

The decision was made to attempt to eliminate the finger-sucking and to correct the abnormal jaw relationship with the use of a parietal headgear. At a later stage it would be necessary to use a partial fixed appliance to retract and extrude the maxillary incisors.

At the age of 11 years, 3 months, the headgear was fitted. The finger-sucking had stopped by that time. Six months later, the maxillary anteriors were banded with the band material extended cervically to the gingival margins to protect the enamel. To begin with a .0175” twistflex archwire was used; three months later, this was replaced with a solid .019” × .026” archwire (Figs 28.3 and 28.4). 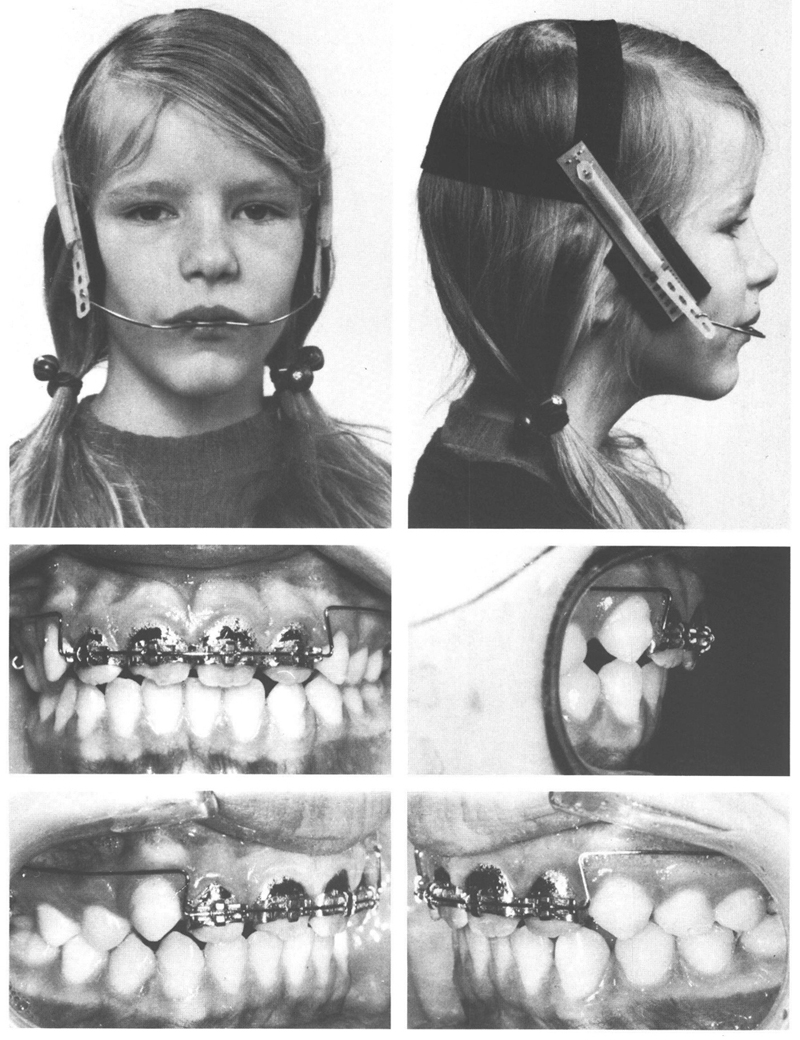 Fig 28-3 The situation at the age of 12 y, 2 mo, eleven months after the beginning of treatment. Bands with edgewise brackets have been placed on the maxillary incisors. Initially a .0175” twistflex archwire was used and thereafter a .019” × .026” rectangular arch to retract and intrude the maxillary incisors. The bands have been extended to the cervical margins labially to protect the hypoplastic enamel. A parietal headgear could be used via double molar tubes. 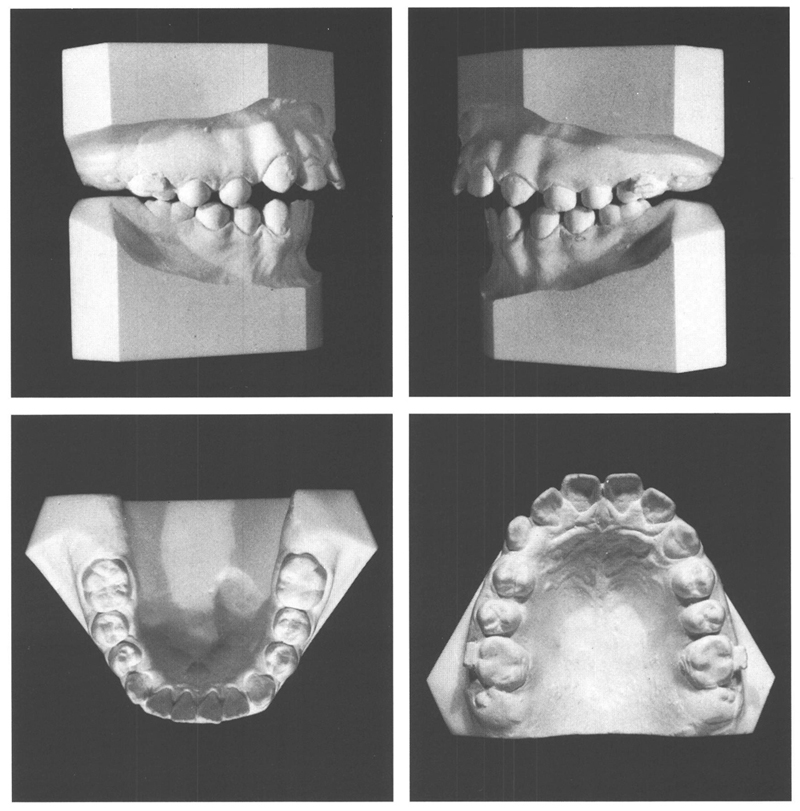 Fig 28-4 Dental casts of the situation prior to fitting the partial fixed appliance, at the age of 11 y, 9 mo. In the molar region a neutro-occlusion has been obtained but the anterior open bite has been only minimally reduced.

At the age of 12 years, 9 months, the appliances were discarded. A positioner was provided for minor corrections (Figs 28.5 and 28.6). This positioner was worn for two months for some hours during the day, and all night. After this, the positioner was worn at night only and with reducing frequency for seven months. The records obtained subsequently show a slight return of the open bite with an accompanying increase in the overjet (Figs 28.7 and 28.8). 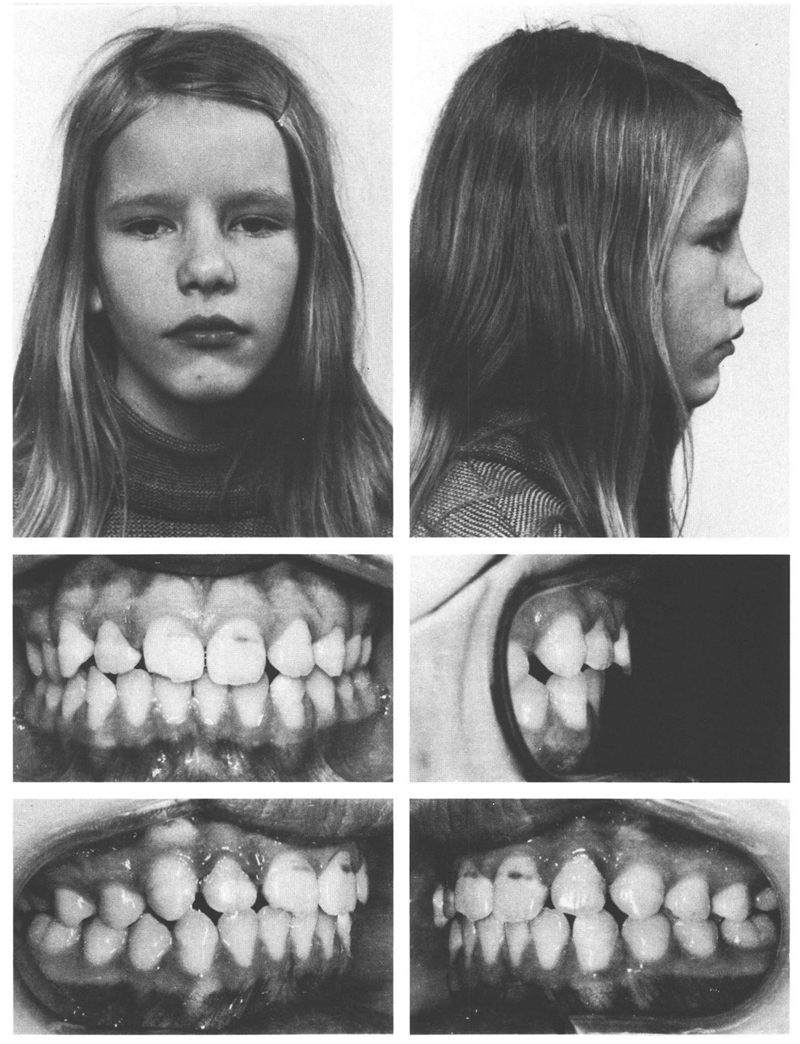 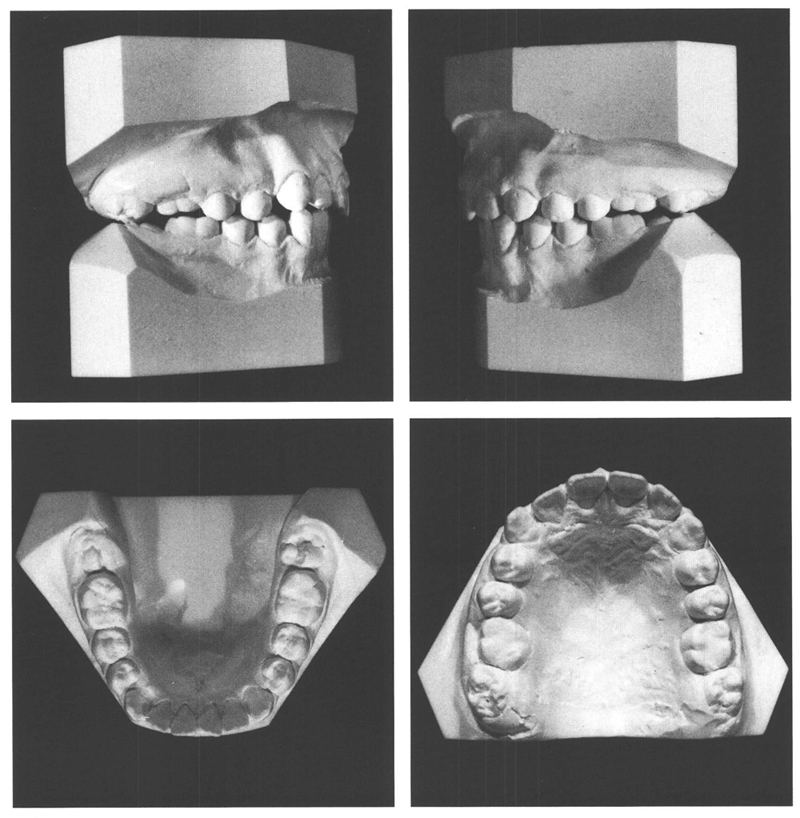 Figs 28-5 and 28-6 At the age of 12 y, 9 mo after an active treatment time of 1½ years the appliances have been removed and a positioner provided. The patient, who had stopped sucking her fingers before treatment commenced had by now learned to keep her mouth closed at rest. The profile is noticeably improved. The maxillary and mandibular incisors make contact, although the overbite is shallow. The parietal headgear has caused the maxillary first permanent molars to assume an infra-position. Moreover they are now too far palatally, something that in part can be attributed to the lack of occlusal contact. Because of the fact that the maxillary canines were not included in the appliance/>