A girl 8 years 11 months of age, with a slightly receding chin, exhibited a class II/1 anomaly (¾ PW disto-occlusion). There was marked mesiopalatal rotation of the maxillary central incisors. She could breathe easily through her nose and kept her mouth closed. The mandibular left second premolar was congenitally absent. Mild crowding existed in the anterior of both dental arches (Figs 22.1 and 22.2). 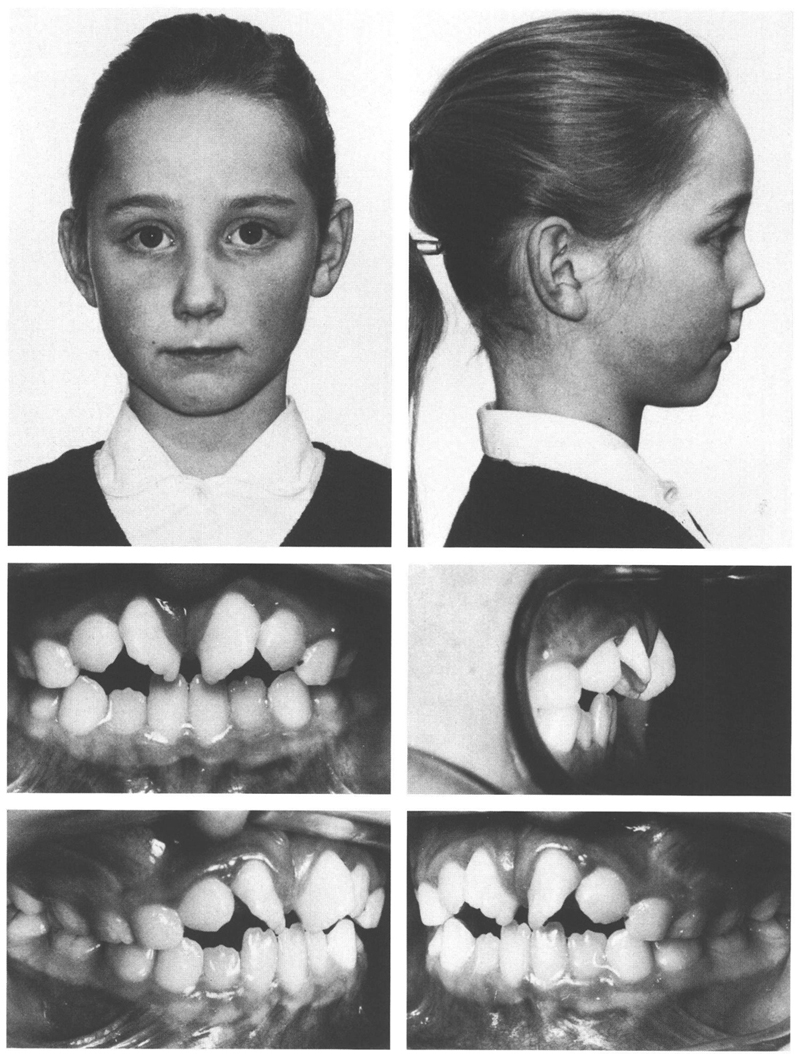 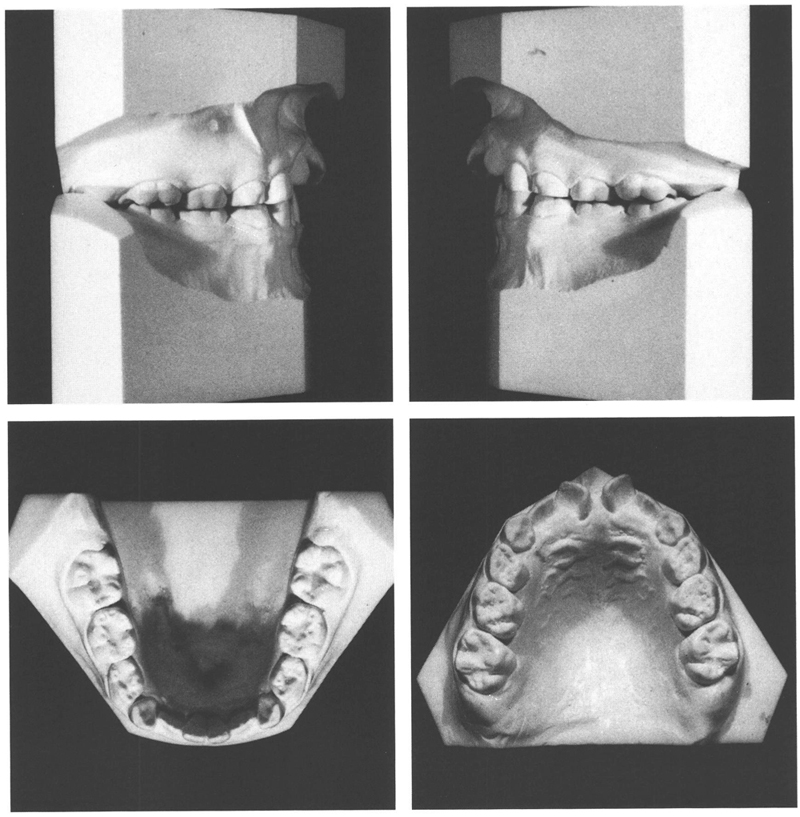 Figs 22-1 and 22-2 A girl aged 8 y, 11 mo with a class II/1 anomaly and markedly rotated maxillary central incisors. She can breathe well through her nose and has competent lip seal. The chin lies somewhat caudally with respect to the rest of the face. Only the mandibular central incisors are fully erupted; the rest are still half-covered by the gingiva. Both dental arches are well-formed and show little abnormality except for the mesiopalatal rotation of the maxillary central incisors. There is solid interdigitation of the posterior teeth.

It was decided to engage in treatment immediately and to correct the rotations of the maxillary central incisors before they erupted fully. The disto-occlusion would be corrected with a cervical headgear. Whether or not to retain the mandibular left second deciduous molar would depend on the degree of root resorption. A decision in this regard would be postponed for the time being.

At the age of 9 years, 0 months, bands with double molar tubes were fitted to the maxillary first permanent molars and brackets were placed on the four maxillary incisors. A 0.015” twistflex arch was installed. In conjunction with this, the maxillary deciduous canines were extracted. This provided room to overcorrect the maxillary incisors. It was unlikely that the permanent canines would be displaced palatally by the lateral incisors, since palpation showed that the canines lay buccally. After two months a .0175” twistflex arch was placed. During subsequent visits, the arch was activated. A cervical headgear was fitted to correct the disto-occlusion. Over-correction of the rotations was obtained with the use of a .019” × .026” archwire and later use of wedges placed at the distal sides of the brackets between the brackets and the archwire (see Fig.14.14D). Then offsets were placed in the archwire itself. After seven months, the desired overcorrection had been achieved and this was maintained for a further ten months (Fig. 22.3).

Fig 22-3 At the age of 10 y, 7 mo the maxillary incisors have been over-corrected and already in retention for ten months.

The partial fixed appliance was removed at the age of 10 years, 7 months, and the treatment continued just with the headgear to correct the remaining disto-occlusion and obtain more space to accommodate the canines (Fig 22.4). It was hoped that the maxillary central incisors would not rotate back too much, but they did indeed relapse somewhat. So, at the age of 11 years, 9 months, the central incisors had some slight mesiopalatal rotation once more. In the meantime, the disto-occlusion had been eliminated and there was sufficient room for the maxillary permanent canines to take up a good position spontaneously (Fig 22.5). The mandibular left second deciduous molar was in good function, was not ankylosed, and the roots showed hardly any resorption since the beginning of treatment. It was decided to retain that deciduous tooth. If it should be lost in the future, then something such as a bridge could be provided in its place. The relapsed rotations of the maxillary incisors were not corrected with a fixed appliance — at the request of the patient — but with elastics attached to the headgear (Fig 22.14). After five months, they were again in good alignment and it was proposed that the headgear and elastics be worn less. At the age of 12 years 8 months, a good result had been obtained and treatment was terminated (Figs 22.6 and 22.7). 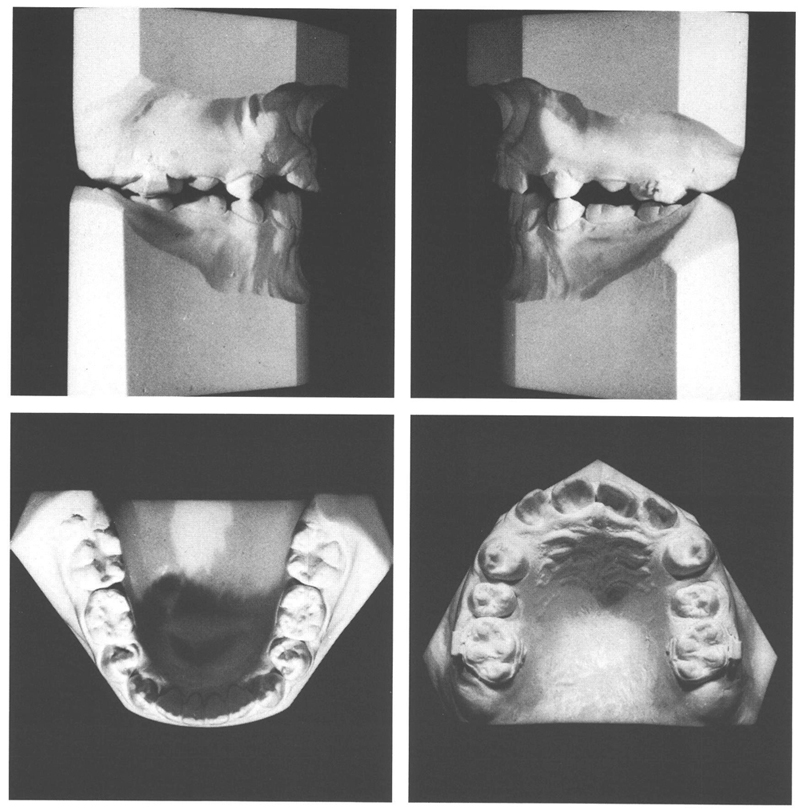 Fig 22-4 The dental casts at age 10 y, 7 mo, after removal of the bands and brackets, show that there is inadequate room for the maxillary canines, which are located buccally in the alveolar process at the level of the reflection of the mucosa. 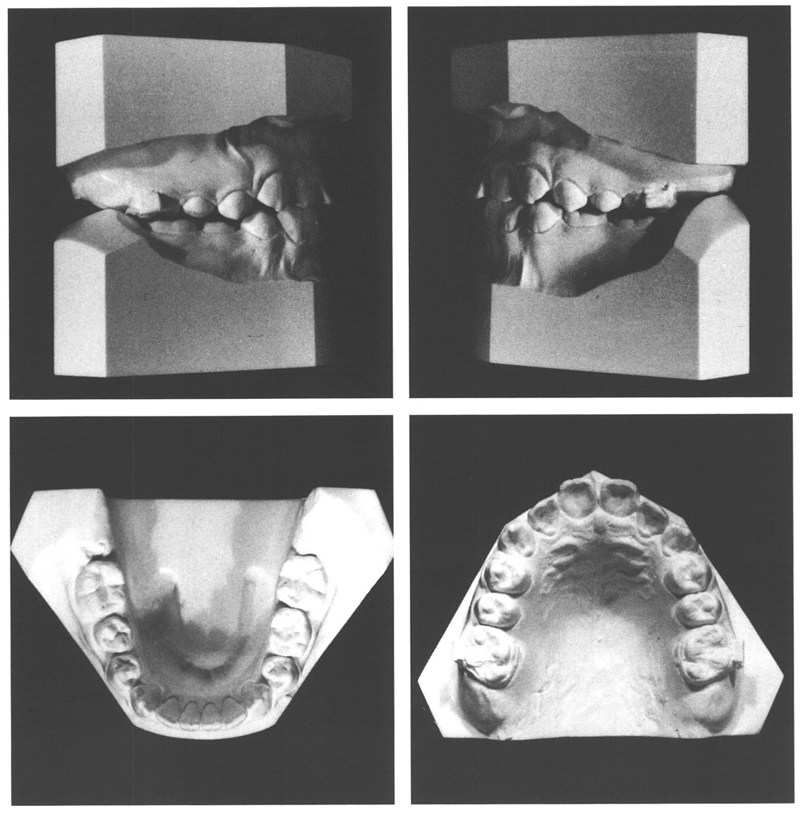 Fig 22-5 At the age of 11 y, 9 mo there is neutro-occlusion and sufficient space has been gained to accommodate the maxillary permanent canines. The maxillary central incisors have only rotated back a small amount, and now are in acceptable alignment although a little too far inclined to labial.