A boy aged 8 years, 5 months exhibited a class I anomaly with a ventral forced bite, with no other functional abnormalities. He could bring his mandible sufficiently far back for the incisal edges of the right central incisors to meet. In that situation, there was a slight disto-occlusion. The maxillary second deciduous molars were badly carious, with the result that the mesiodistal size of those teeth was reduced (Figs 21.1 and 21.2). 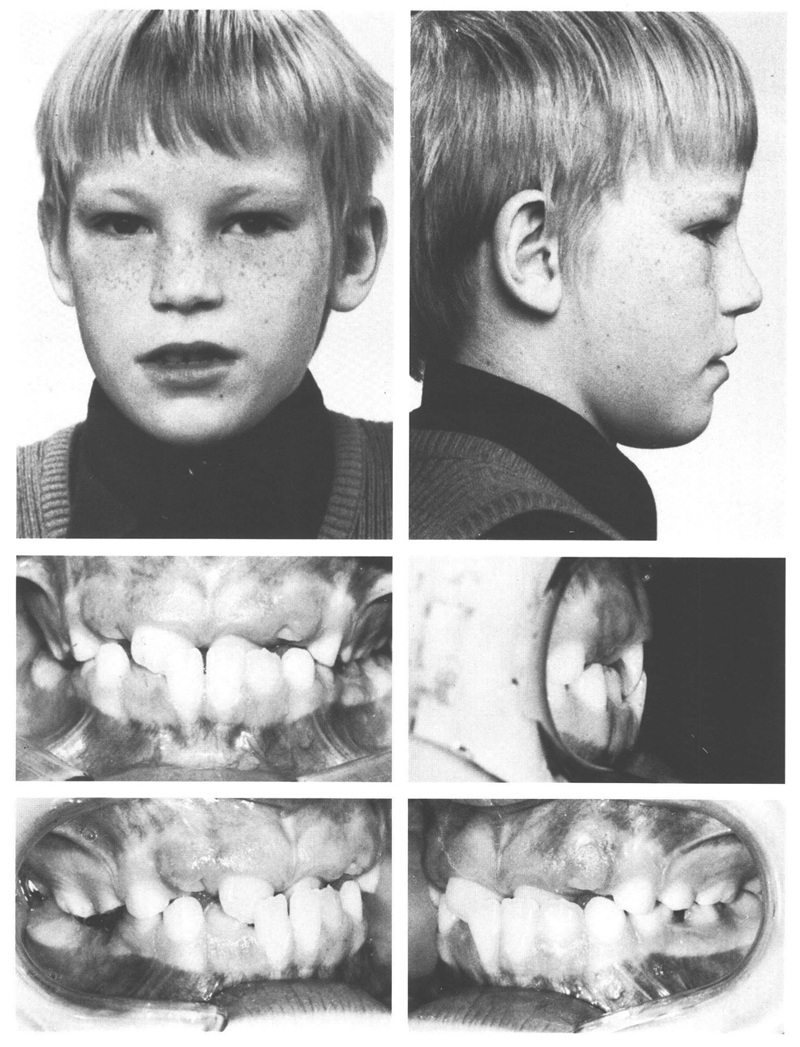 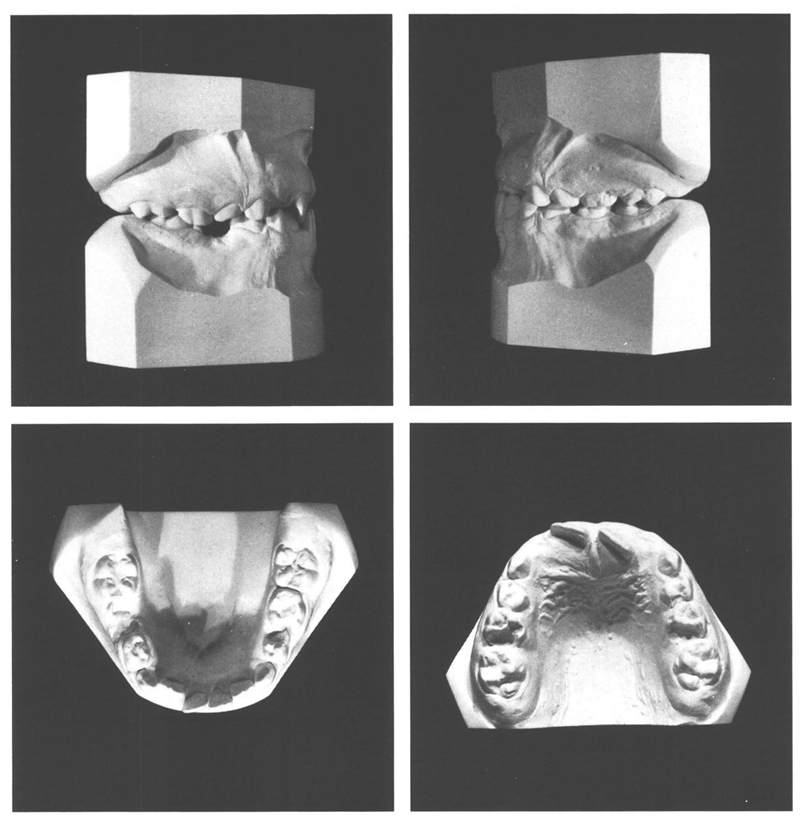 Figs 21-1 and 21-2 A boy of 8 y, 5 mo with a reversed anterior overbite associated with a ventral forced bite, so that a slight disto-relation has been masked. He can bite in a sufficiently retruded position so that the right central incisors meet edge-to-edge. The dental arch perimeters both have been reduced by caries of the deciduous molars. The central incisors in the mandible are tipped a little to labial and those in the maxilla are mildly tipped palatally. In reversed overbite, the incisors make contact with the right maxillary central incisor lingual to the mandibular central incisor but labial to the lateral incisor. In the maxilla, the lateral incisors have only recently emerged and have not yet established contact with the opposing teeth.

It was decided to correct the reversed overbite as quickly as possible, also with the object of preventing the lateral incisors making faulty contacts as they emerged further. In view of the considerable overbite and the desired reciprocal displacement of the involved teeth, the use of a tongue blade was an obvious solution (see Fig 20.3). After two weeks, both the reversed overbite and the ventral forced bite had been eliminated and the mandibular dental arch occluded a few millimeters further to distal (Figs 21.3 and 21.4). The further eruption of the lateral incisors needed no guidance and there were no other reasons for active intervention. It would be sufficient to maintain observation of his dental development and facial growth. It would not be until the second transitional period that orthodontic treatment might be initiated. 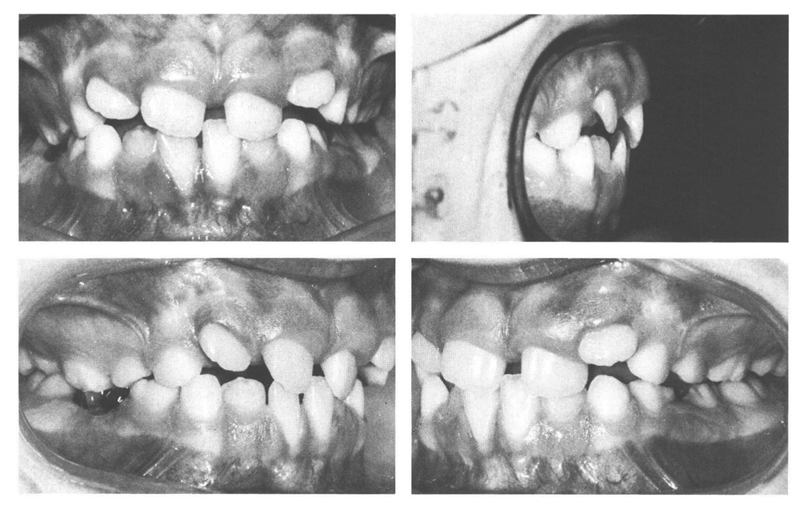 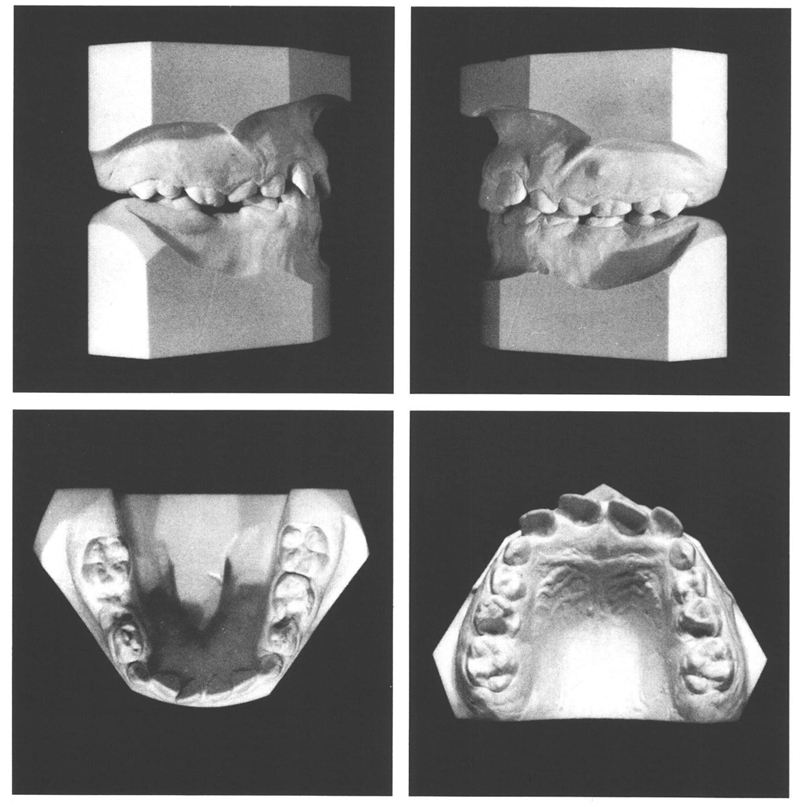 Figs 21-3 and 21-4 At the age of 8y,6 mo, use of a tongue blade for only two weeks has secured correction of the reversed anterior overbite. In the mandible, the two central incisors and the left lateral incisor have moved lingually. In the maxilla, both central incisors have moved labially and as they erupt both lateral incissors will assume contact labially to the mandibular incisors.

During the five-year period of observation, the situation in the maxillary and mandibular anteriors did not improve as much as expected. Although adequate space was available in the dental arches and the occlusion did not present impediments, spontaneous corrections barely came about. Gradually the spacing vanished and an increasing degree of crowding developed. The carious deciduous molars were neither restored nor extracted (Figs 21.5 and 21.6).

At age 12 years, 10 months, the lingually tipped mandibular left second deciduous molar and the persistent maxillary right deciduous canine were removed (Figs 21.7 and 21.8). Ten months later, a cervical headgear was fitted and eight months later a maxillary removable plate was inserted. The latter was replaced by brackets on the maxillary incisors four months later, incorporating a .0175” twistflex arch-wire. To intrude the maxillary incisors and apply torque to them, a .019” × .026” archwire was subsequently fitted and a Kahn spur was added to the cervical headgear. After active treatment for one year and ten months, the appliances were removed and a maxillary removable retainer was provided. This retainer was worn continuously for three months and for the next three/>