A girl aged 8 years and 2 months with a harmonious face and adequate lip seal displayed a class II/1 anomaly, which was masked to some extent by a forced bite to ventral caused by the maxillary right lateral incisor. The patient could not close into occlusion in centric relation due to the interference of that lateral incisor. Beside the ventral forced bite, there were no functional abnormalities. She had sucked her thumb till she was 6 years old. The mandibular arch had diastemata in the anterior region and the maxillary arch had insufficient room to accommodate the right lateral incisor, which had emerged palatally. The interdigitation of the posterior teeth was solid (Figs. 20.1 and 20.2). 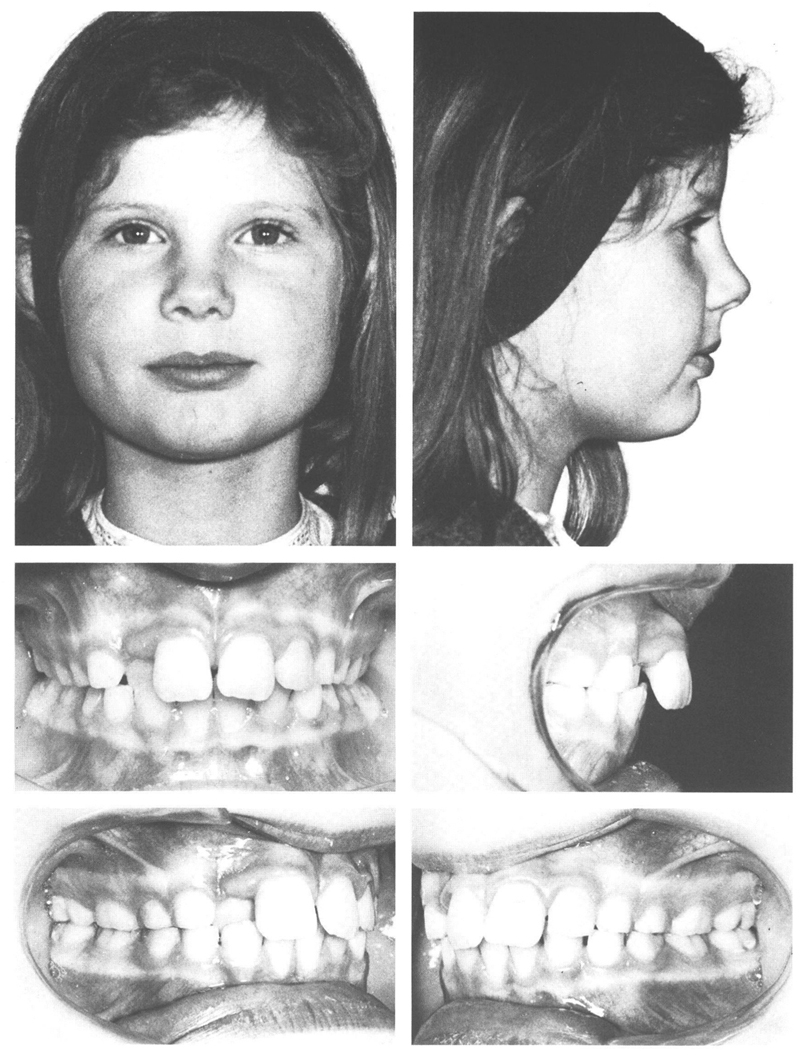 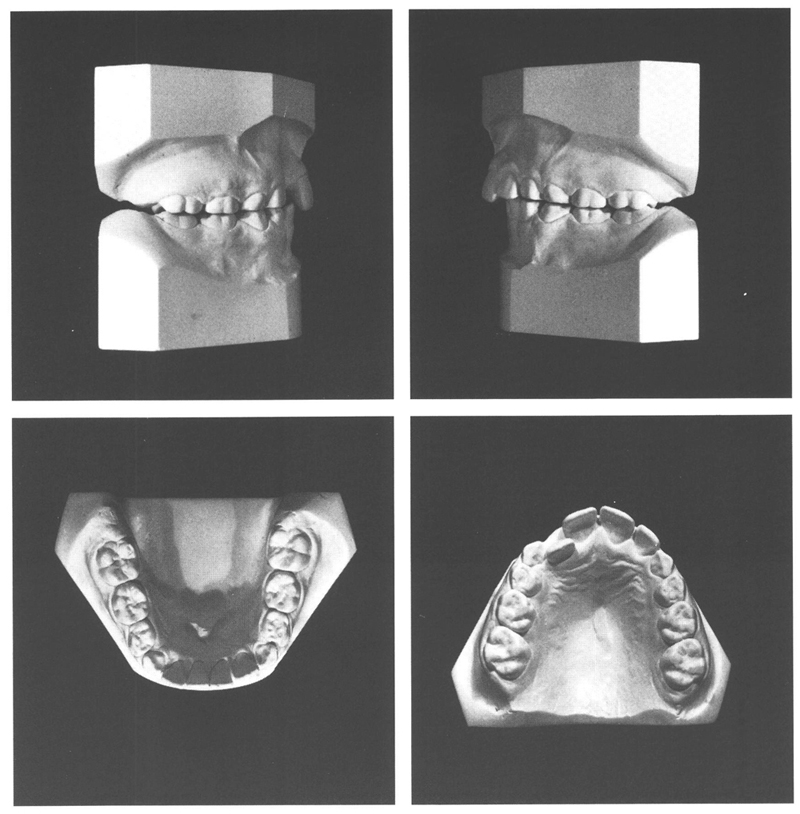 Figs 20-1 and 20-2 A girl aged 8 y, and 2 mo with a harmonious face, prominent cheek bones, a small nose, and well-positioned lips that are closed at rest. She has a class II/1 anomaly that is disguised by the presence of a ventral forced bite. She cannot close her teeth behind the maxillary right lateral incisor, which has emerged palatally. The maxillary teeth on the right are located more mesially than those on the left. The habitual occlusion (in forced bite) is 4mm ventral to the central relation. With maximal retroposition of the mandible, the incisal edges of the opposing right lateral incisors meet edge-to-edge. The dentition overall has adapted to the forced bite. The posterior teeth are in solid interdigitation and have normal inclinations.

It was decided to correct the ventral forced bite as soon as possible. To provide space for the labial movement of the maxillary right lateral incisor, the adjacent deciduous canine was extracted. The class II/1 anomaly would be corrected at a later stage. For that purpose a cervical headgear would be used, eventually combined with a maxillary removable plate and in the last phase with brackets on the four maxillary incisors. The patient was instructed to use a wooden tongue blade at least three times a day for five minutes each time to wedge the lateral incisor to labial (Fig 20.3). As soon as she could close her mandibular teeth behind the lateral, she should clench her teeth together in that position as much as possible. After two weeks, the reversed overbite had been corrected and the teeth adapted to their new habitual occlusion (Figs 20.4 and 20.5). 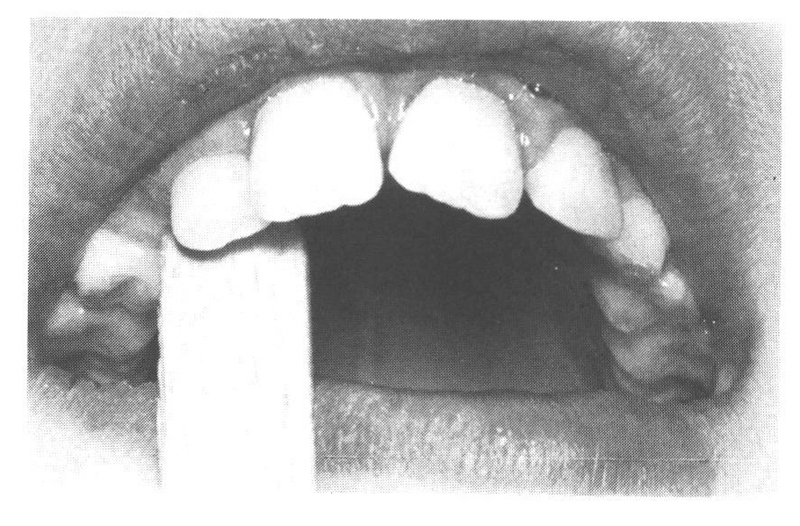 Fig 20-3 The reversed overbite of the maxillary right lateral incisor is being corrected with a wooden tongue blade, which has been made narrower to avoid it putting pressure on the adjoining teeth. The patient must put intermittent pressure to labial on the tooth concerned, using the mandibular incisors as a fulcrum. The blade should be held at a steep angle to enhance the labial acting force and reduce the force that would cause intrusion. The correction of the reversed overbite is only sensible if subsequently sufficient vertical overbite is present to maintain the improvement. When insufficient room is available for the tooth to be displaced labially, that room must be provided. In this case, the room was obtained by extracting the deciduous canine. 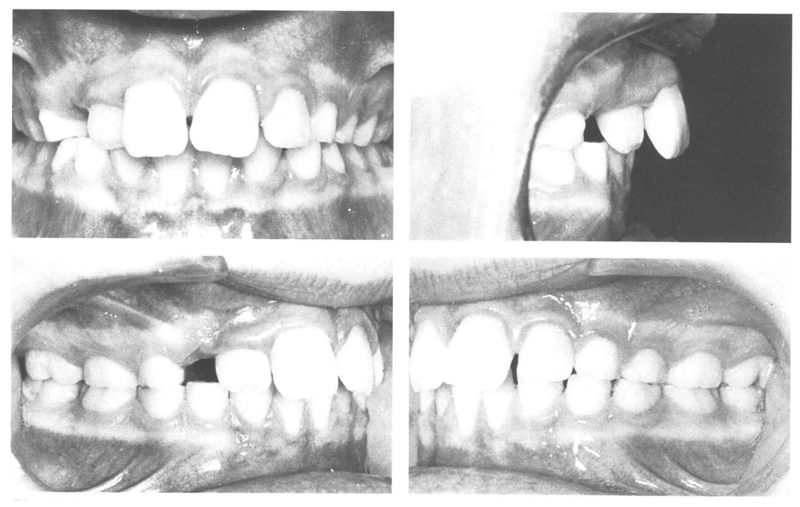 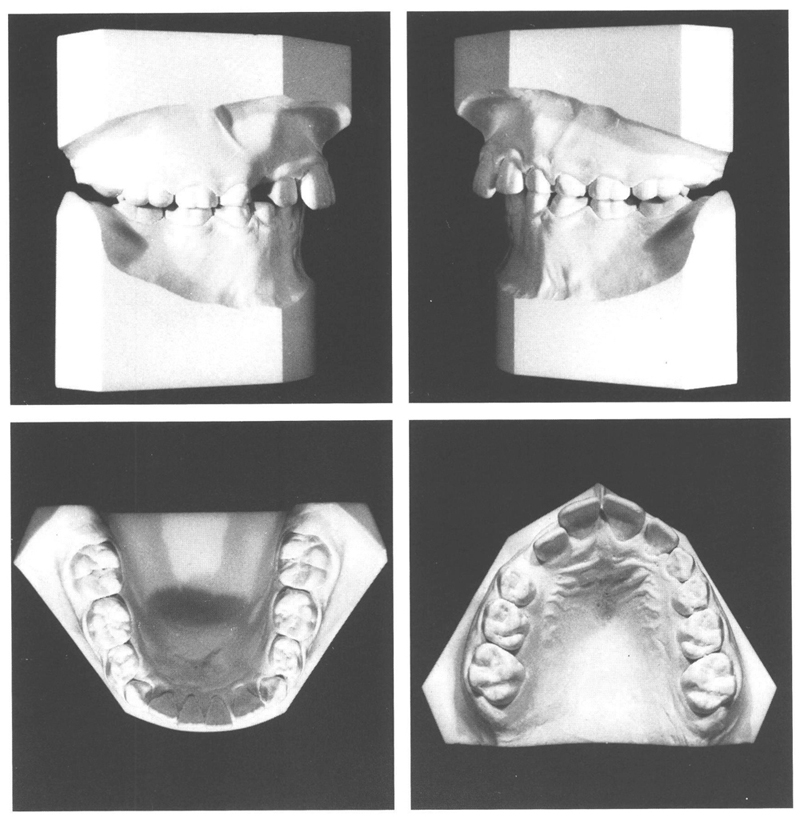 Figs 20-4 and 20-5 At the age of 8 y, 9 mo, six months after correction of the reversed overbite of the maxillary right lateral incisor, the habitual occlusion has adapted itself to correspond with the central relation. The overjet is now greater than it was when the forced bite was present. The more dorsal position of the mandibular dental arch is associated with an increase in the disto-occlusion. Due to the altered interdigitation, the inclination of the posterior teeth has changed. A result of the unilateral extraction of the deciduous canine on the right has been an increase in asymmetry in the maxillary arch. Now insufficient space is available for the maxillary permanent canine, which will emerge labial to the arch if nothing is done about it.

The treatment of the class II/1 anomaly was delayed until shortly before the end of the second transitional period because with mild disto-occlusions the headgear therapy can best be initiated while the maxillary second deciduous molars are still present and the second permanent molars not yet emerged. In this case, the headgear was placed at the age of 10 years and 2 months (Figs. 20.6 and 20.7). The aim was to use the cervical headgear to correct the disto-occlusion, to prevent the first permanent molars from migrating mesially, and to increase the dental arch perimeter to provide enough space for the maxillary permanent canines (Fig 20.18). There was no need to use a maxilla/>