Except for the disto-relation, his face was harmonious in form. Despite having a clear nasal airway he held his mouth open. Consequently his lower lip lay against the incisal edges of the maxillary anteriors, which were positioned too far to labial. He had sucked his thumb until the age of eight years. There was adequate space in the mandibular and the maxillary dental arches (ALD +1 and +2 mm, respectively) and the overjet was 6 mm. The mandibular incisors contacted the palatal mucosa. The mandibular dental arch was narrow; in the maxilla both first premolars and the left second premolar were in scissorbite (Figs 19.1 and 19.2). 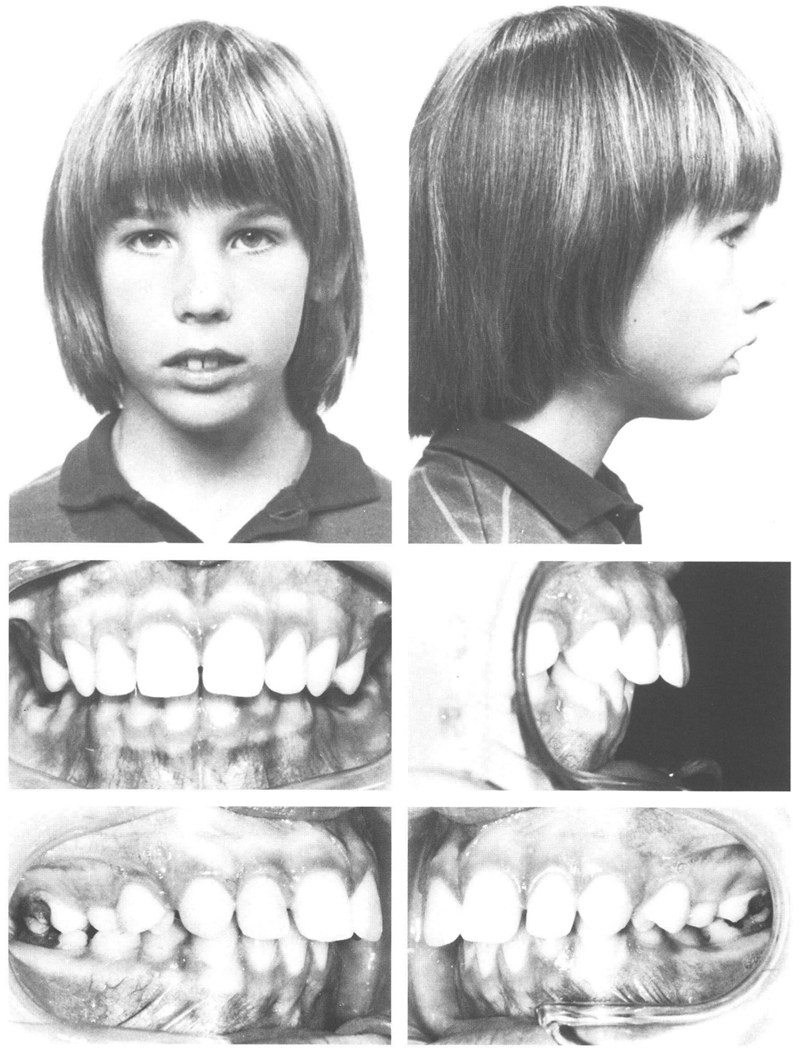 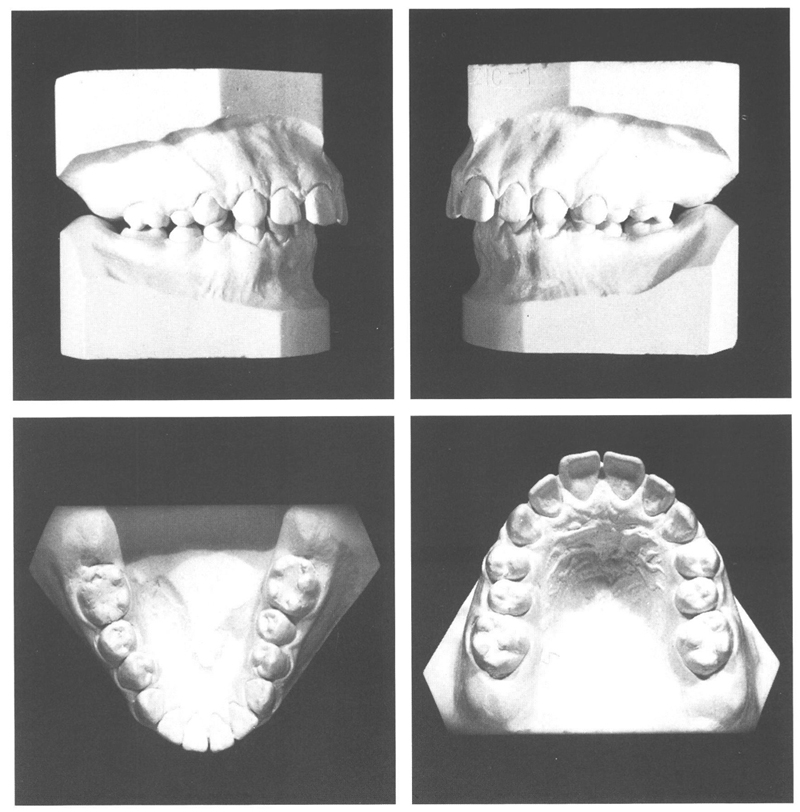 Figs 19-1 and 19-2 A boy aged 11 y, 7 mo with a disto-relation. The lower lip lies against the incisal edge of the maxillary incisors. The upper lip is short, the lower lip curled over. There are no other functional aberrations. The disto-occlusion is of ½ PW. The maxillary anteriors are mildly labioverted, with spacing between them all. All maxillary premolars, except the second on the right, are in scissorbite and are tipped to buccal; their antagonists are tipped lingually. The second permanent molars have not yet emerged. The room available for them seems adequate as can be estimated in the maxilla from the distances from the distal surfaces of the first molars to the dorsal margins of the maxillary tuberosities.

It was decided to correct the disto-relation with a cervical headgear and to use a removable maxillary plate and a mandibular lingual arch to eliminate the scissorbite. A partial fixed appliance on the maxillary incisors would be used later as required if their correction were needed.

The cervical headgear was fitted at the age of 11 years, 9 months. Two months later the lingual arch and the plate were provided. The lingual arch was furnished with auxiliary springs to move the mandibular left first and second premolars and the right first premolar to buccal. The maxillary plate was provided with an anterior biteplane and springs that ran to buccal across the embrasures mesial to the first permanent molars, placing pressure on the buccal surfaces of the right first premolar and both the premolars on the left. On the left the spring was bent backward parallel to itself from the level of the mesial of the first premolar. Only the recursive portion of the horizontal loop was in contact with both the premolars. In this manner, it was possible to obtain a flexible spring that applied a gentle force to the premolars. Of course, the margin of the plate was trimmed away palatally where necessary to permit the teeth to move palatally. The biteplane was of such a thickness that the transverse movement of the premolars was not impeded by their antagonists.

After correction of the scissorbite, the biteplane was reduced in thickness to permit the cone-funnel mechanism to operate. Divided labial arches were added emerging distally to the canines and were used to retract the maxillary incisors and close the diastemata.

One year after the commencement of treatment, the disto-occlusion was largely eliminated and the remaining corrections had almost been achieved. The maxillary incisors were in good alignment but were tipped back too much and had developed supraposition. At the age of 13 years 0 months, brackets were placed on the incisors to torque and intrude them,and consecutively a twistflex .0175” archwire and then a solid one of .019” × .026” were used for their correction. To support the torquing and intrusive action of the appliance, the headgear was replaced by one with a Kahn spur, which applied an upward force to the archwire between the brackets on the central incisors.

By the age of 14 years, 0 months, an acceptable result had been obtained and all appliances were removed, although there still were central diastemata in both dental arches and the maxillary left first molar was in buccoposition while the mandibular one was in linguoposition (Figs 19.3 and 19.4). Two years later, these diastemata had closed and the maxillary central incisors had moved forward a little. However, now slight spacing existed distal to the central incisors in the maxillary arch. In addition, the position of both maxillary and mandibular left first molars had improved and a good occlusion had developed between them (Figs 19.5 and 19.6). 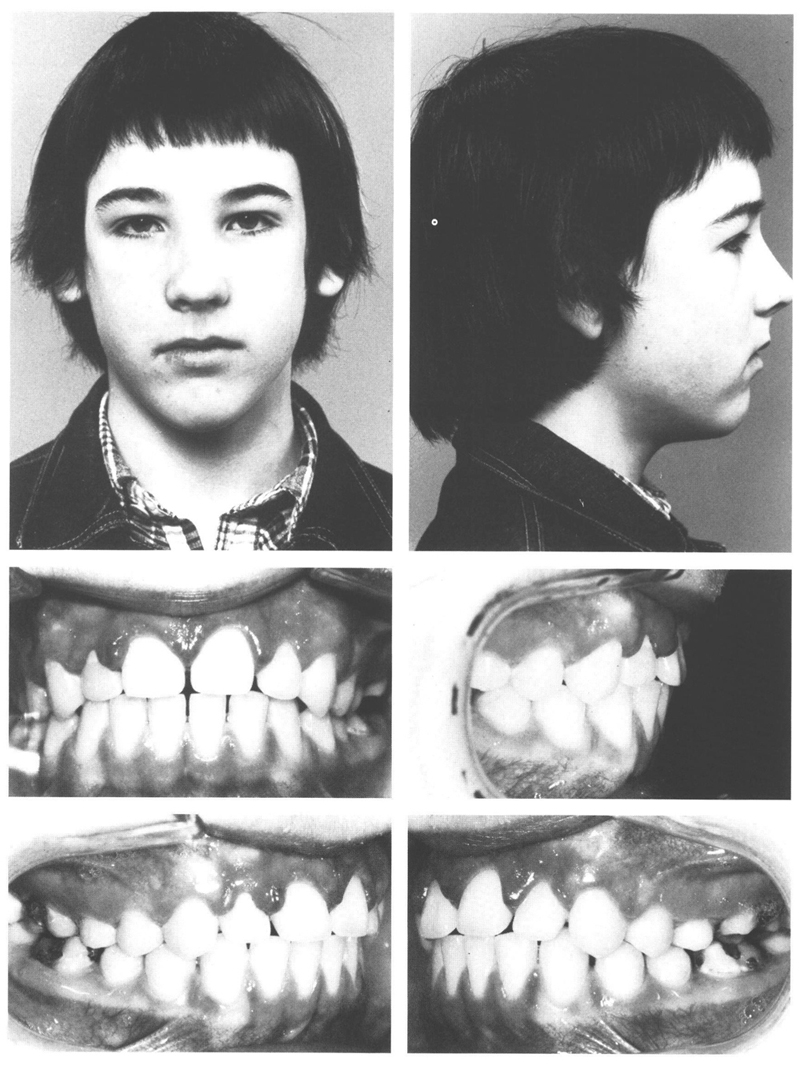 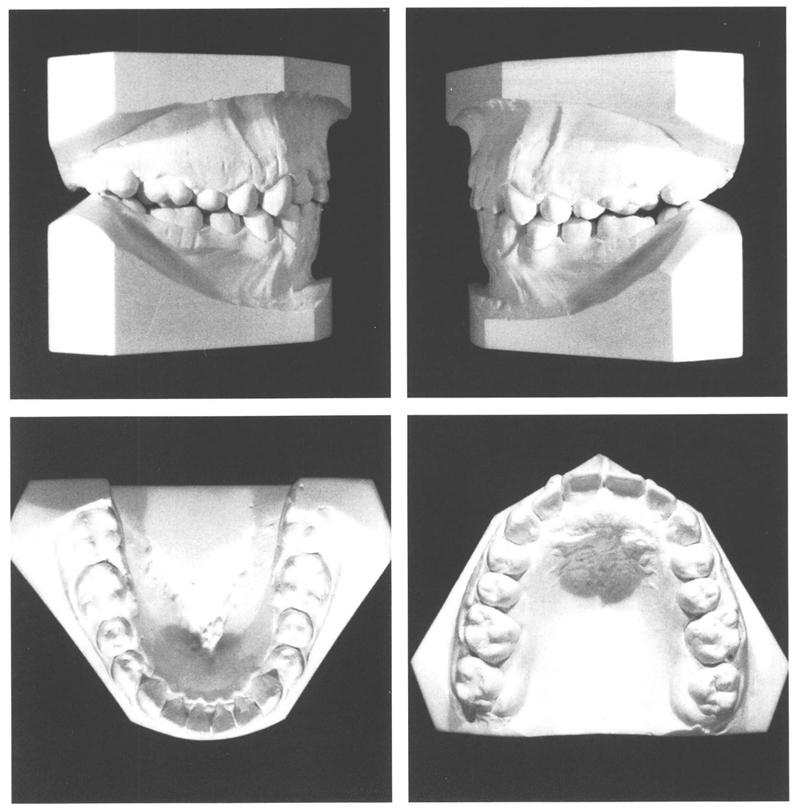 Figs 19-3 and 19-4 At the age of 14 y, 10 mo, the treatment that had lasted 3½ years was concluded. The scissorbites had been eliminated, principally by increasing the breadth of the mandibular dental arch in the premolar regions. The maxillary incisors have been intruded and are positioned more to cranial than the canines. The first permanent molars do not occlude fully. In addition, the maxillary left first permanent molar is in buccoposition while the mandibular left first molar is in endoposition, something that is attributable to the use of the cervical headgear with a Kahn spur. 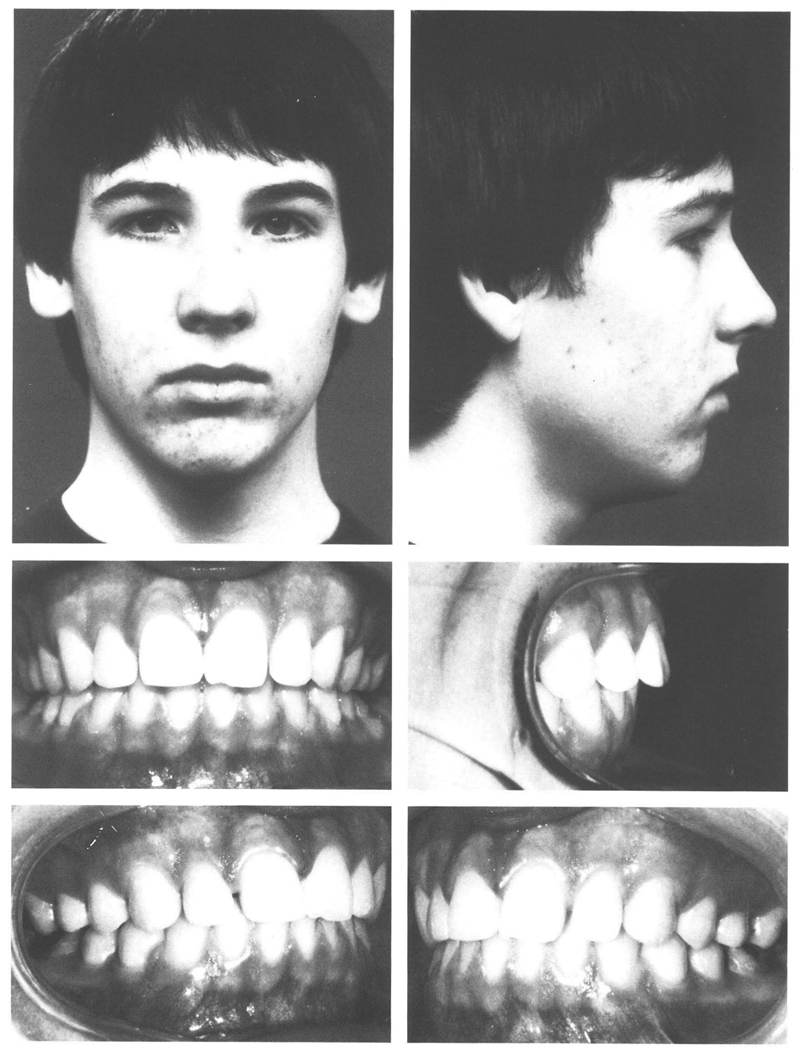 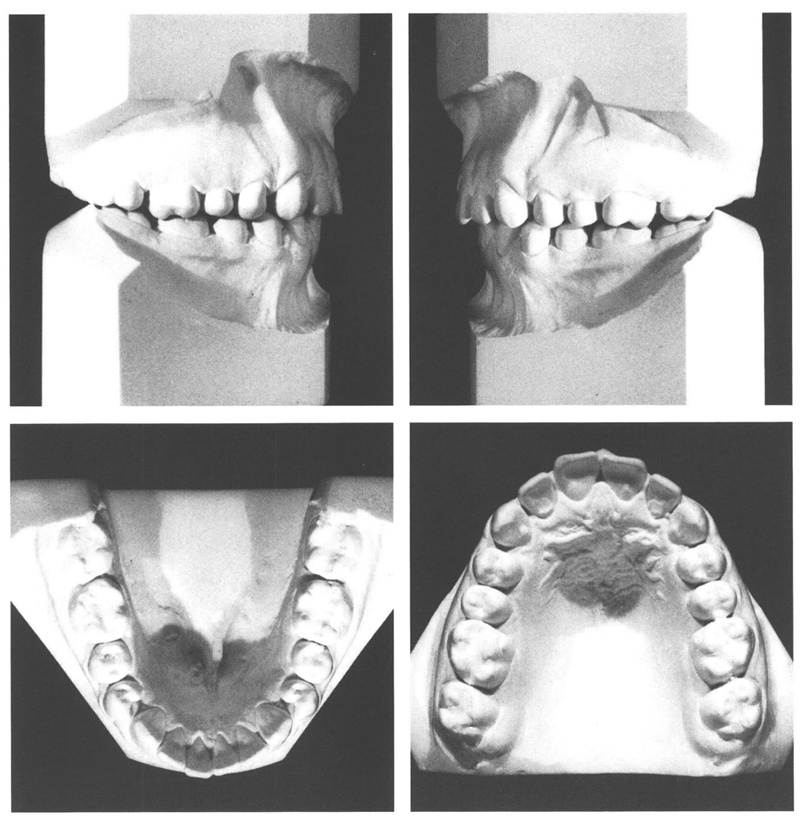 Figs 19-5 and 19-6 At the age of 16 y, 1 mo, two years after treatment was terminated, lip closure is normal. The upper lip is short. That being so, generally the maxillary incisors have to be intruded to achieve a good relationship between those teeth and stomion. The vertical angulation of the maxillary canines is not at all disturbing, particulary not after selective grinding of thei/>