A boy aged 14 years, 7 months exhibited a class II/1 subdivision anomaly with neutro-occlusion on the right and a disto-occlusion of ½ PW (premolar width) on the left. The tongue at rest lay between the lingual cusps of the maxillary and mandibular molars on the left side. There were no other abnormal functional conditions. There was excess space in the maxillary arch (ALD: + 3 mm). The maxillary first permanent molars had abnormal crown forms and did not occlude well. Indeed, the maxillary first permanent molar on the left was in endo-occlusion and the mandibular first and second molars on that side were rotated. The middle of the dental arch in the maxilla was displaced to the right with respect to that of the mandible. Because of the narrowness of the maxillary lateral incisors a tooth-size discrepancy (TSD) of 1.5mm existed (Figs 17.1 and 17.2). 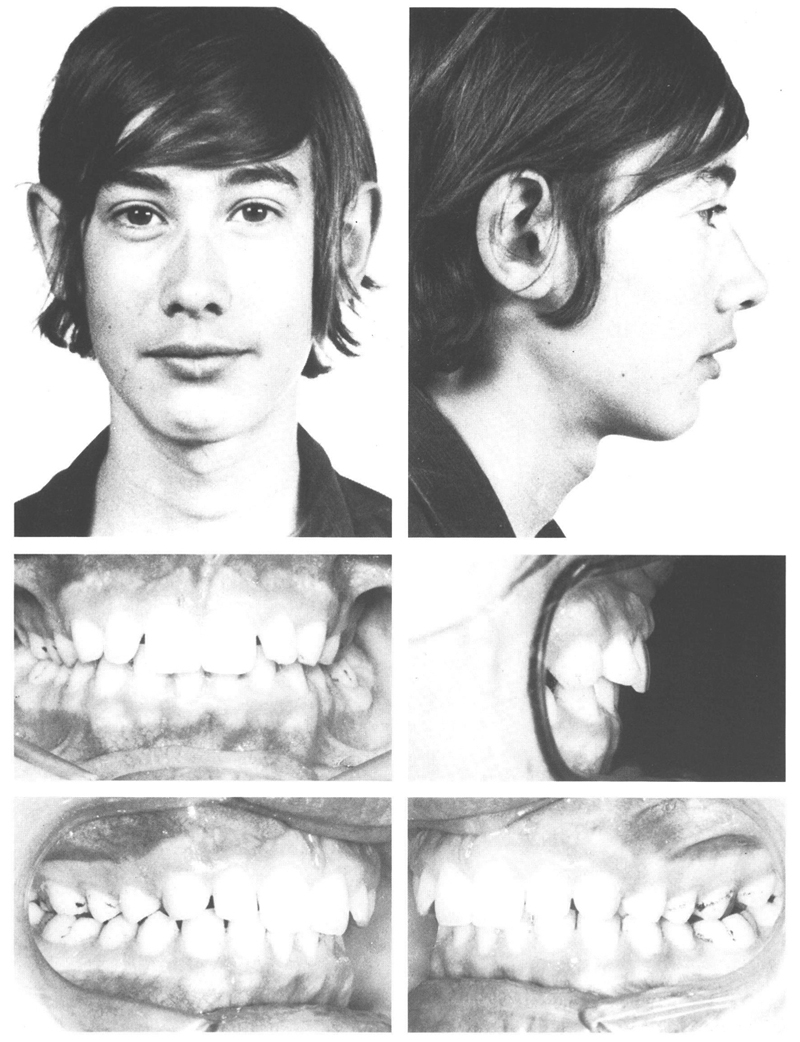 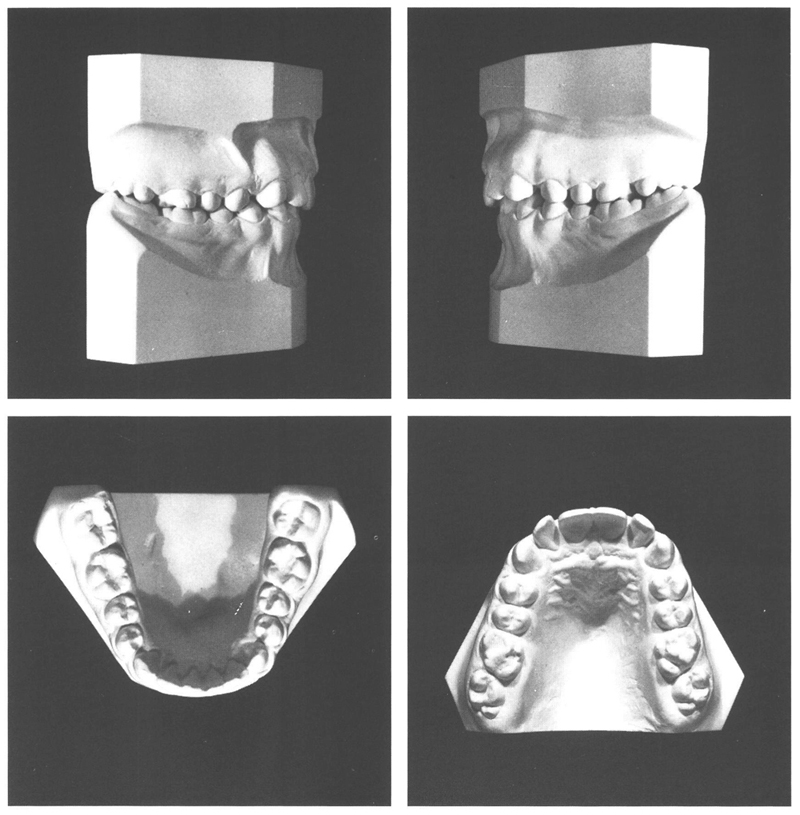 Fig 17-1 and 17-2 A boy of 14 y, 7 mo with class II/1-subdivision anomaly. The face is well-formed. The mandibular left first and second molars are rotated. There is an anterior TSD, with narrow maxillary lateral incisors, that are in labioversion. The maxillary first permanent molars have abnormal crown forms. The buccal surface runs at an angle toward the distopalatal from the mesiobuccal cusp. The crown is more triangular than rhomboid, especially on the left. That tooth is rotated and is in endo-occlusion. Its antagonist is rotated in the dental arch. In the intraoral photographs, the molars on the left can be seen not to occlude well; there is no solid interdigitation. The same applies to the first molars on the right. Furthermore, all the teeth in the posterior segments have shallow cusp heights.

Because of the age of the patient, it was decided to commence treatment immediately and to fit an asymmetric cervical headgear. It was not considered sensible to correct the position of the maxillary left first molar since it was probable that such a correction would relapse as a consequence of the tongue interposition and the somewhat triangular form of the crown. Consideration of course had to be given to the possible development by the asymmetric headgear of a force to palatal on the left molar, which might cause that molar to move still further inward. Following achievement of neutro-occlusion on the left side, brackets were to be placed on the maxillary incisors to close the diastemata and to correct other irregularities.

At the age of 14 years, 8 months, a cervical headgear was fitted that had the right hand outer leg shortened and the one on the left bent outward. After nine months, both the disto-occlusion on the left side and the discrepancy between the arch midlines had been eliminated. Consequently the asymmetric headgear was replaced with a normal one. Two months later, brackets were placed on the maxillary incisors and a .0175” twistflex arch was fitted. This was replaced after some time with a solid .019” × .026” archwire. Four months later, the required corrections of the maxillary anteriors had been obtained so that the brackets could be taken off and a removable maxillary retainer provided. The maxillary first permanent molar on the left was still in endo-occlusion and the maxillary right second premolar was a little too far to palatal. The positions of these teeth were corrected with springs on the retainer. The plate was worn for eight months continuously and then for two more months only at night.

By the age of 16 years 10 months, a satisfactory result had been achieved with good dental arches that fit together well. In view of the limited cusp height, it was not clear if a solid interdigitation would develop. The maxillary left first permanent molar now stood in the line of the arch and occluded with its antagonist, which had rotated back a little (Figs 17.3 and 17.4). 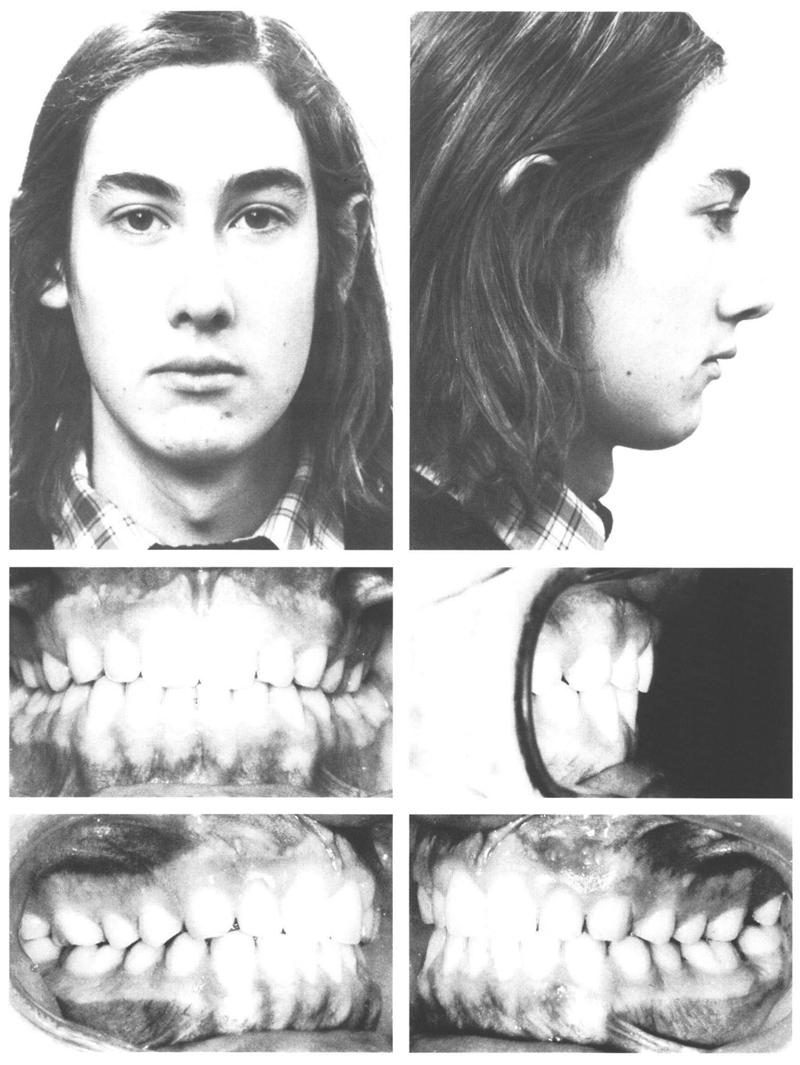 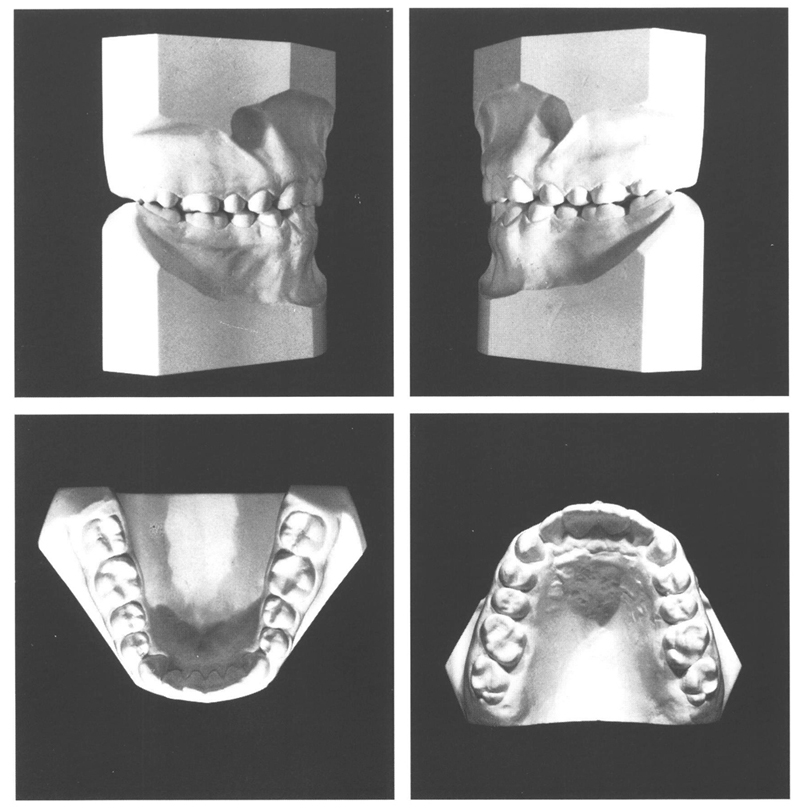 Figs 17-3 and 17-4 At the age of 16 y, 10 mo after active treatment for 16 months and a period of 10 months retention, the dentition is fine. Both dental arches and their midlines match well. No definite interdigitation has developed because of shallow cusp heights. This has been exaccerbated on the left by tongue interposition. In the mandibular anteriors, the distal surface of the right central incisor has gone a little to lingual. The posterior section of the apical area in the maxilla is small and it is not certain if sufficient room will become available for the third molars.

In the next five years, the face developed further, particularly vertically, and the mandible attained a somewhat more ventral position with respect to the maxilla. At the age of 21 years, 3 months, the crown of the mandibular right third molar had fully emerged; those of the other three were partly through. The maxillary left first permanent molar had moved palatally and once more was in endo-occlusion.

Tertiary crowding had developed in the mandibular anteriors while in the maxilla the lateral incisors had gone slightly to labial (Figs 17.5 and 17.6)./>