A boy aged 13 years, 0 months displayed a class II/1 anomaly with deviant buccolingual occlusion and a high gum-line. He had been treated for six years with a removable maxillary plate incorporating a continuous labial arch and an expansion screw. By turning the screw, the maxillary arch was widened and at the same time the incisors were retracted. Nothing had been done during this time to correct the anomalous sagittal jaw relationship, with the result that the maxillary dental arch was now too broad in relationship to the mandibular dental arch. The boy often held his jaw in a more ventral position in which the arches matched better (“Sunday bite”). The anterior open bite probably was due to the use of the plate. There was inadequate room in the fourth quadrant to accommodate the second premolar. It was likely that no consideration had been given to that situation in the previous treatment (Figs 16.1 and 16.2). 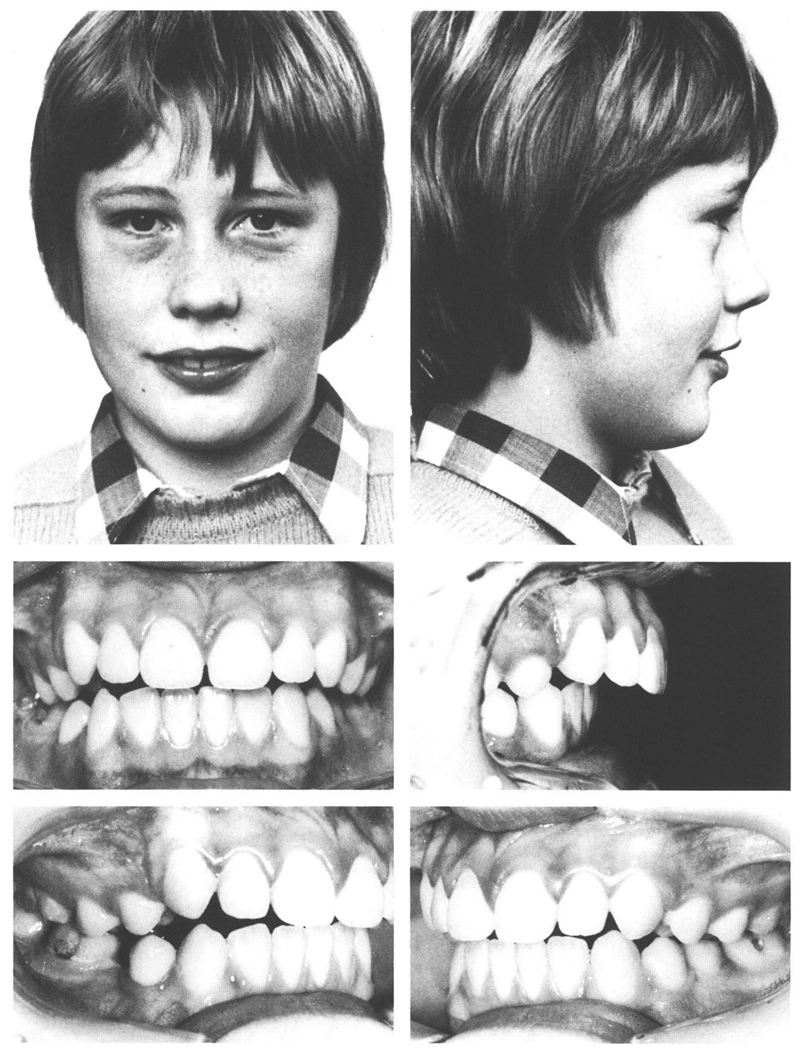 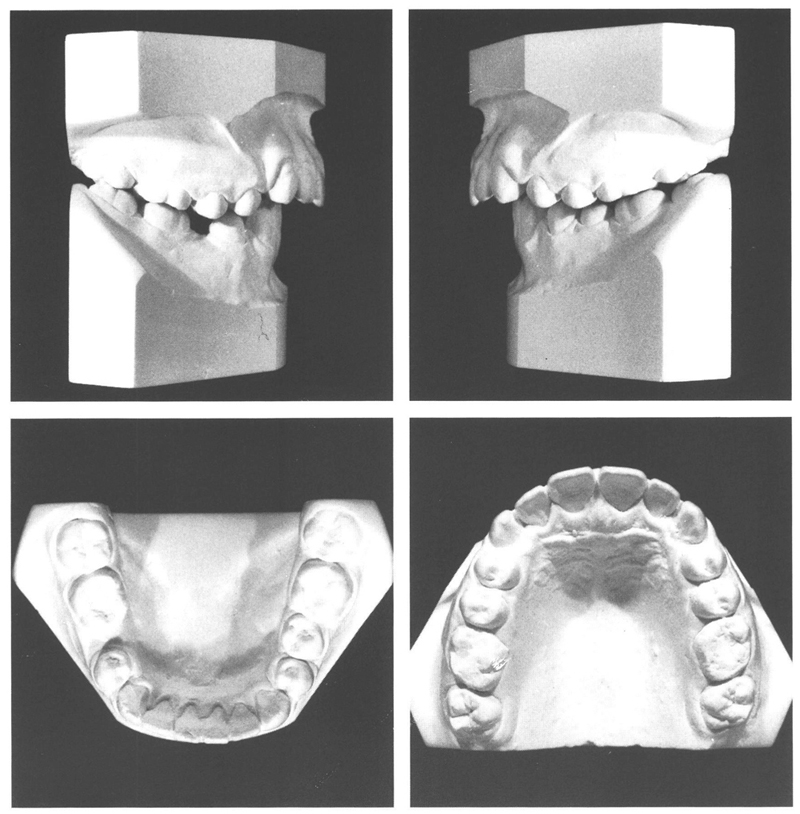 Figs 16-1 and 16-2 A boy of 13 y, 0 mo who already had been under treatment for six years with a removable maxillary expansion plate. He deliberately held his mandible forward as the dental arches then fitted together better and his appearance was improved (“Sunday bite”). Only the lateral oral view of the incisors and the oblique photographs in Figure 16-10 were obtained with the mandible in central relationship and display the sagittal overbite of 12 mm. The oral photographs as well as the facial ones were otherwise obtained with the jaw in the “Sunday bite” posture. The dental casts show how the maxillary arch is excessively broad. The maxillary premolars are outside those of the mandibular arch. There is insufficient room for the mandibular right second premolar.

It was decided still to attempt to correct the sagittal jaw relationship using extra-oral traction. A cervical headgear was fitted at the age of 13 years, 2 months to be worn 16 hours per day to obtain the desired facial-orthopedic effect. After 7 months, brackets (.022” × .028”) were placed on the four maxillary incisors and a .019” × .026” archwire was fitted to torque, retract, and intrude those incisors. At the age of 14 years, 8 months after a treatment time of 18 months, all appliances were removed. Retention was not thought to be necessary since a solid interdigitation of the posterior teeth had been established and no extreme malposition of teeth had existed originally. During treatment, the face and particularly the mandible experienced a marked adolescent growth spurt, giving rise to rapid improvement. Central relationship and habitual occlusion now corresponded. The anterior open bite had more or less gone, although the occlusion and alignment of the teeth still showed some shortcomings. The same could be said about the standard of oral hygiene (Figs 16.3 and 16.4). 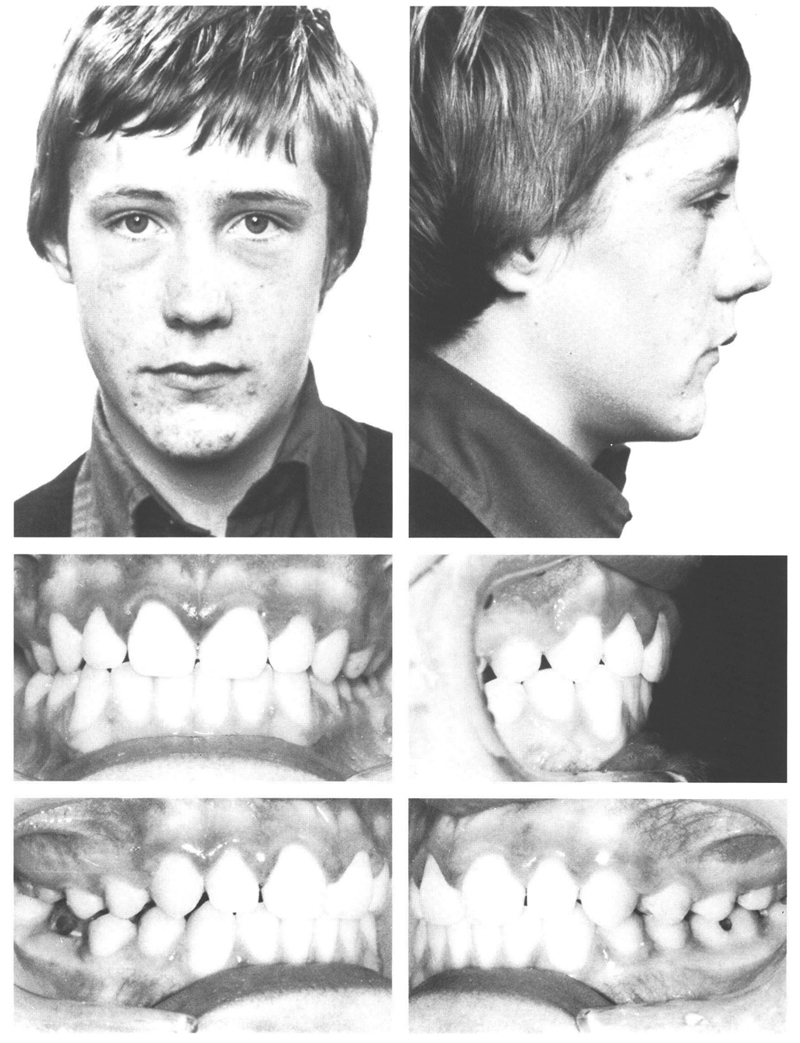 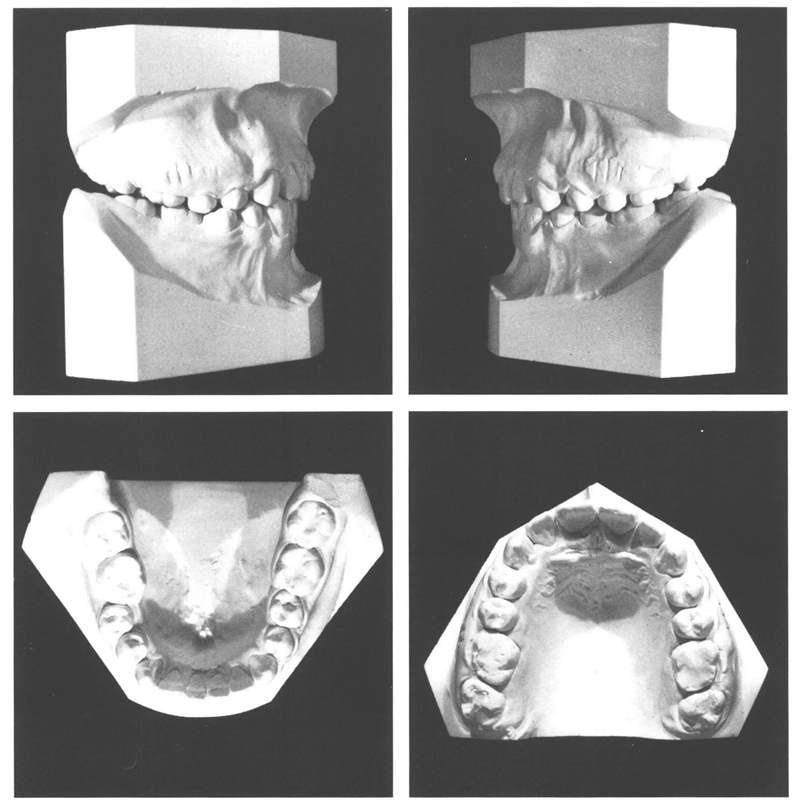 Figs 16-3 and 16-4 At the age of 14 y, 8 mo the central and habitual occlusions correspond. The mandible has developed remarkably to ventral. There is now a good occlusion in sagittal and transverse directions with solid interdigitation of canines and premolars. The maxillary incisors are too steeply inclined. The mandibular right second premolar has emerged in the interim and in so doing has displaced the first permanent molar somewhat to lingual. The mandibular right second premolar is in exo-occlusion.

Five years later, the face had grown further. The mandible had come still farther ventrally with the mandibular arch occluding a little more mesially as a result. The maxillary incisors were a little less steeply inclined but there was now a central diastema, which the patient did not like. It was decided to wait and see if spontaneous closure would occur. Tertiary crowding had developed in the anterior mandibular region (Figs 16.5 and 16.6).