A boy aged 8 years, 0 months with a normal facial configuration for that age even if his chin was receding, exhibited a class II/1 subdivision anomaly. He had a competent lip seal and functionally all was normal; however, his lower lip covered approximately half of the labial surfaces of the maxillary incisors. The maxillary incisors were steeply inclined; the bite was deep and the overjet was 4 mm. Mandibular deciduous molars had been lost early. Three premolars had already emerged. The arch length discrepancy in the maxilla was +2 mm and in the mandible -1 mm (Figs 15.1 and 15.2). 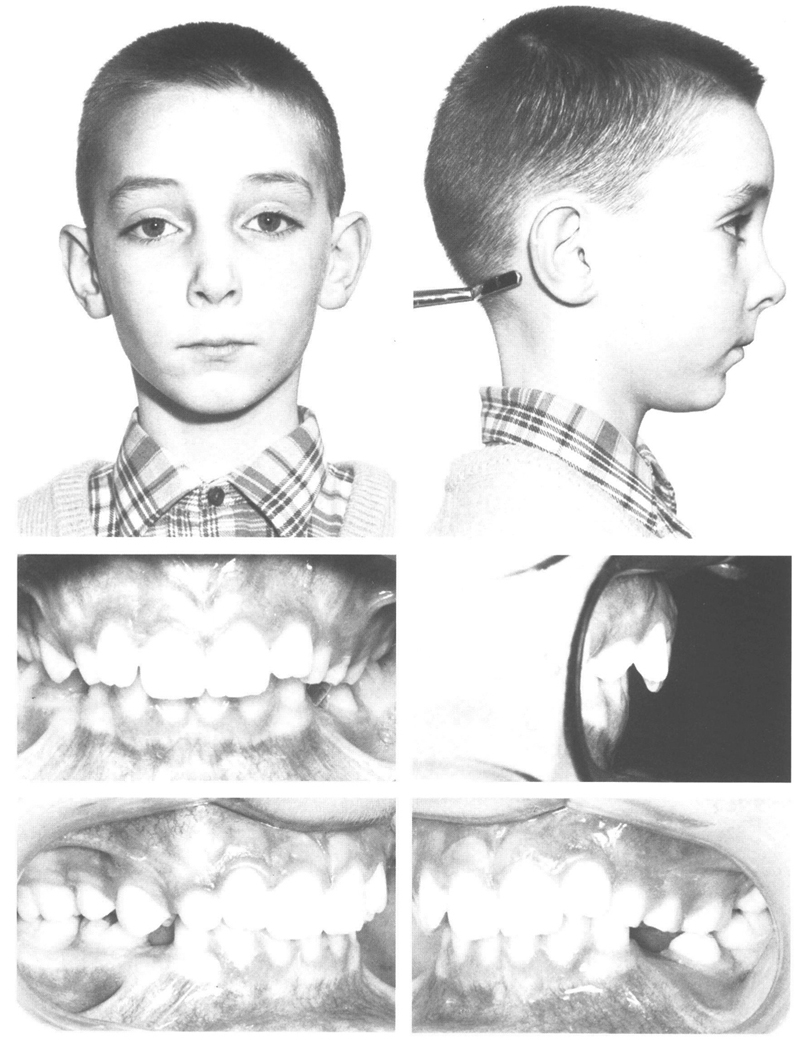 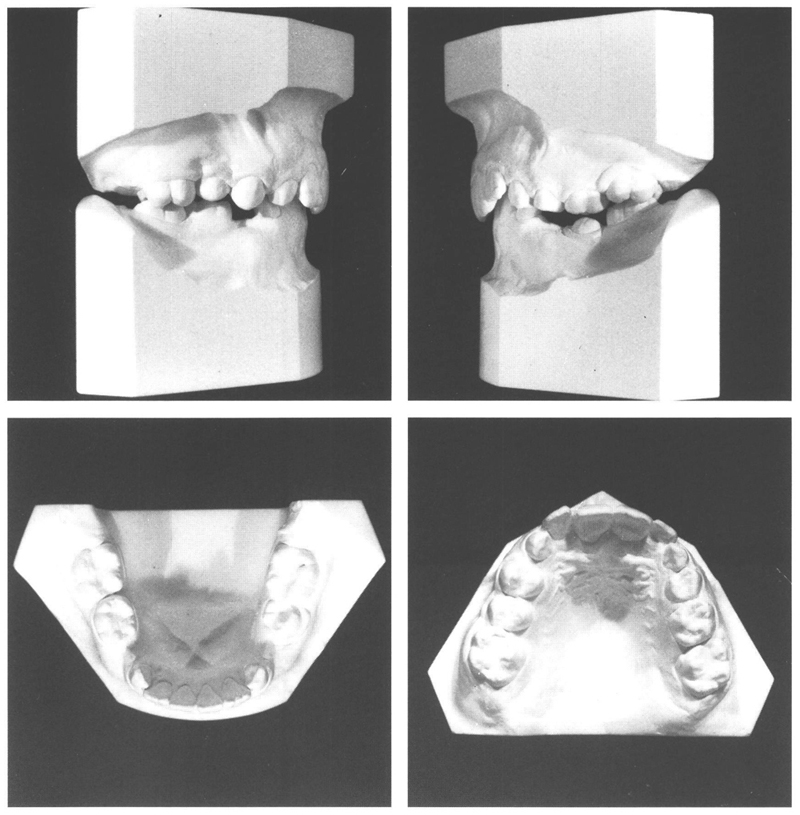 Figs 15-1 and 15-2 A boy of 8 y, 0 mo with class II/1 subdivision (disto-occlusion R: 1 PW, L: ½ PW); a deviation of the dental arch midlines; and steep inclination of the maxillary central incisors, which have half their labial surfaces covered by the lower lip. Both dental arches are of normal form. Deciduous molars have been lost in the mandible. Three premolars have already emerged, which is very early.

It was decided to await further development of the dentition and at a later stage to undertake treatment with a cervical headgear, supplemented later on with partial fixed appliance on the maxillary incisors. Six months later, the maxillary lateral incisors were inclined similarly to the central incisors and were in the arch alongside them. A year after that, the maxillary left lateral incisor had moved more palatally under the influence of the canine erupting adjacent to it. The maxillary permanent canines and first premolars had emerged (Fig 15.3). It was decided to slice the mesial of the mandibular right second deciduous molar and to anticipate development of the dentition, taking into consideration the fact that the level of cooperation in treatment would as yet not be adequate. 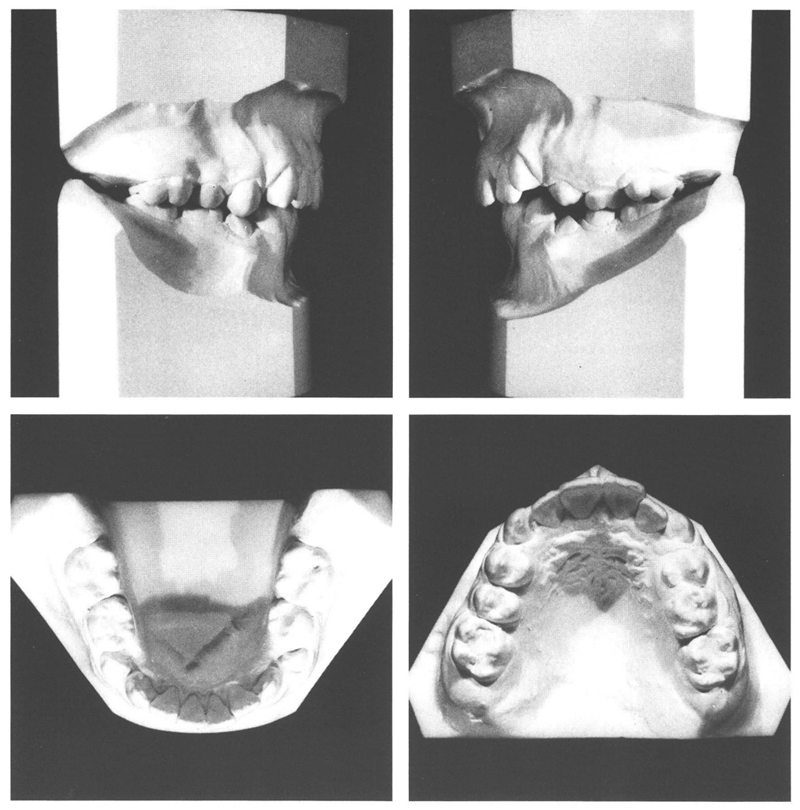 Active treatment was started at the age of 10 years 10 months, by fitting a cervical headgear (Fig 15.4). This appliance was not worn enough and every four or five months had to be replaced due to fractures. After six months, the headgear was made asymmetric to procure a greater effect on the right side. The outer arm on the left side was shortened for that purpose, so that the loop to which the elastic neckstrap was hooked lay at the level of the molar tube. The outer bow on the right had its leg bent slightly outward (see Fig 24.7). Both modifications lead to more traction being applied to the first permanent molar on the right than on the left. The right molar does indeed suffer loading to palatal at the same time, and this cannot just be countered by making the inner arch wider without there being other effects on the dental arch.26 After some time, the headgear was left out for two months to give the right first molar, which had displaced palatally as described, the opportunity to return to the buccal. This applied also to its antagonist, which had been moved lingually by occlusal interaction. The development of the mandibular arch was so favorable that treatment of it was considered unnecessary. 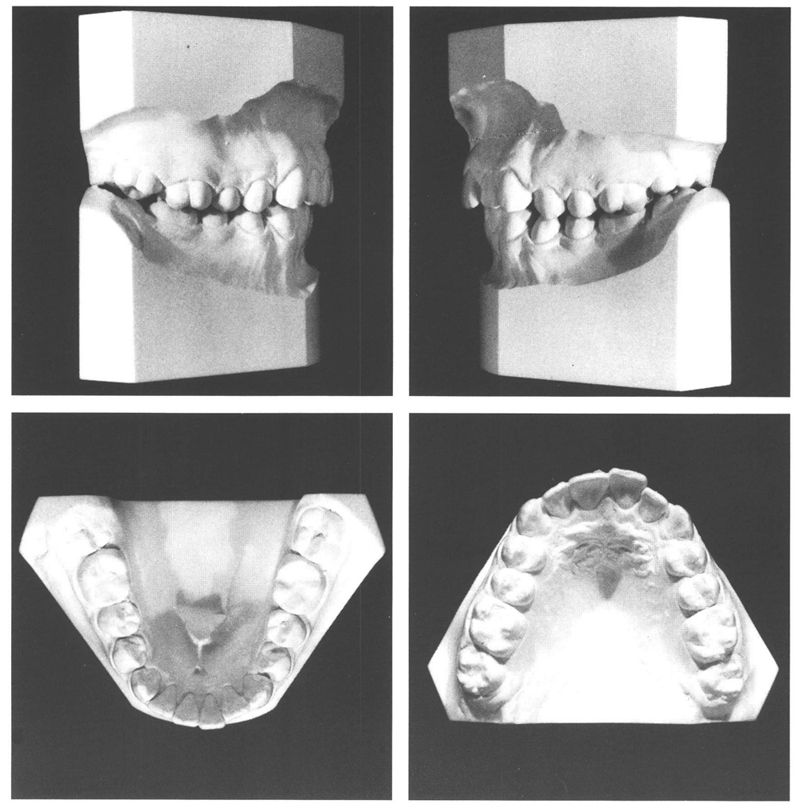 Fig 15-4 At the age of 10 y, 10 mo active treatment was begun. All permanent teeth except for the third molars had emerged. In the mandible more or less sufficient room developed for the premolars without the crowding increasing in the anterior region. The development in the maxillary arch has also been favorable where more space has become available for the right canine.

By the age of 13 years 0 months, the occlusion was slightly over-corrected on both sides. Then brackets (.022” × .028”) were placed on the four maxillary incisors, and first a .0175” twistflex archwire followed by a .019” × .026” rectangular solid one, was inserted. It was no longer necessary to wear the headgear. Four months later, the appliances were removed and a maxillary removable plate provided for retention. That appliance was worn day and night for three months, then nights only for three months, gradually />