A girl aged 10 years, 8 months presented with a well-formed face with a slightly receding chin, an exaggerated plica mentalis, and normal function. She had a class II/1 anomaly (¾ PW disto-occlusion) with crowding in the mandibular and maxillary anterior regions. The four second deciduous molars present were the last remaining of her deciduous teeth; as usual they had greater mesiodistal dimensions that their successors, especially in the mandible. Their broad crowns offered a possibility for correction of the anterior crowding. Estimation of the ALD indicated discrepancies of +2 mm in the mandible and -2 mm in the maxilla. Considering the degree of disto-occlusion, the overjet of 5 mm was small; this aspect could be attributed to the crowding in the anterior region combined with a lack of labio-version of the maxillary incisors (Figs 14.1 and 14.2). 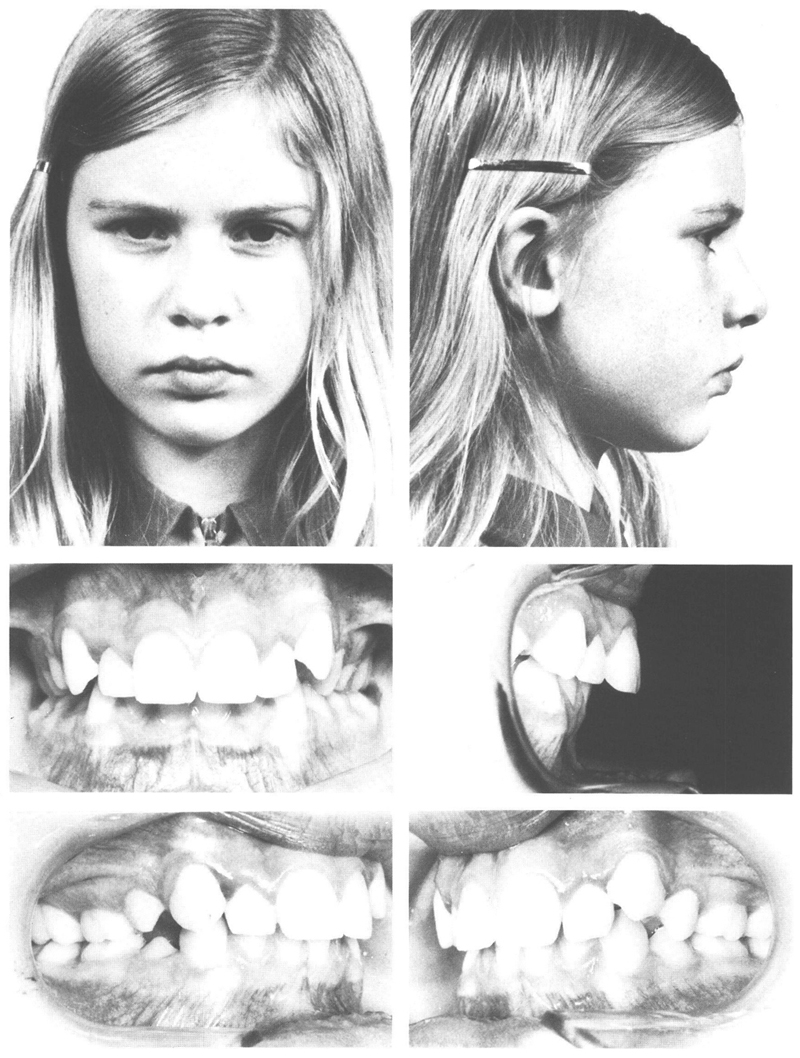 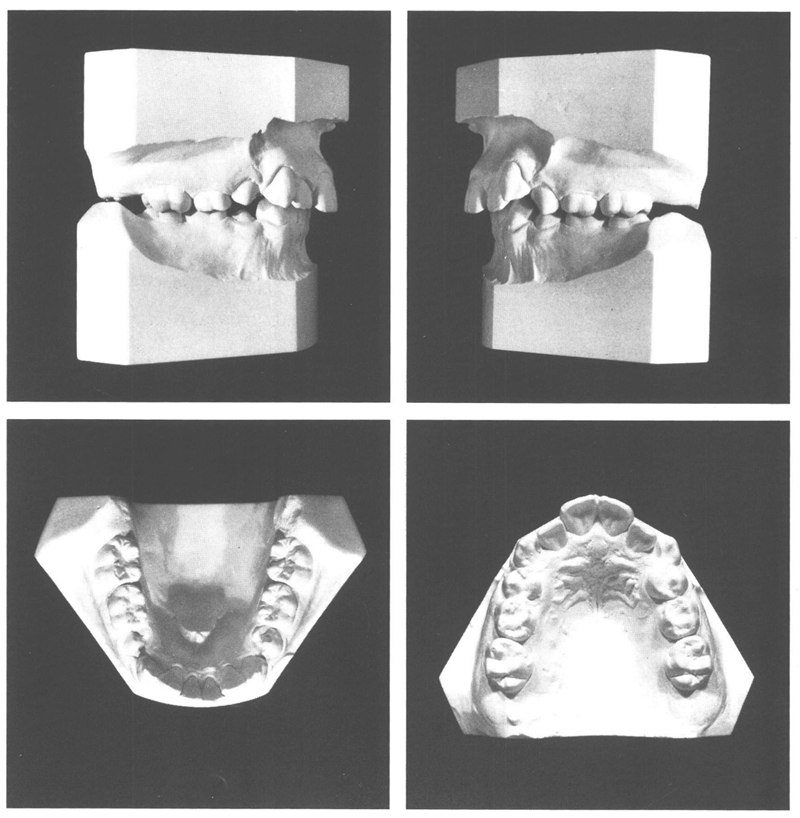 Figs 14-1 and 14-2 A girl of 10 y, 8 mo with a class II/1 anomaly (¾ PW disto-occlusion), a receding chin and a competent lip seal. A short time previously the maxillary first premolars and the maxillary canines had emerged. All second deciduous molars are still present. In both jaws, the lateral incisors are located a little too far lingually; the central incisors have normal inclinations.

The treatment plan was to use a cervical headgear and later to use a partial fixed appliance on the maxillary arch. It was assumed that mesial slicing of the mandibular second deciduous molars would be sufficient to deal with the mandibular arch. The cervical headgear was fitted at the age of 10 years, 9 months. At the same visit, the mesial convexity of the second deciduous molars in the mandibular and maxillary arches was ground away (Fig 14.19). With headgear therapy and mesial slicing, the maxillary first premolars migrated distally and room became available for the permanent canines. Simultaneously with the reduction of the disto-occlusion, the width of the maxillary arch increased mainly due to the action of the rail mechanism. The result of the changes was the appearance of diastemata in the maxillary anterior region. In the mandible, the first premolars also drifted distally until they contacted the now flat mesial surfaces of the deciduous second molars which, after the slicing, were about the same crown width as their successors. As a result, the mandibular canines could move distally, enabling the lateral incisors to come properly into the dental arch under the influence of tongue pressure.

At the age of 12 years, 10 months, edgewise brackets (.022” × .028” slots) were placed on the four maxillary incisors and a .0175” twistflex archwire was fitted (Figs 14.13 to 14.18). Two months later, this arch wire was replaced with a solid rectangular .019” × .026” stainless steel arch to retract the maxillary incisors and at the same time keep their axial inclinations under control. For that purpose the archwire had torque installed and stops were soldered to it 4 mm in front of molar tubes. Before soldering on the stops, a section of open coil spring (.010” × .030”) 6mm long was placed on each side of the archwire. Those springs sufficed to place a slight distal force on the maxillary incisors. They were activated by tying thin soft stainless steel ligatures (.010”) from the distal of the molar tubes to two turns round the archwire in front of the anterior end of the coil springs, which compressed the coils when the ligature was shortened.

In this situation continuing, use of the headgear is imperative because otherwise the space will close from the distal. At subsequent visits, the retraction of the maxillary incisors was reactivated by compressing the coils that had opened up, until they were almost closed again. This action was repeated until all spaces had closed. Then the coil springs were removed and the archwire tied firmly back to the molar tubes with a ligature to the stops themselves, to keep the diastemata closed. In addition, a light intrusive force was applied to the incisors by the archwire. By allowing the wire to rest against the buccal surfaces of the canines, those teeth were nudged a little to palatal.

When all the anticipated changes had been realized, the headgear, which had been worn 14 hours per day, was not used. The fixed appliance was left in place another four months to consolidate the improvements that had been attained in the maxillary arch. A specific retainer was not considered to be required. Treatment was concluded at the age of 13 years, 0 months. The profile was harmonious and the dental arches were well-formed. They occluded optimally with a solid interdigitation of the canines and premolars. Only the position of the second permanent molars left something to be desired. In the maxilla these were too far to buccal. In the mandible the right second permanent molar was tipped too far to lingual and was rotated (Figs 14.3 and 14.4). These anomalous positions of second molars are symptoms of crowding in the posterior sections of the apical areas. 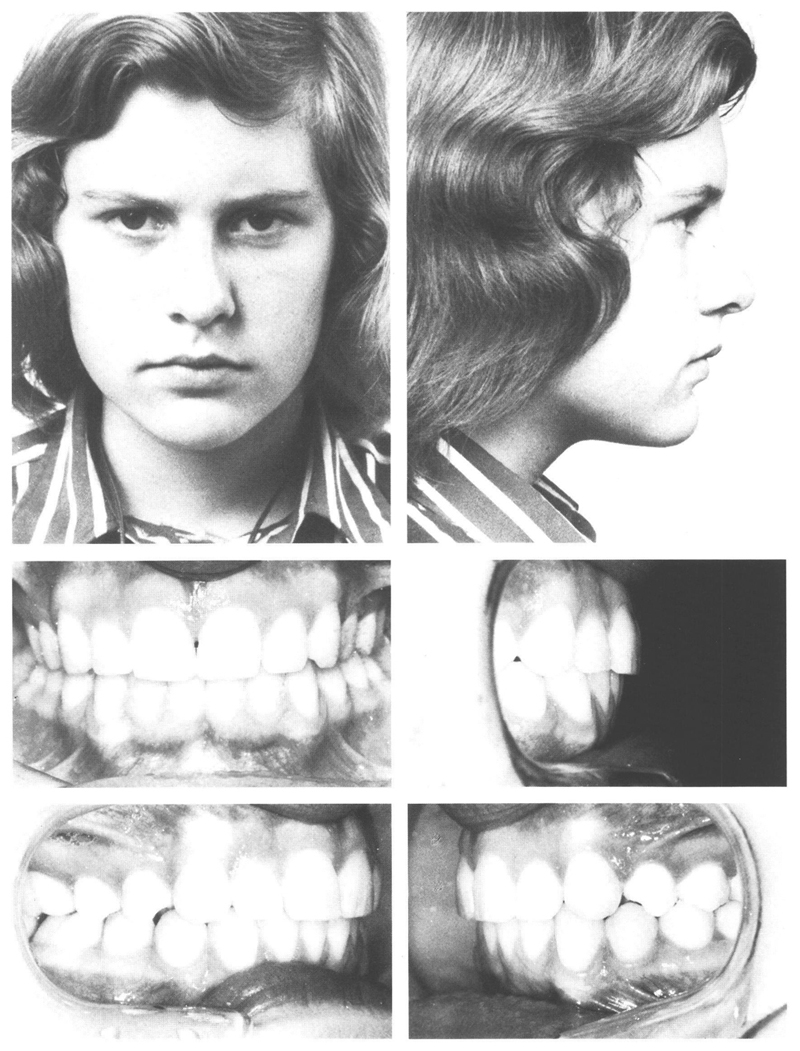 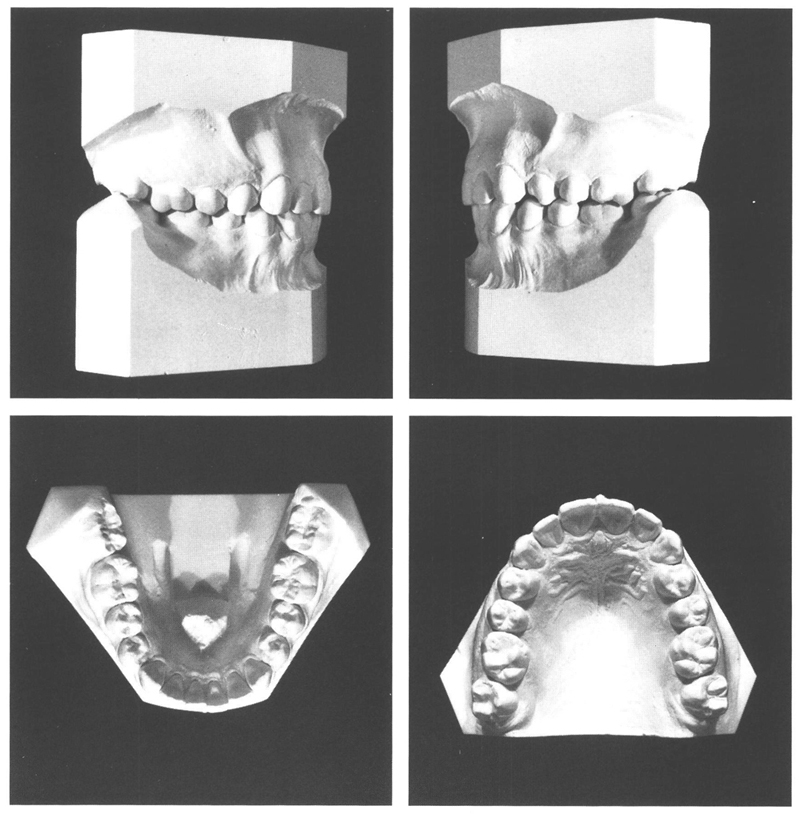 Figs 14-3 and 14-4 At the age of 13 y, 0 mo, at the conclusion of treatment, there is a nice profile and a nearly ideal dentition. Also the position and inclination of the maxillary incisors, the alignment of the mandibular incisors, and the occlusion up to and including the first permanent molars leaves little to be desired. In the maxilla, insufficient space is available for the second permanent molars, which are positioned in buccoversion. On the basis of the space already available for them at the beginning of treatment (see Fig 14-2), it might be assumed that two y later they would have been well-placed in the dental arch. In the mandible, the right second molar is rotated mesiolingually. It might be emphasized that the disappearance of the mandibular incisor crowding and the correction of the lingual position of the lateral incisors after the slicing of the mandibular second deciduous molars occurred without the use of any appliances.

Two years after treatment (15 years, 0 months), the result appeared to be stable. Indeed, more room had been provided for the second molars; those in the maxilla had moved palatally, while the mandibular right second molar had uprighted and lost its rotation (Figs 14.5 and 14.6). Thirteen years after treatment, there were few changes to be seen except for minor movement of the mandibular anterior teeth. The maxillary third molars had emerged distally. It was suggested that the impacted mandibular third molars be removed, and to avoid problems of over-eruption that the maxillary ones also be extracted. This was done a short time later, with the exception of the maxillary left third molar (Figs 14.7 and 14.8). 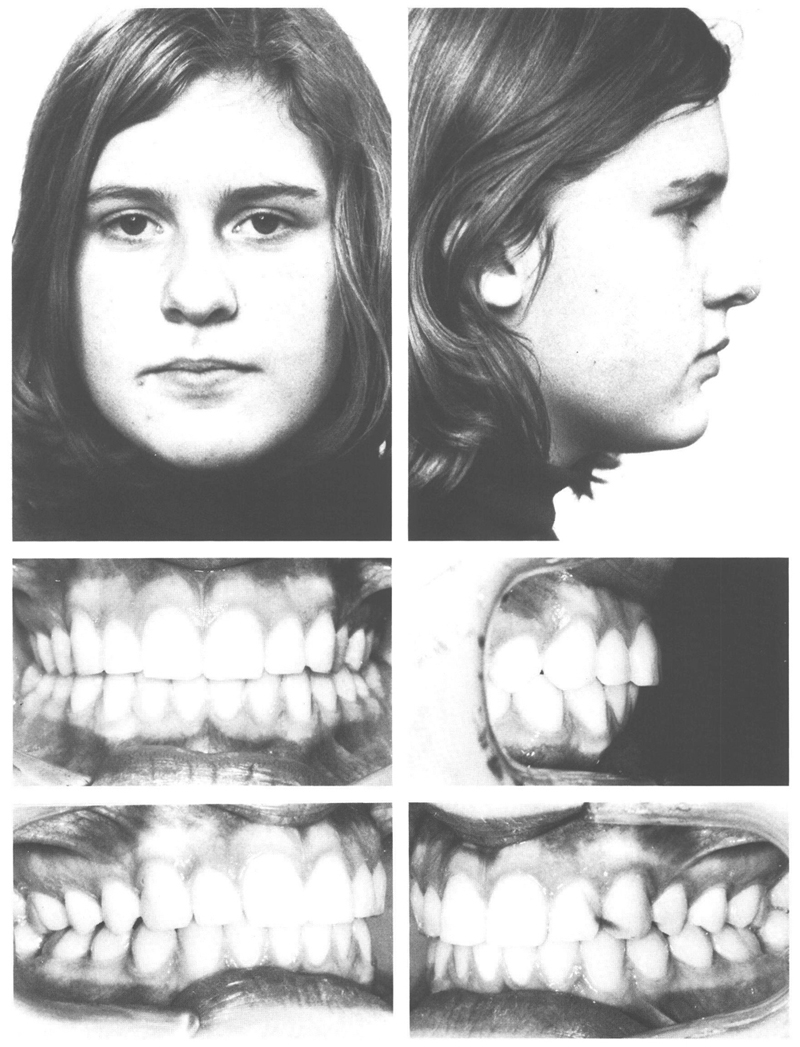 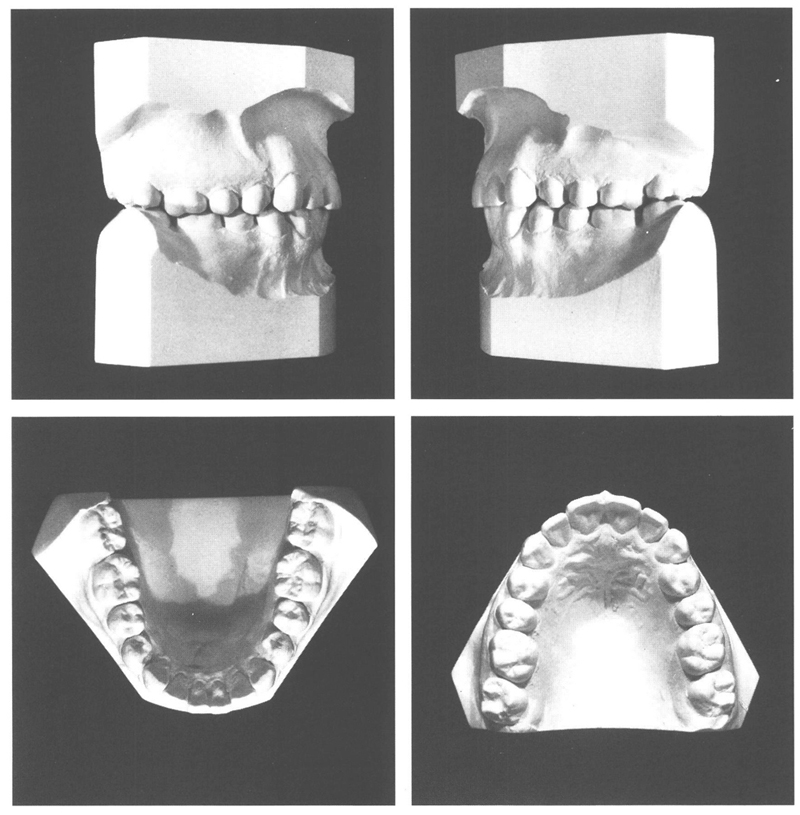 Figs 14-5 and 14-6 At the age of 15 y, 0 mo, the face has changed little in comparison with two years earlier. The dental conditions are likewise almost the same. The mandibular right second molar has indeed uprighted itself and rotated into a better position. This movement is associated with more space becoming available through the growth of the mandible. That also applies to both the maxillary second molars, which are positioned more palatally than two years earlier However they still do not occlude well. 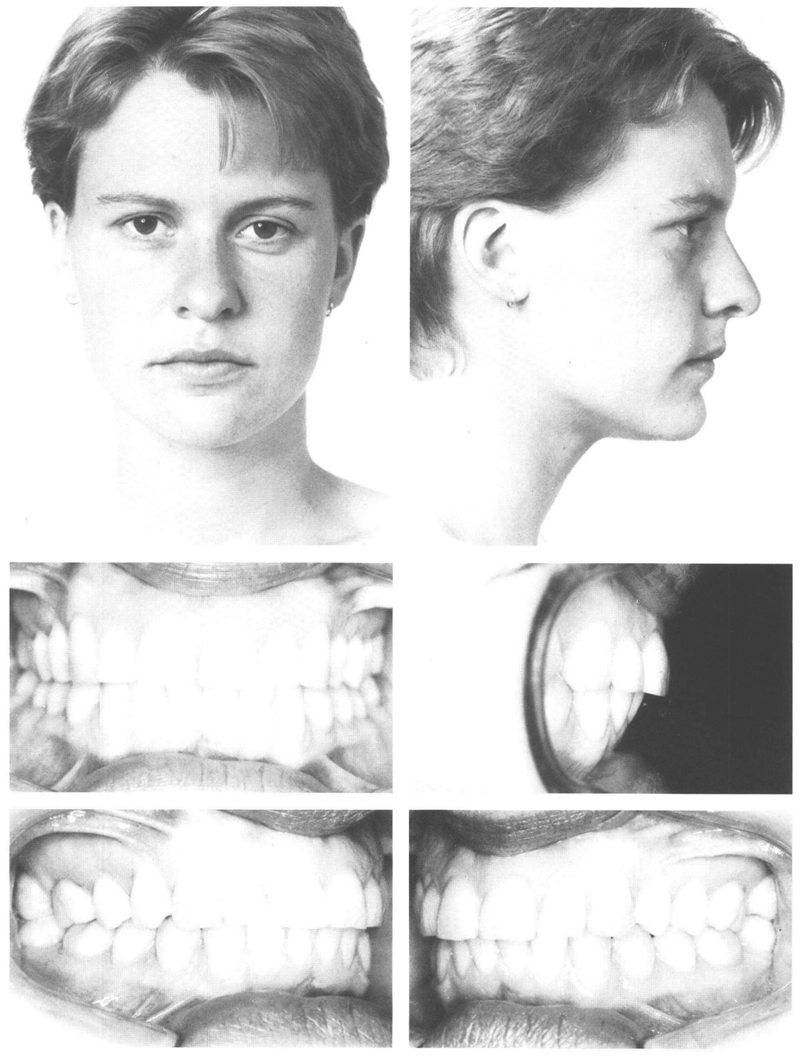 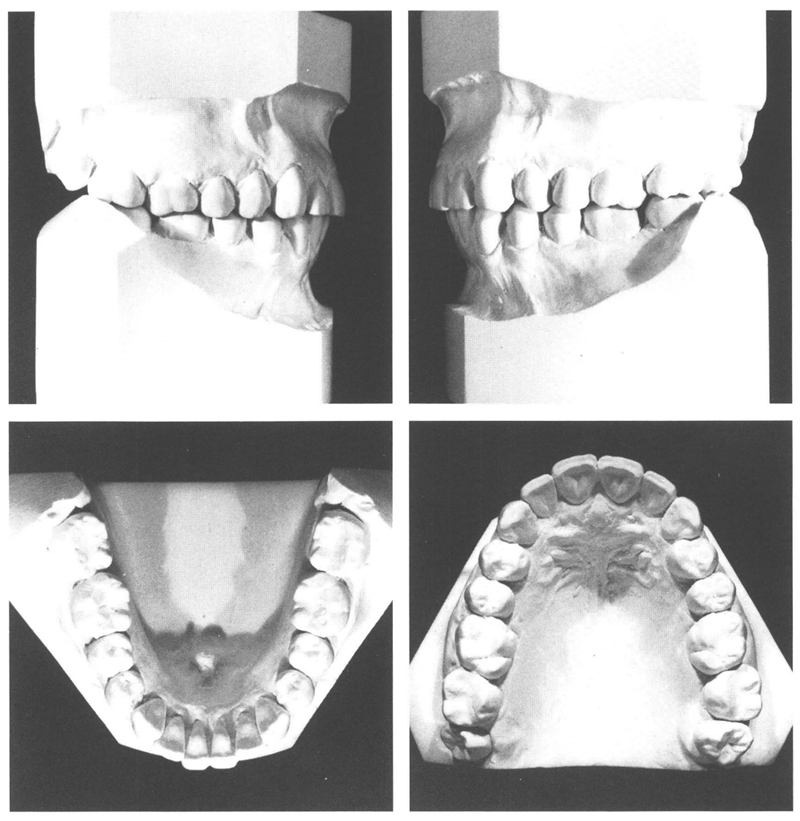 Figs 14-7 and 14-8 The result is still very acceptable at the age of 26 y, 2 mo, thirteen years after treatment; a nearly ideal dentition in a harmonious face. Tertiary crowding has developed in the mandibular anterior region, with the canines displaced slightly to the lingual and the central incsors to the labial. The third molars in the mandible are impacted, and those in the maxilla have erupted in abnormal positions due to lack of space.

The records at the age of 29 years are provided because they show the effect of extraction of a third molar on the position of the second molar in locally crowded situations. It seems that after extraction on the right side some changes did occur.

The second molars in both the mandible and maxilla had the opportunity to re-align on the right side, but not on the maxillary left side. In the maxilla, due to the crowding in the posterior section of the apical area, the presence of the third molar had previously impeded the adequate movement of the second molar to palatal and of its apices to the distal. By the age of 29 years, those movements had occurred on the right side but not on the left side (Figs 14.9 and 14.10).