A boy aged 8 years, 2 months exhibited a mild class II/1 anomaly with crowding in mandibular and maxillary anterior regions. Oral functions were normal and unstrained mouth closure was routine. The maxillary right lateral deciduous incisor had been lost early and the mandibular permanent lateral incisor on the left had emerged lingually. The disto-occlusion was ½ PW (a little more on the left than on the right) and the midlines of the dental arches did not coincide. Moyers’ mixed dentition analysis indicated a lack of space of 4 mm in the mandible and 6 mm in the maxilla.

The narrow maxillary lateral incisors pointed to an anterior TSD with relatively too much tooth material in the mandibular anterior teeth (Figs 12.1 and 12.2). 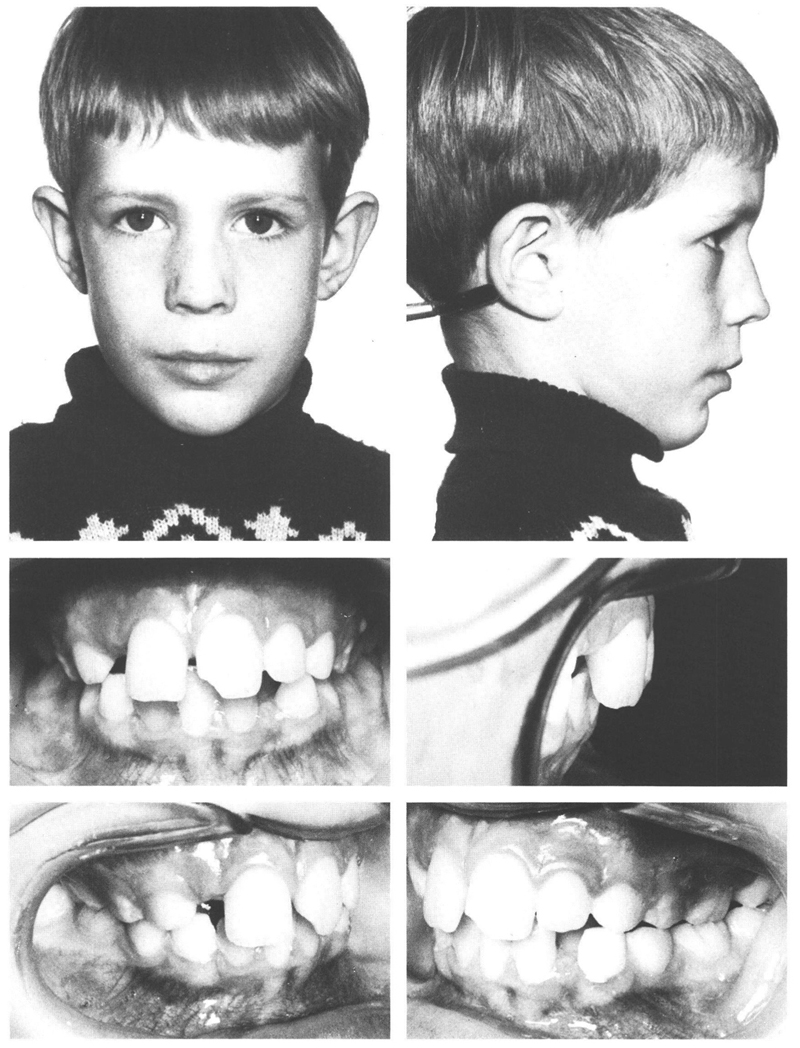 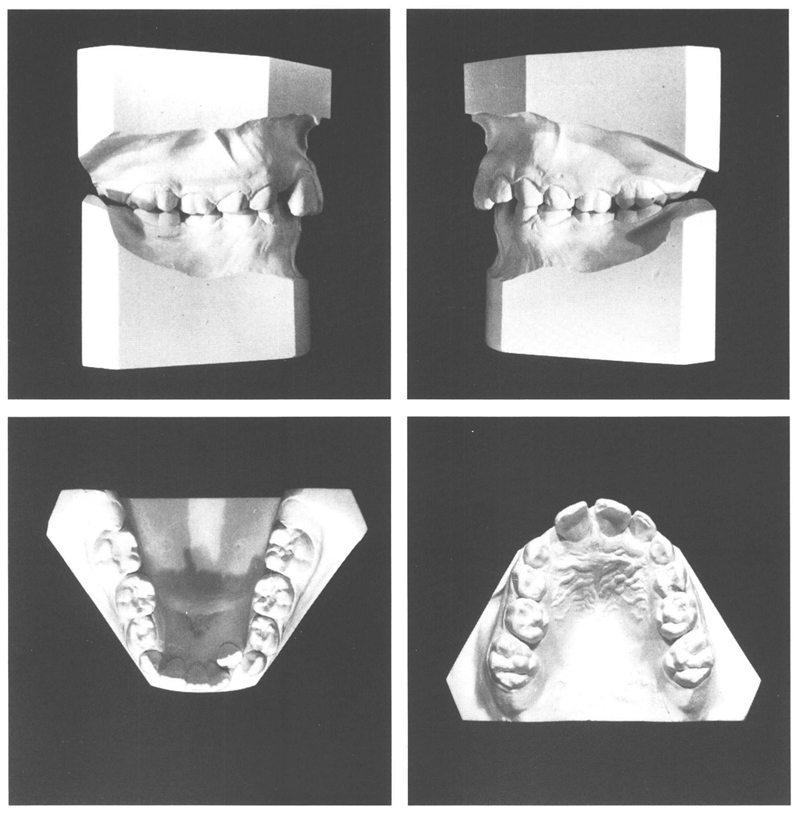 Figs 12-1 and 12-2 A boy aged 8 yr, 2 mo with a moderate class II/1 anomaly (disto-occlusion of ½ PW), a slightly receding chin, normal function, and competent lip seal. The mandibular and maxillary anterior regions exhibit crowding, which is concentrated on the mandibular left lateral incisor that is in linguo-position and on the maxillary right lateral incisor, which has insufficient room in which to emerge. The predecessor of the latter exfoliated due to resorption of its root before the emergence of the maxillary right central incisor. In the maxilla, the midline of the dental arch deviates to the right; in the mandible, to the left. The midline discrepancy is quite obvious.

It was decided that in the first instance the asymmetric development of the dentition in the anterior regions of both jaws would be corrected by removal of the maxillary left and mandibular right deciduous canines. The intention was that the incisors should drift toward the extraction spaces to reduce the deviation of the midlines (Figs 12.15 and 12.16). Six months later, the other two deciduous canines were removed. At a later stage a lingual arch would be placed on the mandibular arch to maintain the extra arch length that would become available in the posterior regions upon exfoliation of the deciduous molars. The lingual arch would serve not only to maintain the arch length for the benefit of the permanent mandibular canines that still were to emerge, but also to correct the linguo-position of the mandibular left lateral incisor.

The subsequent treatment was begun three years after the extraction of the deciduous canines, which had resulted in the expected improvements (Fig 12.3). All the deciduous teeth except the second deciduous molars had been replaced by their successors, although the permanent canines had emerged only a short time previously. The lingual arch was fitted, then a month later the cervical headgear was installed. The models made at the age of 11 years, 10 months show an intermediate stage in the treatment (Fig 12.4). The mesiodistal diameters of the mandibular anterior teeth could be reduced by 1 ½ mm (stripped). With that procedure, the TSD was corrected and more space was obtained in the mandibular arch. Moreover, a consequence of the broader contact areas created by the stripping was that better resistance to undesired tooth movements (tertiary crowding) was provided than was available with the original, more rounded approximal contours. 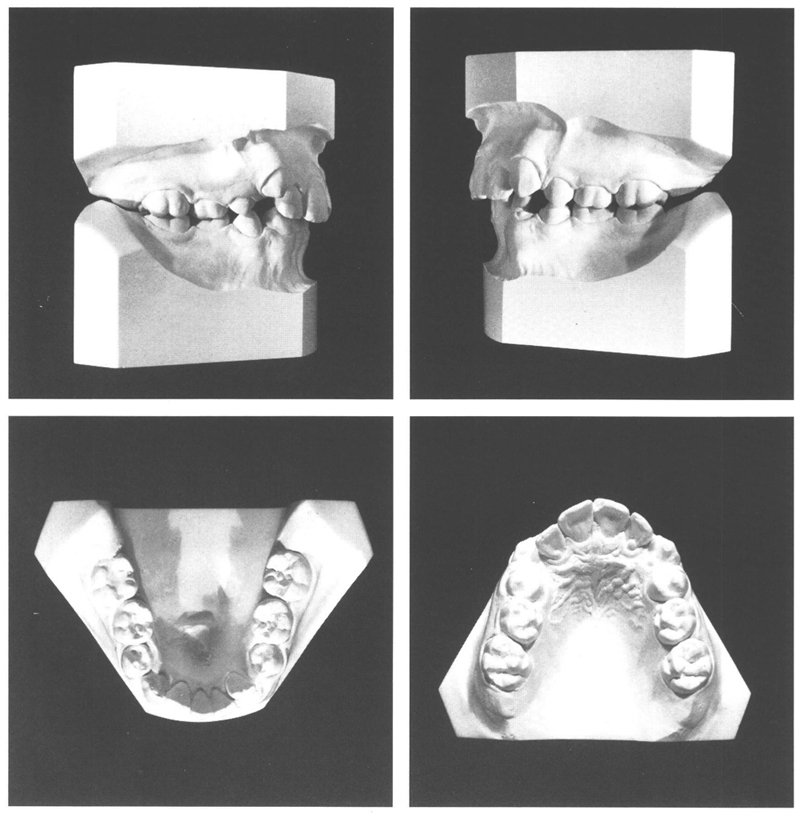 Fig 12-3 At the age of 11 y, 3 mo, three years after extraction of the deciduous canines, the maxillary and mandibular incisors have been for some time in better positions and the deviation in the arch midlines has largely been corrected, particularly in the maxilla. Since there has not been any active treatment in the meantime, the molar occlusion has barely changed. 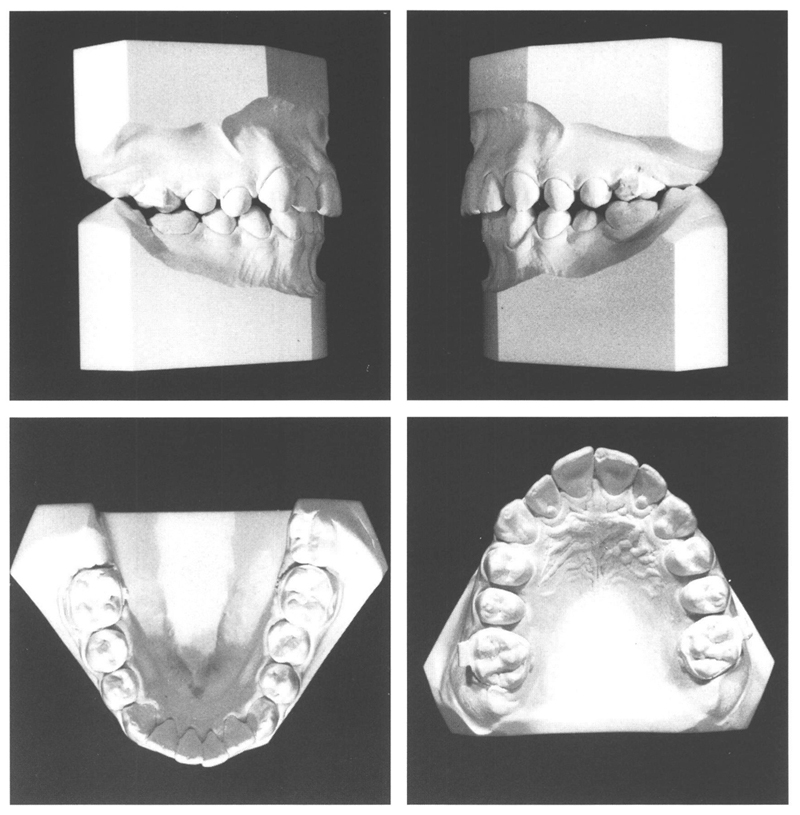 Fig 12-4 At the age of 11 y, 10 mo after six months of treatment with a cervical headgear and a lingual arch, the disto-occlusion has been entirely corrected on the right and almost corrected on the left. In the mandible, mesial migration of the first permanent molars after exfoliation of the deciduous second molars has been prevented. Moreover, in the mandible on the left more room has been obtained for the permanent canine and the lateral incisor has moved labially. In the maxillary arch more than enough space has been obtained, partly due to the first permanent molars having been rotated distopalatally (still not enough on the left). The canines have drifted to distal and palatal.

The lingual arch prevented lingual tipping of the mandibular incisors. To further reduce the depth of the bite and to obtain some individual tooth movements, a maxillary plate was inserted at the age of 13 years, 4 months. Four months later after two years and three months of active treatment, all appliances were removed. To secure improvements in details of the tooth alignment and to obtain better matching of the occluding surfaces of the dental arches, a positioner was provided. This was worn intensively for a month, and then for another year and eight months at night only for retention. The result was in every way satisfactory (Figs 12.5 and 12.6).