A boy aged 11 years, 1 month had a class II/1 anomaly with a marked ventral development of the mid-face, a retruded chin, and consequently an increased step between upper and lower lips. He could easily breathe through his nose and at rest his lower lip was held partly behind the maxillary central incisors. If in considering the molar relationships, the mesial drift of the mandibular first permanent molars due to premature loss of the deciduous molars was allowed for, there was a disto-occlusion of 1 PW. The ALD in the mandible was –4 mm; in the maxilla, –2 mm. Both maxillary central incisors, of which the left one had been fractured a year previously, were positioned more labially than the lateral incisors, with an overjet of 8 mm. The pronounced discrepancy in the jaw relationship, demonstrated also by the great antero-posterior distance between the anterior sections of the apical areas in both jaws (clearly to be assessed from the dental casts) indicated that the class II/1 anomaly was of skeletal origin (Figs 11.1 and 11.2). 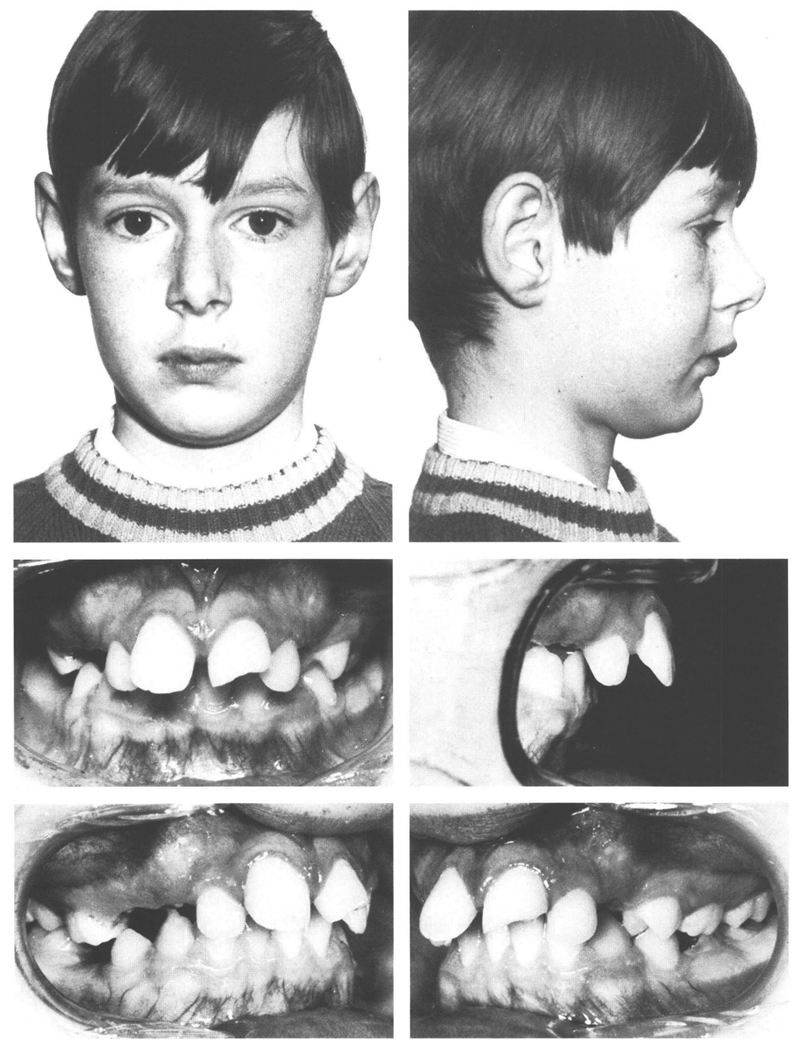 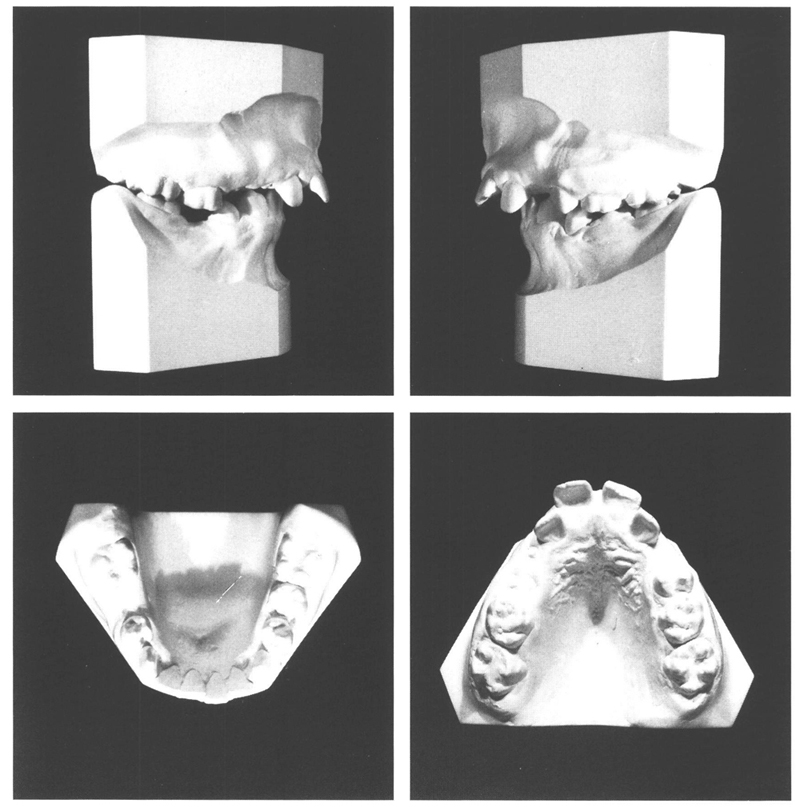 Figs 11-1 and 11-2 A boy of 11 y, 1 mo with marked ventral development of the mid-face, a receding chin, and a class II/1 anomaly. The disto-occlusion (1 PW) is attributable to the pronounced sagittal deviation between the jaws. This deviation can be seen well on the dental casts where the labial surface of the alveolar process at the height of the apices lies far further forward on the maxilla than on the mandible. Mild crowding exists in both arches. On the right the over-eruption of the maxillary second deciduous molar has blocked the mesial drifting of the mandibular first permanent molar that was occurring after the early loss of the mandibular right second deciduous molar.

It was decided to treat the problem with a cervical headgear, a plate in the maxilla, and a “lip bumper” on the mandibular arch (Fig 11.12). Originally it was intended subsequently to fit full fixed appliances, but the patient later was not prepared to accept them. For this reason, the situation arose in which a pronounced anomaly had to be treated with simple appliances, although it was clear that it was not possible to obtain a perfect result with such means.

The headgear treatment was begun at the age of 11 years, 4 months. Two months later, the maxillary plate was added. Five months later, the mandibular first permanent molars were banded and a lip bumper fitted. After a treatment of two years and two months, all appliances were removed. A good occlusion of the posterior teeth and solid interdigitation of the canines and premolars was obtained, although the maxillary canines and incisors were too upright. Crowding in the mandible still existed and most of the interproximal contacts between the mandibular anterior teeth were unsatisfactory (Fig 11.3). To finish, a retainer was fitted for the maxilla, with a continuous labial arch to provide rigid fixation for the maxillary incisors, and a biteplane to control the overbite. Further retention of the plate was provided by two three-quarter clasps embracing the first molars from the distal. The plate was ground free of the premolars palatally, and after three months worn only at night. The total retention time was one year and five months. The models made subsequently show little had changed in the maxillary arch, and that the overbite had not increased. The occlusion in the posterior regions had remained stable, because of the solid interdigitation. In the mandibular arch, the right central incisor had moved slightly to lingual (Fig 11.4). 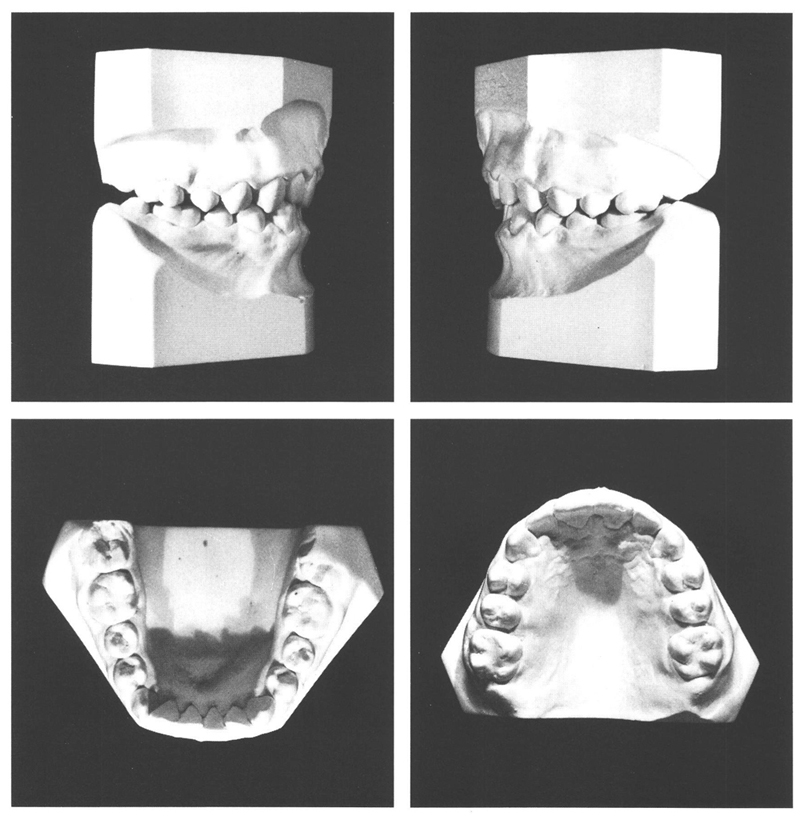 Fig 11-3 At the age of 13 y, 6 mo, after two years of treatment with a cervical headgear, a maxillary plate, and a mandibular lip bumper, neutro-occlusion has been achieved with solid interdigitation of canines and premolars. The form of both arches is good. However, the maxillary incisors are rather too steeply positioned and crowding prevails in the mandibular arch with associated poor interproximal contacts. With a go/>