The salivary glands are present in the oral cavity as either numerous minor glands dotted throughout the oral mucosa, or as one of the three pairs of major salivary glands.

All salivary glands are classed as exocrine glands – they produce secretions that are transported to the oral cavity through tube-like structures called ducts.

Other structures elsewhere in the body are classed as endocrine glands – their secretions pass directly into the adjacent vascular system and are transported distantly by the circulatory system, to their area of action. Examples are certain glands within the pancreas and the stomach.

Both types of glands have their secretions controlled by the effects of motor nerve transmission, via the autonomic nervous system.

The three pairs of major salivary glands are as follows:

The location of the major glands is shown in Figure 10.1. 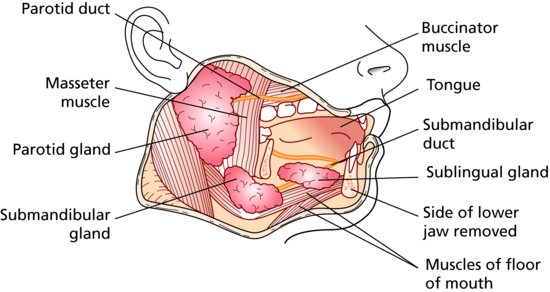 The parotid gland secretes saliva into the oral cavity via Stenson’s duct, which has its opening against the buccal surface of the upper first and second molar teeth, in the cheek.

The submandibular gland secretes saliva into the floor of the mouth via Wharton’s duct, which opens beneath the tongue, adjacent to the lower incisor teeth.

The sublingual gland secretes saliva into the floor of the mouth via Bartholin’s duct in a similar location to Wharton’s duct.

As dental care professionals will be aware, these three areas tend to be the main locations for calculus build-up in the patients’ mouth.

The three pairs of major salivary glands begin development in the embryo at around the seventh week, as growths of epithelial tissue from the oral ectoderm.

As the epithelial layer folds in on itself and grows into the underlying mesoderm layer, the secretory cells and ducts are formed, which will eventually produce and secrete saliva.

The inner surface of each duct is lined by specialised epithelial cells called secretory cells, which are grouped together at the end of the ducts as acini – these resemble a bunch of grapes, and are similar in layout to the microscopic structure of the alveoli in the lungs, as well as to other glandular tissue in the digestive system.

The secretory cells are one of two types in each gland, and the predominant cell present tends to determine the type of saliva produced:

In glands that produce both types of saliva rather than one or the other, such as the submandibular glands, both types of secretory cell are present.

Although the secretory cells produce saliva constantly, there are instances where its secretion into the oral cavity needs to be rapid, such as at mealtimes. Specialised contractile cells called myoepithelial cells are found on the outer surface of each acinus, and these act to contract and squeeze so that the saliva secretion is forced into the duct and out of the gland m/>