The impact of a retained fractured instrument on endodontic treatment prognosis has been assessed by two retrospective case control studies. The conclusion drawn from both studies was that a retained fractured instrument per se generally did not adversely affect endodontic case prognosis. In addition, the presence of a preoperative radiolucency was significantly associated with a reduced chance of healing [54, 55]. On the basis of the current best available evidence, the prognosis for endodontic treatment when a fractured instrument fragment is left within the root canal is not significantly reduced [56]. The success of removing a fractured instrument is closely related to whether the fragment can be visible using a dental operating microscope. In those cases where the fragment is not visible, the probability of successful removal is reduced significantly [57].
Several methods have been proposed for the removal of fractured instruments within the root canal system with varying limitations and success. Techniques include the use of the Masserann Kit [58], Endo Extractor [59], Canal Finder System [60], ultrasonic devices [61–63], staging platforms [64] and the Instrument Removal System (IRS) [65]. The inherent problems associated with all these devices include the risk of excessive removal of root canal dentine, ledging, perforation, limited application in narrow and curved canals and the possibility of extrusion of the separated instrument through the apex [60, 62, 66] (see fig. 11.1).
Successful removal of any retained fragment is dependant on factors such as the position of the instrument in relation to canal curvature, depth within the canal (apical, middle or coronal) (Fig. 11.2), whether the instrument is visible using the dental operating microscope and type of instrument that has separated (NiTi or stainless steel files). The more apically positioned the instrument, the greater the risk of iatrogenic damage, including root perforation or fracture. Conservation of root dentine is paramount to long-term longevity of the tooth, and this must be balanced against the proviso of straight-line access necessary to visualize the instrument. In some cases, it would be advisable to consider leaving the instrument in situ especially if the instrument can be bypassed or the instrument is at or beyond the curvature where visibility is less than ideal or not possible [67]. 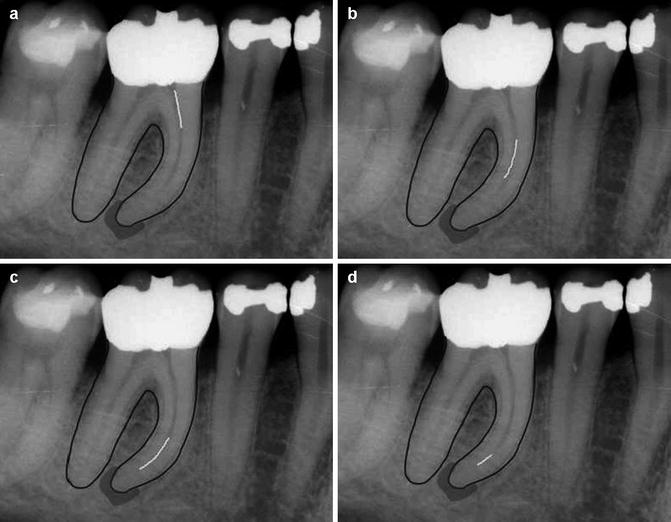 Fig. 11.2
Diagrammatic representation of location of instrument and ease of removal. Note (a) coronal fragment, (b) middle 1/3 and (c) apical at level of curvature. (d) Presence of an instrument beyond the curvature where retrieval attempt is the most difficult and adverse risk is greatest
Another consideration when determining whether to bypass/leave a separated instrument as opposed to removal is when instrument breakage has occurred. Early instrument breakage increases the likelihood of inadequate chemomechanical canal enlargement, debridement and ineffective microbial load reduction. If the instrument cannot be bypassed and then provided, it is not at the apex or beyond the curvature instrument removal could be recommended, particularly if a peri-radicular preoperative radiolucent lesion is present.
Careful adherence to recommended principles when using rotary NiTi instrumentation would minimize the unfortunate occurrence of instrument fracture. Where instrument fracture has occurred, the patient should be informed, and appropriate referral sought to an endodontist for case assessment. The decision to bypass or leave the instrument in situ must be weighed up with the benefits of removal. Intraoperative factors such as timing of separation, type of instrument fractured, length of instrument fracture, position of fractured instrument (apical, middle and coronal), level of apical curvature in relation to fractured instrument, presence or absence of apical periodontitis, possibility of merged canals, residual dentine thickness and visibility must all be considered before making a decision.