ions resulting in bacterial cell protein denaturation and damage to DNA and cytoplasmic membranes. It has a wide range of antimicrobial activity against common endodontic pathogens but is less effective against Enterococcus faecalis and Candida albicans [19–21]. E. faecalis has been reported to withstand the high pH of calcium hydroxide due to a functioning proton pump with the ability to acidify the cytoplasm increasing it chances of survival [22]. A 10-minute application of calcium hydroxide does not reduce viable bacterial counts in infected root canals, whilst a 1-week application has a major effect [23]. Ideally calcium hydroxide suspension should be applied for the interim and administered as thin slurries using a spiral-type filler [24]. Thin slurries enable ionic (calcium and hydroxyl ions) flow, which is only possible in an aqueous environment responsible for the calcium hydroxide effect. To remove the calcium hydroxide at the initiation of the second visit, calcium-chelating agents can be used (see Fig. 6.1). Agitation of the chelating agent using the master apical file size or an ultrasonic or sonic instrument can further enhance the removal of calcium hydroxide deposits within the canal system [25].

Fig. 6.1
Clinical radiographs demonstrating long-term calcium hydroxide dressing placement in teeth 31 and 41. A fit and healthy 27-year-old female patient was seen for endodontic consultation regarding management of teeth 31 and 41. The patient had previously seen her general dental practitioner who had started root canal therapy but was unable to achieve dry canals. The patient was then referred to an oral maxillofacial surgeon regarding apicectomy procedures. The patient was not keen on a surgical approach and decided to seek a second opinion. At time of consultation, the patient was asymptomatic. Clinical examination confirmed both teeth 31 and 41 had intact lingual access cavities. Radiographic examination revealed a periradicular radiolucent lesion associated with the periapices of teeth 31 and 41. Nonsurgical root canal treatment was commenced, and a decision was made to place long-term calcium hydroxide dressings that were replaced at 3 monthly intervals. Note (a) preoperative view. (b) Following chemomechanical debridement and intra-canal dressing, calcium hydroxide was placed. (c) Three-month review demonstrating periapical healing. The dressing was replaced in both teeth. (d) Six-month review demonstrating further healing. Calcium hydroxide was placed in a thin slurry using Lentulo spiral fillers. At the redress appointment, the calcium hydroxide was removed using ultrasonic agitation and 17 % EDTA
Intra-canal medicaments and the use of phenolic and non-phenolic biocide compounds have been used for chemical fixation of tissue remnants remaining after canal preparation. The concept of using chemical fixatives was the treatment modality when endodontic instruments and techniques were less well developed. Due to anatomical ramifications of the root canal system, poor penetration of fixatives, irritation and toxicity and carcinogenic potential, these types of medicaments should not be used [1].
Iodine has been used for many years and is known for its bactericidal and fungicidal properties. The two most common preparations used in dentistry are iodine tincture (5 % in alcohol) and iodine potassium iodide (2 % iodine, potassium iodide 4 % and distilled water 94 % (2 % IPI 4 %)). The former solution is used for the disinfection of endodontic surgical fields, whilst the latter has proven useful as an intra-canal medicament. 2 % IPI 4 % has been used in re-treatment cases for its effectiveness in killing E. faecalis [26] and C. albicans [27].
Antibiotic pastes have been used as intra-canal medicaments, and the two commonest antibiotic-corticosteroid-containing commercial preparations include Ledermix™ paste and Septomixine Forte™. Ledermix paste is a glucocorticoid antibiotic compound that was developed by Schroeder and Triadon in 1960. It is used to control pain and inflammation. The sole reason for adding the antibiotic component to Ledermix was to compensate for what was perceived to be a possible corticoid-induced reduction in the host immune response. Today Ledermix paste remains a combination of the tetracycline antibiotics, demeclocycline, HCL (at a concentration of 3.2 %) and a corticosteroid triamcinolone acetonide (concentration 1 %) in a polyethylene glycol base. A 50:50 mixture of Ledermix paste with calcium hydroxide has also been advocated as an intra-canal medicament in cases of infected root canals and pulpal necrosis (see Fig. 6.2) [28]. 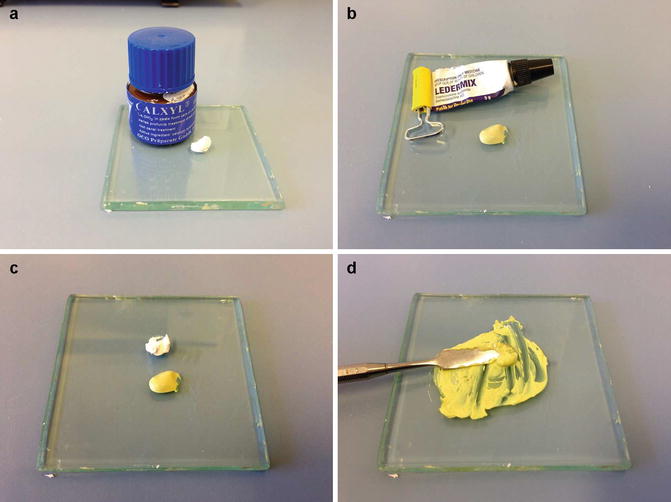 Fig. 6.2
Clinical photographs showing (a) calcium hydroxide dressing, (b) Ledermix dressing (antibiotic and corticosteroid), and (c–d) 50:50 mixture of calcium hydroxide/Ledermix
Chlorhexidine digluconate (CHX) has been recommended as an intra-canal medicament used as either CHX gel (2 % weight/volume) or a mixture of CHX and calcium hydroxide. CHX has a wide range of antibacterial activity (both anaerobes and aerobes), antifungal activity (candida species) and substantive properties. Its ability to absorb onto dentine, preventing microbial colonisation for some time beyond the actual medication period is an obvious advantage. The basis for mixing chlorhexidine with calcium hydroxide was on the speculation that it would be more effective against E. faecalis and C. albicans and in particular as a disinfectant during retreatment of failed endodontic cases [26, 27, 29–31].
Bioactive glass (BAG) contains calcium, phosphorus, sodium and silicon in a proportion that provides the material with surface activity and the ability to bond with mineralised hard tissue such as the bone or dentine. In an aqueous environment, BAG liberates Ca, Na, PO4 and Si, causing an increase in pH and osmotic pressure that results in an indirect antimicrobial effect. It has also been reported to chemically bond with mineralised tissues giving rise to a Si-rich layer that acts as a template for calcium phosphate precipitations. Due to its biocompatibility and antimicrobial activity (enhanced when in direct contact with dentine) makes BAG a possible alternative to calcium hydroxide inter-appointment dressings in the future [17, 32].
Application of nanoscaled antimicrobials to control oral infections, as a function of their biocidal, anti-adhesive and delivery capabilities, is of increasing interest. Future developments are likely to concentrate on those nanoparticles with maximal antimicrobial activity and minimal host toxicity. Although certain nanoparticles may be toxic to oral and other tissues, the surface characteristics of a given particle will help to determine whether or not it will have potential for oral applications with particular respect to biofilm formation [33].

6.2 Inter-appointment Application and Removal of Medicaments

Fig. 6.5
Clinical radiographs showing (a) preoperative view of tooth 36. (b) Working length radiograph and (c) intra-canal inter-appointment medicament of calcium hydroxide. Note medication was placed using a spiral filler. Some extrusion has occurred confirming apical patency. The medication will be resorbed over time. Excessive extrusion should be avoided since there is potential risk of tissue reaction
Prior to obturation of the root canal system, intra-canal medicament such as calcium hydroxide must be removed, since the presence of any remnants of dressing can impede the penetration of root canal sealers into the dentinal tubules and obstruct the bonding of resin sealers to dentine (Fig. 6.4). Effectiveness of removal relies on the use of a combination of irrigation (sodium hypochlorite and EDTA) with the use of hand, rotary or ultrasonic instrumentation. Furthermore, the use of patency filing improves the efficacy of calcium hydroxide paste removal.

Intra-canal medicaments are used for root canal disinfection and their role is secondary to cleaning and shaping procedures. Intra-canal medicaments have been used for a variety of purposes including elimination of remaining bacteria after root canal instrumentation, an aid to reducing inflammation of the periapical tissues, an aid to rendering root canals inert and further neutralising any remaining tissue debris within the canals, to act as a barrier to further bacterial ingress that may arise from the temporary restoration and to help dry wet, purulent canals. No ideal root canal material exists to date, which can fulfil all the desired properties a medicament should fulfil (see Table 6.2).
Table 6.2
Ideal properties of an inter-appointment medicament used in either non-surgical treatment or retreatment cases
Calcium Hydroxide
This material has been well accepted as an effective intra-canal medicament that is not only effective against most root-canal bacteria but also has the ability to degrade residual organic tissue remnants not removed from initial chemomechanical preparation procedures. Furthermore, calcium hydroxide inhibits microbial growth from within canals. Its antibacterial effect is due to its alkaline pH.
It can be placed as either a dry powder, a powder mixed with liquid such as water, saline, local anaesthetic, a sodium hypochlorite solution or as a proprietary paste in a syringe. Due to its low solubility, it can exert a lasting effect with slow dissolution over time. Advantages of using this material include its relative in expense, simplicity in placement and nonstaining of teeth. It has also been cited as a method to control “weeping canals” resulting in the drying out of any exudate that may arise from the periapical tissues. A major disadvantage is related to extrusion of the material into the periapical tissues that can result in severe pain and localised tissue necrosis (especially if large amounts have been extruded). Small amounts that are extruded are of no real concern and it should resorb over time (Fig. 6.6). Some clinicians prefer to mix it with a steroid paste to reduce any post-operative discomfort (Fig. 6.7). 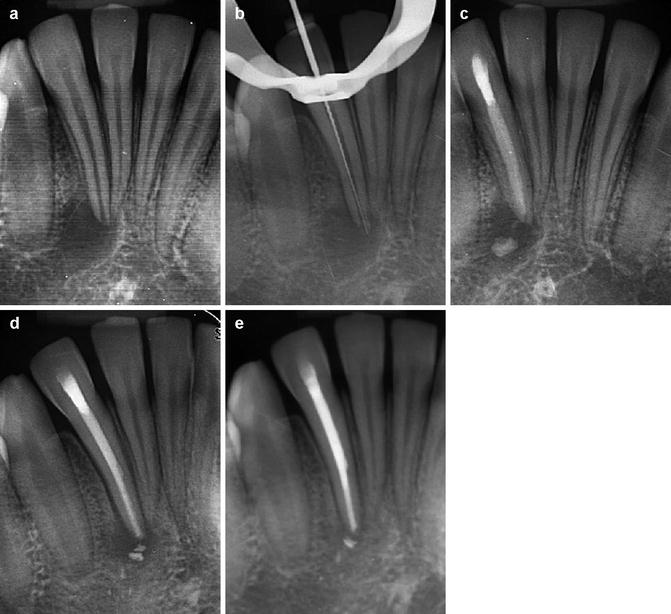