Aesthetic facial surgery is based on the mastery of plastic-surgical techniques and on extensive knowledge in otorhinolaryngology, plastic eye surgery, dermatology, and maxillofacial surgery. The ideal procedure for improving facial structures begins with an extensive examination, consisting of an individual analysis of the interplay of soft tissues, skeletal and dental structures, in order to define the aesthetic conditions of the physiognomy. 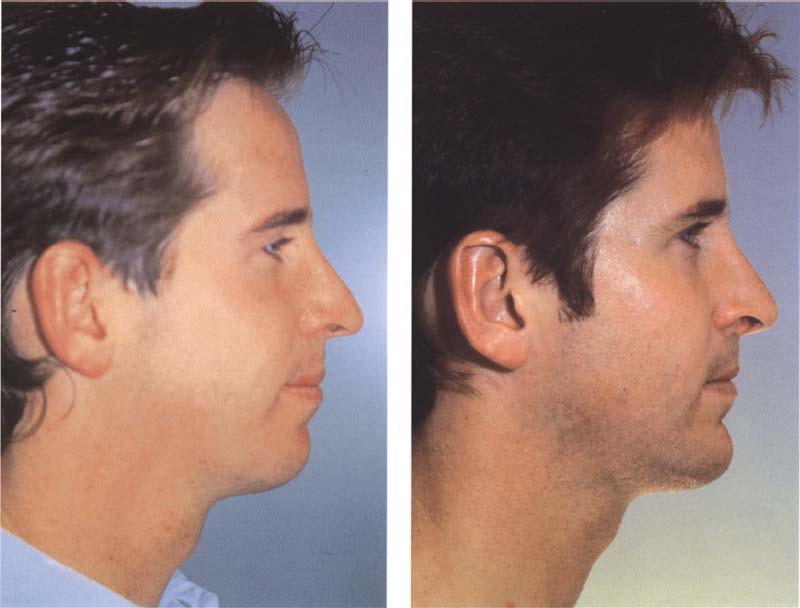 Left: This 25-year-old patient is unhappy with the geometry of his face and his fleeing chin.

Right: The surgical treatment of the chin has significantly changed the patient’s appearance (situation six months after surgery).

Abnormalities of the Chin

The shape of the chin allows for numerous deviations that are aesthetically acceptable. However, distinctive deviations in reference to height, width, or projection of the chin negatively influence the appearance of the lower third of the face. An unduly long (superior-inferior) chin with normal skin and soft tissue can restrict normal lip closure and cause the anterior mandibular teeth to become overemphasized. A hypoplastic (anterior-posterior) chin is often regarded as a “sign of weakness” and can have significant effects on the psychosocial situation of the patient.

The currently available genioplastic measures allow changes to the chin in all three dimensions, namely height, width, and projection. An anterior mandibular-vestibular (intraoral) cut enables the horizontal osteotomy of the anterior mandible.

The osteotomy is executed below the apex of the mandibular teeth, below the N. alveolaris inferior, and below the mental foramen and enables the mobilization of the chin. This cut creates a pedicle flap. The blood supply leads from the muscle insertions to the posterior and inferior surfaces of the chin. The bones are fixed by means of osteosynthesis wires, titanium screws, or plates. This allows a secure positioning of the segment during healing. If indicated, a midline cut enables the chin to be narrowed or widened. An increase or decrease in the length of the chin is done through bone transplantation or bone excision.

588 Abnormalities of the chin

The illustration after cephalometric evaluation of the radiograph confirms a class III malocclusion.

Right: The profile of the 20-year-old patient shows a distinctive progeny.

With the help of a lateral cephalometric radiograph (illustrated here) a bilateral sagital osteotomy has been planned. The lower jaw is to be moved about 3 mm dorsally/caudally and the chin will be protruded 7 mm for aesthetic reasons.

Right: The lateral view of the occlusion of the patient confirms the diagnosed progeny in the presence of a class III malocclusion.

A class III malocclusion can be the result of a vertical or horizontal maxillary hypoplasia, a horizontal mandibular hyperplasia, or a combination of these deviations. The clinical examination and cephalometric analysis enable the anatomical discrepancy to be exactly localized. If the class III malocclusion is due only to bilateral hyperplasia, the corresponding treatment consists in a reduction of the maxillary excess combined with mandibular Osteotomie.

The most widely used technique for correcting a horizontal mandibular hyperplasia is undoubtedly the bilateral sagital split osteotomy that was first described by Trauner and Obwegeser (1957). This versatile osteotomy technique allows for the bilateral division of the mandibular ramus under careful protection of the inferior alveolar nerve vessel bundle.

The mobilized distal segment of the mandible is positioned in optimal occlusion and stabilized by means of a temporary intermaxillary fixation.

The mandible is fixed using titanium screws and plates. The intermaxillary fixation is removed intraoperatively, so the mandible can be manually repositioned in order to obtain a perfect occlusion. A crucial component of this intervention is the careful positioning of the proximal fragments as well as the proper positioning of the condylar process of the mandible in the mandibular fossa. Elastic ribbons are placed to affix the mandible to the maxilla during the healing process. The mandible has generally healed approximately eight weeks after the intervention. The patient can resume normal eating habits as well as active oral hygiene measures.

590 Surgical sagital osteotomy and dorsal displacement of the mandible

Model of the planned osteotomy, the dorsal displacement of the mandible, and the protrusion of the chin.

Left: The intraoperative view shows the screw attachments of the ramus of the mandible.

The patient now has a normal class I occlusion.

Left: Postoperative profile of the patient with retracted lower jaw and protruded chin.

An excessive vertical length of the maxilla can result in a variety of symptoms. A vertical maxillary hyperplasia in the area of the posterior maxilla alone will lead to an anterior open bite and a reduction in occlusion in the posterior tooth region. If the entire maxilla is involved by the hyperplasia, the consequence is a maxilla with excessive visibility of the teeth as well as impeded lip closure (lip incompetence). High palate vaults, restricted nasal airways, and relative mandibular retrognathia are also frequently observed in connection with vertical maxillary excess. Deflection of the septum, narrow nasal airways, hypertrophy of the conchae, mucousal inflammation, or a combination of these factors can cause a hindrance of the nasal airways. The relative mandibular retrognathia is based on the downward rotation of a mandible of normal length, which is forced into a more retruded position by the vertical maxillary excess.

The vertical maxillary hyperplasia can be surgically corrected with LeFort I osteotomy. An intraoral cut in the vestibulum permits horizontal osteotomy of the maxilla above the root tips, below the infraorbital foramen as well as the zygomatic bone. Then, resection of the maxillary segment permits an upward repositioning of the entire maxilla in habitual intercuspation or in a position according to a p/>