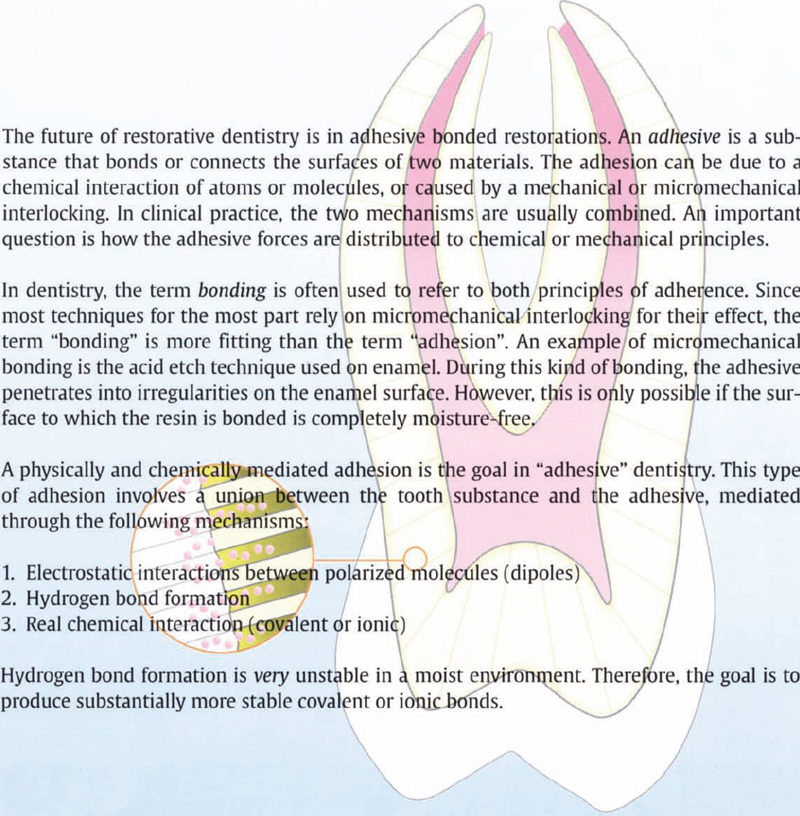 Bounocore introduced the acid etch technique in 1955. However, it took almost 20 years for it to be generally accepted in dentistry. The technique revolutionized dentistry and created the foundation for adhesive dentistry.

Enamel is a porous, nonvital substance. It consists of 96 (weight)% inorganic hydroxyapatite and 4% matrix containing proteins and water. Enamel is the hardest tissue in the human body and has a crystalline structure. The crystals form so-called enamel rods (Schroeder 1987). 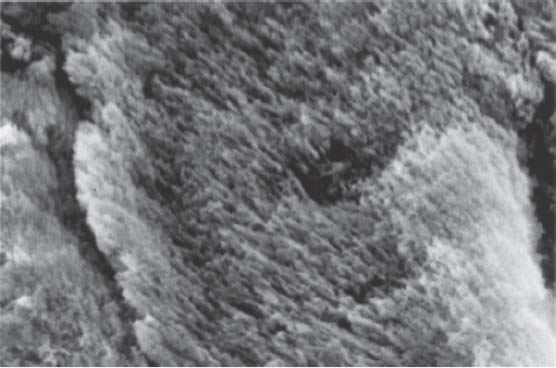 The SEM shows the direction of the enamel crystals within a single enamel rod. 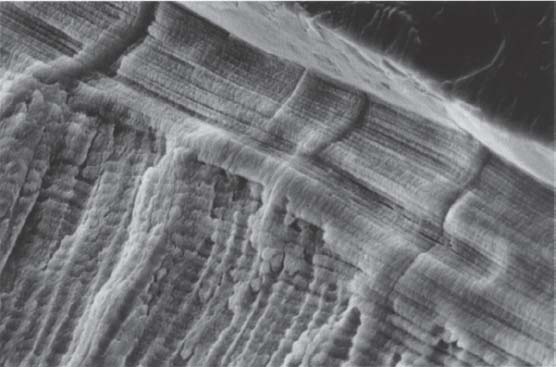 The aprismatic enamel layer proceeds parallel to the surface of the tooth and perpendicular to the underlying prismatic layer.

When bonding to enamel, the enamel surface must be treated with an acid. A 15–40% phosphoric acid is used for this purpose. Etching should be done for more than 15 seconds. This procedure leads to adhesion with a tensile strength exceeding 20 MPa. This strength is sufficient to resist the stresses induced by the polymerization shrinkage. 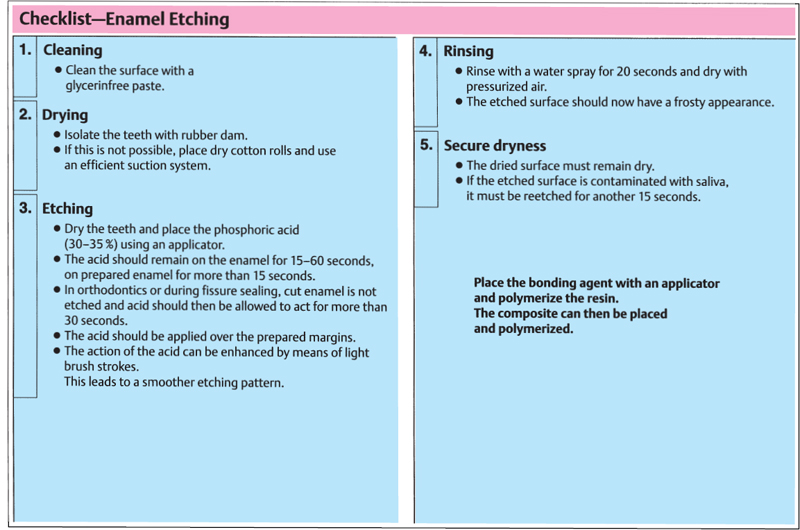 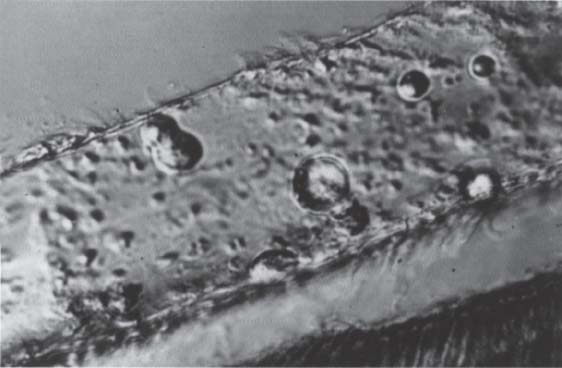 On the uncleaned enamel surface there is a pellicle consisting of organic material, to which no bonding is possible. This layer must be removed before bonding.

Dentin is a mineralized hard tissue, consisting of:

Dentin consists of approximately 50 (volume)% inorganic material, 30% organic components, and 20% water. The organic matrix of the dentin consists of 91–92% collagen and 8–9% noncollagen ground substance (Schroeder 1987). The inorganic components consist mainly of hydroxylapatite crystals that are smaller than those in the enamel. During cutting, a 1–5 μm-thick smear layer forms, consisting of burnished components and hydroxylapatite fragments. The smear layer blocks the dentin tubules and stops the tubule fluid escaping, but also prevents the formation of a chemical and/or a micromechanical retention of the dentin bonding agent (Gwinnett 1994). 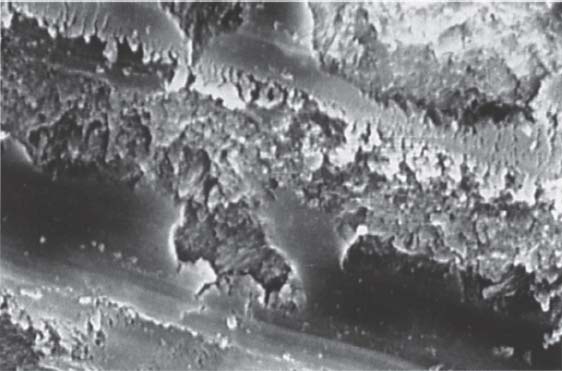 A smear layer that is pressed approx. 5–10 μm into the dentin tubules is formed each time a dentin surface is cut. This layer must be removed in order to enable the best possible bonding conditions for dentin bonding.

B The smear layer is dissovled through treatment with phosphoric acid

D Forming the hybrid layer with a dentin adhesive

The smear layer was for a long time the weak point in adhesive dentistry. The general opinion was that the dentin and the pulp would be harmed if dentin were etched. However, since it is very difficult to etch the enamel alone without at the same time etching the dentin, Fusayama raised the question in 1977 of what would happen if one intentionally etched dentin. His goal was to develop a working adhesive system and he was the first to explore the so-called total etch technique.

Total etch means that enamel and dentin are etched simultaneously. The result is astonishing. Not only is the bond strength value of the materials improved, but the pulp reaction against the material is also less pronounced. Fusayama, Hieda, Inokoshi, and others showed that the total etch technique did not increase pulp reactions, but rather reduced them (Fusayama 1980): The total etch technique protects the pulp, because after removal of the smear layer with a mild acid (conditioner) the opened dentin wound was sealed with a hydrophilic resin, for example, HEMA (primer; see below) and a bonding agent (adhesive).

During this treatment a dentin surface impregnated with resin (hybrid layer) is formed that guarantees an optimal dentin wound closure which is acid resistant and prevents bacteria penetrating.

Etching the dentin removes the smear layer, demineralizes the dentin surface and opens the dentin tubules. Now, a filled or unfilled resin (the adhesive) can penetrate the tubules and bond to the walls of the tubules. This hermetic closure of the dentin surface serves not only to protect the pulp, but also to form a micromechanical retention with the tubules and the collagen structures, which results in high mechanical bond strength values. The resin can only penetrate up to 10 μm into the tubules of vital dentin, because of the resistance of the odontoblasts, while in extracted teeth the resin can infiltrate the tubules up to 40 μm. Even repeated etching of the dentin does not lead to pulp irritation. If, however, the dentin surface is etched too aggressively and over too long a period, a reduction in bond strength will occur, but it will still not cause any pulp irritation. A longitudinal study (Inokoshi et al. 1982) showed that following treatment of 224 deep caries lesions with the total etch technique, only one pulp necrosis occurred. In another study of 213 deep caries treatments, not a single nonvital pulp was found after four years.

Phosphoric acid is applied for 15 seconds. The acid dissolves the smear layer and opens the dentin tubules up to a depth of 10 μm. Using a powerful water spray, the acid and the dissolved smear layer are removed. If the cavity walls, despite use of rubber dam, are contaminated with saliva or blood, acid treatment and the rinse must be repeated.

After etching and rinsing, the cavity is lightly blow-dried. Low levels of moisture increase the bond strength values of many dentin adhesives. Immediately after this, the primer, usually a hydrophilic monomer mixed with a solvent, is applied. The solvent in many dentin adhesives is an easily evaporating alcohol (usually ethanol) or acetone (e.g., All-Bond 2). It penetrates into the moist dentin surface and displaces the fluid, whereupon the solvent evaporates and leaves the hydrophilic monomer. This process is called priming. It is very important that the solvent in the primer has evaporated before the bonding agent (adhesive) is placed. Airflow accelerates this. The solvent could otherwise disturb the polymerization of the adhesive. As the last step in the formation of a hybrid layer, the adhesive is applied and polymerized. 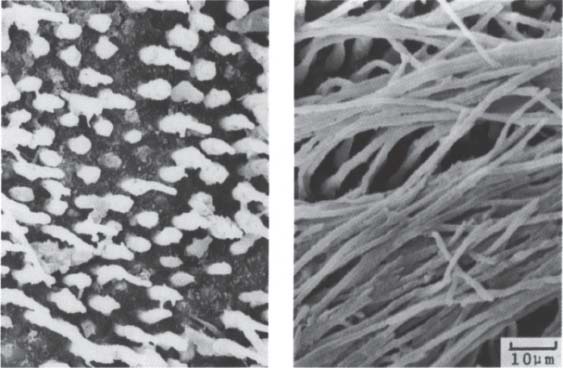 Etching the dentin removes the smear layer and produces a demineralized dentin surface. This enables the primer to penetrate into the dentin and to impregnate the collagen fibers with monomer.

Left: Resin has penetrated into the dentin tubules.

Right: The resin encloses the collagen fibers and forms a resin-impregnated dentin surface.

209 Structure of a hybrid layer

This resin-impregnated dentin layer is also known as a hybrid layer. It serves to protect the pulp. The resin penetrates approx. 10 μm into the dentin tubules.

Left: Hydroxyethyl methacrylate (HEMA) is one of the most important components of modern dentin adhesives.

In 1951, Hagger developed one of the first bonding agents. It was a glycerophosphoric acid dimethacrylate. The product was named Sevriton. The bond was not very strong in a moist milieu and disintegrated over time (Hagger 1951).

In 1965, Bowen introduced the first dentin adhesive. Through copolymerization, an N-phenylglycin-glycidyl-methacrylate (NPGGMA) was to be bonded to the tooth. This is a bifunctional molecule, one end of which bonds to the dentin, while the other end bonds with the resin-based restoration. Cervident by S. S. White was the first commercial dentin adhesive.

Clinical performance: More than 50% of the restorations failed within six months.

Other dentin adhesives used an improved adhesive system based on aminocarboxyl monomers (e.g., MirageBond and Tenure).

In 1978 the first Clearfil Bond System F came to the market (Kuraray). It contained a hydrophobic monomer (Phenyl-P = Methacryl-oyloxyethyl-phenyl-hydrogen phosphate), which reacted with a water-soluble methacrylate (HEMA = Hydroxyethyl-methacrylate), and was also marketed as a two-component system. The activator initiators needed for the polymerization reaction were placed in the two components (Fusayama et al. 1979; Fusayama 1980). 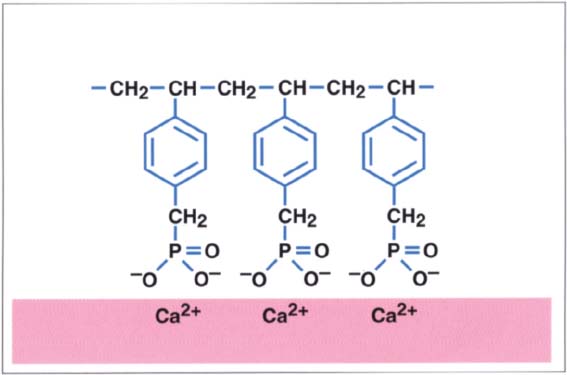 Phosphate-based dentin adhesives bond to calcium ions present in the smear layer. Even if the bond is initially very strong, it disintegrates over time in the moist environment present in the oral cavity through hydrolytic degradation (Hagger 1951). 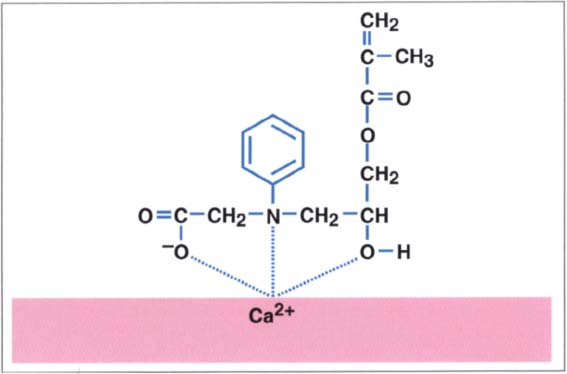 211 NPGGMA and its bonding ability to hard tooth surfaces

Amino carboxyl monomeres bond to calcium ions present in the smear layer. NPGGMA, a compound formed from N-phenylglycine and glycidyl methacrylate, was developed in 1965 by Bowen (Bowen 1965).

In 1983, Scotchbond appeared on the market. Scotchbond is very similar to Clearfil. Instead of phenyl-P, it contains a phosphate ester based on BisGMA. Like Clearfil, Scotchbond is a two-component system consisting of resin and liquid.

The resin consisted of 57% of the above-mentioned dichlorophosphate ester of BisGMA and 43% of a low viscous TEGDMA and the usual polymerization enhancers. The liquid contained 95% ethanol and additional accelerator initiators (camphor quinone, sodium benzene sulfate).

Function: Although Fusayama had already proved that the total etch technique did not harm the pulp, at that time the general opinion was still that dentin should not be etched. It was expected that with the help of the phosphate groups in the adhesive it should be possible to form a chemical bond to the resin restoration via the calcium-rich part of the smear layer. Therefore, the bond strength values were not significantly better than that of the smear layer (3.5–4.0 MPa).

Manufacturing and distributing dentin adhesives was a lucrative business. Shortly after introduction of the phosphate-based dentin bonding agents, numerous similar products came on the market:

After one year in clinical service, 30% of class V restorations without enamel etching and 10% of the enamel-etched restorations exhibited loss of retention. The reason for these failures was due to the phosphate-based bonding agent dissolving or the smear layer disintegrating. Different thermal expansion coefficients led to leakage and accelerated the failure.

Bowen and Cobb (1965) proceeded in another direction. They did not target phosphate groups, but rather introduced an oxalate system. The original iron oxalate was replaced with aluminum oxalate because of tooth discolorations. The first commercial product based on this system was Tenure (Den-Mat), which was introduced in 1982.

The system was very complex and necessitated eight steps. As a consequence, this method was significantly simplified with the use of NPGGMA, a surface-active amino acid. 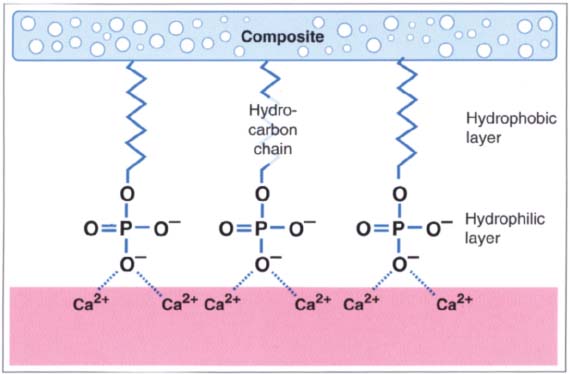 Most dentin adhesives consist of bipolar molecules. They have a hydrophilic end, for example the phosphate group that can interact with the calcium-rich dentin, while the hydrophobic end, usuallya hydrocarbon chain, bonds with the composite. 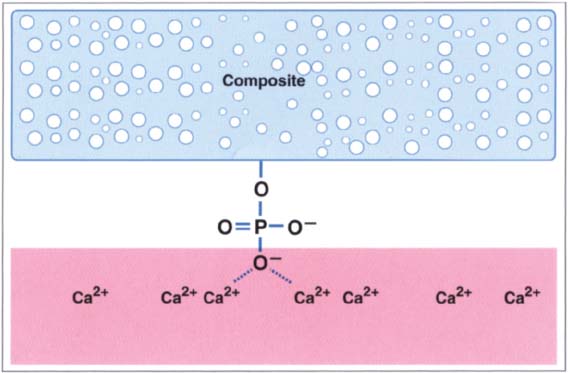 The first dentin adhesives were all similar in design. Scotchbond consisted of 57% phosphate-containing monomer (dichlorophosphate ester of BisGMA), monomer (TEGDMA), and a low quantity of benzoyl peroxide to accelerate the polymerization. The solution consisted of 95% ethanol in order to better cover the hydrophilic tooth surface with the hydrophobic BisGMA-resin.

Clinical studies of the first-generation dentin adhesives were not conducted until after they were introduced on the market. Since the results were often not satisfactory, improvements were desperately needed.

The following belong to the third-generation dentin adhesives:

—Mirage Bond (Myrons) and Restobond (Lee), were also developed by Bowen (1988): After the smear layer has been (partially) removed using a conditioner consisting of 4% NPG, 2.5% nitric acid, and 93.5% water, a hydrophilic resin (PMDM) infiltrates the surface.

—Munksgaard and Asmussen (Munksgaard and Asmussen. 1984; Asmussen and Munksgaard 1985) developed Gluma. The enamel is etched with 37% phosphoric acid. The dentin is conditioned and the smear layer is removed with 17% EDTA. The primer consists of 5% glutaraldehyde that reacts with the collagen present in the dentin. After it has bonded to the collagen, a condensation reaction occurs between 35% HEMA (and 60% water) and the collagen-bonded glutaraldehyde. After the primer has been placed, an unfilled monomer is applied and polymerized. Gluma was the first dentin adhesive with a very high, documented success rate. Gluma 2000 is glutaraldehyde-free.

—Scotchbond 2 uses no separate dentin conditioner. The primer is sufficiently acidic (2.5% maleic acid, 55% HEMA, and 40% water) to condition the smear layer. The binder consists of 62.5% BisGMA and 37.5% HEMA. Because this bonding agent had a very reactive oxygen inhibition layer, a rather thick layer had to be placed. The phosphate-based bonding agent was very similar to the original Scotch-bond. Scotchbond 2 was the first dentin adhesive that received provisional acceptance by the American Dental Association (ADA) (Vanherle et al. 1993).

—XR Bond uses a phosphate-containing primer that infiltrates the smear layer. As a result, a resin-infiltrated layer is formed to which the bonding resin is joined. 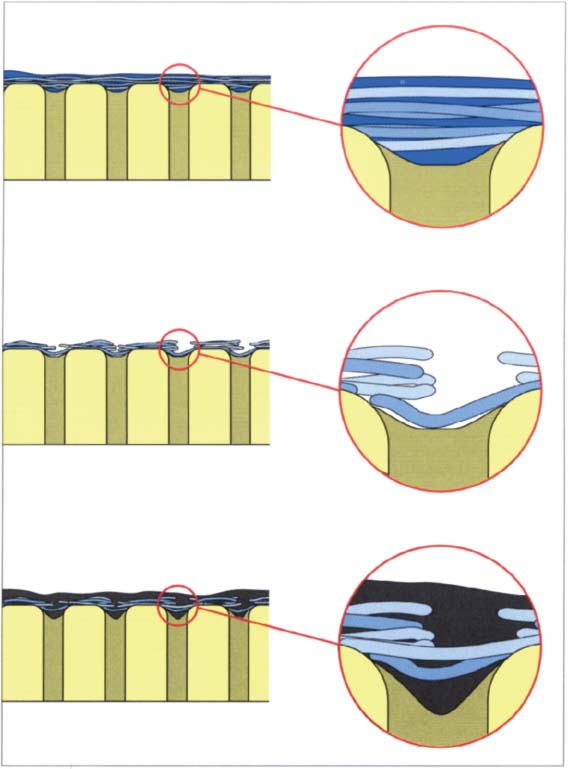 214 Infiltration of the smear layer

Below: By using a mild acid, a weak infiltration of the resin into the dentin occurs. Nevertheless, sufficiently high bond strength values cannot be achieved with this technique because the smear layer remains intact or partially intact.