9 Growth and Development of the Facial Complex: Interactions Among the Dentition, Skeleton, and Function

Growth and Development of the Facial Complex: Interactions Among the Dentition, Skeleton, and Function

This chapter begins with an explanation of interactions in the development of the facial complex with emphasis on functional aspects. Thereafter, the growth of the facial skeleton is presented, and the variation in growth patterns is illustrated. The contribution to growth of bone, cartilage, and the associated remodeling of bony surfaces is discussed. Finally, the functional factors acting in the orofacial region are described, with indications given regarding which ones are relevant for the development of the facial complex and which ones are not.

Interactions in the Development of the Facial Complex

The skeleton has a greater influence on the dentition than vice versa, and function has a greater influence on the skeleton and dentition than either entity has on it. The most important components of function are the soft tissues, particularly the musculature. They affect the growth of the bony structures, which initially determines the position of the teeth. After emergence, the arrangement of the teeth also becomes influenced by the musculature. The occlusion takes care of the fine-tuning of the positions of antagonists. The process described here is based on interactions among all three entities.

Fig 9-1 System of the facial complex. In descending order, the largest range of variation (expressed in the distance between the inner and outer lines) is assigned to the dentition, skeleton, and function. Each of them will develop in its own way and at its own pace within its given range of variation. Because of this, there is a degree of flexibility in their interactions. The thickness of the arrows indicates the intensity of the interactions.

An example of the interaction between function and the dentition is the stabilization of opposing posterior teeth. The ultimate positions of premolars and molars are determined by intercuspation. By this mechanism, the posterior teeth maintain their position, even in cases of periodontal breakdown and mobility.

Another example of interaction between function and the dentition is the occurrence of irregularities in the mandibular anterior region after the development of the dentition is completed. Anterior teeth do not interdigitate and are not fixed three-dimensionally by the occlusion. The incisal edges of the mandibular incisors mostly contact only the marginal ridges at the palatal surfaces of the maxillary incisors (Fig 9-2). In addition, the mandibular incisors have small labiolingual dimensions and narrow interproximal contacts.4 This combination results in an unstable equilibrium. Late displacement of mandibular incisors, and to a lesser degree sometimes maxillary incisors, is quite common.

A third example of interaction between function and the dentition is the phenomenon that adjacent teeth stay in contact when their width reduces by interproximal attrition. This loss of tooth material can amount to more than 6 mm per quadrant.5,6 In the maintenance of the continuity of the dental arch, three functional aspects play a role: the anterior component of occlusal force,7,8 the pressure of the labial and buccal musculature, and the traction of the supra-alveolar fibers9 (Fig 9-3).

Fig 9-3 Preservation of the continuity of dental arches. (a) Teeth stay in contact during the gradual reduction of their crown widths. This phenomenon is based partly on forces caused by biting (anterior component of occlusal force). (b) These forces can be resolved in vectors perpendicular to the occlusal plane and in mesial and transverse directions. (c) This resolution corresponds to the mesial angulation of most posterior teeth, the lingual inclination of the mandibular teeth, and the buccal inclination of the maxillary teeth.7 (d) In addition, the vestibular musculature and the traction of the supra-alveolar fibers contribute.9 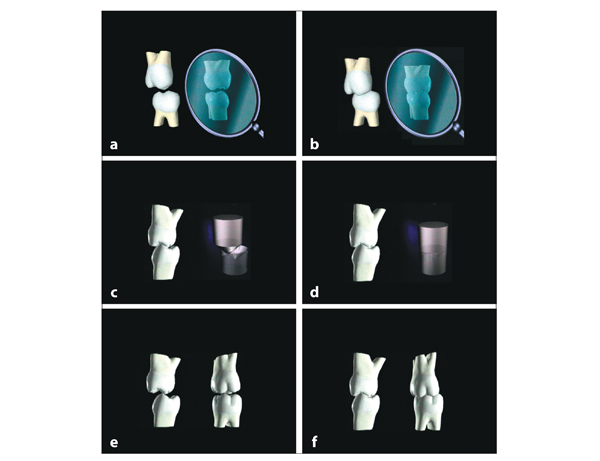 Fig 9-4 Cone-funnel mechanism. (a and b) Opposing posterior teeth rarely erupt in the precise position and orientation for intercuspation. Instead, they are guided into an optimal intercuspation by the cone-funnel mechanism, which comes into play for the first time when the first deciduous molars start to contact each other. (c and d) This occurs every time that opposing posterior teeth reach the stage of contact. (e and f) The maxillary teeth probably move more than the mandibular teeth. If the eruption is hindered, as in lateral tongue interpositions, the cone-funnel mechanism does not work. See video clip 26. (Printed from Van der Linden et al10 with permission.)

Another example of interaction among the three entities is the rail mechanism. With more anterior growth of the mandible than the maxilla, the mandibular teeth gradually occlude slightly more mesially, leading to some widening of the maxillary dental arch (Fig 9-5). 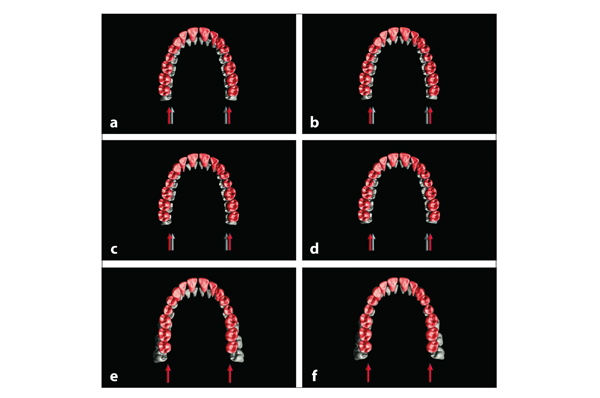 In the context of the interactions just described, it is obvious that intercuspation plays an essential role in the maintenance of the occlusion in the growing face.11 That role begins when the first deciduous molars reach occlusion. When they become worn down, the second deciduous molars take over the task. Subsequently, the first permanent molars perform the task. Six years later, in the period of significant jaw growth, the second permanent molars, together with the premolars, do the work. Another 6 years later, the third molars make their contribution (Fig 9-6). 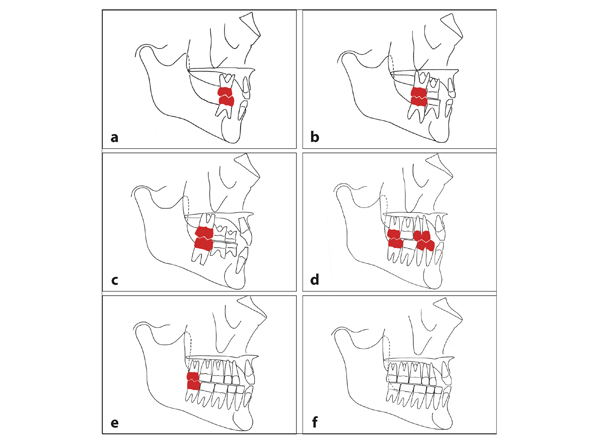 Fig 9-6 Role of intercuspation in the maintenance of occlusion, illustrated in a situation with excessive attrition. (a) After the first deciduous molars have reached occlusion at 16 months of age, the anteroposterior relationship between the dental arches is confirmed every time the molars are put together. (b) When the second deciduous molars have reached occlusion at 28 months of age, they will, together with the remaining cusps of the first deciduous molars, fulfill that role. (c) At 8 years of age, the first permanent molars, which emerged 2 years earlier, are only slightly worn. Their intercuspation secures the continuation of its role. (d) At 14 years of age, the task is taken over by the second permanent molars and premolars, which emerged about 2 years before. (e) Finally, the third molars perform the function. (f) After a number of years, all intercuspation has faded.

The adjustment in transverse development is based on a complex interaction of the three entities (Fig 9-7). It depends on the intercuspation in the posterior regions. A limited number of teeth are sufficient, as is also the case in the sagittal adjustment. However, if occlusal contact is not reached, as in lateral tongue interposition, the inclination of the teeth and the width of the dental arches are not adapted. The tongue is positioned low in the mouth and covers the linguo-occlusal margins of the mandibular teeth. The cone-funnel mechanism will not work. The mandibular posterior teeth remain perpendicularly positioned in the jaw, and the mandibular dental arch is wide. The maxillary dental arch is too narrow. 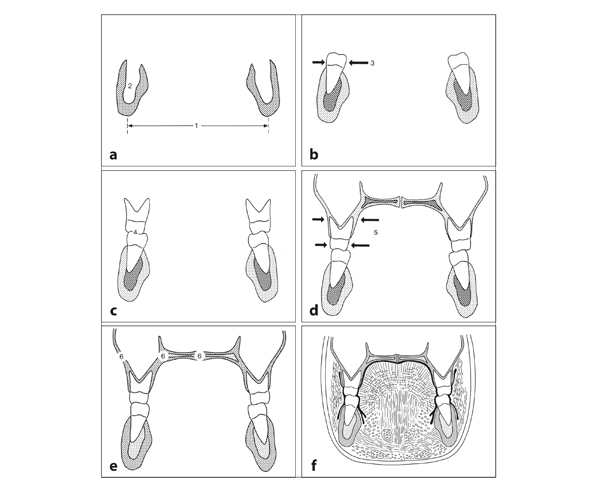 Fig 9-7 Transverse development of the jaws and the position of the first permanent molars. (a) The mandibular base does not change in width (1). There is little room within the cortical walls (2) for the localization of the apices. (b) The roots of the molars (3) are close to the buccal cortical walls. (c) The localization of the maxillary molar crowns depends on their intercuspation (4) with the mandibular crowns. (d) The occlusion with the maxillary molars and the pressure of the tongue and cheeks affect the inclination of the mandibular molars. That also applies to the maxillary molars (5). The occlusion together with the pressure of the tongue against the palate leads to broadening of the maxilla. (e) Through growth at the median suture and bone apposition buccally accompanied by resorption palatally (6), the maxillary apices can move buccally. This leads to an alteration in inclination. (f) The tongue and cheeks press against the molar crowns and alveolar processes. There are no data that indicate that the mandibular base increases in width by bone reconstruction. However, it has been shown that the mandibular canal displaces to the lateral by internal bone resorption and apposition.12

In a growing face, teeth migrate within the jaws. The intercuspation ensures that the teeth in both jaws are displaced in a coordinated way. In the absence of solid intercuspation, opposing teeth move independently of each other, and their position and inclination are not reciprocally adjusted. This applies to both the sagittal and transverse directions.

When all teeth, except the third molars, have attained occlusion, the permanent dentition is complete. However, the face still continues to grow the most during puberty and adolescence, particularly in boys. The soft tissues are the last to mature.13 These differences in timing and rate of growth and development of the various structures lead to specific interactions among the three entities. Through these interactions during the outgrowth of the jaws, the incisors upright and attain a more posterior position in the face. The pressure exerted by the lips increases.

The interaction between the skeleton and the dentition is demonstrated by means of the apical areas, which increase in size mainly by overall vertical growth and posterior growth at the maxillary and lingual tuberosities (Fig 9-8). Not only their size and shape but also the spatial relationship between the two apical areas is of importance. This relationship is the starting point for the inclination and angulation of the teeth (Fig 9-9). The division of the apical areas into anterior, middle, and posterior sections specified earlier is defined and illustrated in Fig 9-10.

Fig 9-8 Contours of the jaws in three developmental stages. (a) The base of the mandible becomes broader by bone apposition at the inner and outer surfaces. (b) The maxilla widens. The majority of the enlargement of both jaws is growth to the posterior. 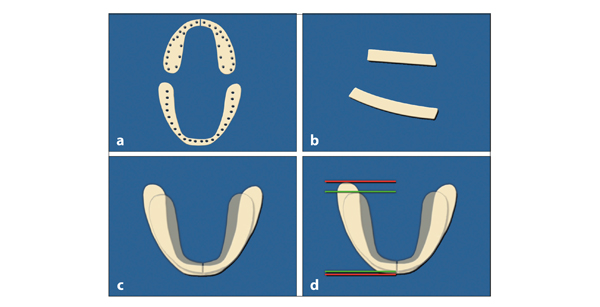 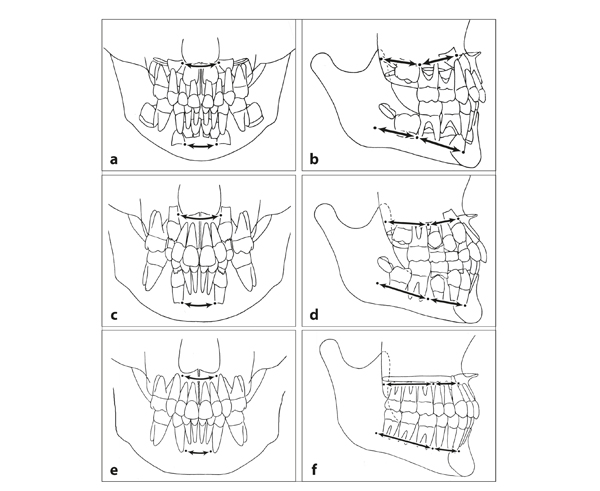 The dentoalveolar compensatory mechanism is an important phenomenon of interaction among the skeleton, dentition, and function (Fig 9-11). It is defined by Solow as “a system that attempts to maintain normal interarch relations under varying jaw relationships.”15 This mechanism works only if eruption proceeds normally and functional conditions do not deviate. Then the occlusion and pressure of the tongue, lips, and cheeks will lead to adequate contacts between the opposing teeth. Variations in the anteroposterior relationship within the anterior sections of apical areas can be adjusted by the inclination of the incisors. With a relatively receding maxillary anterior section of the apical area, the maxillary incisors are more labially inclined, and the interincisal angle is smaller. The inclinations of the canines, premolars, and molars vary in a comparable way.16 The dentoalveolar compensatory mechanism functions mainly in the permanent dentition and little in the deciduous dentition.17,18 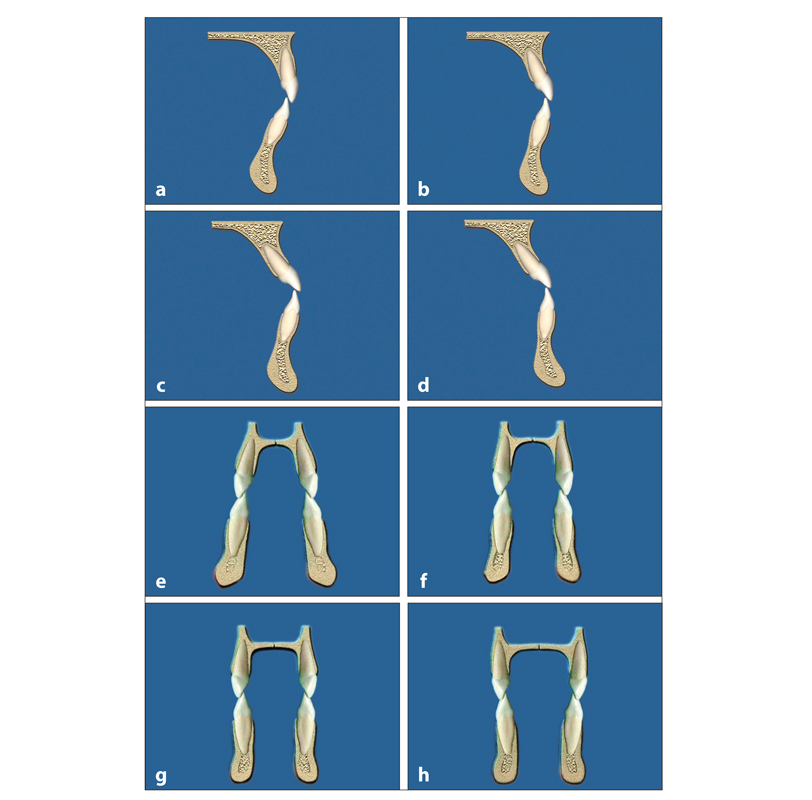 Fig 9-11 The dentoalveolar compensatory mechanism. (a to d) Depending on the anteroposterior relationship of the anterior sections of the apical areas, the inclination of the incisors varies. (e to h) The apices of the maxillary canines are located laterally and close to the piriform aperture, which can vary considerably in width, as can the mandibular base in the canine region. The inclination of the canines adapts to the transverse relation of the apical areas. 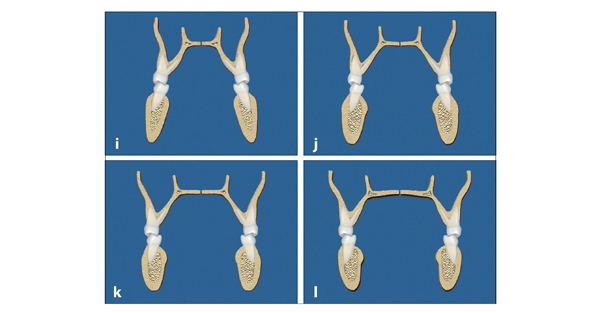 Fig 9-11 (cont) (i to l) The adaptation in width of the maxilla to the width of the mandible is limited. The inclination of the molars depends on the transverse relationship of the apical areas, which varies greatly. The dentoalveolar compensatory mechanism is based on the reconstruction and adaptation of the alveolar processes. If the discrepancy in position of the opposing apical ar/>

Tags: Development of the Human Dentition
Jan 4, 2015 | Posted by mrzezo in General Dentistry | Comments Off on 9 Growth and Development of the Facial Complex: Interactions Among the Dentition, Skeleton, and Function
Premium Wordpress Themes by UFO Themes
WordPress theme by UFO themes