3 The First Transitional Period: Transition of Incisors and Emergence of First Permanent Molars

The First Transitional Period: Transition of Incisors and Emergence of First Permanent Molars

Emergence of the First Permanent Molars

Prior to the transition of the incisors, usually at 6 years of age, the first permanent molars emerge: first in the mandible, then in the maxilla. In the preceding years, adequate room was available in the jaws for their development. Continuing posterior growth provided sufficient space for them in the dental arch. They erupt almost perpendicular to the occlusal plane, as the deciduous molars did before them. After their emergence, there is often a surplus of space in the dental arch. Diastemata distal to the second deciduous molars can remain for some time. 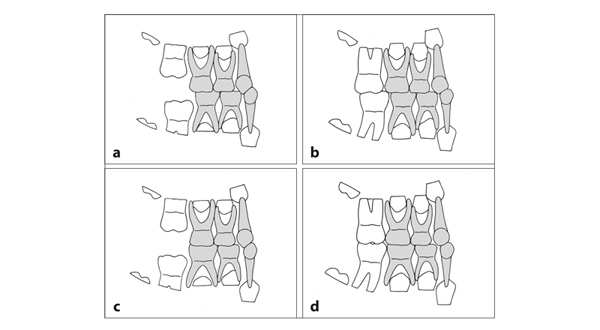 Fig 3-1 Effect of mesiodistal dimensions of second deciduous molars on the occlusion of the first permanent molars. (a) In situations of opposing second deciduous molars with equal mesiodistal crown dimensions, the terminal plane of the deciduous dentition has a mesial step. (b) After emergence, the first permanent molars can arrive at optimal intercuspation immediately. (c) However, in most cases the mandibular second deciduous molar is broader than the opposing maxillary tooth,1 and as a result the terminal plane is flush. (d) Consequently, the first permanent molars erupt with inadequate intercuspation because the cusps are right on top of each other mesiodistally (ie, end-to-end occlusion). However, they do attain an acceptable buccolingual occlusion by means of the cone-funnel mechanism. The maxillary molar is positioned slightly more to the buccal than the opposing mandibular tooth. 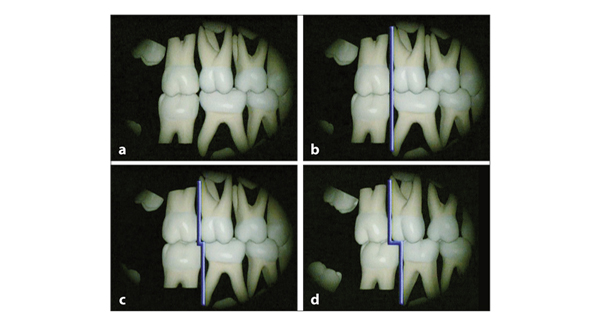 Transition of the Incisors 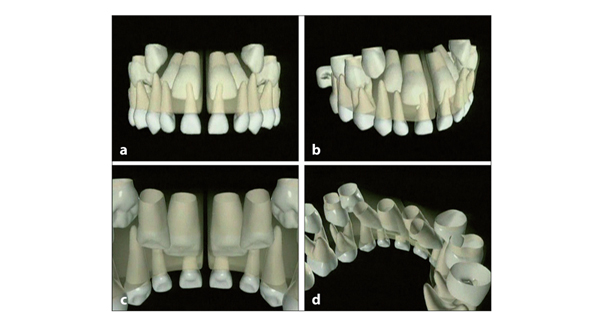 Fig 3-3 Arrangement of maxillary teeth within the surrounding bony structures, some time after the start of eruption of the maxillary central permanent incisors. (a to d) Initially, the permanent incisors are arranged within the jaws in such a way that the available space is used maximally. The median suture does not permit proximity of the central permanent incisors. However, their mesial aspects are parallel and close to the median suture, which makes optimal use of the available space. Consequently, these teeth are distally angulated, erupt in a divergent way, and emerge with a central diastema.

Unlike the deciduous incisors, the permanent incisors erupt in the direction in which they are formed.3,4 Maxillary lateral permanent incisors emerge more labially than the central incisors. After emergence, their labial inclination is reduced through pressure exerted by the lips. In the mandible, the lateral permanent incisors emerge slightly lingual to the dental arch. Subsequently, they migrate labially into alignment with the adjacent teeth through pressure exerted by the tongue. Indeed, the tongue, lips, and cheeks play a major role in the positioning of the teeth. However, local space conditions in the dental arch have the most dominant effect.

The transition of the incisors lasts almost 3 years, measured from the first associated changes in the deciduous dental arch until the complete eruption of all permanent incisors. The loss of the central deciduous incisors and eruption of their successors is illustrated in Fig 3-4. The second deciduous molars and the first permanent molars are also shown. The changes in relation to the tongue and lips from the complete deciduous dentition stage until adulthood are presented in Fig 3-5. 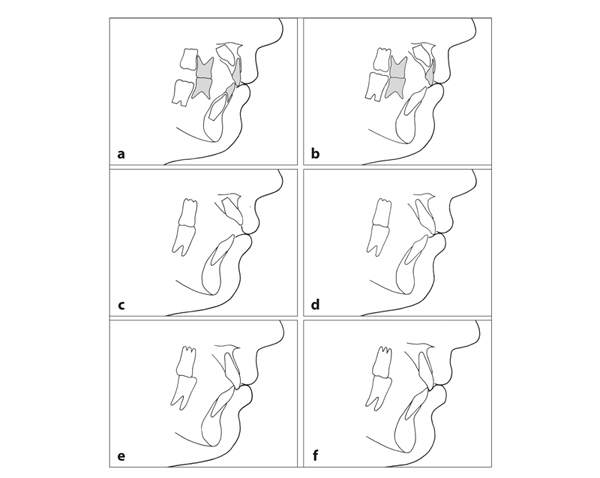 Fig 3-4 Changes in the incisor and molar regions from the complete deciduous dentition stage to adulthood. (a) The deciduous incisors are oriented perpendicular to the occlusal plane. The permanent incisors are located lingually to their predecessors and are labially inclined. (b) First the mandibular first permanent molar emerges, then the mandibular central incisor. The maxillary central permanent incisor emerges some weeks after the loss of its predecessor. (c) In the meantime, the maxillary first permanent molar has emerged. (d) The incisors continue to erupt until contact is reached. (e) The lower lip touches the incisal margin of the maxillary central incisor and covers 1 to 3 mm of its labial surface. (f) Continuing jaw growth and increase of the pressure exerted by the perioral musculature result in a more upright position of the incisors in the adult. 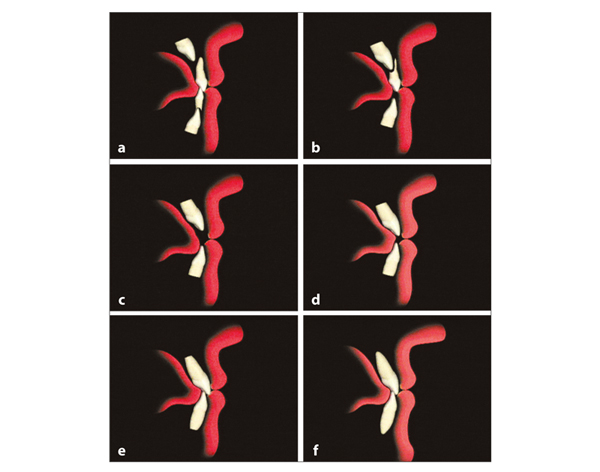 The most common mode of transition of incisors (ie, in a medium anterior section of the apical area) is illustrated in Fig 3-6. The mandibular central deciduous incisors are the first to be lost. Some weeks later their successors emerge, and the overlapping of the lateral incisors reduces. The proximity of the distoincisal corners of the maxillary central permanent incisors to the mesial aspects of the roots of the lateral deciduous incisors causes the latter to migrate distally. This leads to a reduction of the diastemata mesial to the maxillary deciduous canines and to more space for the central permanent incisors. With their further eruption, the deciduous canines migrate distally and buccally. 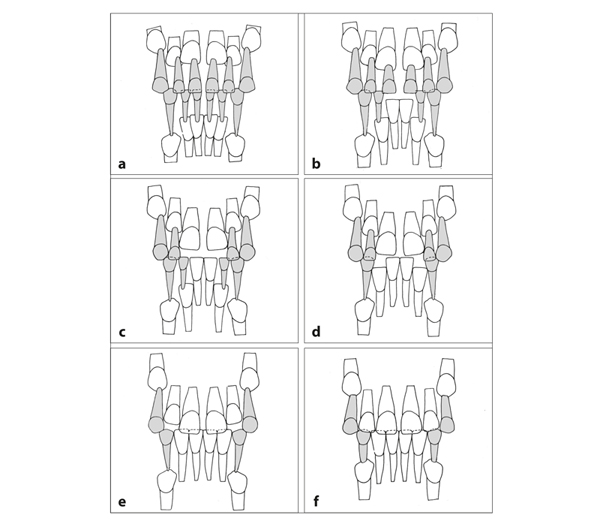 In the mandible, the distoincisal corners of the erupting lateral permanent incisors are in close proximity to the roots of the deciduous canines, which move distally and buccally. Due to the fact that the distal displacement of the deciduous canines occurs in both jaws at about the same time, the increase in intercanine distance usually happens simultaneously.10–15

The modes of transition described above occur when some extra space is needed for adequate eruption and arrangement in the dental arch (ie, a medium anterior section of the apical area). This development is illustrated for the mandible in Fig 3-7, for the maxilla in Fig 3-8, and for both jaws in Fig 3-9. 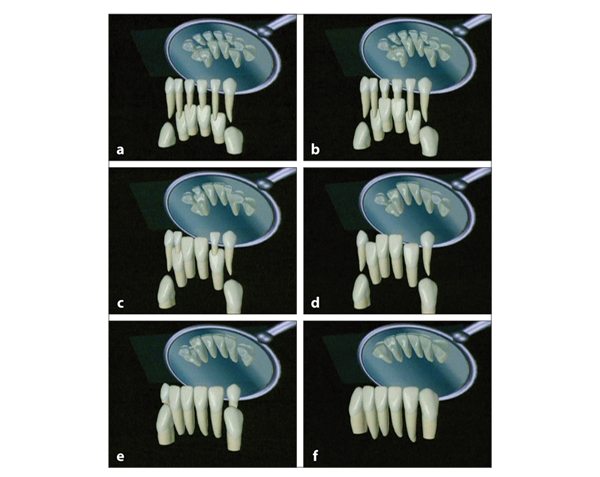 Tags: Development of the Human Dentition
Jan 4, 2015 | Posted by mrzezo in General Dentistry | Comments Off on 3 The First Transitional Period: Transition of Incisors and Emergence of First Permanent Molars
Premium Wordpress Themes by UFO Themes
WordPress theme by UFO themes